Like a Fine Wine, Beck Gets Better with Age 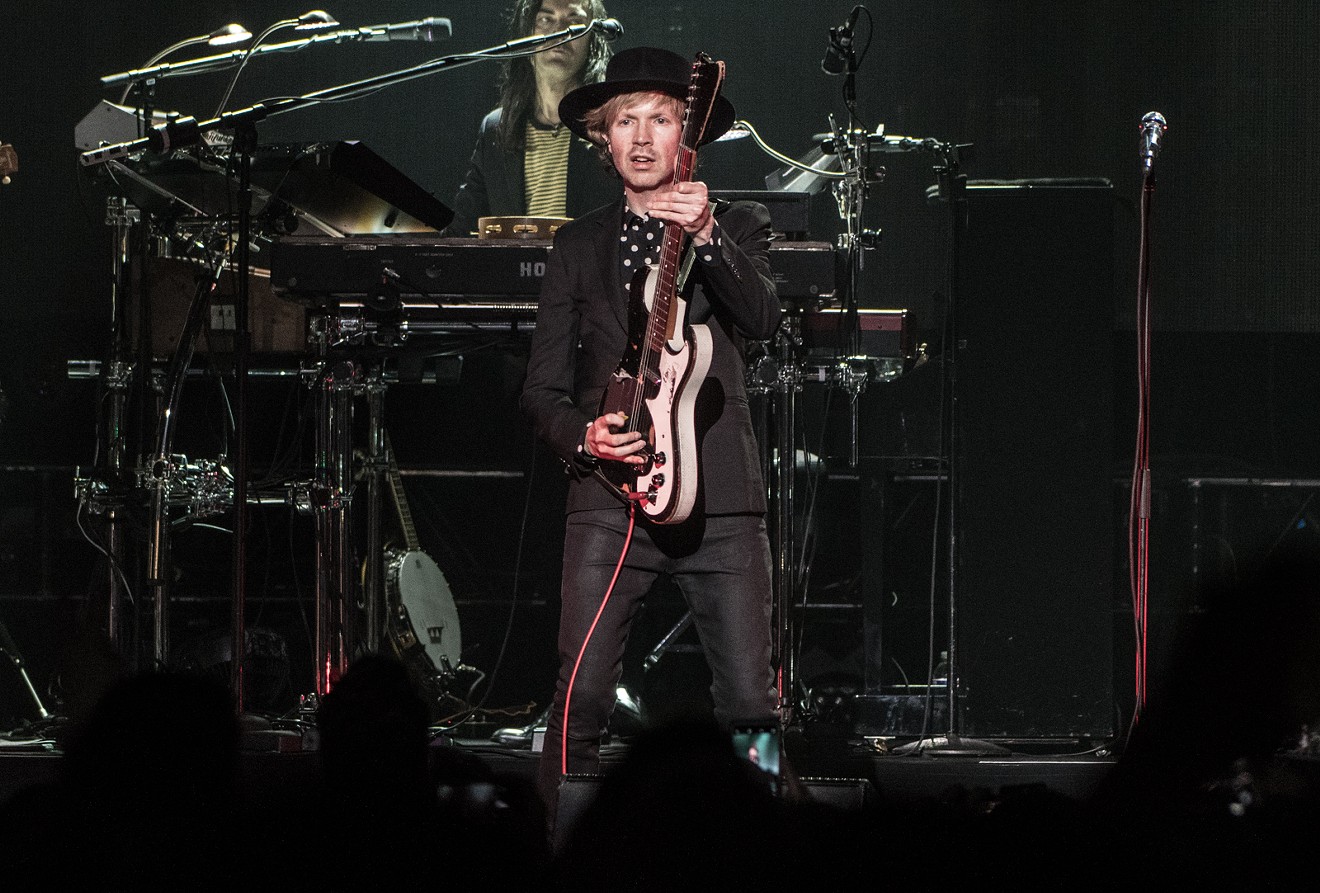 Whether it was the eclectic set list slipping easily among moods, albums and moments in his career, or the singer-songwriter’s repeated remembrances of past North Texas appearances, the weight of years seemed omnipresent.

Perhaps that’s merely a strong inference from someone who has spent 20 years listening to Beck’s music and who stood on a cement floor inside The Pavilion at the Toyota Music Factory amid an appreciative, sold-out crowd, watching an artist who broke through nearly a quarter-century ago.

Beck Hansen is 47 now and doesn’t appear to have aged appreciably (notwithstanding the occasional unforgiving close-up in high-def) in the interim between dominating MTV with his decade-defining Dadaist clip for “Loser” and the gently trippy Technicolor cuts on his latest LP, Colors, last year’s superb, rejuvenating foray into full-blown pop.

The roughly 100-minute set, which unfolded on a spare stage backed by a video screen projecting all manner of peculiar visuals, careened from classics to new material, with the occasional detour into music from others’ catalogs.

Seven band members, all of whom breathed life into the singer-songwriter’s famously dense compositions, backed Beck. The man himself alternated between electric and acoustic guitar, often forgoing any instruments at all to roam the stage and whip the room into something resembling wildness.

The opening five songs made as strong a case as any for Beck’s iconic status for those of us who came of age in the late '90s and early '00s, when his left-field music saturated the airwaves. Kicking off with the grinding, glorious “Devils Haircut,” he spun into “Black Tambourine,” “The New Pollution,” “Que Onda Guero” and “Mixed Bizness,” a dazzling showcase for his particular strain of boundary-blind alt-rock.

But as he launched into Colors’ title track, Beck found another gear and seemed to engage in a way he hadn’t to that point. Maybe it was the material’s freshness — six of Colors’ 10 tracks, including the psychedelic “Wow” and the euphoric “I’m So Free,” made their way into the set list Friday — but the sleek, concise pop songs visibly energized him.

Beck might also have drawn inspiration from the simple fact that he doesn’t play North Texas terribly often, a reality he acknowledged early Friday.

“It’s been a long time — much too long,” he said from the stage as “Devil’s Haircut” concluded. “We’re going to try and make up for lost time tonight.”

Friday’s sold-out concert was Beck’s first trip through town in four years, following his 2014 headlining slot at Edgefest 24 in Frisco.

Mike Brooks
You’d have to go back a dozen years, to 2006, to find the last time Beck played Dallas proper — a spontaneous, rowdy club gig at the dearly departed Gypsy Tea Room — which might explain why the Los Angeles native kept name-checking the Bronco Bowl. (He last played that cherished stage almost 20 years ago, in January 2000.)

“That was a party,” Beck observed after he and the band brought “Loser” to a crashing close. “It’s making me feel like I need to come back this way more often — taking me back to the days of the Bronco Bowl.” (He revisited the topic a few tunes later, weaving an untitled, improvised ditty about the venue — “It was just plain ol’ rock and roll at the Bronco Bowl,” he plaintively sang — into a medley highlighting two Jimmie Rodgers classics, “Waitin’ for a Train” and “Peach Picking Time in Georgia,” and his own “Everybody’s Got to Learn Sometime.”)

That faint, pensive undertow never subsided throughout Beck’s performance, making the moments when the musicians cut loose — the main set finale of “Dreams” into “Wow” into “Up All Night” into “E-Pro” was a sustained stretch of unfettered joy — that much more potent.

Gazing around the room — my back feeling the twinge of a few hours standing on cement — and seeing the graying beards and the dancing not quite so aerobic as it once was, allowed one to fully understand what Beck’s music meant to those of us gathered on this beautiful spring evening, eagerly reveling in memories but fully present to enjoy the music unfolding before us.

There’s an argument to be made that those who once filled the Gypsy Tea Room or the Bronco Bowl by night now fill the strip malls, carpool lanes and Super Targets of the suburbs by day. These were the indefatigable denizens of Deep Ellum thrashing through the heart of downtown Dallas; now they call Lakewood or Plano or Irving home. Just as they have aged, Beck has grown older, too. Now, performer and audience alike meet where they are — that distractingly comfortable way station known as middle age.

To stand inside the Pavilion at the Toyota Music Factory Friday and listen to a roomful of fans shout along to “Loser,” sway to the elegiac “Lost Cause” or react viscerally to any of Beck’s unimpeachable hits from two decades ago was to see, hear and feel nostalgia made manifest in real time.

It was a night tinged with melancholy, yes, but mostly, everyone in attendance yearned to get free, get lost and get back to a time in life where the only responsibilities were making sure you weren’t too hung over to function the next morning. For a little while, anyway, time seemed held at bay.