Coldplay's Chris Martin appears to levitate before a massive audience at the Cotton Bowl on Friday, May 6, 2022. Andrew Sherman
The scale of it all was striking.

To watch a band that built its career, at least early on, with sensitive, relatively small tunes, take those deeply felt, finely wrought works, shot through with an acute interiority, and turn them into maximalist, synapse-frying spectacles capable of making an estimated crowd of 60,000 people move almost as one was to marvel at the eternal malleability of pop music.

Coldplay kicked off the first U.S. leg of its Music of the Spheres world tour Friday at the Cotton Bowl, returning to North Texas for the first time in six years and one-upping its appearance at AT&T Stadium for sheer visceral impact.

Touring behind its ninth studio album, Music of the Spheres, Coldplay spent roughly two hours working through all phases of its sound. Coldplay made a vast space feel almost cozy.
Andrew Sherman
Chris Martin, Will Champion, Guy Berryman and Jonny Buckland made such a vast space feel almost cozy, treating the grand spectacle with a casualness that was downright disarming. Martin, in the opening moments of “Sky Full of Stars,” even stopped everything to implore the audience to put down its phones and simply revel in the moment: “You’re a Top 10 audience already,” a sweat-drenched Martin said. “Life is short — who knows how many more times we’ll come to Dallas? Let’s be in it together.”

You name a special effect, and Friday’s show had it: Fireworks, lasers, smoke, confetti, a disco ball, flames, costumes, puppets — Coldplay threw everything and the kitchen sink at the crowd, its wrists adorned with the band’s now-signature LED wristbands, which pulsed and strobed and glowed in the darkness, visually unifying the mass of humanity piled into Fair Park. 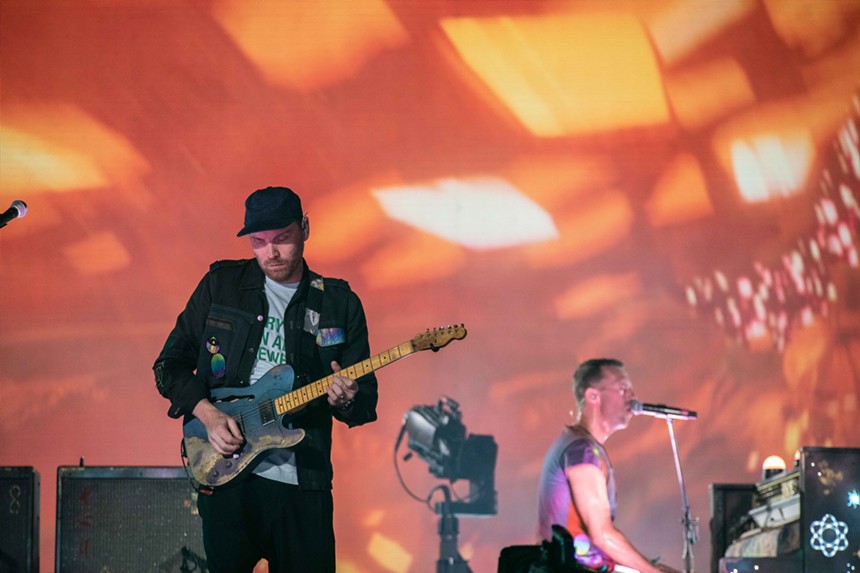 Coldplay's Johnny Buckland at the Cotton Bowl
Andrew Sherman
(Speaking of which, the parking situation — surprising absolutely no one who drove — was absolutely wretched, so much so that the band delayed the scheduled start time of 8:30 p.m. by about 45 minutes, to allow the hellish snarl around the venue time to unwind: “Sorry about all the traffic and shit you had to go through to get here,” Martin said, not long after taking the stage.)

Kicking off with “Higher Power,” the thunderous, vivid sight of fireworks detonating during the chorus, Coldplay spun from one hit to another — situated in an end zone, with a stage spanning the width of the stadium, anchored by huge, circular video screens on either side and with a runway stretching deep into the general admission floor crowd .

The band, sounding crisp, fairly bludgeoned the audience with a string of hits — “Adventure of a Lifetime” into “Paradise” into “Charlie Brown” into “The Scientist” — and sustained a pace that rarely slackened until the final notes of “Humankind” and “Biutyful.” 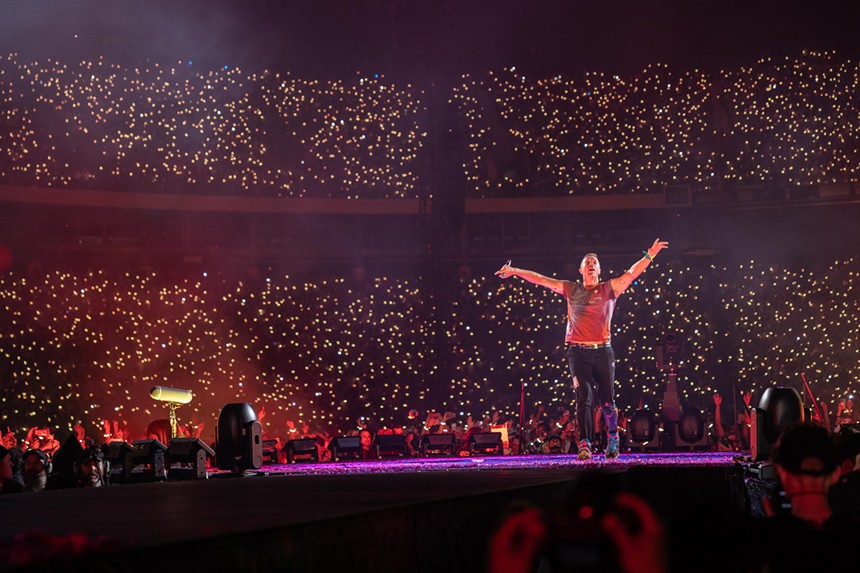 Chris Martin asked fans to put down their phones and share the moment.
Andrew Sherman
Hand in hand with the sensory overload was the group’s focus on sustainability. On one hand, it makes sense — a globally famous pop band with the reach and visibility of Coldplay, pulling nearly 100,000 people into a single space, should probably feel some responsibility for its environmental footprint — but on the other, the message began to feel like being cornered at a party by a member of Greenpeace.

The aforementioned LED wristbands? Recycled plastic! The cups at the concession stand? Recycled aluminum! A portion of the ticket proceeds? Earmarked for a variety of green initiatives around the world!

Such an aggressive approach is admirable. Coldplay has survived any number of pop music convulsions over the last two decades to remain one of the biggest bands in the world. Its tender, melodic songs, like “In My Place” or “Sparks,” can fit snugly alongside widescreen epics like “Fix You,” “Clocks” or “A Sky Full of Stars,” all underscored by an arsenal of mind-blowing visuals. 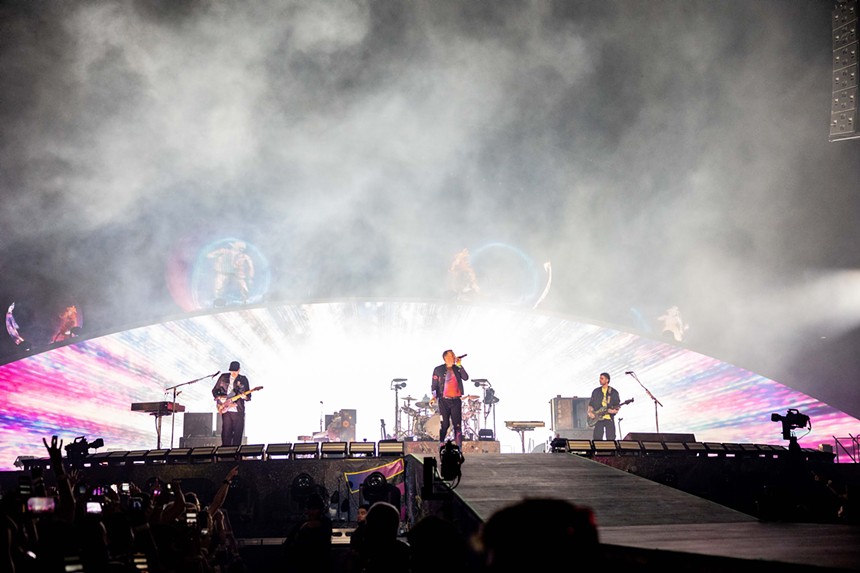 Coldplay drew an estimated 60,000 fans to Fair Park.
Andrew Sherman
The quartet has retained the core of what made them famous and compelling all those years ago — a profound vulnerability anchored by indelible melodies — and expanded upon it, steadily and determinedly broadening their appeal to such a scale as to be overwhelming.

To stand inside the Cotton Bowl Friday night was to be reminded anew of Coldplay’s primacy among pop acts. Precious few are the bands who can make two hours feel like 10 minutes; fewer still are those who can make a stadium — sprawling, mammoth, vast as the night sky above it — feel like an intimate gathering of friends. 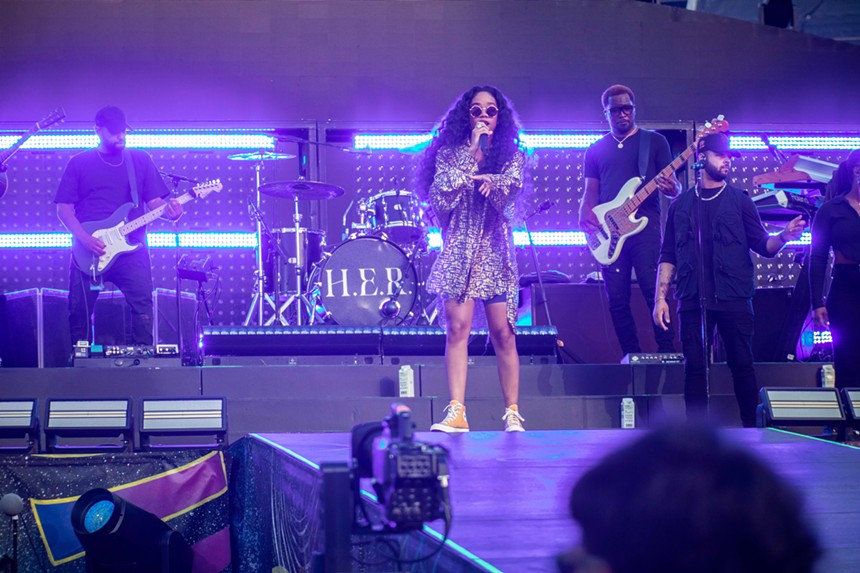 H.E.R. looked like a stadium headliner in waiting.
Andrew Sherman
What I saw of H.E.R.’s opening set only made me kick myself yet again for missing out on her headlining set in Grand Prairie last year. Her ease in such a large space was infectious, as she moved from drums to electric guitar, working the long runway in her yellow high-tops. Whether with someone else’s song (“Are You Gonna Go My Way,” reprising her rip-snorting Grammys performance) or her own (“We Made It”), H.E.R. looked for all the world like a stadium headliner in waiting.
KEEP THE DALLAS OBSERVER FREE... Since we started the Dallas Observer, it has been defined as the free, independent voice of Dallas, and we'd like to keep it that way. With local media under siege, it's more important than ever for us to rally support behind funding our local journalism. You can help by participating in our "I Support" program, allowing us to keep offering readers access to our incisive coverage of local news, food and culture with no paywalls.
Make a one-time donation today for as little as $1.