Deftones Made a Breathtaking Return to North Texas 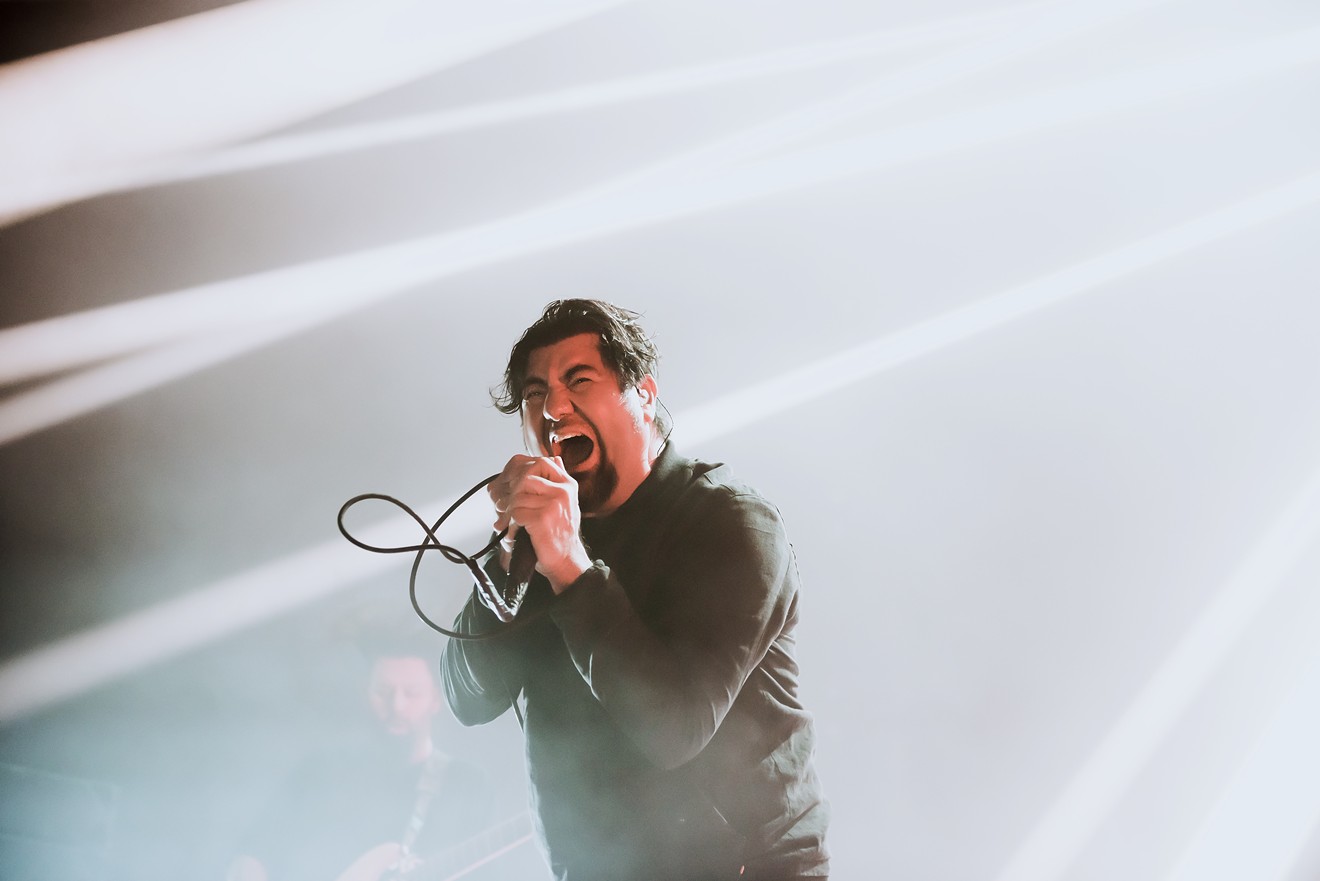 Chino Moreno takes center stage The Pavilion at Toyota Music Factory, where his band Deftones rocked a sold-out house Monday night. Natalie Perez
Chino Moreno’s nü-metal band has stood the test of time, and 25 years after releasing their debut album, Deftones was set to hit the road to promote its newest release Ohms back in 2020. The momentum and buzz they’ve conjured up album after album came to a halt when their tour was postponed twice over the past two years because of the pandemic. Fresh off a couple of Grammy noms for Best Rock Performance and Best Metal Performance, the band was finally able to tour earlier this year with special guests Vowws and Gojira to promote Ohms, Deftones' ninth album, stopping in North Texas this week for the first time since 2017.

For fans dressed in sea of black band T-shirts and packed into The Pavilion at Toyota Music Factory — some shirts fresh from the merch table stamped with this tour’s slogan, “Goon Squad,” and some well-worn and loved from tours passed — the performance was worth the wait.

The band made up for lost time with electrifying energy and hastily transitioned from one song to the next. Heavy strobe lighting, surreal projections on levitating panels and an impressive, hoisted LED light fixture provided the perfect backdrop for the floor-rumbling performance. Led by Moreno’s incredible vocal control, the band ripped through quieter, more tender moments with splintering, yet accessible, screeches. 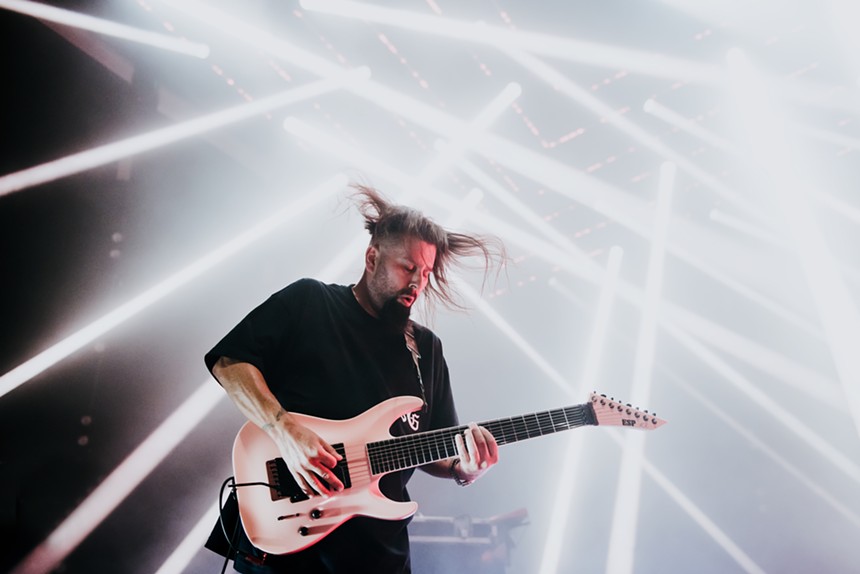 Stephen Carpenter's shredding amped up the electricity at the Deftones' show in Irving.
Natalie Perez
As seasoned vets, the band’s chemistry was on display stronger than ever despite the departure of bassist Sergio Vega earlier this year. Electrifying waves of syncopated rhythms were crafted by Moreno’s vocals and Stephen Carpenter’s steady shredding, anchored by Abe Cunningham’s drumming and Frank Delgado on the keys.

Deftones' fans run deep and way back, and the band took care to make sure that their set list reflected their supporters’ devotion over the years. They impressively pulled songs from all nine studio albums, starting off with lead track “Genesis” from Ohms and wrapping up the show by transporting the crowd back 26 years with “Engine No. 9” from the 1995 debut studio album, Adrenaline. Fan favorites “Change (House of Flies),” “Be Quiet and Drive (Far Away),” and “Diamond Eyes” had the crowd head banging along to every word.

Abe Cunningham of the Deftones
Natalie Perez
What’s more impressive than pulling a sold-out crowd on a Monday night is pulling a sold-out crowd of fans of all ages. Thirty years in, Deftones is evolving while still appealing to fans who resonated with their sound many years ago. Nearly all albums were accounted for, from Adrenaline to Ohms, both on the set list and on black band shirts in the crowd. 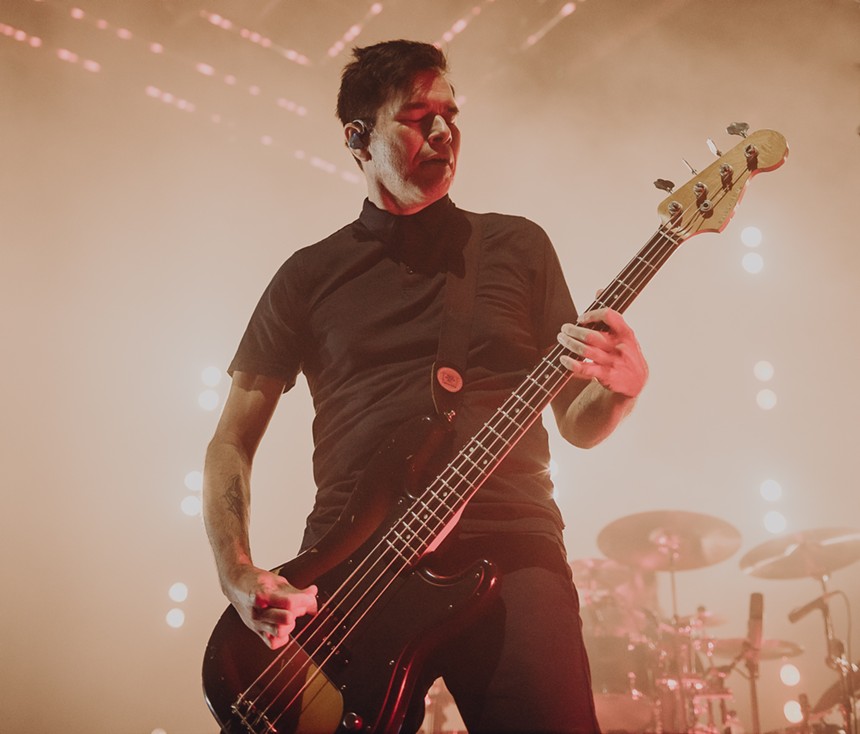 Fred Sablan, former bassist for Marilyn Manson, stepped in after the departure of longtime Deftones bassist Sergio Vega,
Natalie Perez
KEEP THE DALLAS OBSERVER FREE... Since we started the Dallas Observer, it has been defined as the free, independent voice of Dallas, and we'd like to keep it that way. With local media under siege, it's more important than ever for us to rally support behind funding our local journalism. You can help by participating in our "I Support" program, allowing us to keep offering readers access to our incisive coverage of local news, food and culture with no paywalls.
Make a one-time donation today for as little as $1.