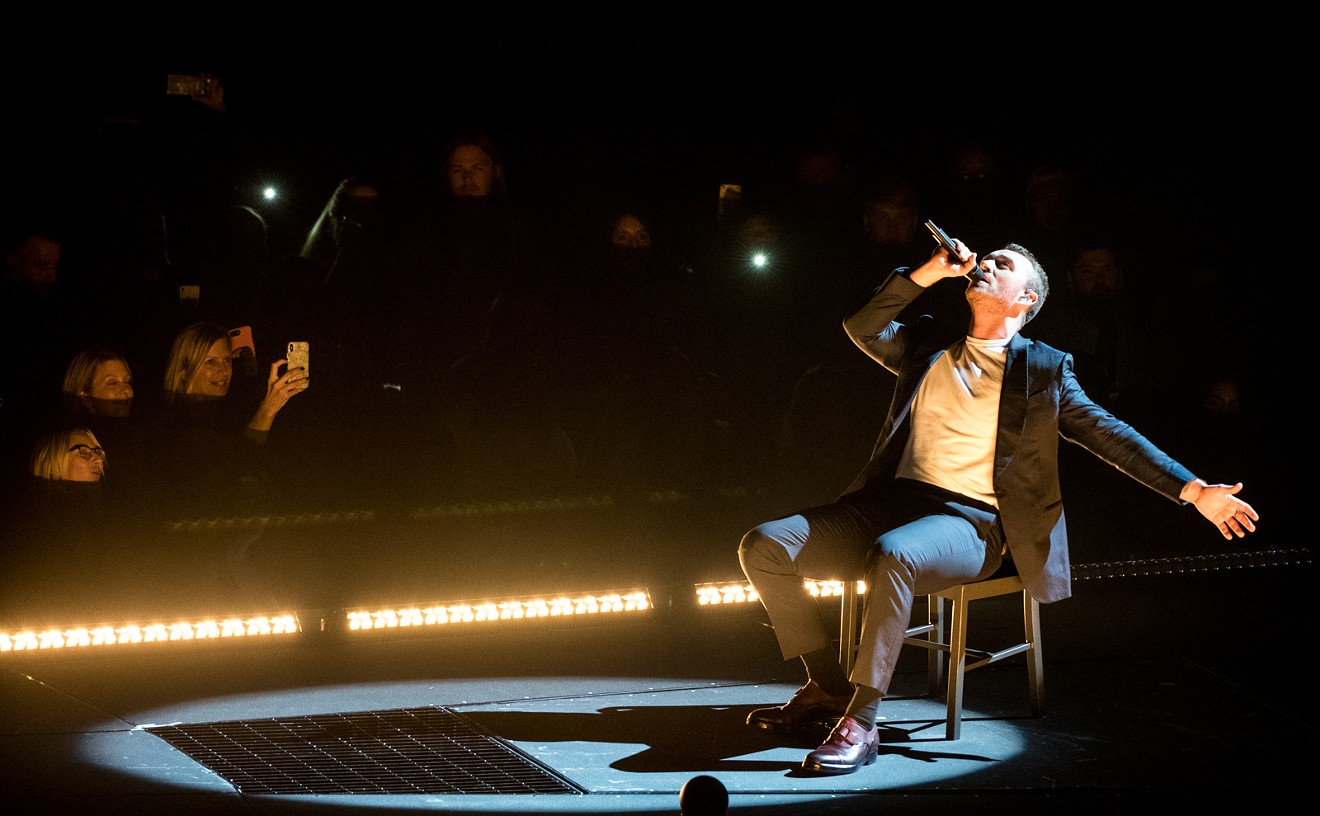 As the sold-out crowd filed into the American Airlines Center on Friday, there were the weighty quotations displayed on screens flanking the angular stage, which stretched out into the middle of the floor.

Settling into your seat, you could ponder this, from poet Rupi Kaur: “What is stronger than the human heart, which shatters over and over, and still lives?”

Or this richly elegiac extract from author Michael Cunningham: “Venture too far for love, you tell yourself, and you renounce citizenship in the country you’ve made for yourself. You just end up sailing from port to port.”

There were several such selections from the likes of Evelyn Waugh, Frank O’Hara, Stephen Hawking and Joni Mitchell. Before a note had been played, it seemed as if this was going to be a night when all in attendance got thoroughly up in their feelings.

So imagine the pleasant sense of shock when it became clear — first from the audience’s visceral elation and second from Sam Smith — that this stop on his global The Thrill of It All tour would indeed be emotionally charged but with joy rather than sorrow.

It was like bracing for a blow but receiving a bear hug instead.

The 26-year-old British pop superstar, touring behind his 2017 sophomore album, The Thrill of It All, doesn’t shy away from magnificently rendered moping — if heartbreak had a sound in the late 2010s, it was Smith’s keening tenor — but his default setting Friday night bordered upon giddiness.

It did not hurt that the jam-packed room was electrified by his presence from the moment he materialized from beneath the stage, seated and singing the opening number, “Burning.”

The screams pealed like thunder, equal in volume only to the singalongs erupting throughout the 105-minute set.

Friday was Smith’s first DFW stop in almost three years after a sold-out 2015 turn at Grand Prairie’s Verizon Theatre, but he was greeted as if he’d been absent a decade.

“The crowd right now is fucking amazing,” observed a beaming Smith. “I can feel your energy; this is insane!”

The good cheer was almost overpowering, as even the heavier moments — Smith’s dramatically staged rendition of “Writing’s on the Wall,” his James Bond theme or the simmering vulnerability of “Say It First” — vibrated with a palpable undercurrent of euphoria. This tended to undercut the material’s brooding nature, but Smith understands his lachrymose limits.

“Leave any sadness or heartbreak you’re feeling at the door,” he instructed the audience. “It’s a Friday night — let’s sing and dance and have fun.”

Slipping free of expectations for endless morose anthems might lose a few fans, but embracing a sense of balance between life’s best and worst moments is far more sustainable over the long haul.

Within those merrier moments Friday — and there were many, from the soaring “Nirvana” to the stomping “Like I Can” to the stirring “HIM,” which culminated in a riot of rainbow light and Smith exclaiming “I am a proud gay man!” — Smith showcased his sterling band, a dexterous quintet augmented with a quartet of back-up singers, all of whom smoothly supported Smith’s full, muscular and vibrant pipes.

He’s grown exponentially more comfortable than he was nearly four years ago onstage at the House of Blues, where he rarely strayed from the mic stand. (That October 2014 gig must’ve left quite the impression on Smith, as he spontaneously referred to it twice during his AAC appearance.)

On Friday night, Smith, whose mother was in attendance, was all smiles, appearing to glow from within as he made the enormous room seem intimate and deftly weaving together the strands of his career. Touching upon his collaborations with Disclosure (“Latch” and “Omen” were featured) and incorporating a cover of “His Eye Is on the Sparrow” to gracefully acknowledge his profound debt to gospel, Smith moved with the confidence of an artist who knows where he wants to go.

The cumulative effect was best captured by the song saved for the very end of the night: “Pray,” the poignant, stand-out track from The Thrill of It All.

Earlier, Smith had made plain his goal for the night: “I didn’t want you to leave feeling like crap, so we have been working so hard and making sure you leave this arena feeling happy and feeling good and full of love.”

If all anyone knew of Smith was his tear-stained balladry — “Stay With Me,” which pried loose the sort of primal roar from the audience Friday that was both terrifying and totally understandable, is not known for boosting dopamine levels — such a sentiment might seem like strained pandering.

That hope — a good feeling, something so agonizingly rare in this moment of cynicism, ugliness and division — supplanted any sense of despair Smith might conjure elsewhere. It’s easy to give into the low moments, but Friday night, surrounded by like-minded strangers and led by Smith’s cheerful determination to forge ahead through the good times and bad alike, any sense of hopelessness melted away into something resembling relief — an act of arena-sized catharsis.

Cam will be back in Dallas in October.
Mike Brooks

Cam, the night’s opener, was terrific in her short time onstage — indeed, her set seemed almost too brief. (Not to worry, the Nashville-based singer-songwriter plugged an October return to Dallas during her Friday appearance.)

Cam, who co-wrote “Palace” with Smith, finished with her hit, “Burning House,” but not before she made an observation which had its echoes in Smith’s set.

“It makes me so happy you can tell your truth, no matter what genre you’re in,” she said.
KEEP THE DALLAS OBSERVER FREE... Since we started the Dallas Observer, it has been defined as the free, independent voice of Dallas, and we'd like to keep it that way. With local media under siege, it's more important than ever for us to rally support behind funding our local journalism. You can help by participating in our "I Support" program, allowing us to keep offering readers access to our incisive coverage of local news, food and culture with no paywalls.
Make a one-time donation today for as little as $1.