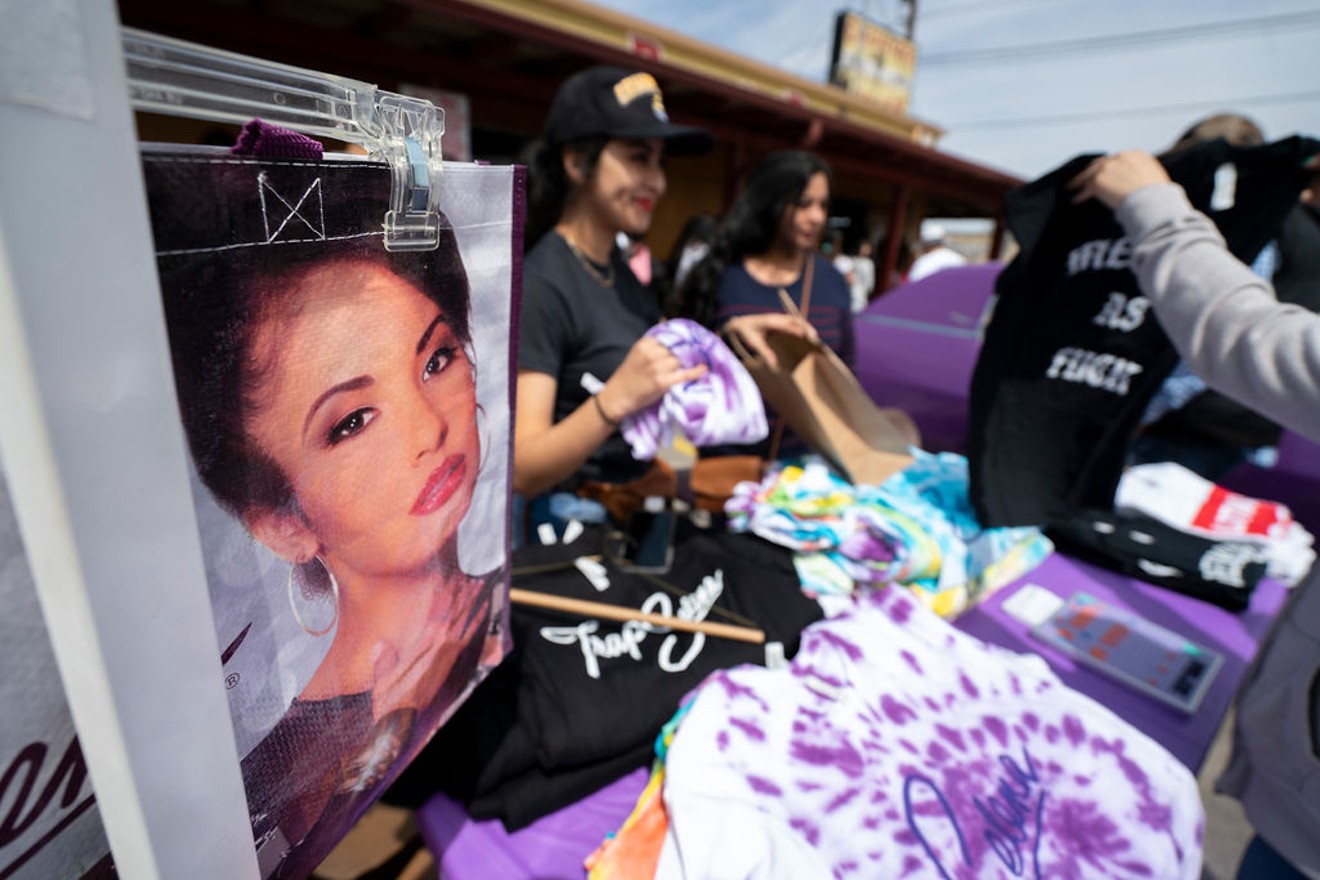 Fans can celebrate Selena's life with a brand-new song and album. Brian Maschino
It's hard to come to terms with the fact that it's been almost 30 years since the world said goodbye to the undisputed queen of Tejano music, Selena Quintanilla-Perez. Her music still has the same raw power and influence it had on other musicians and on her countless fans when she died in 1995, after the president of her fan club and manager of several of Selena's boutiques, Yolanda Saldívar, shot her outside of a Days Inn in Corpus Christi. Selena later died at a nearby hospital at the age of 23.

It almost feels like Selena is still with us in some form or another. Her family has certainly done everything in its power to prolong the singer's memory and influence. Their latest effort has produced a brand-new album of Selena's songs that have never been released or heard by anyone except the people around her.

Warner Music and Q Productions, the Corpus Christi-based music and film studio run by Selena's father, Abraham Quintanilla, announced the upcoming release of Moonchild Mixes with 12 tracks of new mixes of new and classic Selena songs. The full album will be released on digital platforms on Aug. 26.

On Friday, the official YouTube channel for Selena released the first single for the new album, "Como Te Quiero Yo a Ti" ("Like How I Love You").  Quintanilla first announced his daughter's posthumous album back in March in an online interview with Latin Groove News. The first single was recorded when Selena was just 13. Selena's brother, A.B. Quintanilla, produced the album.

"I said right after she passed away that I was gonna try to keep her memory alive through her music and I think we've done that," Abraham said.

"Como Te Quiero Yo a Ti" picks up right where Selena's tragically short life ended. It opens with sweeping instrumental tracks until the singer's powerful voice takes over to deliver sweet, soft and stirring sounds that can touch souls no matter what language they speak.

Selena's siblings A.B. and Suzette Quintanilla also talked about the new album on ABC's Good Morning America last Friday, noting that it took more than a year to get the new tracks ready for a proper release.

"There was a lot of obstacles to overcome," A.B. said. "Everything was recorded on vinyl so we had to kind of fuse the old school ways with the new school ways, cleaning Selena's vocals, put her on timing, and we also pitched her vocal down a hair to make her sound a little bit more mature."

"It truly feels like she truly went into the studio again and recorded it," Suzette added.

Selena's connection to the Dallas music scene can be heard and seen all over the city with wall murals painted in buildings in Deep Ellum and outside the Top Ten Records store and Country Burger in Oak Cliff. Selena tribute concerts and gatherings attract thousands of people every year on and around her birthday (July 22) and on the anniversary of her death (March 31).

A representative of Q Productions says the family is not granting any more interviews regarding the release of the new album.
KEEP THE DALLAS OBSERVER FREE... Since we started the Dallas Observer, it has been defined as the free, independent voice of Dallas, and we'd like to keep it that way. With local media under siege, it's more important than ever for us to rally support behind funding our local journalism. You can help by participating in our "I Support" program, allowing us to keep offering readers access to our incisive coverage of local news, food and culture with no paywalls.
Make a one-time donation today for as little as $1.