T-Pain Asks Why Dallas Won't F With Him 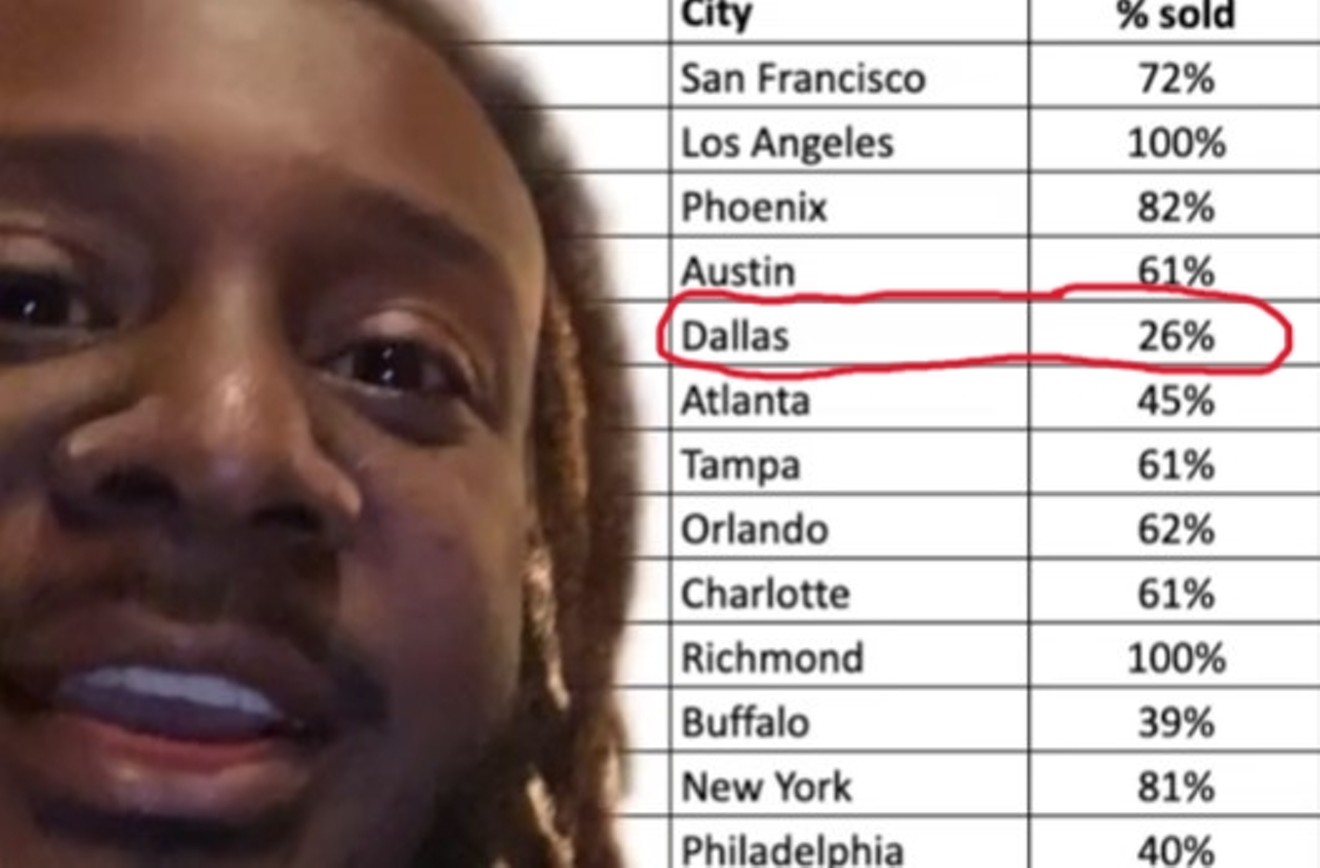 Rapper T-Pain took to Tiktok to call out the city of Dallas for not meeting his ticket quota for his May 18 show at The Factory in Deep Ellum. Screenshot from Tiktok
Filling any concert hall or arena is a challenge for any musician whether they're a Grammy Award-winning big shot or just some guy with a barstool, a keyboard and a dream.

After all, musicians aren't just asking their fans to come to their shows. They have to persuade people to pay good money for something that requires them to put on pants, leave the comfy confines of their house, brave brutal highway traffic and sit or (worse) stand patiently for the main act to begin.

Now imagine that you're rapper/autotune crooner T-Pain and you're asking people to do all of that EXCEPT the final step also involves traveling to Deep Ellum, a place where the prices for parking, drinking and sitting are on the same sliding scale as black market organs.

Someone should tell T-Pain maybe that's part of the reason why his sales are in a bit of a slump for his May 18 show at The Factory in Deep Ellum. The rest probably has to do with having enough left over to cover the city's climbing rent rates.

DALLAS WHATS GOIN ON DOWN THERE?!?! BUFFALO YOURE NEXT!!!

The artist jumped on his TikTok app last Saturday to show people a spreadsheet of the latest sales percentages for the stops on his "Road to Wiscansin" tour. Apparently, Dallas isn't pulling its weight.

"What the fuck Dallas?" T-Pain asks his followers on TikTok. "Dallas? What are y'all doing? Y'all don't fuck with me? 'Hey man, we fuck with you heavy in Dallas.' Really? What the shit, Dallas? What did I do? Let me know what I did."

Then, T-Pain tries to reason with our fair city in exactly the way you think an exasperated, out-of-towner would as soon as they hear the word "Dallas" or "Texas."

"I've wore cowboy hats many times," T-Pain says. "I used to raise horses. I feel like I'm part of the city. I've worn a cowboy hat or two, regular hat and Dallas Cowboys. What the fu ...?"

For the last goddamn time, WE DON'T WEAR COWBOY HATS! Anyone who wears a hat that's twice the circumference of their actual head is not from Dallas or has some kind of skin condition that requires shielding from bright sunlight. We don't ride horses because cars are much more efficient and widely used as transportation now. We don't say "Get a rope" when someone says "New York City" because that's technically a felony-level terroristic threat.

Hell, we only started wearing Dallas Cowboys hats because the season enders don't suck as much as they used to these past few years. Barely.

We hope T-Pain is gonna give Chicago the same level of shit for having the exact same sales percentage that his second show has at the House of Blues on June 9. And he better call them out with the same level of stereotypical sniping: by including at least one mention of something like long-form improv, "Da Bears" or how he used to be a wind farmer.
KEEP THE DALLAS OBSERVER FREE... Since we started the Dallas Observer, it has been defined as the free, independent voice of Dallas, and we'd like to keep it that way. With local media under siege, it's more important than ever for us to rally support behind funding our local journalism. You can help by participating in our "I Support" program, allowing us to keep offering readers access to our incisive coverage of local news, food and culture with no paywalls.
Make a one-time donation today for as little as $1.