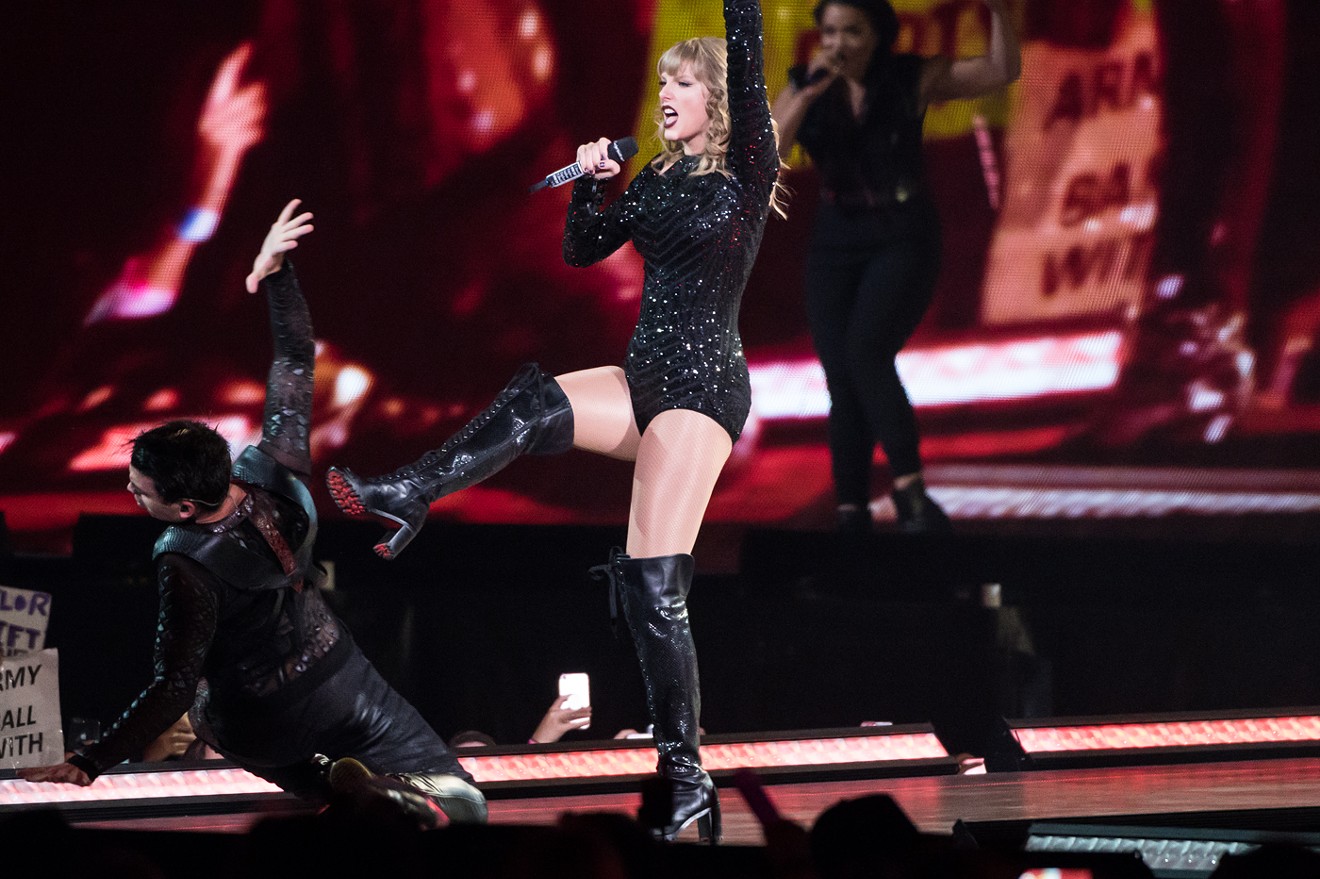 Taylor Swift's Netflix special was shot in North Texas. She played back-to-back shows in October at AT&T Stadium in Arlington, thrilling audiences of 105,002 on both nights. Mike Brooks


Not only was Dallas the last stop on Taylor Swift's Reputation Stadium Tour, it also served as the location of her highly anticipated Netflix concert special out today.

Shot completely in Dallas, Swift tells the audience during her Netflix special that her October date was the 30th show she played in DFW. And it was a groundbreaking show at that.

"This is the first tour," she begins. "Nobody has ever played back-to-back nights at this stadium before. Thank you guys."

Swift opened the show at AT&T Stadium with her thigh-high boots, black leotard and black hood, singing the album's first song, "...Ready For It."

Swift goes on to sing her massive hits from Reputation, including "Look What You Made Me Do," "Gorgeous" and others from previous albums, like "Shake It Off" and "Style," all while her tousled dirty-blonde hair and berry lipstick stayed perfectly in place for two straight hours.

During each concert on this tour, Swift played a different surprise song for fans. "All Too Well," a song from her fourth album, Red, was the song performed on the Netflix special, a song Swift tells the audience has had two different lives.

"It's weird because I feel like this song has two lives to it in my brain," she tells the audience. "In my brain, there's the life of this song where this song was borne out of catharsis and venting and trying to get over something and understand it and process it.

"And then there's the life where it went out in the world, and you turned this song into something completely different for me. You turned this song into a collage of memories of watching you scream the words to this song or seeing pictures you post to me of you having written the words of the song in your diary or you showing me your wrists and you have the tattoo of the lyrics of this song underneath your skin. And that is how you've changed the song 'All Too Well' for me."

While her 1989 tour special, released exclusively on Apple Music, included interviews from Swift in between songs, the Reputation special is a simple, straightforward concert. There are small effects added on some songs, like photos of her cats, Meredith and Olivia, appearing on-screen during the song "Gorgeous," but for the most part, it's the perfect replacement if you were unable to attend her show this go-around.

Filmmaker Paul Dugdale shot the special, and his recent work includes The Rolling Stones Olé Olé Olé! : A Trip Across Latin America and Paul McCartney Live at The Cavern Club 2018.

Taylor Swift Reputation Stadium Tour is now streaming on Netflix.
KEEP THE DALLAS OBSERVER FREE... Since we started the Dallas Observer, it has been defined as the free, independent voice of Dallas, and we'd like to keep it that way. With local media under siege, it's more important than ever for us to rally support behind funding our local journalism. You can help by participating in our "I Support" program, allowing us to keep offering readers access to our incisive coverage of local news, food and culture with no paywalls.
Make a one-time donation today for as little as $1.