Tears For Fears ruled the world at Tuesday night's Irving show. Andrew Sherman
As thundering storms swept through North Texas Tuesday evening, fans braved soaking streets and sidewalks to see Tears For Fears — in all their ’80s synth-pop glory — perform at The Pavilion at Toyota Music Factory in Irving. But under all the usual, polished hits was a stunning display of pride, that of a 40-year-old band showing off its latest work, and the combination of old and new flowed perfectly and effortlessly throughout the night.

“We brought a bit of English weather with us,” guitarist and co-vocalist Roland Orzabal said lightheartedly as he first spoke to the crowd for the evening. Save for a few dozen fans who arrived early enough to find standing room under the pavilion’s roof, those with lawn seat tickets were given refunds and sent away at the door due to the raging rains and wind outside, thus giving the concert, only the band's third stop on their world tour, an unexpected intimacy with a smaller audience.

Orzabal started off the set with “No Small Thing,” an acoustic-ballad-turned-symphonic-anthem from the band’s latest album, The Tipping Point, while black and white images of babies, horses, water, butterflies and other figures were projected behind the band. He strummed his bright red acoustic guitar under a spotlight as the crowd cheered and clapped, although the audience excitement didn’t kick into high gear until the crowd-pleasing third song of the night, "Everybody Wants To Rule The World." It was then that Orzabal’s sparkling guitar riffs first took center stage, sounding just as clear and lively as they do through a speaker at home. 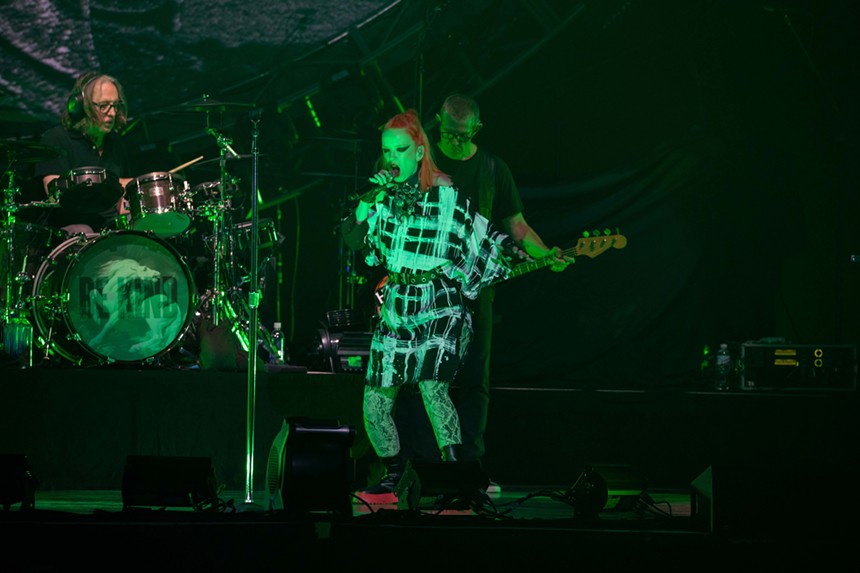 Garbage opened with fitting songs such as "Only Happy When It Rains" on Tuesday.
Andrew Sherman
The Tipping Point is a response to grief, tragedy and political turmoil in both Orzabal’s and co-founding member Curt Smith’s lives. When first speaking to the crowd, Orzabal nearly touched on his own personal tragedy, the loss of his first wife in 2017, but ended up instead going with a joke.

“[There have been] lots of tragedies all across the world. Me in particular. During lockdown, I ran out of hair dye,” the white-haired singer said. He later described the new track “Rivers of Mercy” as “written against the backdrop of anger and rage. It’s a song that tries to say how much each and everyone of us has a deep desire for peace.”

Destruction, not peace, however, was making headlines earlier in the day as several elementary school students in Uvalde were killed only hours before by a gunman. Opening act Garbage made a brief but sincere statement about the incident during their set.
click to enlarge

Tears For Fears ruled the world at Tuesday night's Irving show.
Andrew Sherman
“We won’t mention by name this moment in Texas history … but everybody in Garbage sends their love to all the children,” frontwoman Shirley Manson said, with obvious sympathy in her voice. Garbage continued on to play the hits they’re known for, including the befitting “Only Happy When It Rains.”

It wasn’t until after the fifth song in Tears For Fears' set, "Sowing the Seeds of Love," that Smith spoke to the crowd, followed by a string of new material, including the catchy and melodic “Long, Long, Long Time" with stunning vocals by Smith.

The night continued with songs from the band’s most revered albums, The Hurting, Songs From the Big Chair and Sowing the Seeds of Love, including “Mad World” and the band’s very first single, “Suffer The Children,” sung beautifully this night by backing vocalist Carina Round. During the repetitive lyric “So free her” in the band’s 1989 single “Woman In Chains” about the devastating effects of a toxic patriarchy, audience members raised their hands to the sky as if in church on a Sunday morning. But it was the last song of the first set, the enduring earworm “Head Over Heels,” that saw the biggest crowd reaction. After that, the encore proved fiery and ended with a thumping, fist pumping performance of "Shout."

Fingers danced on smartphone screens throughout the show, particularly during performances of the band’s new music, but there was certainly a sense of diversity among the fans. While it was obvious who only came for the hits, just as noticeable were the lifelong admirers eager to hear some of the deeper cuts performed live.

And some were just as excited to stand and sing along to the new material, although it was far less, as Orzabal half-jokingly noted: “I guess a lot of you haven’t bought the new album yet.” We doubt, though, that it will deter Tears For Fears from playing the music they want, the music they seem so proud of today. And rightly so. They’re a band that, even four decades after their commercial heyday, has maintained relevant songwriting and continues to create music that, we bet, will last another 40 years.
click to enlarge

Roland Orzabal has still got it.
Andrew Sherman
click to enlarge

Curt Smith played with his band Tears For Fears on Irving, despite the wild weather.
Andrew Sherman
KEEP THE DALLAS OBSERVER FREE... Since we started the Dallas Observer, it has been defined as the free, independent voice of Dallas, and we'd like to keep it that way. With local media under siege, it's more important than ever for us to rally support behind funding our local journalism. You can help by participating in our "I Support" program, allowing us to keep offering readers access to our incisive coverage of local news, food and culture with no paywalls.
Make a one-time donation today for as little as $1.