The 10 Best Concerts of the Week: Charley Crockett, Muna, Tame Impala and More 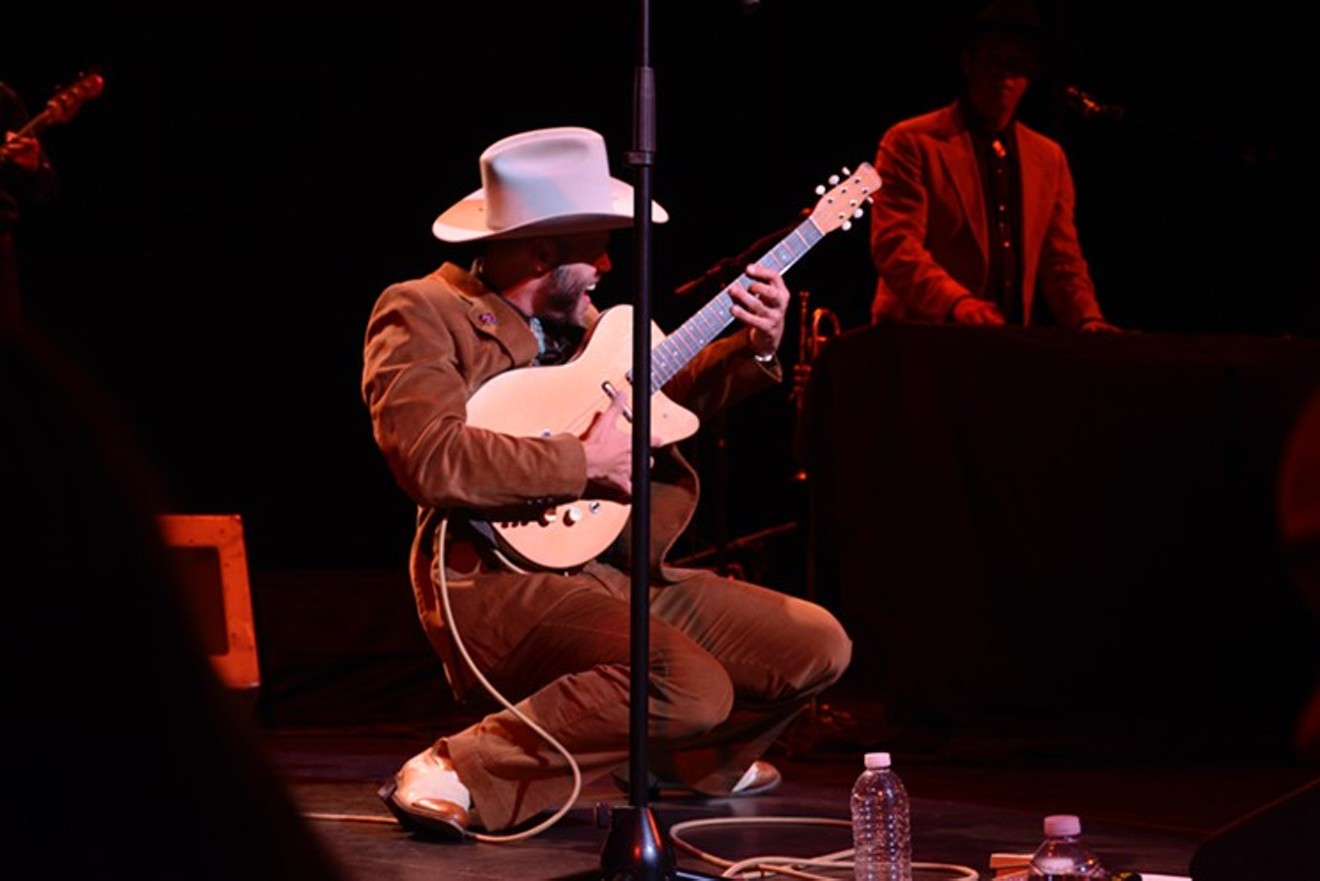 Charley Crockett will play Gas Monkey Live this Saturday. Jacob Vaughn
If you haven't cleared your schedule for Saturday night yet, you might want to go ahead and do that. Charley Crockett, Oliver Tree and Snarky Puppy are all coming to town to play that night, so you'll be pretty busy. But if you have to stay in Saturday night, you've got a few more live music options throughout the week. Like most Monday nights, Paul Slavens will be doing his thing at Dan's Silverleaf to help us end September on a good note. On Tuesday, you can hang around Dallas and see Muna at Deep Ellum Art Co. or head to The Balcony Club for some jazz from the Jason Bucklin Trio. You'll want to head to The Pavilion at Toyota Music Factory for some Tame Impala on Wednesday. Thursday, you'll have to choose between RL Grime and Gouge Away. It's a hard choice, but you come out on top either way.

Like on most Mondays, the spontaneous song generator, DJ and Ten Hands frontman Paul Slavens will take the stage at Dan’s Silverleaf. Slavens writes and performs songs on the spot, improvising about whatever comes to mind. Song title suggestions get thrown at him from the crowd and he just runs with them. Attendees might hear songs about escaping the spiraling vortex of Ikea, robot children or whatever else they can think of. If this isn’t part of your Monday music routine by now, it should be. Jacob Vaughn

Based out of Los Angeles, the trio of Katie Gavin, Naomi McPherson and Josette Maskin got their start after seemingly being plucked from the ether by One Direction’s Harry Styles. The former boy bander Brit brought  Muna on tour with him in Milan not long after the trio released debut album About U in 2017. The group is now back with long-awaited follow-up Saves the World, a cheeky nod to the band’s image as an ultra-progressive queer-girl group and their own self-reflective dourness. Throughout the new album’s 12 tracks, it’s pretty clear that Muna’s not trying to save the world; they’re trying to save themselves. Lead singer Gavin’s voice comes off like a post-millennial Dolores O’Riordan on the track “Number One Fan,” a song seemingly depicting a shadow of the singer’s own inner demons and her struggle to combat them with the kind of self-acceptance seldom expressed in 3½ minutes. Muna is a thoroughly modern pop band that asks the crowd to think while dancing. Nicholas Bostick

When Jason Bucklin isn’t teaching guitar and bass lessons, like he’s done for most of his life, he’s usually on stage with his jazz trio at The Balcony Club. In teaching guitar and bass, including master classes at the University of North Texas, Bucklin has grown an appreciation and passion for all kinds of music. But jazz was his first love. Bucklin used to play with Café Noir, the Dallas-based sextet, but every Tuesday, at least from now until sometime in December, Bucklin hits The Balcony Club stage with his trio for a night of jazz. And, it’s free. Go see the Jason Bucklin Trio while you still can. Jacob Vaughn

Wednesday night in Irving marks one of the area's biggest opportunities to bask in the concert glow of the between-ACL weekend rush. As artists descend on various Texas venues, the first week of October has traditionally served as halcyon days for those who love live music but can't make it to the dueling festival weekends in Austin. Tame Impala will undoubtedly bring a huge and devoted throng of fans to their performance as they've risen to one of the biggest arena acts currently touring on the indie rock scene. The Australian outfit brings a stage show tailor-made for festivals and outdoor stages, with pulsating beats, synchronous lights and singalong choruses ready to set the audience in motion. Since it's been a few years since the release of their last album, 2015's Currents, this also might be an opportunity to catch some newer tracks to complement the hits like "Feels Like We Only Go Backwards," "The Moment" and "Alter Ego." Jeff Strowe

Even with two full-length albums and an EP, you can listen to Gouge Away's 26-song complete discography in less than an hour. This show is not for the timid. Fronted by vocalist and songwriter Christina Michelle, the Florida band — named after a song from Pixies' Doolittle album — cranks out fast-paced, socially conscious noise rock songs about sexual politics, personal strength and just being better people to each other and animals. Dynamic, demented and downright intense, Gouge Away's style is sure to incite a full-concert length mosh pit, if not an all-out riot in The Limbo Room of Ruins on Thursday night when the band takes the stage after fellow noise-punk acts Jeromes Dream (LA), Soul Glo (PA) and Nosk (TX). You can skip your cardio workout for this one because all four of these bands bring high-energy performances that are sure to get you moving faster than you would on a treadmill. David Fletcher

It wasn’t all that long ago that the gaudy vocal signatures that some DJs and producers felt the need to sneak onto the beginning of rap tracks was still a favorite pet peeve of online commenters and actual music fans alike. In 2019, it’s not uncommon for the music producers of the world to carry a bigger name and bring a more concise artistic vision to a track than its vocalist. Case in point, producer/DJ Henry Alfred Steinway, aka RL Grime, who made his claim to fame after remixing Kanye West’s track "Mercy" alongside fellow producer Salva, back in 2012. The remix garnered more than 8 million hits after its release on SoundCloud and, since then, Grime has gone on to make beats and remixes for a slew of musical notables, from Benny Benassi and Skrillex to Chief Keef and The Weeknd. Equally fortuitous for Grime, Dallas has a voracious appetite for dramatic drops and danceable trap beats. Nicholas Bostick

Charley Crockett played more than 200 shows last year, according to Rolling Stone. For the first album release since his open-heart surgery in January, Crockett is set to play Gas Monkey Live this Saturday. Crockett will share the stage with Vincent Neil Emerson. The country-blues-soul crooner from Texas put out his new record The Valley on Sept. 20. The tunes are as thoughtful, catchy and foot-stomping as ever. You won't want to miss this all-ages show. You can get tickets for as low as $26. Jacob Vaughn

With Snarky Puppy, which won back-to-back Grammy Awards for Best Contemporary Instrumental Album in 2016 and ’17, it’s probably best to take the advice of The New York Times’ Nate Chinen on the Denton-bred group now based in New York: “Take them for what they are, rather than judge them for what they’re not.” Over the past decade, the love-them-or-hate-them, mostly vocals-free act has sharply divided critics, bloggers and record store clerks. Led by composer, producer and bassist Michael League, who formed the jazz-fusion act in 2003 while in the University of North Texas’ jazz studies program, Snarky Puppy hit its stride three years later after tapping into Dallas’ gospel and R&B scene, which remarkably upgraded the group’s sound and vibe, making it harder and harder to pigeonhole. The Pups won numerous Dallas Observer Music Awards for best jazz act before winning the outfit’s first Grammy Award in 2014 for best R&B performance for "Something" off Family Dinner — Volume 1. So if you’ve yet to witness the Grammy-winning act with serious local roots, catch it Saturday at The Bomb Factory to help welcome League & Co. back to Deep Ellum. Daniel Rodrigue

Oliver Tree's Wikipedia page says he began playing piano at age 2. "Playing" may be debatable, as most tots that age do more "hitting" on the keys than carefully constructing melodies. But, who knows? Maybe we're just not of the internationally acclaimed artist's fierce musical virtuosity. Either way, Oliver Tree's career as an alternative rock and electronic musician, filmmaker and producer has been widely successful since his youth. Rolling Stone describes his onstage and behind-the-camera antics as "Napoleon Dynamite-like eccentricity." Crowned with what we can assume is an ironic bowl haircut, Tree posts awkward and hilarious videos of him doing things like pumping gas into a mechanical scooter, surrounded by confused onlookers, to his social media. His latest album Do You Feel Me? came out last month and includes the single "Miracle Man," which has over 15 million plays on Spotify already. Perhaps channeling some Andy Kaufman-like charm, Oliver Tree embraces humor and humility in all aspects of his career, and it's working. Diamond Rodrigue