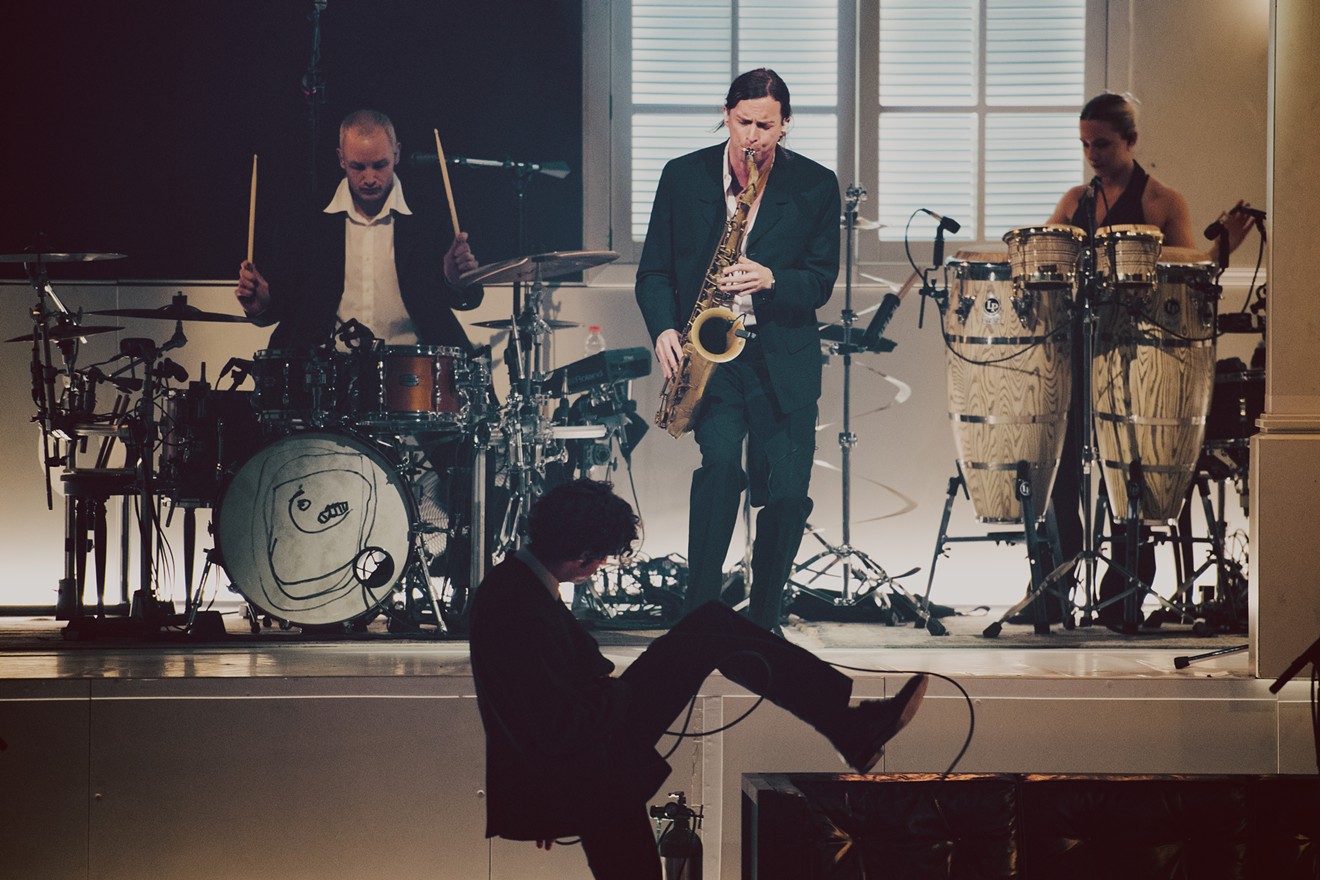 The 1975 were a bit 2014 on Tuesday. Jordan Curtis Hughes
The 1975, who played at the Texas Trust CU Theater in Grand Prairie on Tuesday, don’t seem to know what their deal is either.

Back in 2019, we praised the band for their experimental tendencies, which we found refreshing at the time. But in the Year of Our Lord 2022, it just feels different.

Listening to the English rock and pop band’s past records such as Notes on a Conditional Form and A Brief Inquiry Into Online Relationships gives a sense that vocalist Matty Healy felt pressure to make every album a grandiose statement. Every album had to be akin to Brian Wilson's Smile or The Beatles' White Album, while every lyric and song title had to be some cryptic, self-indulgent verbal exercise.

Healy’s curiosity has yielded compelling results, from the post-hardcore leanings of 2019’s “People” to the Joy Division callback “Give Yourself a Try,” and these releases were perfectly in line with the late 2010s fad of bucking genre conventions.

But it’s 2022 now. Trend cycles move at the speed of light and there’s no room for forward thinking, only nostalgia. And the current pastiche du jour is what the kids are dubbing “2014 Tumblr.”

This may be confusing to any geriatric millennial just hearing about this. While “bandoms” (fans of bands like Arctic Monkeys, The Neighbourhood and, of course, The 1975) were certainly a significant facet of the blogging platform’s distinct culture in the 2010s, anyone who was actually there can share stories of being inundated with nerdy content and memes. Disney adults, Harry Potter adults and people who think John Green is deep — the worst and most cringe brand of millennial according to any zoomer you ask — thrived and became the monsters they are today on Tumblr.

Yet a relatively minor subset of fashion bloggers who were active at the time have captured the imagination of TikTok users, who now express an unreal amount of nostalgia for posts made less than a decade ago on a website that still exists. The girls in attendance at the Grand Prairie shows recreated these outfits (characterized by tennis skirts, black tights and combat boots) impeccably in a way that often registered more as a costume than a genuine fashion statement. The original generation of “Tumblr girls,” who would be in their late 20s or early 30s by now, were not as heavily represented, presumably because they had work the next morning.
click to enlarge 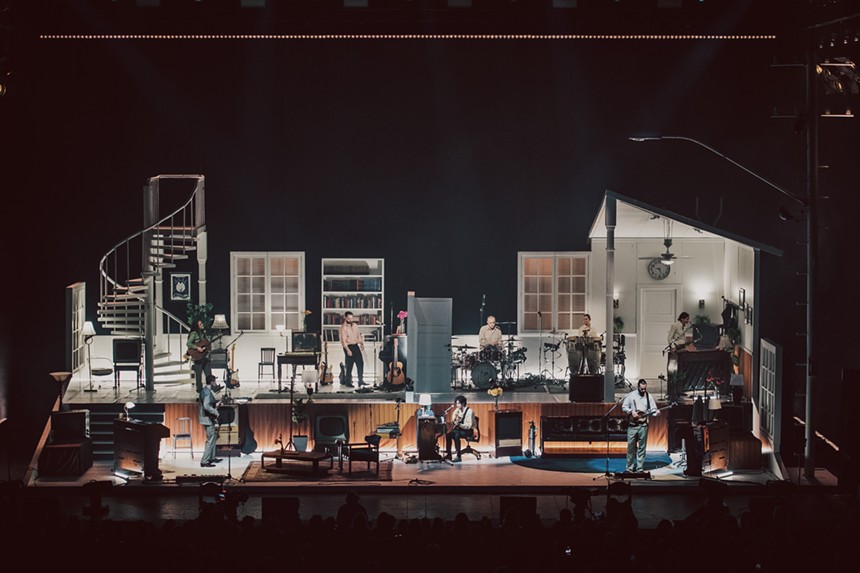 The 1975's set design didn't make total sense, but neither does Tumblr.
Jordan Curtis Hughes
The 1975 seem not only glaringly aware of all of this, but very much in on the joke. Their current touring set is divided into two distinct acts. The first act is dubbed “Being Funny in a Foreign Language,” after this year’s record, which the tour is promoting. As expected, this act heavily leaned on new material, both from the new record and 2020’s Notes on a Conditional Form. Healy, a cringe millennial himself at the ripe old age of 33, used this time to try new things and utilize a kind of theatricality rarely seen in pop shows.

The band stepped onto the stage to rapturous applause at 8:32 p.m. playing songs from Foreign Language in a stage set that can best be described as an Ashley Furniture model home inspired by Full House and Sanford and Son with analog TVs from the '60s and '70s scattered throughout the stage, along with a staircase and, strangely enough, a street lamp. The set design was like that of a Broadway play, but with subdued extravagance.

Healy belted through newer cuts such as “I’m In Love With You” and “All I Need to Hear” with a James Dean-esque aesthetic, taking cigarette drags as he nonchalantly played staccato piano chords to what can be stylistically compared to new wave and yacht rock. The first act seemed to hit on a style whose reminiscence ranged from Roxy Music and Talk Talk to Huey Lewis and the News and George Michael.
It showed The 1975 having the same showmanship as ever, but paradoxically prudent compared to past performances.

While this performance hit on new wave, power-pop and jazz fusion beats, The 1975’s past exports have given an essential monopoly to ambition at the expense of restraint. As impressive as the band has been at channeling a wide range of genres, it resulted in a messy hodgepodge of an album (Conditional Form) that blue-balled all the ants waiting anxiously for butcher scraps to fall onto the cutting room floor.

The band’s fans are diehards and have long been open to these new ideas, but audiences in Grand Prairie still struggled to muster much enthusiasm for this segment of the show. The second act and latter half of the set, however, was more attuned to the casual listeners and Tumblr fashionistas as it contained all the hits and bangers of yesteryear.

This portion of the show was dubbed “At Their Very Best,” a self-deprecating joke the audience seemed less in on and more part of. The opening notes of the return-to-form 2020 single “If You’re Too Shy (Let Me Know),” with the energetic synths and Instagram caption-ready lyrics like, “Maybe I would like you better if you took off your clothes” that fans have come to expect, created a whiplash-inducing vibe shift. The energy from fans went from zero to a hundred, culminating in everyone in attendance screaming the lyrics to “Robbers,” a strong contender for “2014 Tumblr” national anthem.

The two acts, as the band intended, were two entirely different shows. One half was a showcase for their new ideas, the other a winking admission of defeat, owning their status as one of music’s bizarrely recent throwback acts and just playing the hits. The audience reaction was the best punchline they could’ve asked for.
click to enlarge

Fans dressed up for The 1975.
Jordan Curtis Hughes
KEEP THE DALLAS OBSERVER FREE... Since we started the Dallas Observer, it has been defined as the free, independent voice of Dallas, and we'd like to keep it that way. With local media under siege, it's more important than ever for us to rally support behind funding our local journalism. You can help by participating in our "I Support" program, allowing us to keep offering readers access to our incisive coverage of local news, food and culture with no paywalls.
Make a one-time donation today for as little as $1.