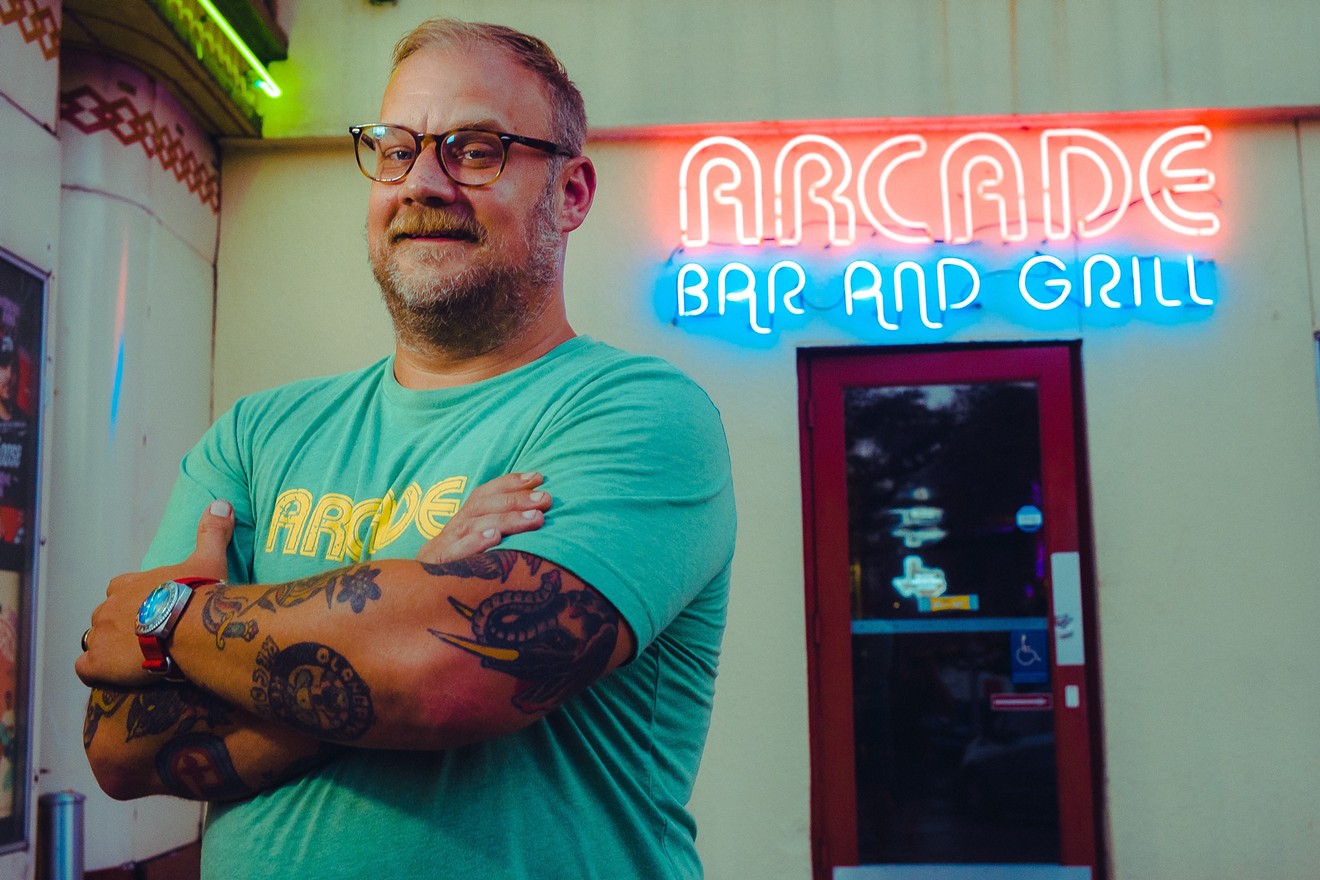 Moody Fuqua has taken over the new venues Bowlksi's and Arcade Bar as entertainment director, making the spot the best place to be on any given night. Karlo X. Ramos
On any given night, the Arcade Bar in Lakewood is the place to be. The narrow bar, decorated with battered bowling pins and vintage gaming consoles, hosts Dallas’ best DJs seven nights a week; on weekends, the adjacent bowling alley and music venue Bowlski’s Lakewood Theater offers live performances by local bands.

The two venues are connected and the kitchen is open, meaning you can bowl, eat, drink, listen to music, attend a show and play videogames or pool — all in one place. Watching over it all is Moody Fuqua, the entertainment director at the Arcade Bar and Bowlski’s and a veteran of the Dallas music scene.

Prior to his current position, Fuqua oversaw the calendar and booking at Crown & Harp, RBC and Club Dada, among other iconic venues. A devotee of obscure music “for heads of all different genres,” as he puts it, he’s now bringing that flair for finding quirky local talent — a talent honed in Deep Ellum and Lower Greenville — to Lakewood.

It’s almost just fortuitous that Fuqua ended up as the entertainment director at Arcade Bar, where he’s now turning it into a Dallas music destination. Craig Spivey, the founder of Bowlski’s, had purchased the Lakewood Theater and renovated it into a bowling alley around August 2019. Soon after, the pandemic put a damper on things and Fuqua was forced to take a hiatus from the Deep Ellum music scene.

A couple of months ago, as bars and music venues gradually reopened, Fuqua responded to an ad on Indeed for a bar managing position at Bowlski’s and the Arcade Bar. He hadn’t seen the venue — the bowling alleys, the pool tables, the gaming consoles — since it was renovated.

“There’s just so much stuff in here,” Fuqua says. “I was like a little kid in a candy store when I actually saw it. I was like, ‘Holy shit, I can do so much cool shit here.’”

Spivey sat down with him for a six-hour interview. Fuqua was just looking for work.

“The next thing I knew, [Spivey] was like, ‘Well, it sounds like you do a lot more than just bar manage,'" Fuqua says. "And then we started talking about music — he loves music and the venue and the history of the place and DJs and all that kind of stuff. And then he was like, ‘Fuckin’ A, man, let’s do this.’”

“There’s just so much stuff in here ... I was like a little kid in a candy store when I actually saw it. I was like, ‘Holy shit, I can do so much cool shit here.’” – Moody Fuqua of Arcade Bar and Bowlski's


They purchased a new PA system for the Arcade Bar and Bowlski’s, as well as turntables. Fuqua pinged his friends and connections to start the nightly DJ shows and weekend band performances. By now, a typical week at the Arcade Bar will include Dezi 5 playing dance music on Monday; Bathhøuse performing house, dark wave, Italo disco and other techno music on Tuesday; DJ Sudaka curating Latin rhythms on Wednesday; and guest DJs spinning vinyl Afrobeat, funk, R&B, hip-hop and house music once a month on Thursdays as part of Fresh 45s, a party that Fuqua has been involved with since his days at Crown & Harp.

“People are really, really excited to have something that’s not in Deep Ellum,” Fuqua says. “It’s nothing against Deep Ellum. … I don’t want to come across as bashing Deep Ellum by any means. It’s just different. We’re doing something different here and it’s a place for people that are a little bit older, that care about good music and understand good music.”

Fuqua is looking forward to adding more DJs and obscure musical genres to the Arcade Bar’s setlist and booking touring bands — as well as more local talent — for the Bowlski’s stage. His goal is to create a place for local musicians and locals who love music to hang out — “a place for the freaks and weirdos to come,” in his own words.

“It’s building something,” he says. “And I enjoy building things.”
KEEP THE DALLAS OBSERVER FREE... Since we started the Dallas Observer, it has been defined as the free, independent voice of Dallas, and we'd like to keep it that way. With local media under siege, it's more important than ever for us to rally support behind funding our local journalism. You can help by participating in our "I Support" program, allowing us to keep offering readers access to our incisive coverage of local news, food and culture with no paywalls.
Make a one-time donation today for as little as $1.