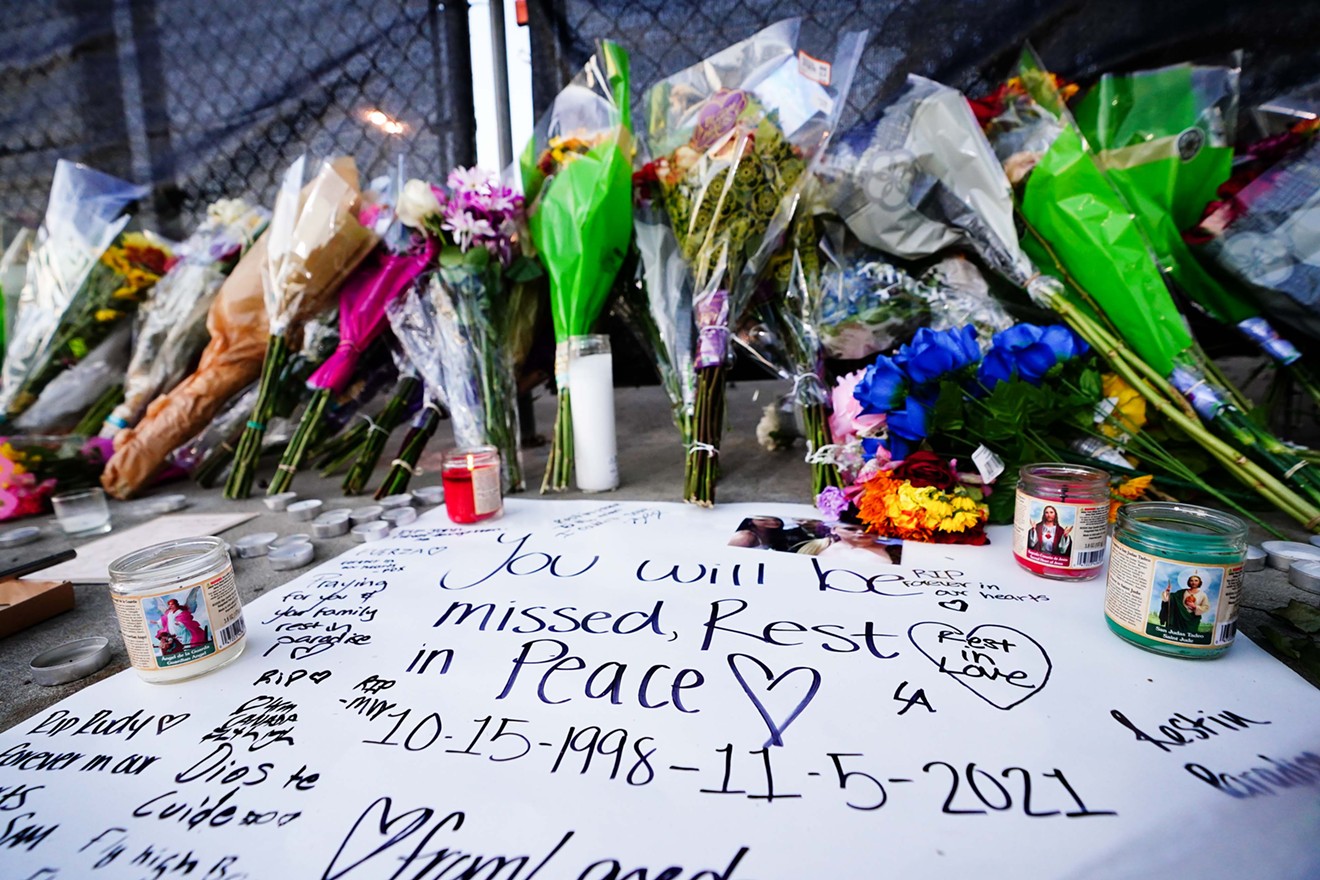 A makeshift memorial outside Houston's NRG Park, where Travis Scott's Astroworld festival resulted in 10 deaths and hundreds of injuries. Alex Bierens de Haan/Getty
Rapper Travis Scott, whose hometown Astroworld concert on Nov. 5 in Houston resulted in crushing crowds that caused the death of 10 audience members and injured hundreds more, has been trying to clear his name since the tragedy. Sort of.

The hip-hop artist has been accused of “inciting the crowd” at the November show, as frenzied fans raged into a crowd surge where 10 died, including a 9-year-old child. Scott was also criticized for continuing to perform for 37 minutes after the first audience member was hurt, even as paramedics and ambulances made their way through the crowd.

On Nov. 6, the day after the concert, he released a statement on Twitter saying, “Houston PD has my total support as they continue to look into the tragic loss of life,” and writing: "I’m absolutely devastated by what took place last night. My prayers go out to the families and all those impacted by what happened at Astroworld Festival.”


Scott has since been sued, along with the event’s promoter Live Nation, by the victims' families and in 400 separate lawsuits from injured concertgoers. The hundreds of lawsuits will move forward as one in a Texas court. They represent 2,800 individuals and seek billions in damages.

Travis has maintained that he was “unaware” of the events until after the show. In the aftermath, he offered to pay for the victims’ funeral costs, an offer that was rejected by at least half of the families.

Scott has also been criticized more recently for “liking” a post by Kanye West (who is the soon to be ex-husband of Kim Kardashian, sister to Scott's partner Kylie Jenner) in which West demanded singer Billie Eilish apologize to Scott for what West perceived as a slight against Scott when Eilish stopped a concert to aid a fan and said, “I wait for people to be OK before I keep going."

Applications are now open for the total $1 million in scholarships for 100 Black students in their senior year at a historically Black college. In order to qualify for the $10k, the hopeful graduates must be “experiencing financial hardship” and have an average GPA of 3.5 or higher.

The second part of the initiative focuses on mental health services and includes “seven figures in pledges to fund digital counseling and telephone hotlines,” according to the release. “Scott will provide free programs with licensed professional counselors and social workers.”

The third part of the project, in conjunction with Travis Scott’s Cactus Jack Foundation, is a “seven-figure expansion of the CACT.US Youth Design Center at TXRX Labs in Houston, a nonprofit makerspace for young artists, designers, tech innovators, including free studio space, workspace, tool spaces, job and apprenticeship training, youth education and events,” the statement reads.

And lastly, the project will "address safety challenges for large-scale live events through funding the U.S. Conference of Mayors Task Force on Event Safety and a tech-driven device currently in development,” according to the release.

“My grandfather was an educator who made a difference in thousands of young lives throughout his life," Scott said in the statement. "He is a major influence on me and countless others, whose dreams he believed in, whose hopes he invested in, and whose futures he made big. It’s in his spirit that we are creating projects and programs that will look to the future of our communities and create hope and excellence in as many lives as possible.”
KEEP THE DALLAS OBSERVER FREE... Since we started the Dallas Observer, it has been defined as the free, independent voice of Dallas, and we'd like to keep it that way. With local media under siege, it's more important than ever for us to rally support behind funding our local journalism. You can help by participating in our "I Support" program, allowing us to keep offering readers access to our incisive coverage of local news, food and culture with no paywalls.
Make a one-time donation today for as little as $1.