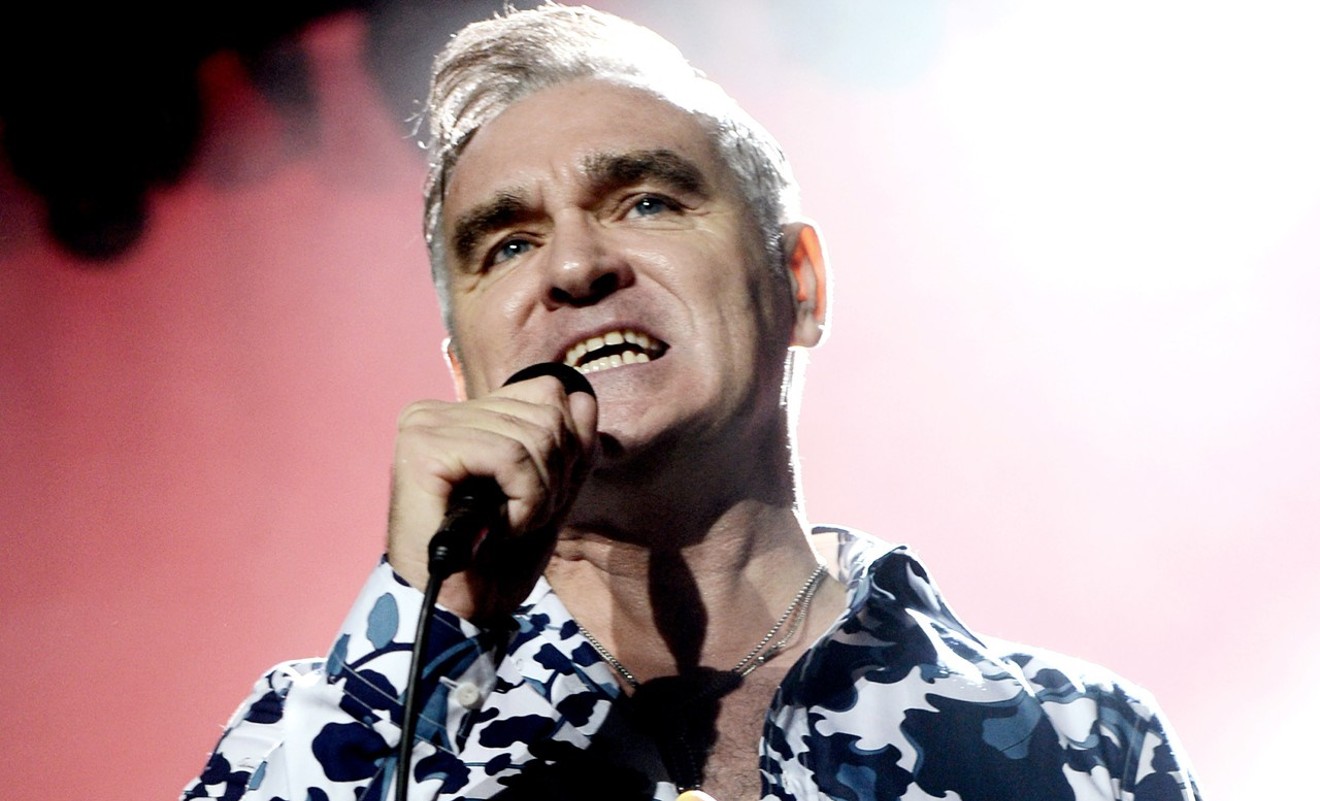 Stop us if you’ve heard this before: Morrissey’s political views have made headlines. The former Smiths frontman is no stranger to controversy. Even his most loyal fans cringe at the dissonance of his earlier and seemingly whimsical and romantic lyrics and his statements on race and allegiance to the far right.

Over the years, Morrissey's reputation as a "bigmouth" has grown, but it's his recent comments on race and immigration that's left many fans perhaps feeling betrayed and longing for the Moz of yesteryear, a man who they, and critics the world over, consider one of the best songwriters of his generation. 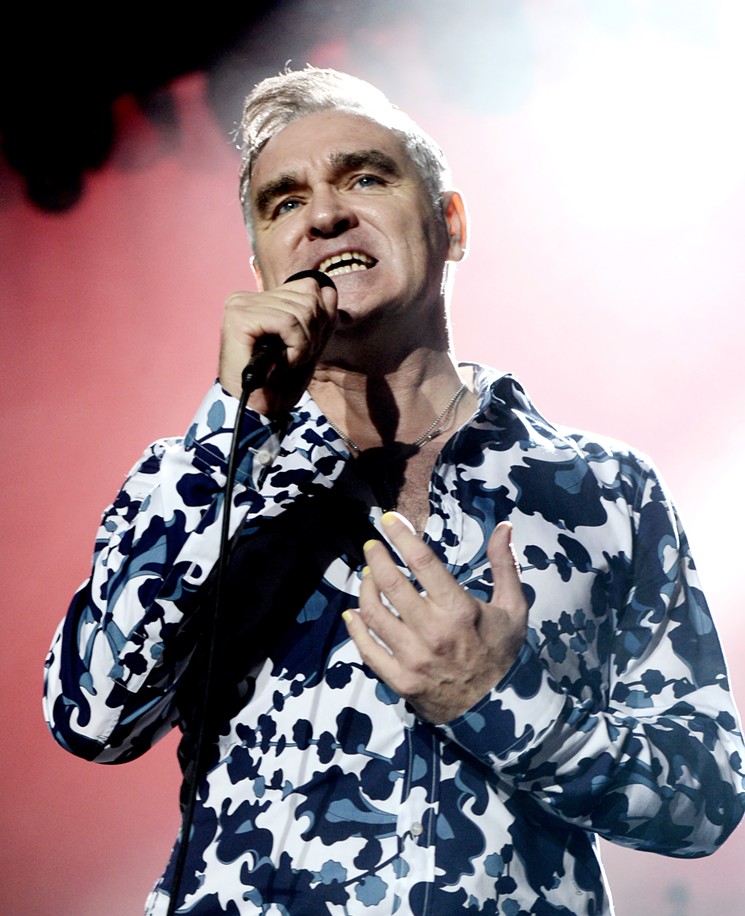 Morrissey should probably only communicate through song lyrics.
Kevin Winter/Getty Images
The age-old idea of separating artists from their work could be argued endlessly, and the case with Morrissey is no different. But he remains a tabloid darling, constantly driving his fans to wonder where the cognitive divide lies with a once charming man's musical genius and his ever controversial opinions today.

In a May 13 episode of The Tonight Show with Jimmy Fallon, the 60-year-old Morrissey openly displayed a politically far-right pin on his lapel supporting the U.K.’s For Britain movement, a movement which, among other platforms, calls for the "end of the Islamisation of the U.K.,” according to its website. The late night show’s network received an enormous amount of backlash. About a month later, Stereogum reported that, in an interview with his nephew, Morrissey stated: “Everyone ultimately prefers their own race … does this make everyone racist? The people who reduce every conversation down to a matter of race could be said to be the most traditionally ‘racist’ because everything in life is NOT exclusively a question of race, so why make it so?”

Two weeks ago, Morrissey posted an alleged "white supremacist" YouTube video to his website that has since been deleted. It argued that the British establishment is using rapper Stormzy to promote multiculturalism at the expense of white culture, under the title "Nothing But Blue Skies For Stormzy … the gallows for Morrissey," according to The Independent. It's worth mentioning that Morrissey has always denied claims of racism.

A fan penned a question to Cave on the musician's blog The Red Hand Files: "Is it possible to separate the latter-day artist from his earlier art? More specifically, what are your views on Morrissey, both early days and his newer more ugly persona?"

Cave responded: "... I think perhaps it would be helpful to you if you saw the proprietorship of a song in a different way. Personally, when I write a song and release it to the public, I feel it stops being my song. It has been offered up to my audience and they, if they care to, take possession of that song and become its custodian. The integrity of the song now rests not with the artist, but with the listener."

Whether bad press overshadows Morrissey's influential songwriting is up to his listeners.

Flowers responded to Morrissey's recent headlines by dubbing him a musical "king" in an interview with NME, stating: "He’s still a king. He’s unparalleled in what he’s achieved and his prowess and his lyrics and his sense of melody, it’s just incredible."

English songwriter and politically liberal activist Billy Bragg couldn't disagree more with their sentiments. In a recent article with The Guardian, Bragg condemns Morrissey for his far-right ideology, and stated, “Those who claim that this has no relevance to his stature as an artist should ask themselves if, by demanding that we separate the singer from the song, they too are helping to propagate this racist creed.”

Has the World Changed or Has Morrissey Changed?


During his five-year career with The Smiths — a band at the forefront of the emergence of alternative rock in the '80s – Morrissey’s lyrics of acceptance, love, death and everything in between cemented him as one of music’s best wordsmiths and a major cultural influence on his listeners. Singles such as “How Soon Is Now?,” “Heaven Knows I’m Miserable Now” and “There Is A Light That Never Goes Out” are some staples in the Smiths’ catalog.


Dubbed by the press as the “Pope of Mope,” Morrissey’s affinity for dark and macabre lyrical sweet nothings in the Smiths became his signature approach to songwriting. You’d be hard-pressed to find a Smiths fan who doesn’t credit The Queen Is Dead’s “There Is a Light That Never Goes Out” for fogging up more than a few car windows during their own blossoming youths. One part goes: “If a double-decker bus crashes into us/to die by your side is such a heavenly way to die.”


But more to the point of Morrissey’s sensitive side; on The Queen Is Dead’s “The Boy with A Thorn in His Side” Morrissey writes: “Behind the hatred there lies a plundering desire for love.” And on Hatful of Hollow’s “How Soon Is Now?” Morrissey says he is human and needs to be loved, just like everybody else does. And talks of a shyness that is criminally vulgar.

We don't think Morrissey's really had a problem saying anything he'd like to. And with his 1988 solo debut Viva Hate, he employs a more aggressive, shock-driven approach, specifically on a track titled "Margaret on the Guillotine," a reference to then prime minister Margaret Thatcher. On the track "Bengali in Platforms," the assumed racially insensitive lyric "life is hard enough when you belong here" weighed heavy on the ears of fans who enjoyed the more sensitive songwriting of The Smiths, causing some to forgo supporting his solo career and foreshadowed the upcoming decade's string of anti-immigrant and racist accusations toward him.

Does Today’s Morrissey Just Have a Thorn in His Side?

Over the years, headlines like “Morrissey reignites racism row by calling Chinese a 'subspecies.' " (In reference to his opinion on the country's treatment of animals.) "Bigmouth strikes again and again: why Morrissey fans feel so betrayed," and others citing the singer's controversial public image have become par for the course in Moz's career. And he claims that the media who do report on his views are pursing a vendetta against him. But he's not the first politically outspoken songwriter, and he certainly won't be the last.

The thing is, rock stars aren't meant to be silent, opinion-less pillars of morality (after all, that wouldn't be very rock 'n' roll, right?). And whether bad press overshadows Morrissey's influential songwriting is up to his listeners. It's safe to say, though, that as long as there are outsiders and young people longing to be understood, The Smiths' light will likely never go out.
KEEP THE DALLAS OBSERVER FREE... Since we started the Dallas Observer, it has been defined as the free, independent voice of Dallas, and we'd like to keep it that way. With local media under siege, it's more important than ever for us to rally support behind funding our local journalism. You can help by participating in our "I Support" program, allowing us to keep offering readers access to our incisive coverage of local news, food and culture with no paywalls.
Make a one-time donation today for as little as $1.