Now You Can Drink Dallas' Musical Heritage at the Midnight Rambler 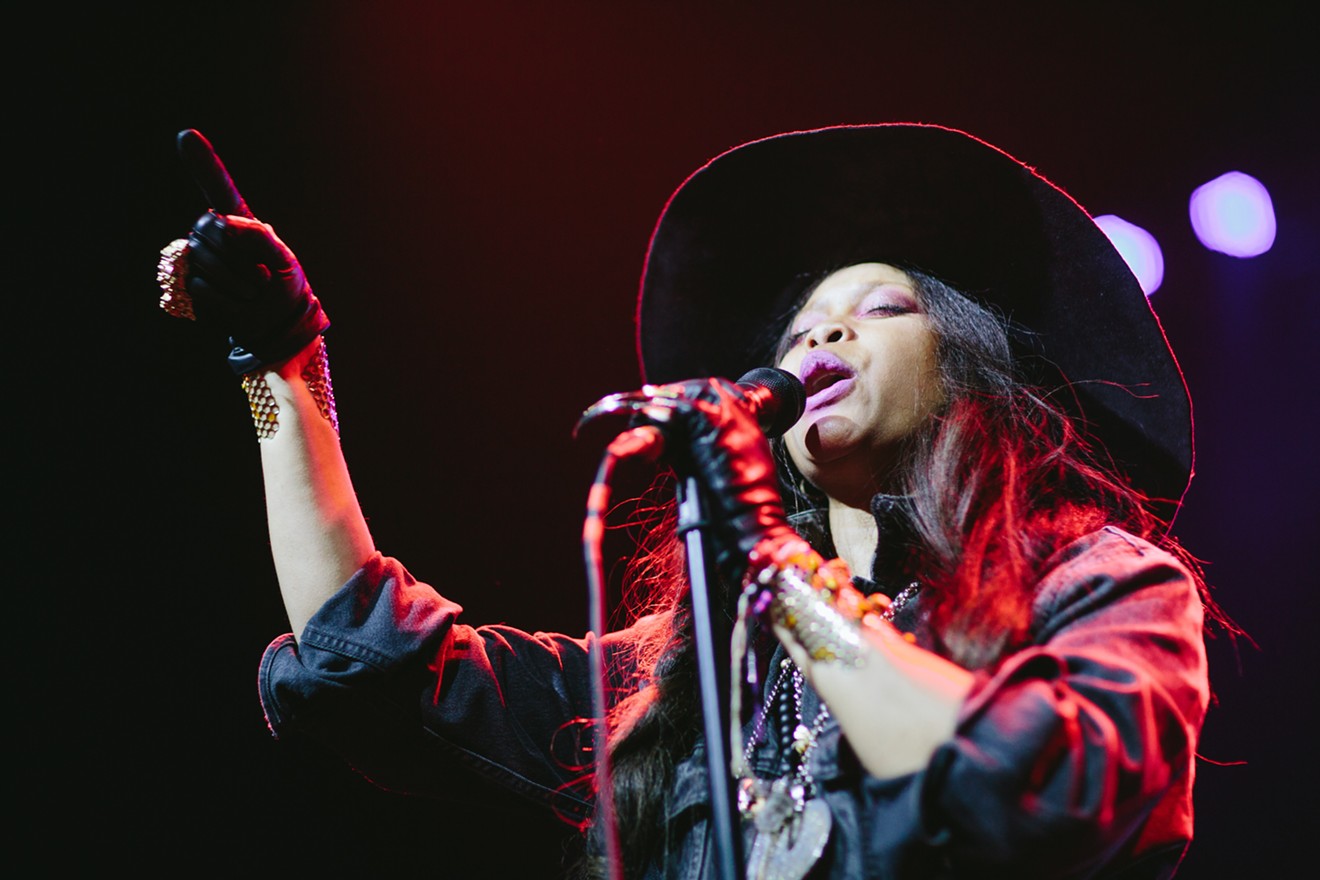 Erykah Badu and other North Texas artists inspired Midnight Rambler's new cocktails, menus and DJ series. Kathy Tran
Dallas' music contributions run just as deep and long as those of destinations such as Bourbon Street in New Orleans or the Honky Tonk Highway in Nashville. And it's something that subterranean bar Midnight Rambler wants every patron to know.

"A lot of times when people start to create things, they get very concerned about things going on in other parts of the world and they forget how cool their city can be," says Midnight Rambler general manager Gabe Sanchez. "We wanted to look into our city, especially at our musical history and how it relates to parts of the city."

Sanchez and his team at the Main Street cocktail lounge crafted a new series of summer drinks inspired by some of Dallas' biggest musical influences and iconic locations, including Erykah Badu, St. Vincent, the late Meatloaf, Deep Ellum and the Starck Club.

"We would sit down and listen to the music and learn a little about the person like some of the stuff with Erykah at the beginning of the neo-soul movement and her sound," Sanchez says. "We would kind of come up with other parts of her personality and the way she approaches what she does and how she approaches other human dimensions."

One of two drinks they came up with for Badu is called Naked on the Knoll, referencing the famously bold statement she made in 2010 in the video for "Window Seat" by walking naked through Dealey Plaza. The agave gin cocktail consists of natural, organic ingredients like pisco sour, cucumber and  lemon. The other is a Japanese whisky refreshment called Jim, James, Paul & Tyrone, a shout-out to the names in her song "Tyrone."

"We go through it as a group and try things just like any other creative endeavor," Sanchez says. "Sometime it works and sometimes you're like, yeaaah, this doesn't work. So you try it again and have one of those aha moments."

One of the stranger sounding concoctions is the El Mero Mero, which pays tribute to jazz legend Roy Hargrove, with a mix of Cachaça, curry powder, papaya and banana milk. It sounds like something kids would mix together for fun in a glass of water with the condiments on the table of a five-star restaurant. Sanchez swears by its sweet and spicy facets.

"You think it's going to look a certain way or taste a certain way and you get to the end of the equation," Sanchez notes, "and, oh my God, it's amazing." The Jim, James, Paul & Tyrone, made with Japanese whisky, chicha morada, rose balsamic and dried flower, is one of two of the Midnight Rambler's new cocktails inspired by Dallas music queen Erykah Badu.
Headington Companies
The musical menu also includes some less complex drinks inspired by local music makers, like a gin martini called The OG in honor of blues legend Robert Johnson and a "dirtier than dirty" martini inspired by the wild times at Deep Ellum's Curtain Club before it closed in 2019.

Also on the menu: a couple of decadent dishes that address the diversity in Dallas' music scene and the changing tastes of the artists who fuel it. New Money and Old Money are a novelty pairing of mainstream and fine dining and drinking. The former is just a can of Bud Light beer and a bag of Lays potato chips, and the latter is two glasses of Champagne. Both of them come with a bump of caviar.

"We wanted to have some fun and can't take things too seriously, but caviar being that kind of decadent reflection of expendable income, somebody that has new money just getting used to things like this ...  and they might have a Bud Light palate and have the money to spend on caviar," Sanchez says.

The Midnight Rambler rolls out its new cocktail menu this week and comes with a map of the city marking the musicians' and communities' stomping grounds.

"The goal is when they leave here, they'll take the menu with them," Sanchez says. "They have a map of the city so they'll go check out Oak Cliff and South Dallas and Deep Ellum and explore what we think is a great city."

To further celebrate North Texas music, the bar will host a series of DJ events including Starck Club Night on July 21, Roy Hargrove Night on July 27 and Erykah Badu Night on Aug. 4.
click to enlarge

The Dance Police drink mixes Patron silver, watermelon juice and soda with a dusting of "Electric Dust" watermelon candy to honor the famed Starck Club. It's part of a new summer cocktail menu at the Midnight Rambler.
Headington Companies
KEEP THE DALLAS OBSERVER FREE... Since we started the Dallas Observer, it has been defined as the free, independent voice of Dallas, and we'd like to keep it that way. With local media under siege, it's more important than ever for us to rally support behind funding our local journalism. You can help by participating in our "I Support" program, allowing us to keep offering readers access to our incisive coverage of local news, food and culture with no paywalls.
Make a one-time donation today for as little as $1.