Abortion Is Still Legal in Texas For Now: Here Are Some Options and Resources 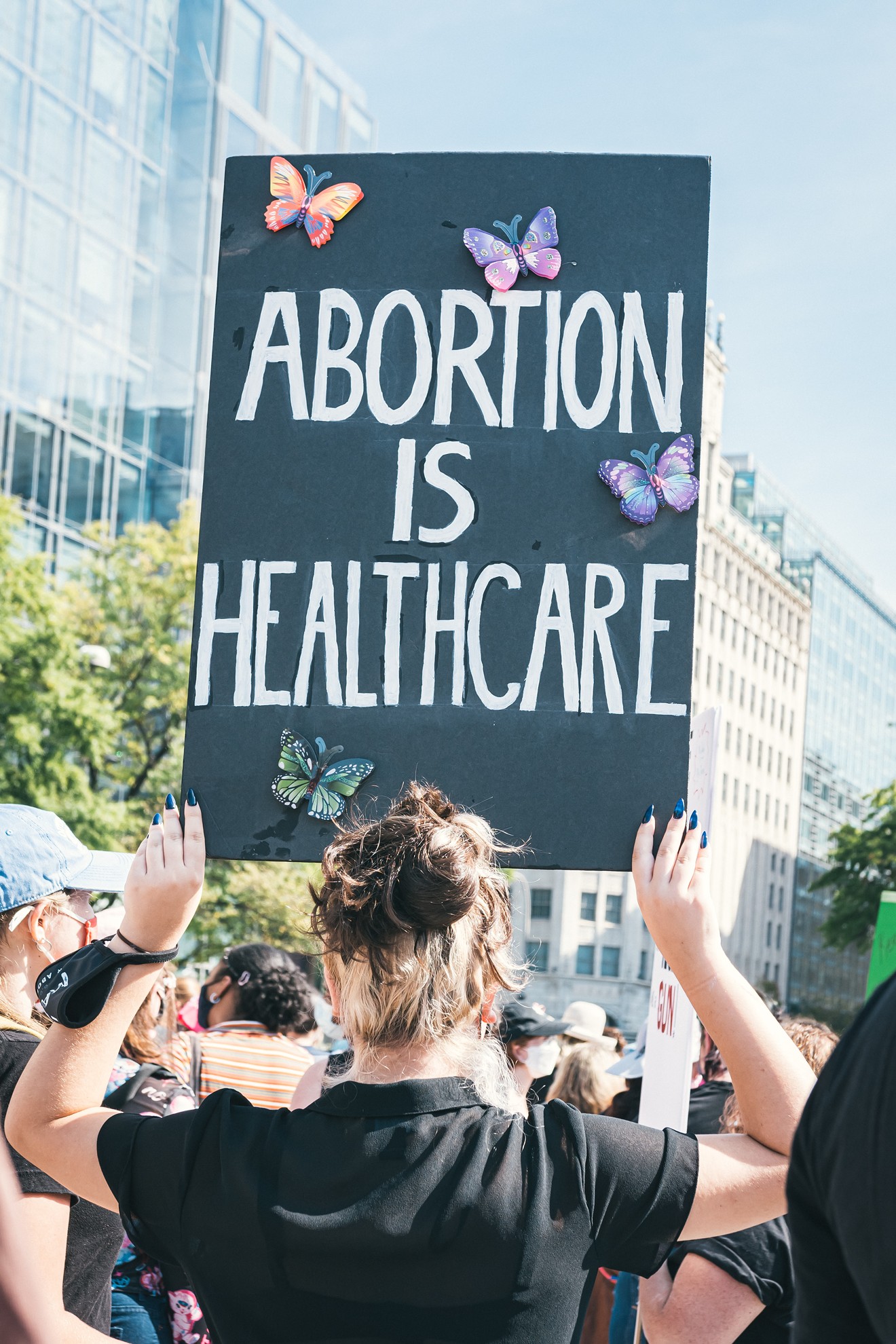 Abortion is still legal in Texas, although it's been restricted by new laws. Photo by Gayatri Malhotra on Unsplash
While the anti-abortion debate rages on, the procedure remains legal. Although restricted by recent Texas laws, abortions are still available to women in Dallas and around the state, pending a final ruling from the U.S. Supreme Court, which appears ready to overturn Roe v. Wade, the case legalizing abortion nationally, according to a recently leaked unpublished court opinion.

Because of Texas Senate Bill 8, a law that went into effect Sept. 1, 2021, abortions are prohibited at around six weeks of pregnancy.

Planned Parenthood, a women’s health nonprofit that has been delivering decades of women’s and reproductive care, is a comprehensive resource for people who would like more information about this process, what options are available and how to find an abortion provider.

The six-week countdown begins on the first day of a women’s last period, not the day that she had sex. This means that it could be at least four weeks before a woman even thinks she might be pregnant, leaving just a two-week (or even shorter) window to seek an abortion provider and receive treatment.

SB 8's language, “around six weeks,” means that it depends on the cardiac activity of the embryo, which can be detected by a healthcare provider.

There are also stipulations about the age of the person seeking an abortion, and anyone under 18 needs permission from a parent. In some cases where a parent may not approve, there is the possibility for a judicial bypass when the judge waives that requirement.

If a minor in Texas needs assistance with this, they can contact Jane’s Due Process hotline at 866-999-5263 for free legal support or Repro Legal Helpline.

As far as options go, if a woman thinks she might be pregnant and it's within five days of intercourse, she could use emergency contraception, otherwise known as the morning-after pill.

This is not an abortion pill — it prevents a pregnancy from ever happening. However, the earlier this is taken the more effective it is, and it's best taken as soon as possible, or at least within three days.

There are different emergency contraception brands, but a common one is Plan B. This and other brands are available at many pharmacies without age restrictions. A person of any gender may purchase these over-the-counter, but they might have to ask the pharmacist or worker to get it if it is kept in a locked case.

A person isn't required to show ID to purchase emergency contraception, even if the medication is kept locked behind a counter.

Planned Parenthood provides a detailed explanation of emergency contraception as well as different brands and options, such as AfterPill or using a copper IUD instead.

Plan B runs around $40-$50, although there are other brands that are cheaper. It might be worth checking a local pharmacy ahead of time to know what options are available and how much they cost.

Again, emergency contraception works the best the sooner it is taken, and Planned Parenthood advises people to purchase it ahead of time to have on hand whenever needed. That way, it can be taken immediately after intercourse and has a better chance of being effective.

If a person does not use emergency contraception or it doesn’t work and they become pregnant, there are two different abortion options — by pill or by procedure. There are many online resources available to those that would like more information on these options.

Abortionfinder.org is a site that can help women locate an abortion provider as well as provide information about the laws in Texas and links to outside resources such as travel assistance.

A person can find verified and safe clinics that provide abortions in their area by putting in their location, the first day of their last period (or click the box saying they don’t know) and providing their age to the landing page of Abortion Finder.

Another resource for information specifically in Texas is the Texas Equal Access Fund, which provides emotional and financial support to those needing an abortion.

Denise Rodriguez, the communications manager for TEA Fund, said: “We have a text line where people can reach us to start the process of getting funding and to ask questions on where to find a clinic.”

She explained that they also have a text support system called virtual clinic companion that provides callers with someone to support them via text through through their procedure, as well as a peer support group called Post Abortion Truth & Healing (PATH), which is exclusively for people who have had abortions to support each other in a safe space.

As far as the two abortion options go, many abortion providers use the abortion pill, which uses hormones and is a safe option up to 11 weeks into the pregnancy. Planned Parenthood provides a detailed explanation about the abortion pill, how it works, and its effectiveness.

For women in Texas, the pill may be obtained by going to a Planned Parenthood location, or any other abortion provider, and getting a prescription up to the six-week cutoff.

Women in Texas can also travel to get an abortion if needed.

There is also something called telehealth, which includes speaking with a healthcare provider virtually and getting a prescription for the abortion pill that way. However, ordering abortion pills online in Texas is not legal and abortion pills can not be delivered to the state.

Planned Parenthood can help with this option, but states that a person must have an address in one of the states listed on their information page about how to order the abortion pill online.

The telehealth option is under the category of self-managed abortion, which means self-inducing an abortion outside of a medical setting, such as at home. Plan C is another resource for these services and has information on this process.

Rodriguez said that the TEA Fund does not offer information about self-managed abortion, or SMA, but they can point people to other sources.

“I recommend you check out the If/When/How website [ifwhenhow.org] that offers information on how to navigate that,” Rodriguez said. “We do tell people to reach out to places where they can connect to resources about SMA.”

Both Planned Parenthood and Abortion Finder provide information on this option as well.

If a person can not afford to travel to their nearest provider location, or can not afford the abortion itself, there are many resources available to help pay for them such as Buckle Bunnies and Fund Texas Choice.

Abortion Finder provides a list of other resources and further explanations about the laws and options for Texans here.

The other abortion option is through a in-office procedure and can be used until about 14-16 weeks after the first day of the preceding menstrual cycle, at least outside of Texas in states with less restrictive laws, but some providers will not use this option after week 12.

Planned Parenthood provides more information about this option as well, and according to them, whichever abortion route a person wants to go depends on personal preference and situation.

These are options that are available to women in Texas right now, but this will change if Roe v. Wade gets overturned.

If that happens, abortions will no longer be legal in Texas and women will need to travel in order to get one. This means traveling to a state that will continue to keep abortions legal even if Roe v. Wade is overturned.

“When Roe is overturned, many people will have to travel to states where they can access care, which is something most abortion seeking Texans are already doing,” Rodriguez said. “When the trigger law goes into effect, it will mean that all Texans will have to travel.” (If Roe is overturned, the trigger law will automatically ban abortions 30 days later.)

TIME has a map showing which states have trigger laws around abortion showing the states that will or will not change their laws on abortion if Roe v. Wade gets overturned.

There are many resources available, like TEA Fund and Planned Parenthood, that provide a lot of information to those that need it. However, using contraception and other forms of birth control is a safe and reliable way to not need an abortion in the first place.

The birth control pill is also an option and is available with a prescription from a healthcare provider or online through multiple companies.

Dallas women still have options available to them, but these could be taken away by the Supreme Court later this year. Being prepared by purchasing condoms and emergency contraception ahead of time is always a choice, especially considering that the future of this freedom is not clear.

There are resources available including Planned Parenthood, Abortion Finder, TEA Fund and many others to help plan and pay for it all if needed.

“Texans have been experiencing a post-Roe reality for a while now and we have been here to help them navigate a system that was intentionally built against them,” Rodriguez said. “TEA Fund will be here to support people who need abortions always and they can reach out to us for support.”
KEEP THE DALLAS OBSERVER FREE... Since we started the Dallas Observer, it has been defined as the free, independent voice of Dallas, and we'd like to keep it that way. With local media under siege, it's more important than ever for us to rally support behind funding our local journalism. You can help by participating in our "I Support" program, allowing us to keep offering readers access to our incisive coverage of local news, food and culture with no paywalls.
Make a one-time donation today for as little as $1.