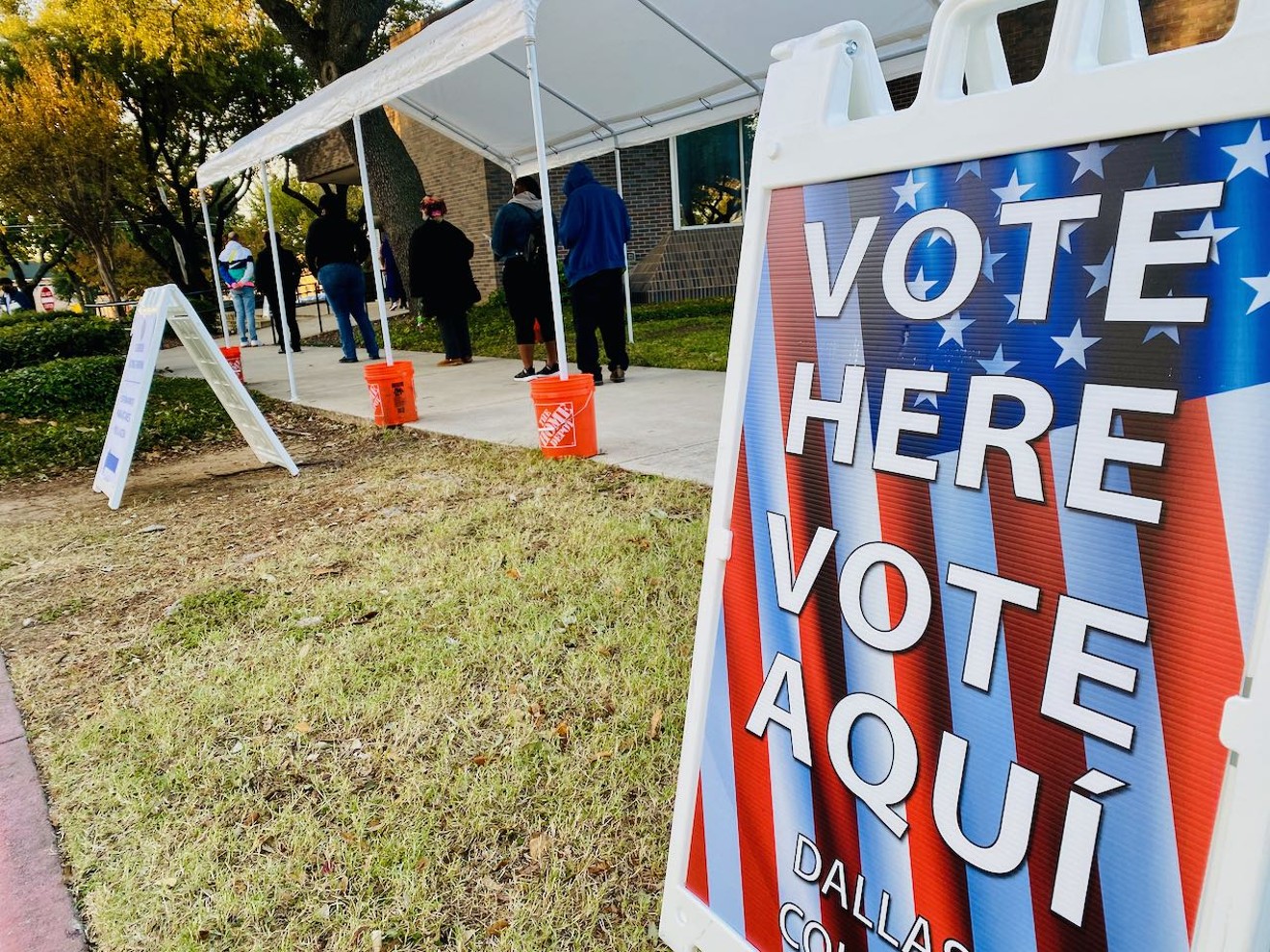 Texas lawmakers filed a slew of so-called election integrity bills in the last legislative session. Lauren Drewes Daniels
Texas Secretary of State John B. Scott, a Republican appointed by Gov. Greg Abbott to his post in October 2021, communicated directly with a conspiracy theorist pushing the debunked notion that President Joe Biden’s victory was fraudulent and that the elections were marred by widespread voter fraud, according to text messages recently obtained by a D.C.-based watchdog.

The texts, which American Oversight says it obtained via a public records request, appear to show a direct line of communication between Scott and former Overstock.com CEO Patrick Byrne, a prominent conspiracy theorist who had close ties with former President Donald Trump and who is expected to speak on Friday to the House select committee investigating the Jan. 6, 2021, Capitol riot.

"Although Secretary Scott has publicly maintained that his audit of the 2020 election is to confirm the results, privately, he has met with Trump allies and prominent election deniers," Dera Silvestre, American Oversight's communications manager, said by email.

"Patrick Byrne was a vocal supporter of the former president’s efforts to overturn his election loss," Silvestre said, "and the dangerous lies he and other conspiracy theorists peddle are an existential threat to democracy."

Byrne was a member of what The Washington Post described as "a motley crew of unofficial Trump advisers [who] had talked their way into the Oval Office and an audience with the president of the United States to argue the election had been stolen by shadowy foreign powers — perhaps remotely via Nest thermostats."

The meeting turned into a raucous hours-long shouting match as White House staffers argued that the suggestions made by the delegation, which included Michael Flynn, a former national security adviser, and lawyer Sidney Powell were potentially illegal.

Not long after taking up his post, Scott told the Texas Tribune that he wanted to "restore confidence" in the electoral process, although he added that he had "not seen anything" indicating that the November 2020 presidential vote had been rigged.

"Although Secretary Scott has publicly maintained that his audit of the 2020 election is to confirm the results, privately, he has met with Trump allies and prominent election deniers." - Dera Silvestre, American Oversight

But as part of his new job, Scott would oversee the state's election audit, which had been announced a month earlier after Trump prodded Abbott to look into the results. Democrats criticized Scott's appointment, pointing to the fact that he had briefly represented Trump in a lawsuit to overturn electoral results in Pennsylvania. But because Abbott appointed him during an interim period, Scott will not face confirmation until 2023.

In response to a list of questions emailed by the Observer, Sam Taylor, the assistant secretary of state for communications, sent a lengthy emailed reply:

So… what’s the story here? That the Secretary of State agreed to take a meeting and hear out concerns about election integrity? Secretary Scott meets with people and organizations all the time, hears out their concerns about election integrity, and asks them to submit any evidence of illegal activity they have to our office so that we can refer it over to the Attorney General’s office for investigation, if warranted. We even have an official complaint form that literally anyone can fill out and submit to our office if they believe they have evidence of crimes in connection with an election: https://www.sos.texas.gov/elections/forms/complaintform-sos.pdf

I know American Oversight has been pitching these documents to various reporters in Texas over the last few months, and I also know American Oversight provides pre-formulated questions for reporters to ask our office just to raise the specter of some alleged malfeasance. You’re the only outlet I know of that is actually moving forward with publishing a story, apparently.

If this organization had any real bombshells, they wouldn’t be dropping them to the Dallas Observer.

Good luck to you,

(The Observer wrote its own questions and never insinuated that the Secretary of State's Office was law enforcement or tantamount to the Legislature. Taylor neither confirmed nor denied whether the meeting, in fact, took place.)

Secretary of State Scott later responded to Taylor and included the Observer in his response: "Great reply."

In the months that followed Biden’s win, Texas Attorney General Ken Paxton filed a string of frivolous lawsuits seeking to overturn electoral results in other states, all of which were dismissed. Gov. Abbott, who hadn’t gone as far as to say the vote had been rigged, deemed “election integrity” a priority issue for the 2021 legislative session. Republican state lawmakers filed a slew of bills that aimed to tighten restrictions around voting.

The month before Scott's appointment, Texas officials had announced what they called a full forensic audit of the November 2020 elections in four counties: Collin, Dallas, Harris and Tarrant. That announcement came some eight hours after Trump had urged Abbott in an open letter to carry out a "Forensic Audit of the 2020 Election," adding: "Texans know voting fraud occurred in some of their counties."

In December 2021, Scott agreed to meet in Austin with Byrne, according to the text messages obtained by American Oversight.

A controversial figure, Byrne had lost his job in 2019 after it was revealed that he’d been in a romantic relationship with Maria Butina, an alleged Russian foreign agent who’d reportedly forged deep ties in the Republican Party and the National Rifle Association. Butina went to prison for 15 months on charges related to trying to influence U.S. policy, and Byrne later claimed without evidence the FBI had ordered him to pursue that relationship. (The FBI has dismissed that claim.)

More recently, Byrne has landed in the national spotlight over his plans to speak with the Congressional committee investigating the Jan. 6, 2021, riot at the U.S. Capitol, when Trump supporters stormed the building and attempted to prevent the certification of the electoral results.

Byrne reportedly had Trump’s ear, and along with others, pushed the idea that the then-president could order the National Guard to seize voting machines and keep Trump in office, as reported by the Washington Post.

In their December 2021 text messages, Byrne told Scott that he had attended a "Reawaken America" convention in Dallas with Flynn, a longtime star among QAnon conspiracy theorists, and Eric Trump, the one-term president’s son. Byrne went on to claim that state Sen. Angela Paxton, the attorney general’s wife, had passed on Scott’s contact information because she believed Byrne had information Scott ought to know. (Paxton didn't respond to request for comment. Both Paxtons were present at the Jan. 6 rally that preceded the riot at the U.S. Capitol.)

"You see, we have the election integrity movement," Byrne told Scott via text. He added that he would be "honored" to meet with Scott, who offered to see Byrne at his office in the State Capitol. Byrne also sent Scott a link to a Rumble video in which the former Overstock CEO warned of the “deep state” at the Dallas convention.

At one point in that 45-minute video, Byrne claims that a “Marxist-Leninist regime change plot” was taking place in the U.S. He falsely claims that vaccinated people over 60 years old died of COVID-19 at higher rates than the unvaccinated. Citing a “rigged election,” he casts doubt on results in Georgia, Michigan and Wisconsin. “It’s quite likely I get arrested or killed,” he adds, apparently meaning that he would be killed for revealing the supposed secrets.

Bizarre or not, that video apparently didn’t deter Texas’ secretary of state. In the text messages, after nailing down a meeting time at Scott's office, Scott replied, “Thank you!!!”

A voicemail to a phone number associated with Byrne and an email sent to his nonprofit group, The America Project, went unreturned.

Critics argue that Scott's supposed meet-ups are emblematic of the GOP's attempts to subvert democracy. Ike Hajinazarian, deputy communications director for the Texas Democratic Party, accused Republicans of promoting lies about the 2020 election in an attempt to hold onto power.

Hajinazarian also contrasted the state GOP's voter restriction efforts with Democrats' push to safeguard the right to vote. "Maybe instead of meeting with conspiracy theorists, Texas Republicans could take a moment to meet with us to discuss how to prevent a recurrence of their failures in implementing vote-by-mail processes, as happened in the primary," he said by email.

Matt Angle, founder of the Lone Star Project advocacy group, has been a vocal critic of Scott since his appointment last year.

He described Scott as "part of a network of partisan and harshly ideological operatives — some of them lawyers, some of them politicians, some of them consultants — who have been working for years to suppress participation in elections, particularly among people of color.

"I don't think we should focus all of … our concern at John B. Scott. He's in that position because of Greg Abbott, and Greg Abbott is the point of the spear of vote suppression in Texas for over a decade," Angle said. "From the day that Greg Abbott was appointed Texas attorney general, he's made it a central part of his mission to go to wars with Texas voters and suppress the vote in any way that he can."

In reply to an emailed request for comment, Abbott's press secretary Renae Eze wrote: "The Texas Secretary of State should and does meet with everyone who has an opinion or a concern that involves his portfolio, even hosting bipartisan town halls with Democrat and Republican members. Being open and transparent with all sides is the best way to ensure confidence in our systems."
KEEP THE DALLAS OBSERVER FREE... Since we started the Dallas Observer, it has been defined as the free, independent voice of Dallas, and we'd like to keep it that way. With local media under siege, it's more important than ever for us to rally support behind funding our local journalism. You can help by participating in our "I Support" program, allowing us to keep offering readers access to our incisive coverage of local news, food and culture with no paywalls.
Make a one-time donation today for as little as $1.