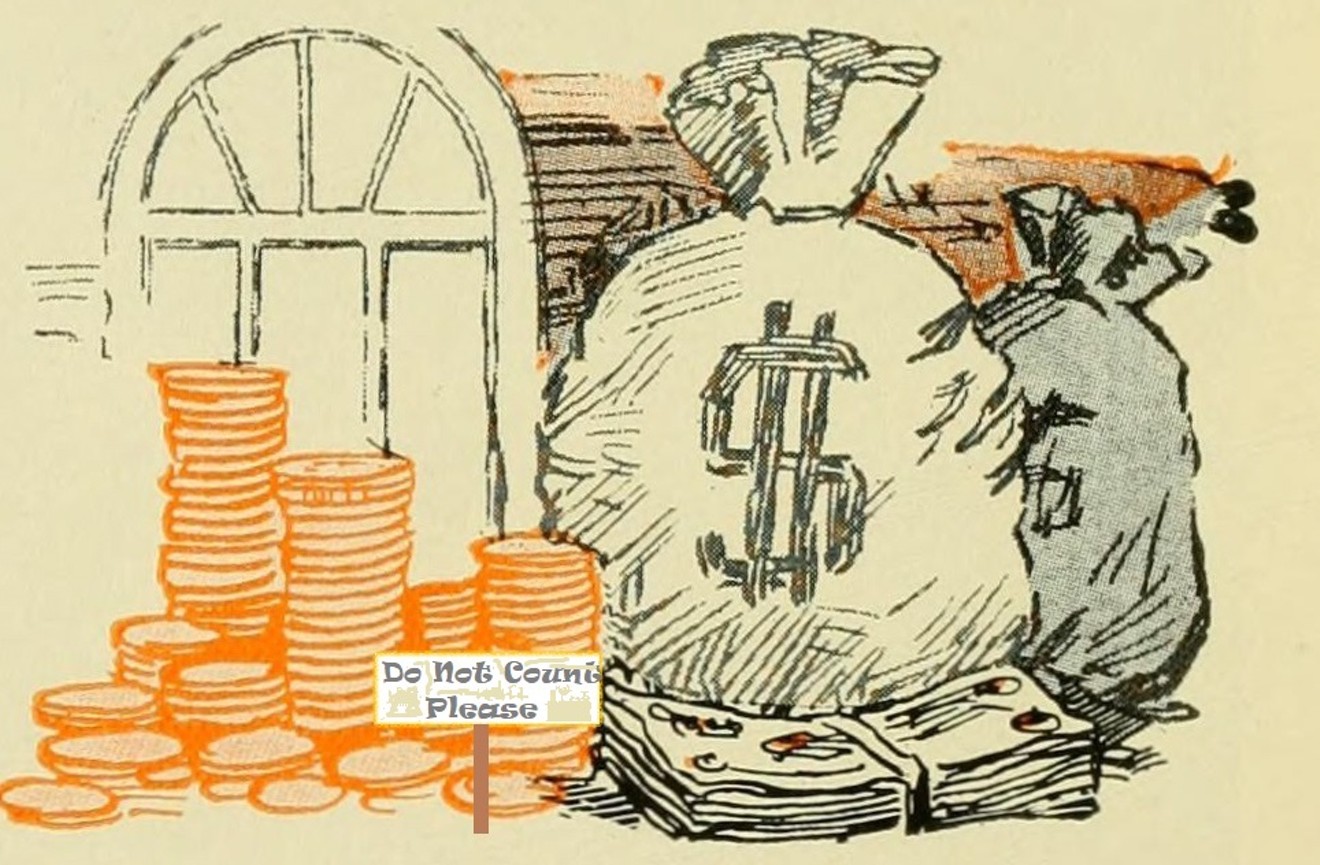 HUD Secretary Ben Carson may not understand that HUD doesn't count its money because HUD doesn't want to count its money. apologies Southern Railway System
This is intriguing. Ben Carson, who is Trump’s secretary of Housing and Urban Development, has announced (see below) a new initiative imposing a system of spending controls on the agency, which spends $60 billion a year. You might wonder why somebody didn’t think of that before.

We know all about HUD money in Dallas. Or perhaps I should say more accurately, “We know nothing.” But that’s just what we say if the person asking the question has a badge. In truth, we know way more than we ever wanted to know. We know things we wish we could forget.

For example, we know that HUD doesn’t want to know where its billions go after the money leaves HUD’s hands. It sort of dumps the money out of train cars in bales at certain locations. The train rolls off. What happens to the money after that is not HUD’s lookout unless some troublemaker comes along and forces HUD to do an accounting, which HUD hates.


It’s not that HUD doesn’t know how to count. HUD does not want to count. It actively and stubbornly resists counting.

That was the story in Westchester County, New York, where hundreds of millions in HUD dollars had been misspent over a period of decades. Even when HUD was informed, HUD refused to do anything about it and would never have lifted a finger except that three nonprofit agencies finally took HUD to court and got a federal judge to order HUD to count its own money.

Why? Two reasons. One, it’s free money. It’s not like HUD has to earn the money. This is $60 billion a year that Congress gives HUD and says, “Here, go spend this.” Two, the spending of the money makes people happy, but the counting of the money has the potential to stir up all kinds of trouble, perilous pitfalls and career-breaking moments.

Take the issue of racial segregation, for example. Carson has never believed that government in general or the federal government in particular can have a legitimate role in desegregating the society through policy. In an op-ed essay in the conservative Washington Times newspaper published a year before the Trump election, Carson compared HUD’s official desegregation policy, called affirmatively furthering fair housing, to what he called failed socialism.

“These government-engineered attempts to legislate racial equality create consequences that often make matters worse,” Carson wrote in 2015. “There are reasonable ways to use housing policy to enhance the opportunities available to lower-income citizens, but based on the history of failed socialist experiments in this country, entrusting the government to get it right can prove downright dangerous.”

That may be all well and good for Carson to believe, but it puts the agency itself in a bit of a pickle. Affirmatively furthering fair housing, shorthanded as AFFH, is not a policy or a philosophy. It’s not an attitude or belief. AFFH is the law, a thumbnail summary of a series of federal laws and interpretations of law by the courts, all commanding that HUD money can only be spent in ways that decrease racial segregation and increase integration — AFFH, in government-speak.

Let’s go back to the business of pickles, then. The heart of Westchester County is an affluent suburban district 15 miles northeast of Manhattan. Tons of wealthy, important, powerful people of both Republican and Democratic stripe live in very expensive homes in Westchester, and pretty much nobody there of any stripe wants federally subsidized housing for the poor next door if they can help it.

But HUD didn’t want to count the money and definitely did not want to demand that it be repaid because HUD knew exactly what kind of hornet’s nest that would arouse. You and I as individuals, we may think of a vast federal agency like HUD as almost omnipotent, and it would be if its boot were on our individual necks. But HUD knows that the kind of people who live in Westchester County can use congressional and even White House connections to put an even bigger boot on HUD’s neck.

Even when a federal judge ordered HUD to count its money and ordered HUD to enforce the law under AFFH, the Westchester wars were not over. Last year, with Donald Trump in the White House, a struggle that had ground on miserably for more than a decade was resolved: HUD folded, handing victory and vindication to Westchester County.

Probably no defeated party in history was ever happier or more relieved to be defeated and to have it over and done with. Presumably HUD can dole out hundreds of millions of dollars to Westchester from now until the cows come home and never have to count a penny. Unless, of course …

Now we’re back to the pickle. The new secretary of HUD says he wants to impose strict spending controls on the agency. If he succeeds, that will mean HUD will have to get on the muscle again about making sure its billions are being spent the way they’re supposed to be spent, which in government means according to the law.

The law, as we know by now, is AFFH. We also know that Carson does not believe in AFFH. Hence, pickle. In fact, this is exactly the kind of pickle we’re in now, here in Dallas.

For the last year, Dallas City Hall has been more or less permanently inhabited by a shadow-army of investigators from the HUD Office of Inspector General. The OIG people are searching for what may be hundreds of millions of dollars in HUD money that Dallas has been carrying on its books as “lost.”

Back to you and me as individuals: We might assume that in a case where a sum of hundreds of millions of dollars in federal government money has been categorized as “lost,” one or more persons probably will wind up in a place categorized as “prison.” That feels like the way the world works.

But that is not the way HUD works. The missing money here is from those bales tossed out of the train by HUD officials shouting from the open boxcar, “Please! Don’t tell us what you do with it!”

The OIG investigators are here only because of a couple of stories we have told you about too many times — the Lockey and MacKenzie litigation and a very inconveniently honest audit by the Dallas city auditor. Curtis Lockey and Craig MacKenzie are two developers who blew the whistle on Dallas for misspending HUD money almost 10 years ago, forcing HUD, very much against its will, to count the money and finally, grudgingly, to agree that Dallas had misspent vast sums.

Ben Carson
Gage Skidmore
In 2015, then HUD Secretary Julian Castro and Dallas Mayor Mike Rawlings struck a political deal: Just when it looked as if Dallas might have to pay back hundreds of millions, Castro declared a five-year HUD investigation null and void, thereby returning the misspent millions to their customary uncounted status and relieving Dallas of any obligation to repay.

But then in 2016, in the months just before Trump was elected, Dallas City Auditor Craig Kinton greatly irritated parties on both ends with a key finding. Money that is lost, Kinton said in an audit, is still lost, even if people say they don’t care.

Apparently, under the procedures of the Association of Chartered Certified Accountants, there's not even a category for “don’t care.” You still have to try to find out where the money went, who’s got it, do they live in a large castle in Spain, etc.

Here is my projection, and I want you to remember that you heard it here first. A century from now, custodial workers trying to track down rogue cooking odors from wall vents on the top floor of Dallas City Hall will find a strange race of people living in crawlspaces who are the grandchildren of the original OIG investigators, subsisting on left-over party food and practicing a religion based on the maxim, “Always look, never find.”


The law, as we know by now, is AFFH. We also know that Carson does not believe in AFFH. Hence, pickle.

Well, that’s unless a century earlier, HUD Secretary Ben Carson succeeded in imposing a system of businesslike spending controls on HUD. In that case, it will be a whole new ballgame at HUD and everywhere HUD dumps its bales of billions from the train.

If there are real spending controls, as Carson now proposes, then the OIG investigators will be required by those controls to tell the people back at headquarters the truth. They will be required, in fact, by the secretary’s own new spending controls, to tell the secretary that Dallas and other local governments spent hundreds of millions in HUD dollars in ways that did not affirmatively further fair housing — that is, did not decrease racial segregation and did increase racial integration.

And so, rather than risk getting us into yet another pickle, I suggest we do the polite thing now: back out softly and leave the secretary alone in his office, gazing out the window at L’Enfant Plaza with a motionless mask of benign puzzlement affixed to his face.