Thanks, Zuck, but Maybe We Should Stick with T.J. on This One 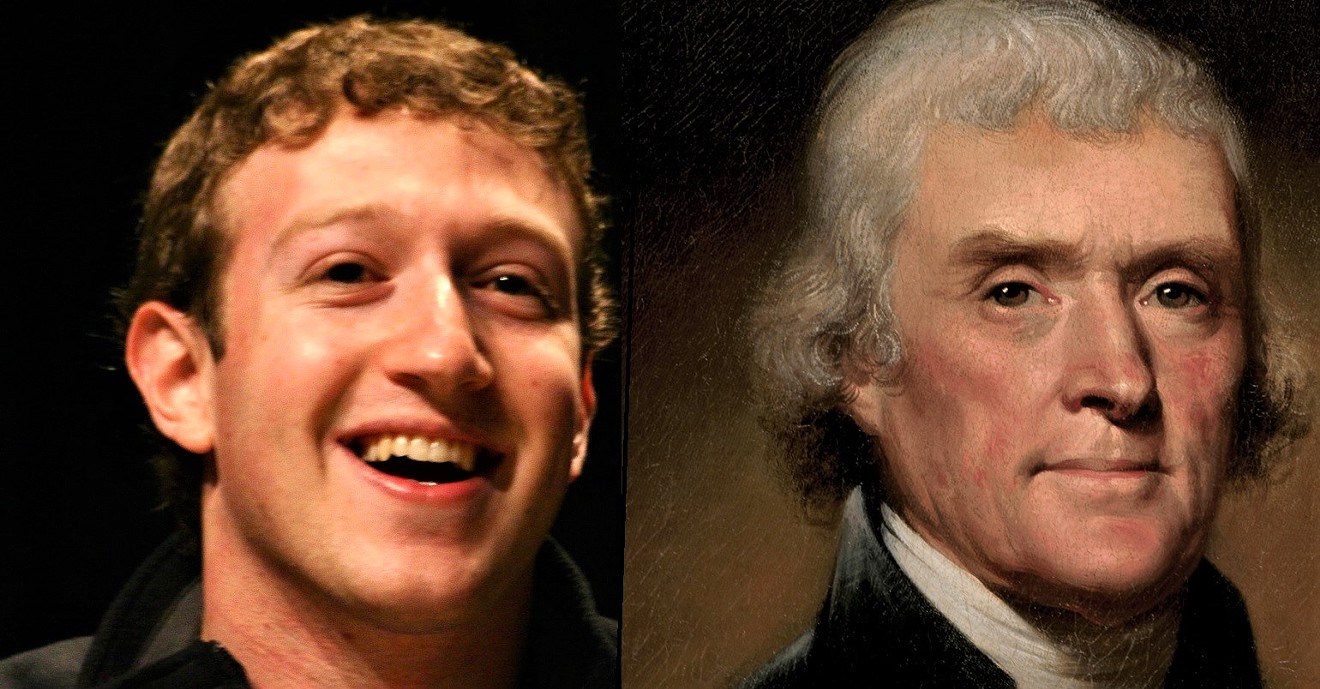 Given a choice, maybe we should trust our basic liberties to the guy on the right. apologies Rembrandt Peale, Jason McELweenie/Wikipedia
Facebook announced last week it will begin expurgating from its pages types of speech that the site believes may lead to actual violence, as opposed to just offending the hell out of people.

I’m thinking thanks, Mr. Zuckerberg. I get it. I see why you’re doing it, but I wish we could just to stick with the Constitution on this one. Somehow I’m not ready to fall on my knees by the bed at night and pray to Facebook to preserve me from evil.

I admit that I wonder if I’m whom they want to preserve. My suspicion is that they’ve got at least one big eye on the bottom line. If I’m wrong, if Facebook really is out to protect the world from violence caused by speech, then this announcement sounds like one hell of a cattle call for underemployed philosophers, clerics, political scientists and legal thinkers the world over.

Smart people have been working on this stuff for a long time — at least since Hammurabi, sixth king of the first Babylonian dynasty, 1792-50 B.C., that I know of. Facebook may need a whole new division to house them all. Maybe they could even call it the Hammurabi Division.

Here in Dallas, I would like to say thanks but no thanks to Facebook CEO Mark Zuckerberg. My inclination is to stick with the dinosaur algorithms in the Bill of Rights. And it’s not like we haven’t had terrible violence here in Dallas, some of it at least nominally associated with hate speech on Facebook.

In downtown Dallas on July 7, 2016, five police officers were murdered and seven more wounded by an armed and armored man who had been spewing hate speech on Facebook for weeks. Hateful speech online also cuts close to home for me for another reason — because of what I do for a living and where I do it.

Two weeks after a gunman murdered five people at a newspaper in Annapolis, Maryland, President Donald Trump began a Twitter campaign calling journalists “indeed the enemy of the people.” It seems to me speech like that at least theoretically could inspire another newsroom attack. But right there is where we get into the mess. Speech, especially free speech, is a very messy business.

For example, most of the people I know in the news business have some haunting sense that there may be some kind of ritual and mimicry — what we call copycat syndrome — in American mass shootings. In some of the school incidents, for example, young shooters have even dressed themselves in Columbine costumes. They choose weapons of a certain appearance.

So where do they get that stuff — the costumes, the style of weapon, the ritual itself? They get it from us, the news media. How else would they even know?

I realize nobody has drilled down to root causes. By the way, I think we’ve been working on that one since even before Hammurabi. But no reasonable person who has worked in media for more than a couple of years can doubt that there is some element of copycat syndrome going on in the mass shootings. The only thing they have to copy is us — what we tell people.

Back to Trump and “enemy of the people.” I hate that crap. But how do I point the finger at Trump for stirring up the crazies without taking at least a peek at myself in the mirror?


“We have identified that there is a type of misinformation that is shared in certain countries that can incite underlying tensions and lead to physical harm offline.” — Tessa Lyons

Free speech is a mess. The president has a lot of power inherent in his position, so he must be held to a higher standard. But c’mon. The media don’t have power? The sheer compulsion of people to be on TV, almost for any reason, good, bad or ugly, is at least half of it.

The scene in the movie is always the media wolf pack hunting down its victim (more on the wolf thing below). What the public never sees are the parents of the shooter standing on their doorstep with the dish trucks parked on their grass, and they’re combing their hair and tending to makeup for their close-ups. It’s a strange, powerful chemistry.

Media, especially the electronic kind, are incredibly powerful as both push and pull, pushing out the story, sucking in the people who are parts of the story. We in any of the media would be laughably self-serving to deny the role of media collectively in purveying cultural, moral, psychological rituals — copycat-isms — some of which are evil.

We have at least the same role in promoting rituals of good, both by telling the stories of people who do good and by exposing those who do wrong. So what should we do? Just stop telling you anything at all? Or should we do what Zuckerberg seems to be proposing and only report things in ways that won’t hurt anybody? If the new Hammurabi Division can figure that one out for Facebook, it will be a first for all of human history. We don’t know what helps or hurts.

I picked up an interesting tidbit about angry, crazy kids the other day while walking my dogs. I bumped into a guy I have known for a long time, recently retired, a Vietnam War combat veteran and former SWAT cop who spent the last many decades of his career working with the homeless.

In chatting, he mentioned a thing he had noticed about angry, crazy, violent kids over the years. He said they tend to keep journals. In those journals, he said, they name all of the people they want to kill. Some of the journaling they do is manuscript, he said, on pages of well-cached notebooks. But a lot if it is on Facebook. So does the journaling cause the violence or sublimate it? Nobody knows that. Dallas was deeply scarred by the murders of five police officers and the wounding of seven more on one terrible night in 2016. But is Facebook to blame?
Brian Maschino
Before Micah Xavier Johnson murdered five police officers and wounded seven more in Dallas in 2016, he was all over Facebook spewing racial hatred of white people, white cops in particular. Someone will want to stop me here and point out that Johnson’s wrath was in response to what he saw as racist aggression against black people by white cops. That’s a good conversation for some other day.

My question here is this: Had Mark Zuckerberg been able to bar Johnson from Facebook, would that have stopped Johnson from shooting police officers in Dallas? It might have helped Zuckerberg by taking Facebook out of the equation, but would it have changed the equation for Dallas?

Maybe I don’t have to worry about Facebook anyway. The new Facebook expurgation policy sounds as if it is aimed exclusively, for now, at non-European countries, especially Sri Lanka, Myanmar and India. A person identified as a Facebook product manager told The New York Times, “We have identified that there is a type of misinformation that is shared in certain countries that can incite underlying tensions and lead to physical harm offline.”

“Offline” is a corporate Facebook term for “real life.” “Certain countries” means nonwhite. Tessa Lyons, the product manager, said, “We have a broader responsibility to not just reduce that type of content but remove it.”
From real life? From the nonwhite world? Or just from Facebook? Whose interests are at stake here?

Is the contention that the peoples of Sri Lanka, Myanmar and India only discovered sectarian violence when they started looking at Facebook? And now, if they can no longer journal their hatred on Facebook, do we think the hatred will melt away and the violence with it?


“Nothing can now be believed which is seen in a newspaper. Truth itself becomes suspicious by being put in that polluted vehicle.” — Thomas Jefferson

Free speech has always been sort of awful. Thomas Jefferson, a father of the First Amendment, champion of a free press and president from 1801-09, was hounded by people who hated the press of his time and wanted him to help them bring it to heel by supporting tougher libel laws. They had good reason to think Jefferson might lend a hand.

Trump has never said anything about the press half as angry or caustic as what Jefferson had to say, repeatedly.

“It is a melancholy truth,” Jefferson wrote in a letter, “that a suppression of the press could not more completely deprive the nation of its benefits than is done by its abandoned prostitution to falsehood.”

In case anybody missed his point, he also said, “Nothing can now be believed which is seen in a newspaper. Truth itself becomes suspicious by being put in that polluted vehicle.” He called journalists fiends who “ravin on the agonies of their victims, as wolves do on the blood of the lamb.”

But he refused to support the efforts to rein in the press. The big thing, he said, was not so much the free press but free speech itself, and for free speech to flourish, we had to have a free press. It was a necessary evil, the price we had to pay.

“The force of public opinion cannot be resisted,” he said, “when permitted freely to be expressed. The agitation it produces must be submitted to. It is necessary to keep the waters pure.”

That’s why I hope we can say thanks but no thanks to Zuckerberg’s offer, at least in this country. Our present system, after all, is based not just on what the founders wrote in the Constitution and Bill of Rights but on several thousand years of trial and error — a lot of it, by the way, in nonwhite places. I’m not ready to turn all of that over to a tech dude.
KEEP THE DALLAS OBSERVER FREE... Since we started the Dallas Observer, it has been defined as the free, independent voice of Dallas, and we'd like to keep it that way. With local media under siege, it's more important than ever for us to rally support behind funding our local journalism. You can help by participating in our "I Support" program, allowing us to keep offering readers access to our incisive coverage of local news, food and culture with no paywalls.
Make a one-time donation today for as little as $1.