The Texas Rangers' Public Integrity Unit investigated the allegations and reported their findings in the affidavit. It alleges that Smith committed third-degree felony theft. Kagenmi / iStock
A consultant for Sid Miller, the agriculture commissioner, was arrested last week for allegedly soliciting money and campaign contributions in return for hemp licenses from Miller's department.

The consultant allegedly behind the scheme is a guy named Todd Smith.

“Todd Smith created by words and his conduct, a false impression of fact that affected the judgment of others in the transactions to obtain a hemp license and/or conduct a survey that was never attempted by Todd Smith," according to an affidavit obtained by The Texas Tribune.

The Texas Rangers' Public Integrity Unit investigated the allegations and reported their findings in the affidavit. It alleges that Smith committed third-degree felony theft.

House Bill 1325 legalized the production of hemp and amended the Texas Agriculture Code to put the department in charge of regulation.

Andre Vinson wanted to get into the hemp industry,  and knew several landowners, farmers and people in the CBD business. A person named Keenan Williams approached Vinson at a social gathering. Williams allegedly told Vinson that they were working with senior leadership at the Texas Department of Agriculture and that only 15 hemp licenses would be issued in the whole state.

Williams told Vinson that he had coughed up $150,000 in cash, with some of it going toward campaign contributions in order to guarantee his license.

Vinson decided to do the same, getting the money together from his business associates. One of those associates was Hannah Smith.

In August, 2019, Smith met Williams in Dallas County at a Legacy Bank. In the parking lot, Smith handed over $25,000 to Williams, per Vinson’s request. Vinson thought the money was for a hemp survey required to get his license. He never received any more information, an agreement, invoice, or results of the survey. However, the details of this transaction were spelled out in text messages between Williams and Todd Smith.

But Williams eventually convinced Vinson another $25,000 was needed to obtain his license. Vinson instructed Hannah Smith withdraw the additional money and give it to Williams. 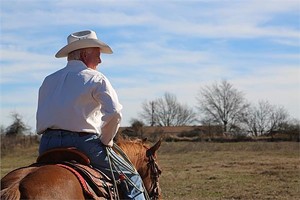 Todd Smith is Texas Agriculture Commissioner Sid Miller's top political consultant.
State of Texas
Todd Smith never registered Williams, Vinson or his partners as clients of his lobbyist services that year. Additionally, there were no TDA ethics visitor reports from July 1, 2019-March 19, 2020, which would have been required if Todd Smith was acting in his lobbyist capacity before the department or the commissioner.

Vinson only had one conference call with Todd Smith and Williams about the hemp license. Williams told Vinson not to talk about money when Todd Smith was on the call.

Then, Williams coordinated an early November, 2019 meeting at the Texas Department of Agriculture’s offices in Travis County. Williams also asked for additional funds prior to the meeting. Vinson and Hannah Smith drove from Austin to Dallas for the meeting on Nov. 6 that year. Vinson brought $10,000 with him and withdrew $20,000 more.

In a car outside Austin restaurant El Mercado, Vinson handed over $30,000 to Williams. They were about a block away from the department’s offices. Before they could all meet at the offices, Williams wanted to run the cash up there alone. Williams returned about 20 minutes later and brought Vinson and Hannah Smith back to the office.

Later that month, Vinson found out from the Texas Department of Agriculture that Williams had not been guaranteed a license and there wasn’t a cap on how many the state could give out. Until then, Vinson had been under the impression from Williams that he needed to spend $150,000 in payments to consultants and elected officials to get his license.

Vinson reached out to Todd Smith about all the money, but he denied knowing anything about it.

The whole time, Williams thought all the transactions were legitimate. He wanted to be discreet about the whole process because they were going through Todd Smith and thought that only a limited number of licenses would be given out. Williams was under this impression because that’s what Todd Smith told him.

In a conversation about the survey money, Williams said in a text to Todd Smith: "When do you need the $25,000? I know you said 72 hours, so I’m thinking before or after lunch."

Todd Smith responded, “Yesterday, but after lunch is fine.”

He’d been telling others the same thing about the licenses, including William “Bill” Cavalier of Green Grow Farms Texas, LLC, a hemp business. Cavalier gave Todd Smith $25,000 for the hemp survey. This was all happening around the same time Williams, Vinson and Hannah Smith were coughing up their cash, August 2019.

In March of the next year, Cavalier followed up with Todd Smith about the survey. Todd Smith told him that while he received the money, the survey was never attempted. Cavalier responded by email demanding the money be wired back. Todd Smith never responded and Cavalier didn’t get his money.

Todd Smith tried to pull to other’s in the hemp industry into his scheme, but was unsuccessful.

It’s alleged that he unlawfully appropriated property, specifically $55,000 with intent to deprive the owners of the property and commit theft of more than $30,000, but less than $150,000. This is a third degree felony. Neither Todd Smith or Sid Miller responded for comment.

Arrested Thursday night and booked into the Travis County jail, Todd Smith was released early Friday morning with a bond set at $10,000.
KEEP THE DALLAS OBSERVER FREE... Since we started the Dallas Observer, it has been defined as the free, independent voice of Dallas, and we'd like to keep it that way. With local media under siege, it's more important than ever for us to rally support behind funding our local journalism. You can help by participating in our "I Support" program, allowing us to keep offering readers access to our incisive coverage of local news, food and culture with no paywalls.
Make a one-time donation today for as little as $1.