Venice Sued Calatrava for Their Bridge. Ours Is Worse. Why Don’t We Sue? Two years after completion, our Calatrava bridge is still so unsafe we can't even open it. So why aren't we suing, like Venice, Italy? Jim Schutze
Look at it this way. An Italian court has ordered Spanish architect Santiago Calatrava to pay the city of Venice a $85,000 fine just because a bridge he designed there is too slippery. The two gigantic pedestrian bridges Calatrava built for us in Dallas, completed in 2017, have never even been opened to traffic.

The Margaret McDermott hike and bike bridges over the Trinity River at I-30 can’t be opened, because the bridges are too wobbly. But Dallas City Hall not only is not suing anybody: It’s sticking the taxpayers for $7.1 million to take the wobbles out.


The hike and bike bridges were a kind of architectural fiction in the first place.

Wait. It’s worse. No engineer has certified that the $7.1 million repair that you and I are paying for will take the wobbles out. They hope it will.

That’s like the plumber telling you, “Well, let’s replace all the drains under your house and see if that makes the bad smell go away.” Think how you’ll feel when you pay for that and the bad smell is still there.

The bad smell on the Dallas Calatrava hike and bike bridges is gag-worthy. There is every chance that the $7.1 million won’t do the trick.

The hike and bike bridges were a kind of architectural fiction in the first place. The Ladies of the River, as I call them — the rich Park Cities doyennes who spurred City Hall to do any number of catastrophically stupid things 20 years ago — always felt Dallas did not look enough like a gorgeous European city. And guess what. Dallas didn’t look anything like a gorgeous European city. It also didn’t look like a toaster.

But they thought building a series of fake suspension bridges up and down the river downtown would make Dallas look European. Even if they had been able to build all those bridges, to make it work they would have had to ban anybody driving on the bridges wearing wife-beaters and Resistol cowboy hats: “We ask you to wear this disposable scarf and beret until you get to the other side.”

But they couldn’t build that many fake suspension bridges, because it would have cost more than the gross national product of Brazil. They wound up getting one little shorty built, a down-sized knock-off of a bridge Calatrava had already designed for a city in Europe. Then they thought they needed at least one more to create the European effect. That’s how we got McWobbly.

The old bridge was not on the national list of bridges that needed to be replaced; replacing it was probably just an excuse to build McWobbly; but at least we didn’t have to pay for the real highway bridges. But we did have to pay for the fake Calatrava add-ons. They cost $115 million — almost as much as the real bridges.

The Calaltrava add-ons are two huge arches, 1,200 feet long and 350 feet high, smacked up next to the sides of the freeway bridges but contributing nothing to them as support. The idea was to make the whole thing look like one big Calatrava bridge.

Think about this. The Calatrava bridges here were always going to be fake suspension bridges to begin with, because we didn’t really have anything to suspend over. We’ve got a big ditch that the late daredevil, Evel Knievel, could have jumped over on a motorcycle had he not come to an untimely demise in 2007. Why would we build gigantic suspension bridges?

But we’re this far anyway, so let’s dive deeper into the inanity. The Calatrava bridges actually are not suspension bridges at all. They are cable-stayed bridges. It’s different.

In a suspension bridge, the traffic deck hangs passively on cables from strong over-arching members. A cable-stayed bridge is more like a wheel or triangle: the deck itself is an equal partner in the stiffening and load-bearing capacity of the whole structure. So the deck needs to be as strong as the arches.

But the arches on our two bridgettes next to the I-30 freeway bridges didn’t really have decks to carry, certainly not one deck to share between them. They were just decorations. And maybe they would have been all right on their own that way. They are big, fat steel mothers.

But the Ladies of the River could not acknowledge — nor could mayors and city managers of the time — that this $115 million public expense was for two double-fake decorations. So Calatava hung little spindly decks from both arches, and we were told that these were hike and bike bridges. That way they had a purpose, so-called.

Never mind that nobody wanted to hike or bike anywhere near that location. No trails led to the bridgettes. And never mind that there would be no reason to build two hike and bike bridges at any one location. How about just one? If the people on the bikes going in opposite directions thought they might run into each other, they could squeeze their little rubber honk-honks on the handlebars. That concession alone would have saved the taxpayers $57.5 million, honk-honk.

Notably, when McWobbly was nearing completion two years ago, the city always referred to the four totally independent structures as if they were one bridge: The Margaret McDermott. The very strong suggestion was that the public should look at these four edifices and see only one bridge. And please don’t ask me how many magnitudes of fakery that brings us to, or I’ll have to go take a nap.

We have two seasons of very high wind up and down the Trinity River corridor every year, spring and fall. Almost as soon as the little spindly hike and bike decks were hung from the huge arches, the cables tying them to the arches began to snap. When they snapped, the cables swung out over the traffic lanes on the freeway bridges. 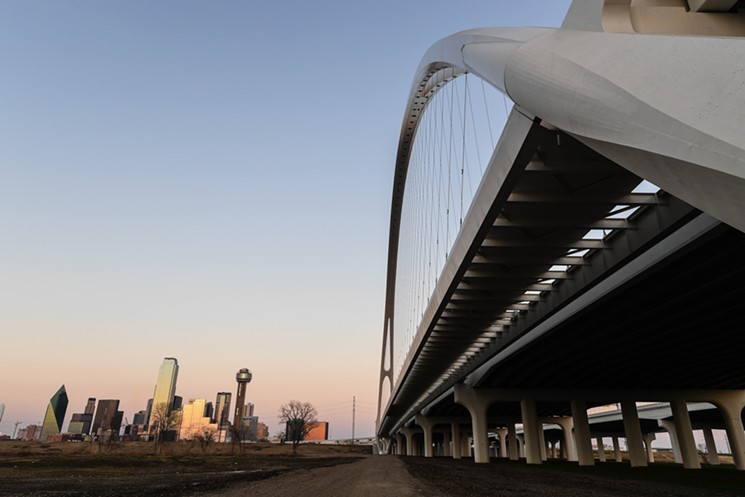 The arches on McWobbly are decorative add-ons that contribute nothing to the strength of the vehicular bridges they abut.
Jim Schutze
Of course the city began immediately trying to strengthen the cables, but that didn’t work. They still snapped. If you go out there now, you will see that the cables are tied down with a jury-rigged system to keep them from swinging if they do snap.


What if this so-called bridge, which is not a real bridge in the first place, born in vanity and executed in fakery, suffers from an original sin or sins?

The fix the city has in mind for $7.1 million involves swapping out the cables for some really, really strong ones. But here is the important question that no one has addressed publicly: What if the real fault is not in the strength of the cables at all but in the disproportionality of the decks to the arches?

Bear with me. In a cable-stayed bridge, the deck is an equal partner with the arches. The cables are not holding up the deck. They are transferring strength between the deck and the arches like two hands clasping.

What if the decks on McWobbly are just too light, too bouncy-bouncy? What if this so-called bridge, which is not a real bridge in the first place, born in vanity and executed in fakery, suffers from an original sin or sins? What if it suffers from three things: 1) Screwed, 2) Glued and 3) Tattooed? Might be nice to know before we pay the plumber.

The Italian court found Calatrava liable for a form of negligence called culpa lata in ancient Roman law. Culpa lata is one of two kinds of negligence the court had to consider. The other was culpa levis.

Culpa levis is negligence brought about by a lack of the kind of diligence that a prudent person would have brought to bear. Culpa lata is worse. The full description in Latin is “intelligere quod omnes intellegunt,” that is, a failure to understand what everybody understands. In American law, culpa lata has been expressed as “the omission of that care which even inattentive and thoughtless men never fail to take care of their property.”

So if this whole very expensive dilemma is the fault of idiots, why are we not suing the idiots? Why are we not doing what Venice did? For that answer, we have to dive a bit deeper into idiocy, and I hope you will monitor yourself for cramps.

We are the idiots.

Like many Calatrava projects, the McWobbly flew up out of the early cost estimates quickly and began to look as if it would cost taxpayers a lot more than originally promised. In order to hold back that bad news, city staff appointed itself to look for cost savings in the design. One of the first things that occurred to them was to pencil in thinner cables.

Calatrava warned them not to do it. He said it would be necessary to subject the new thinner cables to expensive stress tests at a lab in Switzerland. But the staff didn’t want to incur the cost of the tests. They said it didn’t make sense to pay for the tests when there was no guarantee the cables would pass.

Well, sure. That’s why it’s called a test.

The city decided to roll the dice on the wobbly cables without the test. By the way, among the people who made those decisions, not a head has rolled.

In the double-fake suspension bridges at McWobbly, the River Ladies wanted something that would become an iconic symbol for the whole city — the first thing people elsewhere would think of when they thought of Dallas. I think we should rig both of them with gelignite and blow them to kingdom come. I would rather be thought of that way, and there won’t be anybody on them anyway when we blow them up. Win win.
KEEP THE DALLAS OBSERVER FREE... Since we started the Dallas Observer, it has been defined as the free, independent voice of Dallas, and we'd like to keep it that way. With local media under siege, it's more important than ever for us to rally support behind funding our local journalism. You can help by participating in our "I Support" program, allowing us to keep offering readers access to our incisive coverage of local news, food and culture with no paywalls.
Make a one-time donation today for as little as $1.