Matt Wood took a nosedive on election day. Joe Pappalardo
Nothing that happened during Saturday's Dallas City Council election can really be called a surprise. There was certainly some intrigue, some 671 mail-in ballots remain sequestered under court order in Districts 2 and 6 after fraud concerns. And at least one incumbent, Carolyn Arnold, will lose her seat on the council. When the new City Council convenes in June, however, it will look much the same as it will at its next scheduled meeting on Wednesday.

Here's a breakdown of the results so far, as of late Saturday night. 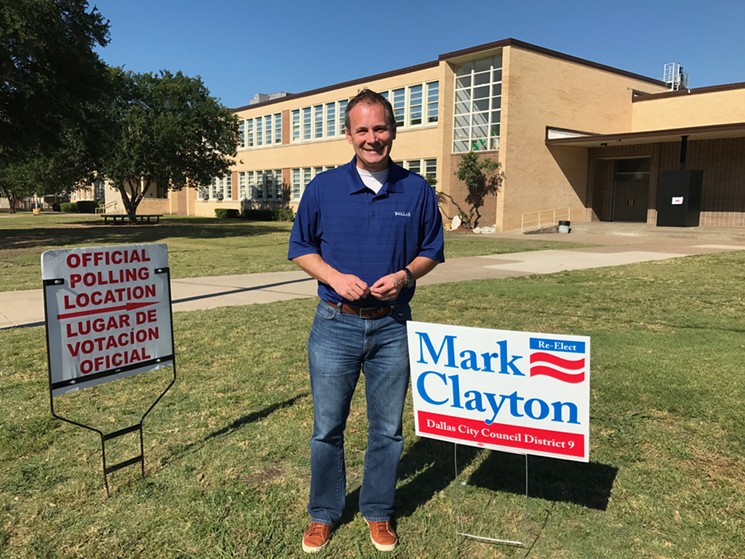 Mark Clayton, putting up his own campaign signs Saturday morning.
Alyson Sheppard
The incumbents who hung on. — Rickey Callahan withstood a challenge from Dominique Torres in District 5, hanging on to win by 10 points. Callahan won his third city council election in a row, despite looking vulnerable each time. Callahan is a conservative white man in an overwhelmingly Latino and Democratic district, but he continues to turn out just enough voters — 898 with one precinct outstanding this time — to win.

In District 11, Lee Kleinman withstood a heavy push from Dallas' police and firefighters unions, which backed opponent Candy Evans. On Saturday night, Kleinman told the Dallas Observer that his 27-point victory was a "clear message that protecting the taxpayer's interest was a priority" for voters.

District 14, perhaps the most highly anticipated council race, ended up being a snooze. Incumbent Philip Kingston cruised past challenger Matt Wood by 13 points, despite Wood being endorsed by The Dallas Morning News, former Dallas police Chief David Brown and former Dallas Mayor Ron Kirk. The hundreds of thousands of dollars For Our Community, the PAC run by Dallas Mayor Mike Rawlings' campaign consultant Mari Woodlief, didn't even keep things all that close.

The incumbent who didn't. — Dwaine Caraway won his old seat back from Carolyn Arnold in District 4. Despite endorsing Arnold two years when he couldn't run due to term limits, Caraway came back to win a council seat for the fifth time Saturday. Throughout the race, Caraway criticized Arnold for opposing new development like the proposed deck park near the Dallas Zoo, while Arnold said she was sticking up for her constituents, rather than big projects. Despite Arnold's highly visible support of John Wiley Price at his recently completed trial, she lost to Caraway by a little more than six points.

The runoffs. — Districts 6, 7 and 8 are all headed to June 10 runoffs. In District 6, incumbent Monica Alonzo will make the runoff, no matter what happens with the 400 or so disputed mail-in ballots in District 6 that will not be counted until next week at the earliest. Her likely opponent is Dallas County Schools trustee Omar Narvaez, but there is a chance Alex Dickey, the candidate endorse by the Morning News in District 6, could sneak into the runoff if those outstanding mail-in ballots go his way. With one precinct and the mail-in votes yet to be counted late Saturday, Narvaez had a 48 vote lead on Dickey for the second spot in the runoff.

District 7 is headed for a rematch of the 2015 runoff between Tiffinni Young and Kevin Felder. This time, however, Young is the incumbent. Having only received a little more than 37 percent of the vote with 38 or 41 precincts counted, Young appears vulnerable. If the supporters of her opponents, all of whom have strongly criticized Young for supporting the mayor's plan to turn over Fair Park to a private foundation headed by Walt Humann, band together behind Felder, Young's first term on the council could be her last.

Similarly to his former colleague on the council Dwaine Caraway, Tennelle Atkins outspent his opponents in District 8 in an attempt to get back a council seat he'd been term limited out of. Unlike Caraway, Atkins will have to settle for a runoff against incumbent Erik Wilson after topping a five-person field with almost 42 percent of the vote. Wilson, a strong Rawlings ally who received thousands in financial support from For Our Community, got about 37 percent of the vote.