Eleven members of that council are set. Ten incumbents are coming back. Dwaine Caraway, who knocked off freshman Carolyn Arnold in District 4, might as well be an incumbent; he served four two-year terms at City Hall before being kicked out of his seat by term limits in 2015.

Dallas residents won't know until Saturday night whether the new council will have any new blood, thanks to the three runoff elections that will climax this weekend.

The three council races still on the board, plus a key Dallas ISD election, are referendums on some of the biggest challenges facing Dallas: low-income housing and slumlords, the Trinity River project, the future of Fair Park in southeast Dallas, and the continued implementations of the public-school reforms started by former Dallas ISD Superintendent Mike Miles.

Keeping those issues in mind, here's context from the online pages of the Observer about each election, starting with a deep dive into the odds for an upset in each City Council race (What to Watch for Ahead of Saturday's Dallas City Council Runoffs).
click to enlarge

• First Arrest Warrant Issued in West Dallas Voter Fraud Case
• Jose Barrientos, Person of Interest in West Dallas' Vote Fraud Investigation, Says He Isn't That Jose
• What We Know — And What We Don't — About the Ongoing Voter Fraud Investigation in West Dallas
• Alonzo Campaign Spokesman Says Narvaez Campaign Stole Votes, Expects Same In Runoff
The race in District 6 between incumbent Monica Alonzo and challenger Omar Narvaez has been marred throughout by allegations of voter fraud involving mail-in ballots. While the investigation is ongoing, Dallas County prosecutors issued the first warrant stemming from the case last Friday. Both campaigns deny that they're involved in any vote theft, blaming any impropriety on the other camp. In the first round of voting, at least, the contested mail-in ballots examined by the district attorney ended up being fairly evenly split between Alonzo and Narvaez.

• Hold On. Alonzo Gets No Credit for West Dallas HMK Deal. Narvaez Does.
Jim Schutze believes that Narvaez, not Alonzo, deserves credit for potentially saving hundreds of West Dallas renters from eviction by helping broker a deal with landlord Khraish Khraish, who agreed to sell dozens of houses to current renters. Before the deal, Khraish felt he would have to evict the tenants, thanks to new city code regulations that threatened him with hundreds of thousands of dollars in fines if he didn't perform expensive repairs on the properties.

• Despite Protests, Council OKs Cash for Concrete Plant to Move Near School
Part of the reason Alonzo is in a runoff in the first place is an unpopular vote she cast to give $2.5 million in city cash to a cement plant so it could move away from Trinity Groves and closer to Thomas Edison Middle School.

• Mayor Invokes Dead Cops to Get Fair Park Contract Signed by Thursday
• When Council Gets Done, Fair Park Could Belong to Putin for All We Know
• The Fight For Fair Park Advances to a Bigger Venue
The biggest issue in District 7's council runoff, by far, is the fight that sprung up last year over handing Fair Park over to a private foundation. Tiffinni Young, the incumbent, supports a turnover. Her opponent, Kevin Felder, does not.
• Dallas Just Approved a New Policy on Street-Level Pot Busts
During her first term on the council, Young's biggest accomplishment was helping resurrect and pass the city of Dallas' new cite-and-release policy for marijuana possession.
Dallas City Council District 8

• Tennell Atkins Says He Won't Cash In On Dallas Executive Airport, Because "I'm Rich Already"
• Dallas Council Member Atkins Found Guilty of Assault, Fined $100
Like Caraway, Tennell Atkins is a known quantity. He's already served eight years on the council, losing his seat in 2015 due to term limits. Much of the election in southwest Dallas' sprawling District 8 is going to come down to personality. Atkins, as the stories above show, has a lot of it.

• Dallas Police Chief David Brown Gets a Much-Needed Vote of Sorta Support
During his two years on the council, Erik Wilson has largely declined to stick his neck out, becoming an ally to Mayor Mike Rawlings and earning the support of Dallas' political establishment. In September 2015, Wilson participated in a meeting with then-City Manager A.C. Gonzalez about then-Dallas Police Chief David Brown's performance, a potential first step in dumping the chief. After the meeting, however, Wilson gave the chief his support, saying he never would've gone to the meeting if he'd known it was going to be specifically about Brown. 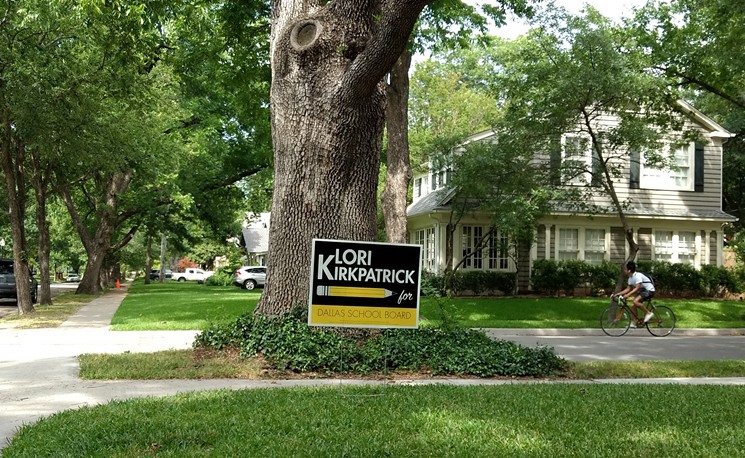 The race for District 2's spot on Dallas ISD's school board pits Dustin Marshall, the incumbent, against Lori Kirkpatrick. Marshall, who has the support of influential board member Miguel Solis and Dallas County Judge Clay Jenkins, supports Miles' reform efforts, including tougher evaluations and merit pay for teachers. Kirkpatrick, supported by Dallas City Council members Scott Griggs, Adam Medrano and Philip Kingston, as well as the teacher's unions, is against many of the ideas pushed by the school-reform movement and prefers, for example, moving away from the rigorous teacher evaluation system installed by Miles.