'Sir, This is a Wendy's': The Odd Story of a City Council Candidate with a Kitchen Knife 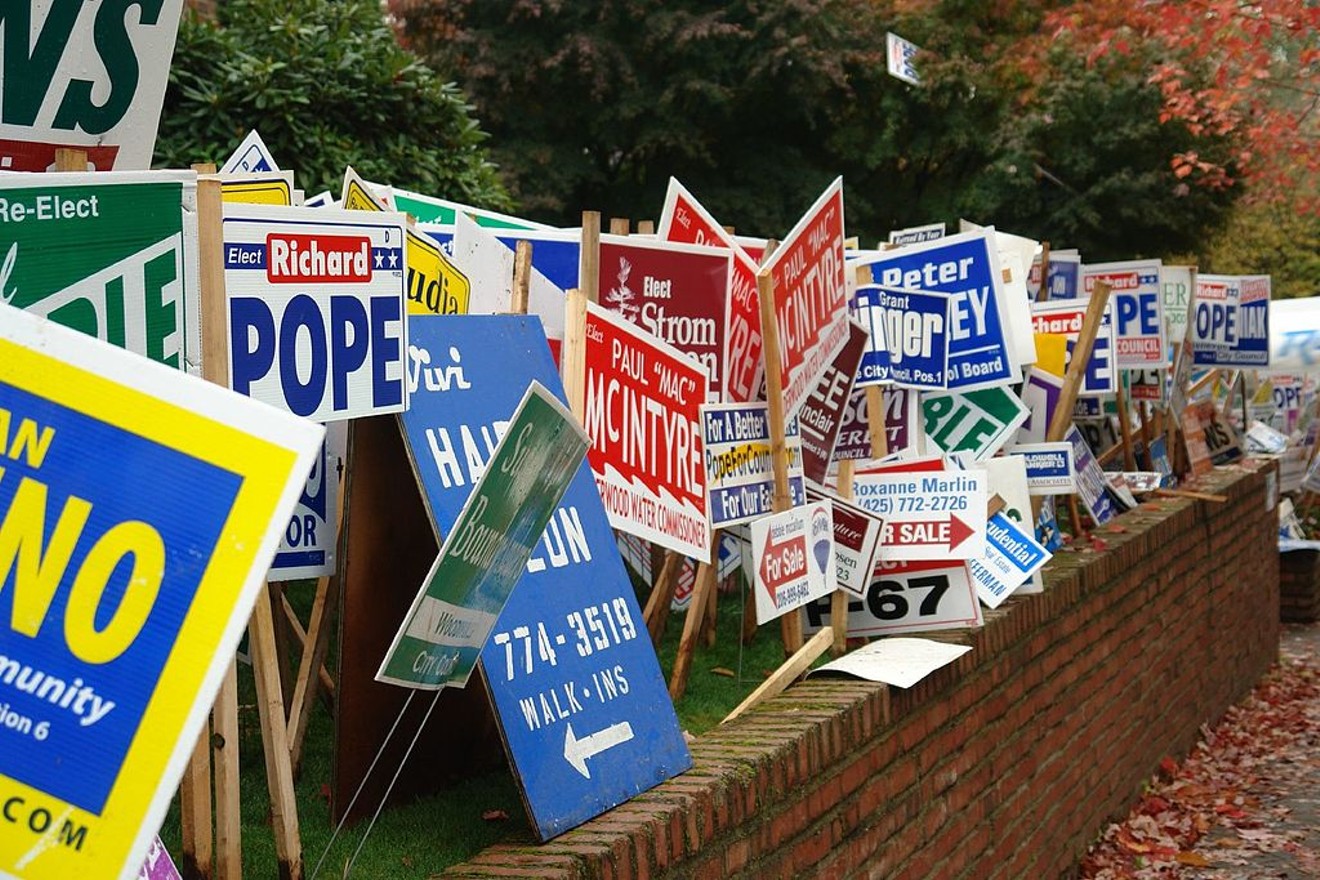 Campaign signs always seem to drum up the best election drama. Josh Larios from Seattle, US, CC BY-SA 2.0, via Wikimedia Commons
Dallas cops rolled up to a Wendy’s drive-thru on April 12 responding to a call alleging a District 10 City Council candidate was brandishing a kitchen knife and cutting down campaign signs.

McGough wrote on his Facebook page, “Please be aware: Sirrano Keith Baldeo is disturbed.” The council member's office said he didn't have any further comment beyond what he posted on Facebook.

He says his kids noticed one of his signs was removed on their way home from school. They went to take a closer look and found the knife on the ground where the sign had been that morning.

“To their surprise, the candidate running a failing campaign against me for District 10 was found still on-site,” McGough wrote. “After claiming Wendy's told him to cut down my sign and giving him a knife to do it.”

He continued, “I came to the site to protect my friend and our kids. This man loved the drama and would not stop until the police had to be called.” McGough was referring to his friend Christie Myers, who was driving his children home from school.

On his Facebook page, however, Baldeo said he wasn’t cutting down any of McGough’s signs. Instead, he insists he was cutting down and replacing his own signs. “Mr. Baldeo removed one of his large campaign signs and was on his way to retrieve two other small signs and a knife he used to cut the other sign down,” the post read.

He then says a woman approached him, taking pictures of him, the signs and the knife. “Suspicious of the woman,” Baldeo said he went inside the Wendy’s. A few minutes later, McGough pulled up to the scene. He approached Baldeo inside the restaurant, where they reportedly exchanged heated words.

“Mr. McGough then accused Mr. Baldeo of having an 8-inch knife around his son or son could see it, as though his son had never seen a kitchen knife, meant for cutting vegetables and meat,” the post on Baldeo’s page said. Then, several cops showed up. Everything was pretty tame from there.

After around a half-hour of talking to the parties involved, the police said no criminal mischief had occurred and asked everyone to leave.

“I came to the site to protect my friend and our kids." – Adam McGough, District 10 City Council member

Through this, though, McGough said he found out Baldeo had a warrant out for his arrest in New Jersey. Baldeo doesn’t deny that. To him, the warrant is frivolous retaliation over corruption he uncovered through his now-defunct conservative publication New Jersey Pulse.

He claims that several lawsuits were filed against him in an effort to shut down his publication. When the lawsuits failed, someone hired a private investigator to find dirt on him and his wife, Baldeo wrote.

A complaint filed against Baldeo alleged that he was “posting defamatory and untrue statements against the complainant and his company, family and friends on social media.” Baldeo said the complaint is referring to an opinion piece he wrote and the private investigator.

The warrant for Baldeo’s arrest was to get him to appear in court to answer the complaint. He points out on his Facebook page that defamation cases are civil, not criminal.

Last week on Facebook, McGough posted a photo of himself in a restaurant. “I invited my opponent to just sit and talk with me,” McGough wrote, referring to Baldeo. “I have no idea what is really going on in his life, but I want to help if at all possible. I waited an hour, but he did not show up. My invitation will remain open. I believe this will be used for good in some way.”

In response, Baldeo posted a photo of McGough with text that reads, “With the massive crime rate, the only reason to meet is for him to tell me he’s resigning.” Baldeo claims he is seeking damages from McGough over the way he characterized the situation online, which he insists has harmed his reputation.

McGough’s office said they are not aware of any such action by Baldeo. But if he chooses to pursue legal recourse, the council member’s office said, “McGough is confident he will prevail because truth is an absolute defense to a defamation suit.”
KEEP THE DALLAS OBSERVER FREE... Since we started the Dallas Observer, it has been defined as the free, independent voice of Dallas, and we'd like to keep it that way. With local media under siege, it's more important than ever for us to rally support behind funding our local journalism. You can help by participating in our "I Support" program, allowing us to keep offering readers access to our incisive coverage of local news, food and culture with no paywalls.
Make a one-time donation today for as little as $1.