New City Manager Goes All Rational On Us. Will We Take That?

Dallas City Manager T.C. Broadnax Stephen Young
I more or less pay the rent by telling you what’s wrong with City Hall. So I’m a little worried. Not sure how this is going to work out. It looks as if I may have to tell you what’s right with City Hall.

I ask only this: A couple of months from now, if you come a stoplight and I’m standing there on the corner with a cardboard sign, please remember that I did this for you.

It is beginning to look as if new City Manager T.C. Broadnax and his top staff are the real deal. By that, I mean nothing to do with personality. I have no idea what their personalities are. I haven’t met any of them.

But this is what’s up: Since May, Broadnax has been getting the City Council prepared for a whole new approach to economic development and housing policy — all of city policy, really — based on a system of rigorous analytics. I almost can’t even express how major that is.

In fact, as I said at the top, I have kind of earned my living around here telling you how badly Dallas has suffered in the past for the absence of rigor and analytics, especially in the handing out of so-called incentives in the form of property tax breaks.

It’s like City Hall is a bank and a guy walks in and asks for $20 million. City Hall sits around and says, “What do you think? Do we like his looks? Is he our brother-in-law? Well, sure, give him $20 million. It’s just tax money.”

The system Broadnax proposes to put into action here, called market value analysis, is not something he pulled out of his hat. MVA, developed over the last 30 years by an entity called The Reinvestment Fund in Philadelphia, has been tested in major urban markets all over the country. Using an associated tool called Policy Map, public policy deciders can drill down deep into real-life communities and see what has a good chance of working, where, when and how.

Just because speaking so positively about something is already giving me the shakes, please allow me to give you the counter-example, something that doesn’t work at all. Over a period of decades, City Hall has poured what must by now be hundreds of millions of tax dollars into a succession of retail projects in poor neighborhoods with high crime and high unemployment. Every single one of those adventures has been a dismal, embittering failure.

Pushed by council members in whose districts the projects took place, the rationale was that people in those areas deserved something nice. I am agnostic on the subject of what we human beings deserve. For all I know, it’s a kick in the pants. But I do know that stores do not stay in business on what people deserve. They stay in business on how much money people have in their pockets when they come in the door.

Let me give you an example from the other side of the tracks. Several years ago, a major Dallas company had already broken ground on its new headquarters in a high-dollar neighborhood when it went to City Hall and demanded a multimillion-dollar subsidy as an incentive for building a new headquarters.

A person close to the company called me and explained that another company — people from Chicago! — had just received a big subsidy from City Hall. Why should a bunch of Yankees get a subsidy, he asked me, and one of our best, oldest corporate citizens not also get one?


See. That’s where the money goes. When you don’t have a yardstick, everybody who comes in the door is 10 feet tall. They all have an argument why you should give them $20 million. Each. All of the arguments come down to the same thing: You gave the last guy $20 million.

It almost makes sense. If everybody else gets $20 million, I’d be a fool not to ask for my $20 million. In fact … well, maybe I’ll keep that trick up my sleeve for a couple of months from now until I can see how this positive thing goes.

The system Broadnax wants to use is based on a combination of broad assumptions and extremely granular, tight-focused data. One of the broad assumptions, proven elsewhere, is that you don’t plunk down a major public investment in an area where nothing else is working. Instead, you use what The Reinvestment Fund calls a “build-from-strength investment strategy.”

Let’s say you’re trying to ameliorate a food desert, one of the issues addressed by Policy Map and MVA. You don’t go stick a new produce mart right in the middle of the blighted zone, where there’s nothing else going on nearby to help it. You look for a major transit station, a big church, a healthy apartment complex or some combination of all these things, and you put your new produce store in that protective shadow, where it can get some traffic and a chance to put down roots.

Yes, you still need to get healthy, inexpensive food out into the heart of the food desert, but you have to build toward that, like laying down rocks in a stream to walk across. You’re not just carrying food out there; you are drawing hustle and bustle across the stream, bringing healthy economic activity to the other shore.

That takes thought, strategy, and tons and tons of data. The model Broadnax has been showing the council is not a gee-whiz entirely computer-driven system. It starts with data mapping, but the system also assumes even the best data mapping will have it a little wrong when you get out into the real world. MVA requires all kinds of double-checking, walking and talking, eyeballing things on the ground.

The data that the system will map will include basics like median home prices, for example, but it will also look at foreclosure filings as a percent of sales, vacant residential, percent condo, percent new, units per acre. It’s going to show crime, public health, changes in value over time and even the number of people at risk of displacement if values go up.

So now let’s run the same City Hall scenario but with this system in place, and let’s apply it to a real-life situation. We travel back in time to five years ago. Several major apartment developers were at City Hall asking for and getting mammoth incentives to build apartments in West Dallas. City Hall was using its customary method for analyzing requests: one for you, one for you, one for you and so on.

With the MVA system in place, City Hall could have looked at each deal and gauged with precision what size subsidy was appropriate to get the first ones going. It could have set a cutoff date, after which West Dallas was already going and blowing and nobody needed another subsidy.

Maybe more important, the MVA analysis would have supported the position of state Rep. Eric Johnson, who argues that tax subsidies can be more effective when they are more broadly shared and narrowly targeted. The city can leverage a major new development to improve conditions for people who already live there, rather than dropping the new development in like a gentrification nuke and just blowing up the community. 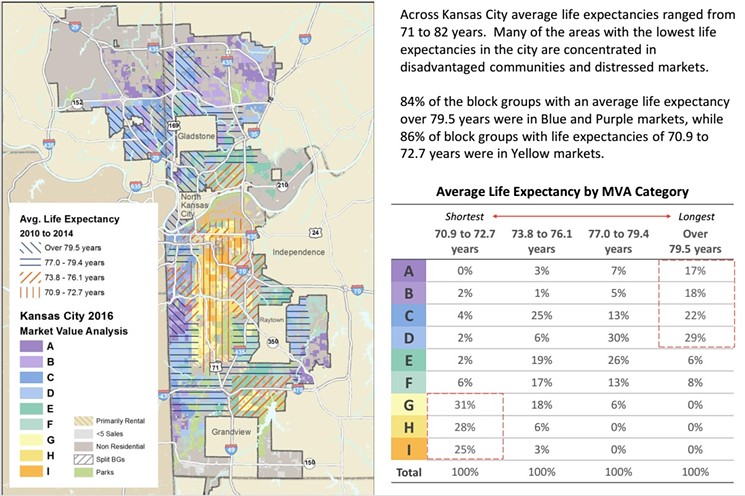 If you live in Kansas City, you can look at Policy Map to see when you're going to die.
Reinvestment Fund
That brings us to a certain deep-down showdown in town. The old power structure in Dallas tends to mistrust the word "community" because it sounds too much to them like communism. It views City Hall’s role as helping the business community (mostly meaning rich people) get richer.

A newer, younger element in the city sees community as the city’s ultimate asset, the draw, the thing that makes people and companies want to be here. In this newer view, community is the ultimate money machine. A safe, sound, smoothly operating community provides the shelter that business needs in order to take risks and be productive.

That’s a very big difference and a deep divide. There are people in the old leadership who are not going to like having City Hall tell them that their request for $20 million flunked the MVA analytics test. They will still want their $20 million, and they will not appreciate anybody getting in their MV-way.

Useful as these tools may be, it will be in no one’s interest for MVA to become a kind of authoritarian Wizard of Oz that can’t be disputed. Robert Mundinger, the mapping guru at the education advocacy group Commit!, is expertly doing a great deal of this kind of analysis. Mundinger’s work is at two websites, The Map and Commit! Data Dashboard. It will be important for City Hall to keep pumping out public data to Mundinger and other developers of analytical tools so that we will always have more than one perspective to consider.

More important than the specific tools, Broadnax and his top people are bringing us state-of-the-art professional community-building skills, something we have never had here before. Those new skills are based on an underlying philosophy that puts community first.

For that philosophy to take root and endure, the city manager will have to be backed up by a mayor and City Council who think the same way. On the other hand, if none of that works out, I’m still in business.