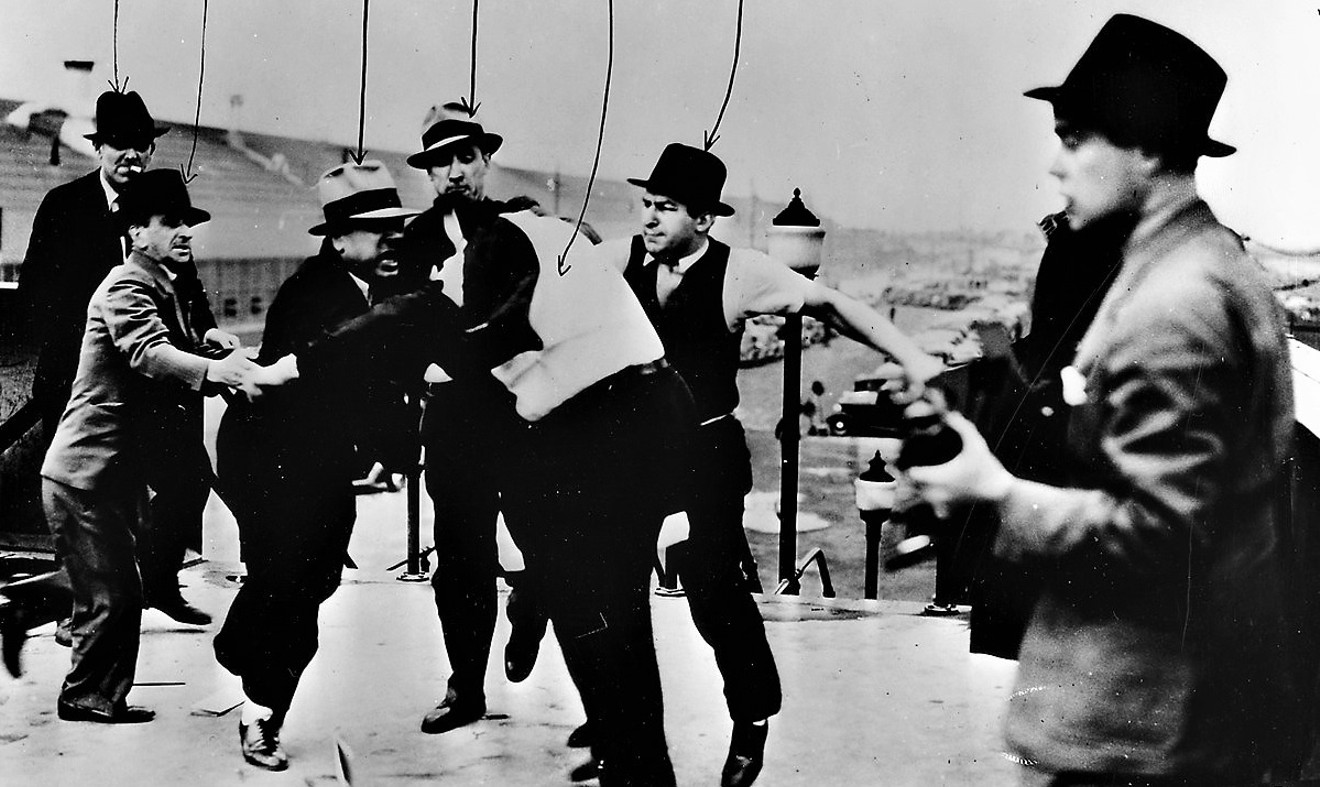 The Battle of the Rouge Overpass, May 26, 1937. The goons doing the assault and beating were thugs employed by Harry Bennett, Henry Ford's right-hand man. The people being beaten were organizers for the United Auto Workers. U.S. National Archives and Records Administration
In a dispute over an appointment to the city’s Civil Service Board, Dallas City Council member Lee Kleinman told The Dallas Morning News this week, “I hate organized labor.”

Wow. Where I came from, that’s almost hate speech. Or crazy speech. Like saying, “I hate CEOs.” C’mon. Which CEO?

You don’t automatically hate a guy just because he’s a CEO. Right? If you hate all of organized labor, you sure hate an awful lot of people. And you hate a very big piece of what made this country what it is today.

Kleinman told the News, “They've done more to damage this country than many other things.”

Really? Organized labor gave us two days off on the weekend and Social Security. Those were never going to happen without the unions. As important as soldiers and sailors were to us in World War II, our ability to defeat Germany also depended on our industrial might and on the support of American organized labor.

In the 1960s when this country was coming apart at the seams, organized labor provided the glue that held us together. The 1964 Civil Rights Act would never have been proposed, let alone enacted, had it not been for the leadership of George Meany of the AFL-CIO and Walter Reuther of the United Auto Workers.

Listen, Kleinman’s a smart guy, and I think some of the city’s police associations have treated him shabbily in the past. I also get that he’s a pro-business conservative. As such, his view of unions is not going to be my view. But, c’mon. To declare hatred of an entire integral element of American history?

In particular, Kleinman objected to the appointment to the Civil Service Board of a person with a background in union organizing, as if that background alone constituted a terrible conflict of interest. OK, by that standard, let’s make sure we don’t have any ringers sneaking onto that board who may have backgrounds in management. By Kleinman’s standard, a history of management experience should also be a disqualifying conflict of interest. No bankers. They might be anti-union. No hedge fund managers.

You know what? Maybe we should say no Republicans. And, yes, yes, I see where you’re going with that, and I agree. No Democrats, either. Only fair.

What about vegetarians? I have no idea which way vegetarians lean on the issue of organized labor. Do you? Well, if we can’t figure it out, we’ll have to knock them out of the running, too, just to be on the safe side.

More pointedly, Kleinman’s words also should serve as a strident wake-up for the city’s civil service employees. What he said — the way he said it — should be taken as a declaration of war. A person who believes that unionism itself is malignant on principle and who extends that sentiment to civil service obviously has an agenda.

Also, let’s not forget that civil service is a system that protects the taxpayer at least as much as it does the civil service employee. Don’t believe me? Tell you what. I will don my turban, look into my crystal ball at this moment and tell you what I see. Hmm. Rough times ahead for Dallas.

I predict that very soon — a matter of days, perhaps — Dallas is going to get some shockingly bad news about City Hall. The crystal ball tells me that the news we are about to receive will bring about a fundamental change in the way taxpayers will view city government in this city from here on out.

In advance of that moment, I would like to plant a thought. When the news breaks, we all need to think about the differences between those professional city employees who are members of the civil service ranks and therefore work within its protections from political influence and those city employees who are not in civil service and are not protected from political influence. Look for that distinction when you read the news that is about to break.

The city of Dallas is a $3 billion-a-year enterprise. The way it spends its money can and does deliver wealth to some people, not to other people. The dollar value of a City Council majority vote is only the most visible manifestation. All the way down the line, city employees far below the radar of public scrutiny are making decisions every hour of every day that can mean serious money for somebody and not for somebody else.

It’s wrong to assume that city employees operate out of a general sense of larceny in their hearts. If you have any significant personal experience of this city — dealing with the police, dealing with the people who manage street repair, dealing with Dallas city employees generally — then you know that this is not a city where you expect public employees to come at you with a hand out for a bribe. If you have lived in a part of the country or part of the world where that’s the case, then you recognize the difference here.

That’s why the coming news is going to be so bracing. But I urge you to keep looking closely until you spot the inflection point. The news ahead will involve those city employees who do not have civil service protection, and, I dare say, it will involve some people outside of City Hall who are probably strongly anti-union, not that unionism will be what it’s about.

The crystal ball isn’t giving me a lot of detail yet, so I don’t want to hand out exculpatory excuses for people too far in advance of the facts. But when this happens, I hope you will think about the aspect of civil service that serves to protect public employees from political influence and hectoring. Then I hope you will look closely at the people accused and their accomplices outside City Hall, their profiles and politics.

Part of the slander against unionism is that collective action of almost any kind is inherently corrupt. I hear that notion in Kleinman’s tone. If that principle were true, I always wonder why it wouldn’t extend to organized religion. Oops, forget I even said that one.

Here’s my point. Collective action is a human enterprise. Sure, it’s going to have feet of clay once in a while, but it’s also going to be capable of heroic good at other moments in history. Between those two extremes, it’s organized. Most of the time, depending on what you need to get done, organized is better than not. I also wonder when we will wake up as a people to the overwhelming evidence in our lives that the less organized we non-rich people become, the easier it is to grind us down.


“They've done more to damage this country than many other things.”— Lee Kleinman

I grew up in Detroit. As a young man, I worked in the car factories and was a proud member of the UAW.  You know what? I would be deeply ashamed to have the men and women who were the older members of the union back when I was in the shops come forward into this day and age and see what has been done to American working people and, for that matter, to the American middle class.

We let them take away our collective strength. They gave us cellphones and big-screen TVs. Look where that puts us now.

I don’t dislike council member Kleinman. In fact, I like him. He’s an honest man of good intentions. I just wish more people shared my sense of shock at hearing him slur organized labor that way. He says it almost with a sense of assumed support, as if everybody knows it’s wrong for a person with a background in labor organizing to serve on the city’s Civil Service Board.

I come from a blue-collar place, so I have a certain idea about what it is to work. My experience in that part of the world took place less in Detroit proper than in Pontiac, an outlying manufacturing center. Facebook keeps me up with a few people I knew back then. Most of them have been retired for years.

They’re all over the place, traveling the world. Most of their kids went to college. They’ve got good health care and weekend cabins up in the north woods. And they’re cool, well-read, sophisticated, up to speed.

Those people are my heroes. Where I grew up, you talked about people who worked versus people who had jobs. Working was working — laboring. People were proud of their labor. And every damned one of them was in organized labor. I don’t know how anybody can hate that.