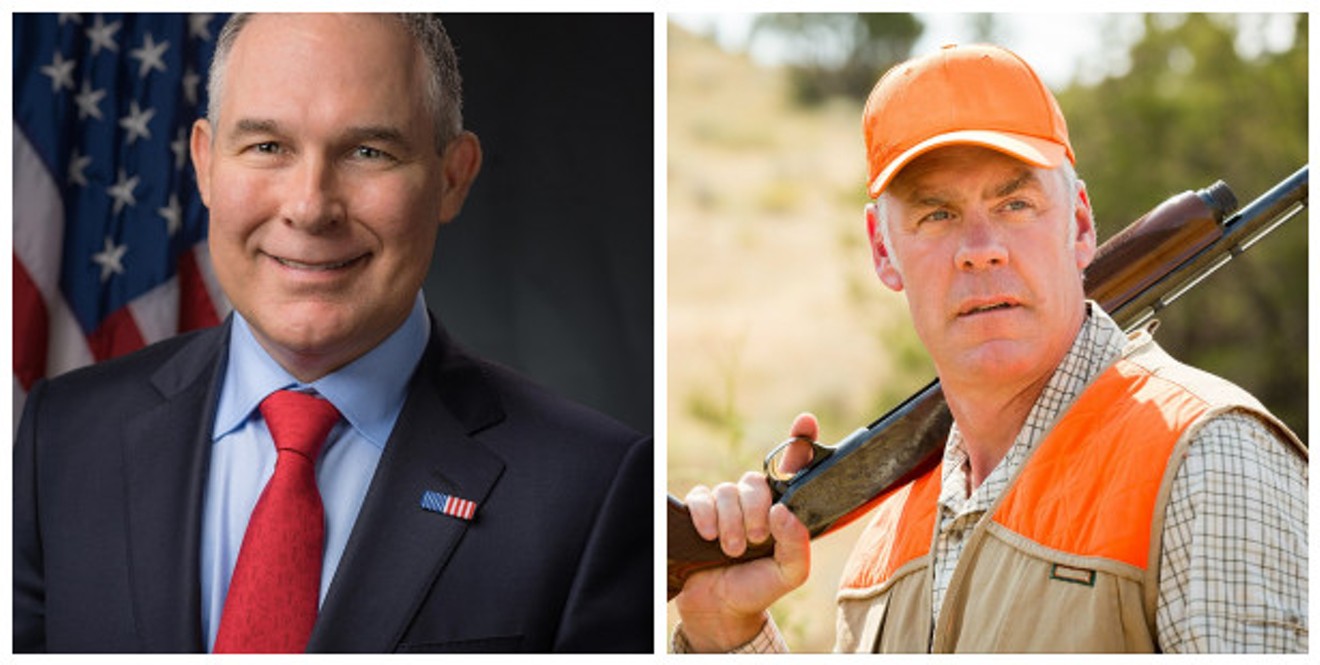 Scott Pruitt and Ryan Zinke, the best the Dallas GOP could do. Environmental Protection Agency and Department of the Interior
There's parody, self-parody and then whatever the hell the Dallas County Republican Party is doing with the lineup it's put together for its annual Reagan Day Dinner next week. The slate of speakers the local GOP has assembled is so absurd that, when first spotted in the wild by the Observer on Monday, we had to make sure that we weren't getting played. We weren't.

Having confirmed the veracity of the initial reports about who the local party would be welcoming to the downtown Omni a week from Thursday, let's go through the list, in the order it's being promoted by the Dallas GOP.

That place is going to lose at least 2 sets of silverware that night.


The Headliner — Disgraced former Environmental Protection Agency Chief Scott Pruitt: President Donald Trump handed Pruitt, the former attorney general of Oklahoma, the reins of the EPA in hopes that he would do his best to dismantle the agency's regulatory regime, which includes the Clean Air and Clean Water Acts. Pruitt did his best to do just that, killing dozens of regulations during his year-plus in charge.

Pruitt also did each of the following things on this non-exhaustive list before resigning in July 2018:

Pruitt was part of so many scandals that the media had trouble keeping up. Eventually, even Fox News grew weary of his general weasel-iness.
The B-Side — Disgraced former Secretary of the Interior Ryan Zinke: At the time of his resignation in December, Zinke was under investigation by both the Justice Department and his own Interior Department — for allegedly using taxpayer funds to pay for family travel and his role in a land development deal with Halliburton chairman David Lesar in Whitefish, Montana, Zinke's hometown.

Here's how Politico described the potential deal in Whitefish.

A group funded by David Lesar, the Halliburton chairman, is planning a large commercial development on a former industrial site near the center of the Zinkes’ hometown of Whitefish, a resort area that has grown increasingly popular with wealthy tourists. The development would include a hotel and retail shops. There also would be a microbrewery — a business first proposed in 2012 by Ryan Zinke and for which he lobbied town officials for half a decade.

The Whitefish city planner, David Taylor, said in an interview that the project’s developer suggested to him that the microbrewery would be set aside for Ryan and Lola Zinke [Zinke's wife] to own and operate, though the developer told POLITICO that no final decisions have been made.

Meanwhile, a foundation created by Ryan Zinke is providing crucial assistance. Lola Zinke pledged in writing to allow the Lesar-backed developer to build a parking lot for the project on land that was donated to the foundation to create a Veterans Peace Park for citizens of Whitefish. The 14-acre plot, which has not been significantly developed as a park, is still owned by the foundation. Lola Zinke is its president, a role her husband gave up when he became interior secretary.

The Zinkes stand to benefit from the project in another way: They own land on the other side of the development, and have long sparred with neighbors about their various plans for it. If the new hotel, retail stores and microbrewery go through, real estate agents say, the Zinke-owned land next door would stand to increase substantially in value.


Zinke also carved out land from areas designated as national monuments and sent Interior Department personnel to the U.S.-Mexico border, resulting in more than 4,000 arrests being made by the department in 2018. When Democratic U.S. Rep. Raúl Grijalva called for Zinke to resign for, Grijalva believed, misusing resources, Zinke mocked the representative's history of alcohol abuse.

Perhaps the most important thing to know about Zinke is that he calls himself a geologist, despite never having worked as one. Zinke majored in geology while he was a football player at the University of Oregon, but he went into the Navy, joining the Navy SEALs, after graduation. To date, despite referring to himself, by CNN's count, as a geologist more than 40 times in public settings, Zinke has never worked as any kind of a scientist.

The entertainment — Charlie Kirk, the world's worst millennial: Charlie Kirk, the guy who founded on-campus conservative group Turning Point USA because College Republicans aren't smarmy enough on their own, is a young, hip conservative who is far more likely to show up on your worst boomer relative's Facebook wall than one of your friends'.

If you think your life sucks, just imagine being a Democrat - your spokesperson rotates between a 28 year old socialist, a low IQ con artist, a Marxist who honeymooned in the Soviet Union, a criminal who lost the most winnable election of our lifetime, and a fake Native American


Kirk also loves to show off his knowledge of history:

Know your history, free your mind

The closest thing to a big-time local Republican the party could find — Texas Railroad Commissioner Ryan Sitton: Sitton sits on the Texas Railroad Commission. The commission, despite its name, regulates oil and gas production in the state. Before being elected, Sitton ran his own company, Pinnacle Advanced Reliability Technologies, which helped oil and gas firms make sure their equipment stayed in working order.

When he joined the Railroad Commission, Sitton put the company in a blind trust, which would be good, but he handed operations of the trust off to his brother-in-law, who is also his campaign treasurer. He's since repeatedly refused to recuse himself from matters involving clients of his company, like Exxon.

Despite the trust, Sitton told Forbes in a Dec. 2017 interview about President Trump's energy policy that he spends about 10 percent of his time at Pinnacle Advanced Reliability Technologies and 50 percent in Austin. He even gave a Forbes reporter a tour of the business. Sitton's spokesman told The Dallas Morning News in 2017 that he used an office on the company's complex occasionally.

“Since he stepped down as CEO and put the company in a blind trust there is no need, or practical way, for him to recuse himself,” Sitton's spokesman told the paper. “Numerous other successful business people that have been elected to public office have also taken similar steps.”

Given the pedigree of the speakers her organization's put together, it's no wonder Dallas County GOP chairwoman Missy Shorey is proud to be putting on the dinner.

"The voters of Dallas County are watching what is going on in Washington, D.C., and are deeply concerned. They are sickened by the rise of socialism Nancy Pelosi and other leftists are forcing on the American people. We are fortunate to hear first-hand about the realities of the “Deep State” from multiple leaders with Cabinet experience," she said in a press release. "We are excited to learn personal insights regarding important reforms being made in the United States such as reducing burdensome regulations, creating opportunity with 4 million new jobs since the election, achieving historically low unemployment for people of all backgrounds, promoting domestic energy production, and modernizing the military to face today’s security needs – this is the news that is rarely reported and is reshaping America and Dallas County for the better."

Tickets to the Dallas County Republican Party's 2019 Reagan Day Dinner on March 21 start at $175.
KEEP THE DALLAS OBSERVER FREE... Since we started the Dallas Observer, it has been defined as the free, independent voice of Dallas, and we'd like to keep it that way. With local media under siege, it's more important than ever for us to rally support behind funding our local journalism. You can help by participating in our "I Support" program, allowing us to keep offering readers access to our incisive coverage of local news, food and culture with no paywalls.
Make a one-time donation today for as little as $1.