What to Watch for as Election Night Unfolds in North Texas

Beto O'Rourke encourages voters in Dallas. Brian Maschino
At 7 p.m. Tuesday when polls close throughout the state of Texas — with one notable exception, but we'll get to that — only one thing will be left to do if you're the slightest bit politically inclined. No more doors to knock on, texts to send or votes to cast. All that will be left is to find the nearest couch or barstool, grab a cold beverage, turn on the cable news yakkers of your choice and hunker down for what looks like could be a long night.

Monday afternoon, voter data guru Derek Ryan tweeted that, according to his projections, 8.2 million ballots are going to be cast in Texas before polls close Tuesday. That's about 900,000 more votes than the election modeling website FiveThirtyEight has predicted in its ongoing forecast of the Texas Senate race, and enough to push turnout over the 50 percent threshold that Texas hasn't crossed in a midterm election since 1994, when George W. Bush defeated then-incumbent Gov. Ann Richards in her bid for re-election.

If Ryan's estimate is on target, polls that relied on Texas' 2014 midterm election to create their likely voter screen may not have been talking to this year's electorate — something Progress Texas' Ed Espinoza told the Observer might be the case late last month.

Texas added more than 1.8 million registered voters between November 2014 and the Oct. 9 registration deadline for the 2018 election, too, after having added just 1.2 million over the dozen years between 2002 and 2014. More than 40 percent of those new voters registered in Texas' five most populous counties — Harris, Dallas, Tarrant, Bexar and Travis — which makes Espinoza incredulous that those voters aren’t going to cast ballots.

“Do you really think that this mass of new registrants A: are not going to show up and B: are not going to vote Democratic? The overwhelming numbers of these registrants are coming from cities, and cities are blue,” Espinoza said. “I look at those things and I say, ‘OK, you can look at past behavior, but past behavior does not factor in the dramatic swing in voter activity from ‘14 to ‘16, it doesn’t factor in new registrations and it doesn’t factor in Beto O’Rourke raising $38 million in the third quarter [of 2018].’”
click to enlarge 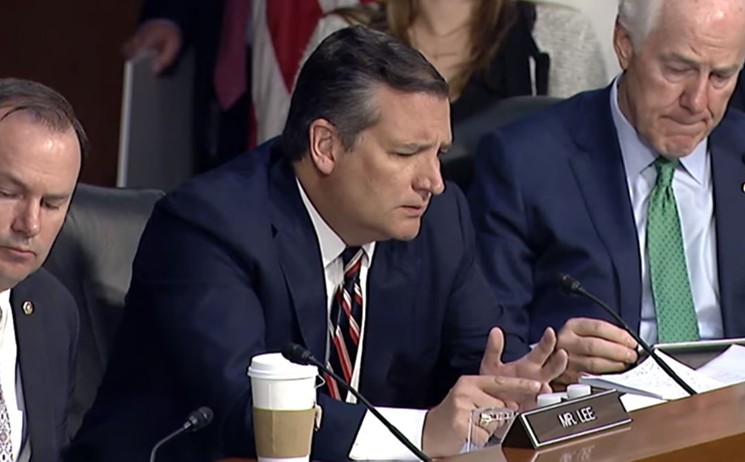 Ahead of the first round of votes being released at 7 p.m., no one really seems to know anything this time around. Keeping that in mind, here's a guide to following along tonight:

We won't find out everything we need to know at 7 p.m., but we'll come close.

When the polls close in all parts of the state that are on Central Standard Time at 7 tonight, a huge chunk of the total vote will be available for counting. Early votes and mail-in votes from across the state have already been counted and are just sitting there, waiting for release. When they are, the results of more than half of the ballots cast — in Dallas County and around the state — will be known.

"The nice thing about the early vote is, you can pretty much tell — I keep having to tell the television stations that it's so misleading when they say [after the early voting comes out], 'This is only with one of 250 precincts reporting.' I'm like, 'Yeah, but it is 75 percent of the vote,'" Rice University political science professor Mark Jones says. "I know you're treating it as one of 250, but proportionally it's 75 percent."

In that first big chunk of data from the Senate race, Jones says, O'Rourke must be within shouting distance of Ted Cruz to stand a chance.

"I think if O'Rourke's within 2 to 2 and a half points, we're going to have a long night. If it's 3 to 5, we're going to have to stay up, but I think we'll know how it's going to end. If it's above 5, then you can go to sleep at that moment," Jones says. "Once the gap gets above about 3 percent, it's really tough to close it with the Election Day vote, unless there's something weird going on."

Make sure to look at all the results in a given race, not just those from a single county.

One of the most interesting North Texas races, the congressional fight between incumbent Pete Sessions and civil rights attorney Colin Allred stretches across both Dallas and Collin Counties. If you were to look up results from Dallas County alone, chances are you'd be looking at a Democratic lead that might not be reflective of the entire race. Better to get your information from the Texas Secretary of State's Office, which does a great job of posting vote totals as they become available.

El Paso might as well be on another planet.

Not only is it closer to San Diego than it is to Houston, Texas' border city, the center of the political universe Tuesday thanks to the O'Rourke campaign, is literally in a different time zone. Polls close an hour later way out west than they do in the rest of the state, so we won't have a full picture of the early voting numbers until at least 8 p.m. Dallas time. If things are tight and O'Rourke is counting on a big margin out of his hometown to put him over the top, things will go late.

Collin County, the sixth-biggest county in Texas, went for President Donald Trump by 17 points in 2016. Throughout the 2018 campaign, however, O'Rourke has repeatedly drawn huge crowds in the county, as his and other campaigns have focused on turning out more liberal voters who might have recently moved to the suburbs from Dallas or another state. If O'Rourke or any of Texas' other statewide candidates are within single digits when the early vote is counted in what's heretofore been a blood-red county, a bad night could be on the way for Republicans.
KEEP THE DALLAS OBSERVER FREE... Since we started the Dallas Observer, it has been defined as the free, independent voice of Dallas, and we'd like to keep it that way. With local media under siege, it's more important than ever for us to rally support behind funding our local journalism. You can help by participating in our "I Support" program, allowing us to keep offering readers access to our incisive coverage of local news, food and culture with no paywalls.
Make a one-time donation today for as little as $1.