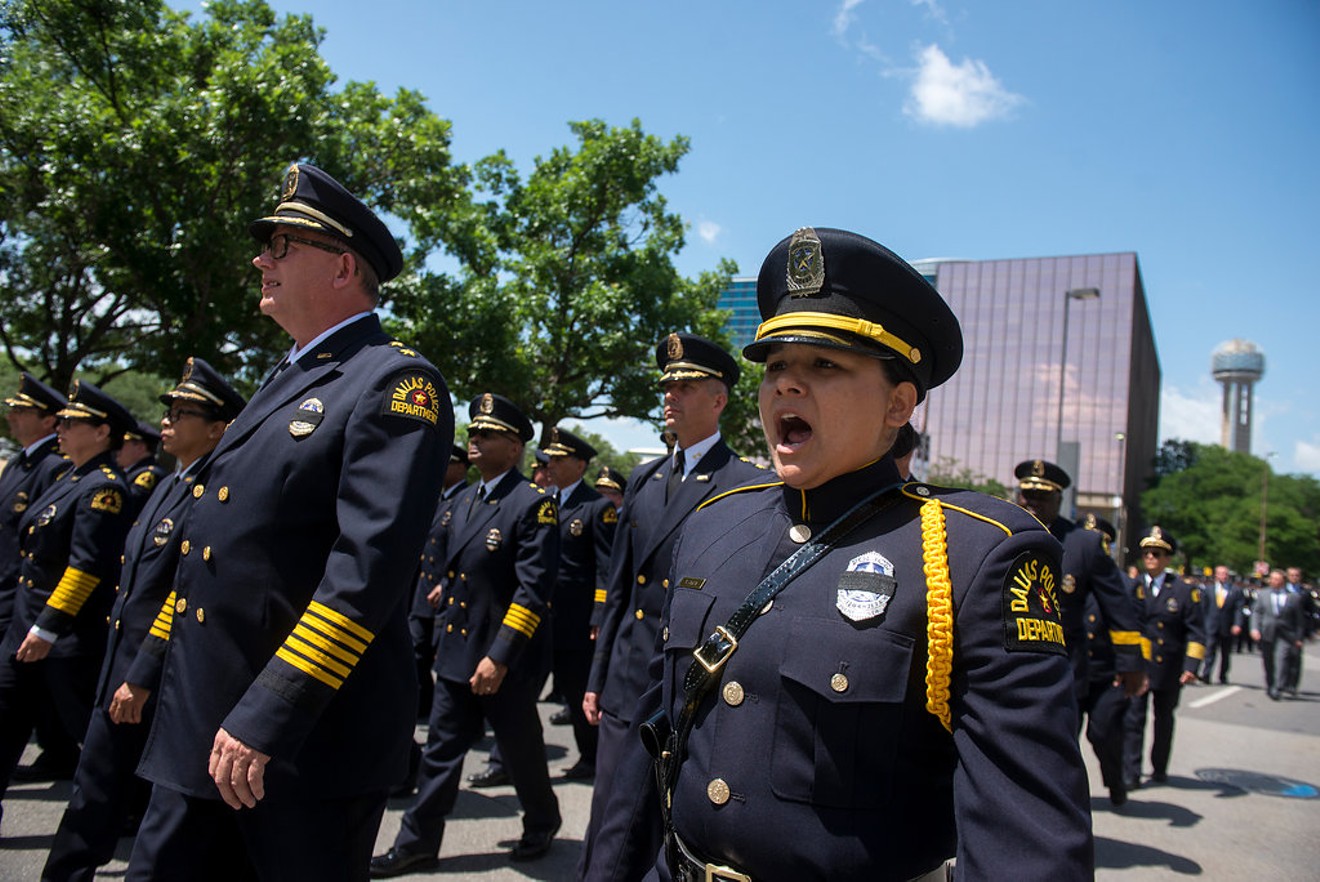 Dallas police officers at the 2017 Dallas police memorial. Brian Maschino
Getting home from his holiday shift Wednesday, Dallas police Officer Nick Novello decided, not for the first time, that he'd had enough. After another understaffed stint at the Central Patrol Division, Novello sat down and wrote a letter to Dallas Mayor Mike Rawlings, continuing a series of warnings he's issued to city officials over the last couple of years.

"My name is Nick Novello," the officer's letter begins. "I spoke as a working beat cop before the Dallas City Council in August 2017, where I stated, 'You no longer have a viable policing function in Dallas, Texas.' One year later, I am compelled to update your office, on what has gone from 'not viable' to 'impossible' and hence, potentially deadly, to those of us in patrol, and to those we protect and serve."

Novello, who's been consistently outspoken as he's neared the end of his three-decade career on things like criminal justice and drug reform, wants the mayor to do something about the staffing levels at the Dallas Police Department. Attrition and decreased hiring have put officers in an especially dangerous position, Novello says, which has come to a head several times over the past couple of weeks as severe officer shortages have driven up response times in and around downtown Dallas.

"What really set me off was Saturday, the 30th [of June], they knew there were demonstrations," Novello says. "So we went to detail, and there were a handful there — 12 or 13 — and you say, 'OK, 12 or 13.' Then they say, 'six or seven of you guys are going to the demonstration,' leaving five there. Now, out of five, myself and another officer went on a citywide assist, leaving three there. Three officers for all of central Dallas."

Although DPD knew for weeks that pro-immigration rights demonstrations were scheduled for June 30, Novello says, there weren't sufficient officers assigned to cover the calls that normally occur in the Central Patrol Division, which covers Dallas' urban core as far north as Mockingbird Lane.


"When you tell us, in so many words, we're worthless, you don't value our lives, you don't even bring people in. That's what they've been doing. Then they have the nerve to say crime has been reduced 20 percent? C'mon, man." — Nick Novello

"There's eight of us there — keep in mind, the normal staffing level is supposed to be between 29-32 [officers] — but there's eight of us," Novello says. "Then they come back and say, 'We've got demonstrations, we need five of you guys to report up north,' leaving three of us to answer calls. When you tell us, in so many words, we're worthless, you don't value our lives, you don't even bring people in. That's what they've been doing. Then they have the nerve to say crime has been reduced 20 percent? C'mon, man."

According to the Dallas Police Association's latest estimates, DPD has about 2,800 officers on its payroll, 800 fewer than called for in the city budget. DPD and its new chief, U. Renee Hall, haven't been able to hire officers quickly enough to make up the gap. That's something that won't change, Novello says, until the city offers higher salaries and more benefits for officers. If that doesn't happen, he says, the department will continue to struggle to meet its responsibilities.

"The analogy is, you send me out with five guys and you say, 'Nick, you've got six, and you better win this baseball game against nine,'" Novello says.

DPD did not respond to a request to comment on Novello's claims about staffing levels June 30 or July 4 in time to be included in this article. This post will be updated if the department chooses to do so.
KEEP THE DALLAS OBSERVER FREE... Since we started the Dallas Observer, it has been defined as the free, independent voice of Dallas, and we'd like to keep it that way. With local media under siege, it's more important than ever for us to rally support behind funding our local journalism. You can help by participating in our "I Support" program, allowing us to keep offering readers access to our incisive coverage of local news, food and culture with no paywalls.
Make a one-time donation today for as little as $1.