Dallas School Board Foe of Privatization Throws in With Koch Group. Go Figure.

Dallas school trustee Bernadette Nutall, a fierce foe of school reform and charter schools, sees no conflict in taking money indirectly from Charles Koch, the nation's best known proponent of charters and privatization. dallasisd.org
I don’t make 'em up, folks. I just try to keep up. Sometimes I need to just tell you about a thing — just put it out there on the table and say, “Go figure.”

Last week, President Donald Trump’s secretary of education, Betsy DeVos, came through town as the guest of Dallas Independent School District trustee Bernadette Nutall. Nutall, a fierce defender of the teachers unions, an opponent of school reform, and a sworn foe of charter schools and privatization, has thrown in with a group funded by ultraconservative billionaire Charles Koch, the nation’s best known most influential antagonist of teachers unions, a proponent of school reform, and a champion of charter schools and privatization.

You might ask how I can possibly keep my tongue in my head and not express a personal opinion about a thing like that. First: I’m not sure how, and before this day is out I may have to call 911. Second: I’m not entirely sure what my opinion is.


“And I want you to track the funding from certain votes that I made on the board when my funding stopped. Under the Mike Miles tenure I lost a lot of funders because of him.” – Bernadette Nutall

The Koch brothers, as is well-established scientific fact, are demons from hell. Everyone knows it. We don’t have to argue.

The president of the United States is king of the Scary Clowns That Come Out of the Woods. We don’t have to argue about that, either.

But, DeVos. I read all of this rabid anti-DeVos stuff, and I’m never sure what to believe. Her brother is Erik (Is he the one who dropped the c?) Prince, founder of Blackwater, a private security firm that changed its name after it became an international symbol for American mercenary savagery in Iraq. But that’s her brother.

The most ferocious antagonists of DeVos seem to me always to be associated with the teachers unions and the enemies of school reform, and I stopped taking them seriously a long time ago. Their criticism of her is not a deciding factor for me.

I know that the White House is supposed to have been alarmed at a bad interview DeVos supposedly did on 60 Minutes last month. I get that. But I always wonder why anybody goes on 60 Minutes anyway. Do people think 60 Minutes is going to give them a good interview?

I am unconvinced on DeVos. I just don’t know yet. But I do know this: Generally speaking, DeVos and the Koch brothers are pretty much 180 degrees opposed and at the far end of the possible theoretical spectrum from where Nutall has always presented herself politically.

I spoke to Nutall about it the day after the DeVos visit (don’t have a phone number for DeVos), and she gave me her version. She says she has no connection whatsoever with the Koch brothers, but she does get “a lot of funding” from a group called Urban Specialists.

Well, what kind of change are we talking about? Stand Together’s executive director is a guy named Evan Feinberg, who once ran unsuccessfully for Congress on a platform of abolishing the U.S. Departments of Education, Commerce, Energy, and Housing and Urban Development, along with 233 other federal programs. From my personal point of view, that’s awful, terrible, irresponsible and callous, except for HUD.

Feinberg has long been a Koch apparatchik — maybe from birth, because he looks like he’s about 21 in his photos — before coming to his current gig at Stand Together. (I am thinking of forming my own 501c3 called “No, Stand a Little Bit Apart.”) In an earlier guise, Feinberg appears to have been the impresario behind one of American history’s more hilariously terrible TV ads — hilarious not for what it said about its unintended target but for what it said about the repressed nerds who thought it up.

The ad, which came to be known on the internet as “Creepy Uncle Sam,” was created during the 2013-14 Obamacare enrollment period. Designed to scare young women out of enrolling, it features a maniacally grinning hard plastic Uncle Sam clown puppet wielding a gynecological forceps. Scary Uncle Sam Clown with Forceps (Gee, who does he remind me of?) appears between a young woman’s spread legs during a stirrups exam, leering fiendishly and manipulating his forceps.

I have to be honest. I see something like that, and I have the same reaction I had when I wandered into a Young Americans for Freedom rally in Ann Arbor 100 years ago and found all these young dudes in suits chanting something about no more promiscuity. My first thought was, “I’d feel a lot safer around you guys if you had more promiscuity.” My general rule since then has been not to talk to ultraconservative young men about women.

A good six years ago, I wrote about the nonprofit that Nutall has run for the last 18 years called Circle of Support. She started it when she was a DISD-employed teacher. It provides summer tutoring and meals for inner-city kids. The purpose is to remedy the loss of momentum that American children, especially poor kids, experience during our long summer vacations.

As I say, I have given her outfit at least a cursory look once or twice in the past, and I have never found anyone who said anything other than it’s a well-run, effective program. Nutall earns $83,485 in salary and benefits a year as the director, an amount that has not changed for at least the last three years, according to the group’s  federal tax declarations.

What has changed, Nutall told me, is the group’s income. The tax forms confirm that in four years, Circle of Support’s gross receipts, most of which come from donors, have decreased almost 30 percent, from $426,653 in 2012 to $302,111 in 2016, the most recent year for which records are available. Expenses for meals and teacher compensation have remained fairly flat. So that’s a squeeze.

“I want you to go back and look at my funding in 2012 and track it all the way to date. Some of those funders are not giving to me now," she says. “And I want you to track the funding from certain votes that I made on the board when my funding stopped. Under the Mike Miles tenure, I lost a lot of funders because of him.”

I did not have time at the end of the week to get to that level of detail. I did see that the gross amounts declined precipitously in the period she describes. I am not exactly sure why she wants me to prove that her votes as a school district trustee are directly tied to her income, but there you have it, and, anyway, I didn’t do it.

Nutall confirmed for me that she has now associated her group with the outfit mentioned above called Urban Specialists-Stand Together, run by Bishop Omar Jahwar. She said the association has been a fiscal boon for Circle of Support. I tried to reach Jahwar but was told he was traveling. I did not hear back. 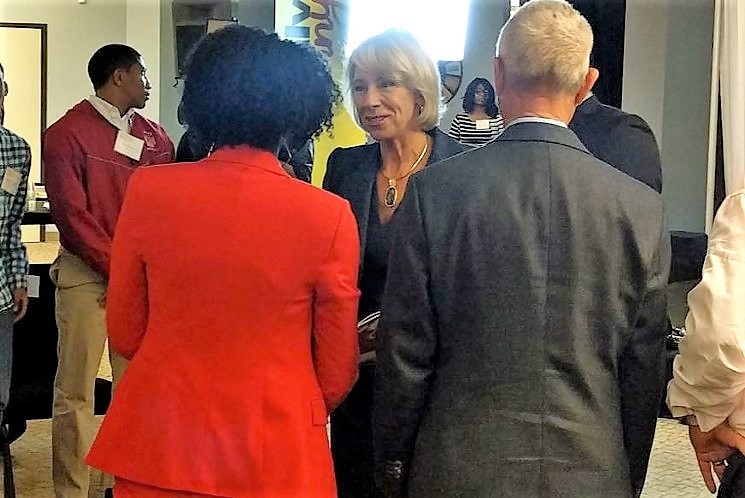 U.S. Education Secretary Betsy DeVos and somebody else who looks familiar from the back.
Stephen Young
Nutall’s view is not different from a lot of proprietors of hand-to-mouth nonprofits I have talked to over the years. She believes in her work, and she is delighted when pretty much anybody gives her money to keep it going.

“Y’all are trying to make a story out of a story about somebody doing good,” she says. “That’s what kills me. That’s politics I have nothing to do with. South Dallas is one of the worst places for poverty. We are trying to bring hope to our community. This is not a conspiracy theory that the Koch brothers are trying to take over.

“Don’t hurt the kids of this district behind someone because they gave money to a cause.”

I get all that. Good points. And not everybody is a student of irony the way we journalists tend to be. A lot of people just want to get stuff done. But to keep the record of irony complete, I do have to note a couple of ironic things.

First of all, the school that Nutall took DeVos to see, Billy Earl Dade, has made remarkable progress — some would say miraculous — precisely because of the reforms that Miles put in place there. Nutall fought Miles’ changes at Billy Earl Dade so vigorously that on one occasion, he had her frog-marched out of the building by security.


“Don’t hurt the kids of this district behind someone because they gave money to a cause.” – Bernadette Nutall

I didn’t like that. But the bottom line is that the success of Dade proves Miles right and Nutall wrong.

Nutall is now allied with people who are way out on the school reform fringe, way farther right than Miles ever was. Miles wants to save public education so the privatizers won’t be able to take it down.

But here is the even bigger irony for me personally. The stubborn opposition of Nutall and others to any and all efforts at meaningful reform of public education has made me so mad at times in the past that I have even wondered if taking it down might be the thing to do. So if anybody was ever going to turn up somehow distantly allied with the Koch brothers it should be …

Me. Like I said at the beginning, go figure.