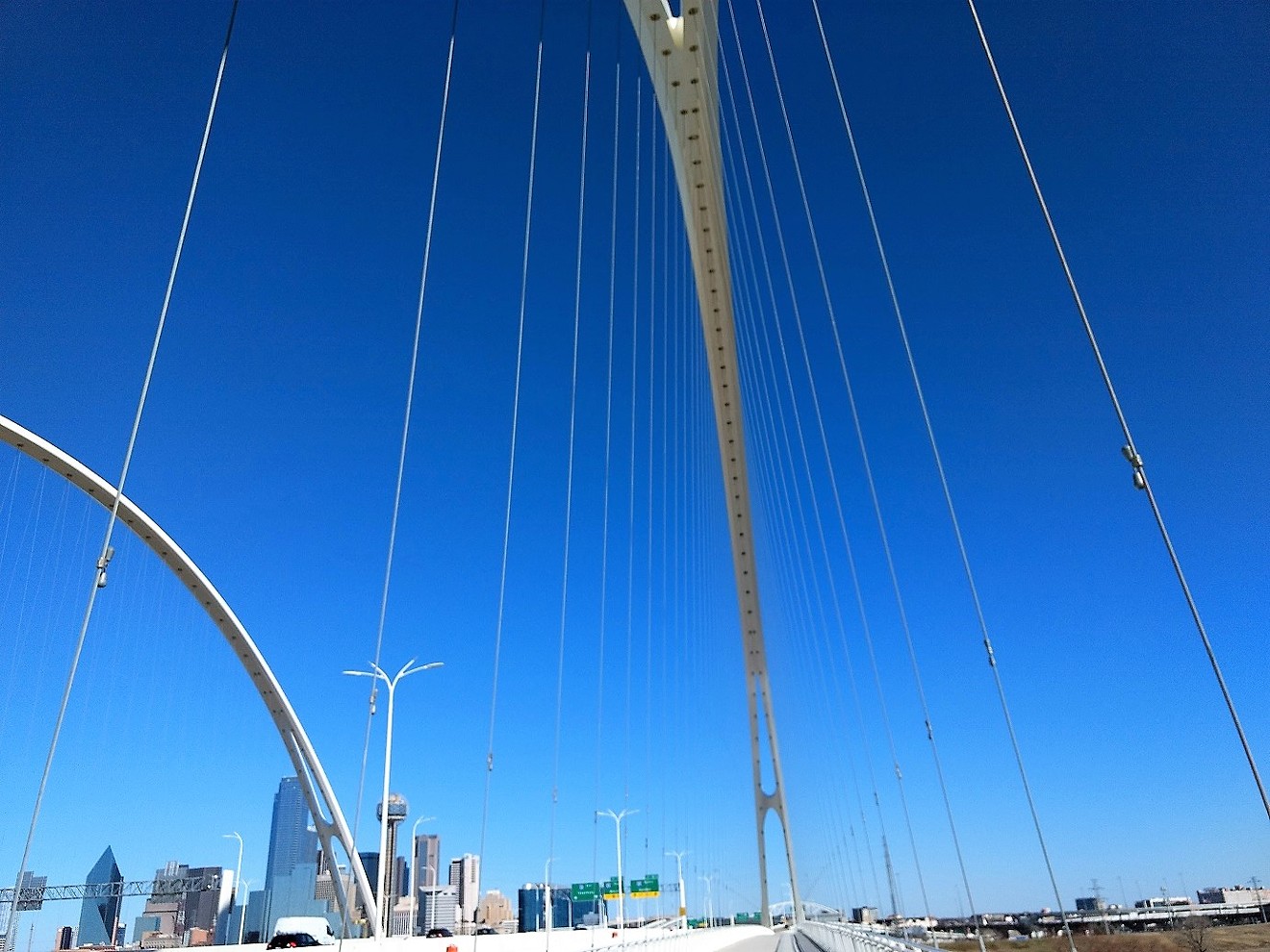 Cracked rods, cracked cable anchors. The Margaret McDermott Bridge is not doing well, and the part designed by Santiago Calatrava isn't even open yet. Jim Schutze
Two years ago in a gushing “interactive” story, The Dallas Morning News described the new Margaret McDermott Bridge across the Trinity River downtown as “heavy metal ballet,” saying the city’s second cable-stayed bridge, named for a wealthy Dallas socialite, was “as much art as engineering.”

Maybe more ballet than engineering. In early 2016, barely half a year after elaborate ceremonies celebrating the lifting into place of the final arch, the bridge began to crack up under the stress of high winds. Since then, it has been the focus of a bitter dispute, never disclosed to the City Council, among designers, project engineers, the construction company and members of the city manager’s staff who oversaw the project.


“We are not a city with a large navigable river that would warrant a suspension bridge. This is Texas, not Spain.” — Scott Griggs

On March 22, 2016, a rod used to adjust one of the cables holding up the bridge’s pedestrian deck cracked when the cable was twisted and vibrated by wind. The next month, on April 13, another rod cracked. On April 30, a third failed.

There are indications that anchors at the feet of the cables also have failed.

Testing to see if the cable rods would be strong enough in high winds, a common occurrence in this locale, was never done before the cables were installed. The cables have since been stiffened with a system of mechanical Band-Aids called dampers.

All of the parties point angry fingers. Nothing is resolved. The pedestrian and bicycle lane held up by the cables, scheduled to open last summer, remains closed behind trespassing signs that threaten arrest for violators.

The warning signs should be familiar to Dallas by now. The city was forced to post similar warnings six years ago at its so-called “whitewater feature,” fake rapids built in the river near downtown, so dangerous it had to be closed the day it opened. Signs are posted at the city’s Buckeye Trail, a paved nature trail falling into the river seven years after construction.

The failure of the Margaret McDermott Bridge is different in two ways. The first is money. The whitewater feature cost $4 million to build and will cost another $2 million to tear out as planned this year. The Margaret McDermott Bridge consists of two fake suspension arches clapped to the sides of a conventional concrete pier-and-beam expressway bridge to create the appearance of a suspension bridge. Those two arches, designed by Spanish architect Santiago Calatrava, raised the cost of the overall bridge by $115 million, $109.5 million of which was borne by the taxpayers. So, money.

Second is the global visibility and controversial name of the architect. It’s not possible to believe that the Margaret McDermott Bridge in Dallas will not find a prominent place in the international debate on Calatrava’s work. In this case, the recently released documents show that Calatrava consistently urged the city to get the proper testing done and even offered to lend the city money to cover the cost of the tests if the city couldn't manage on its own.

A trove of documents related to the bridge failure suggests a connecting thread. We are, it seems, a city that doesn’t know where it is.

“The overarching theme is trying to be what we’re not,” says Dallas City Council member Scott Griggs. Griggs, who uncovered the bridge failure although the city staff had not disclosed it to the council, blames the city’s serial embarrassments on a kind of insecure pretentiousness typical of its older leadership. He zeroes in on the near-obsession of the city’s wealthy elite with doing something fancy on our unprepossessing riverfront. “We’re not in the state of Colorado,” he says, “and building a whitewater rapids was never going to work.”

But the whitewater feature was the least of it. A decade ago, a coterie of the city’s wealthiest citizens were determined to bring about the installation of as many as half a dozen grand suspension bridges, all by Calatrava, all to be named for rich women, spanning the muddy, humble Trinity River near downtown. The cost of the original vision would have been somewhere north of building an 18-hole golf course on the moon, so the great dream had to be trimmed. 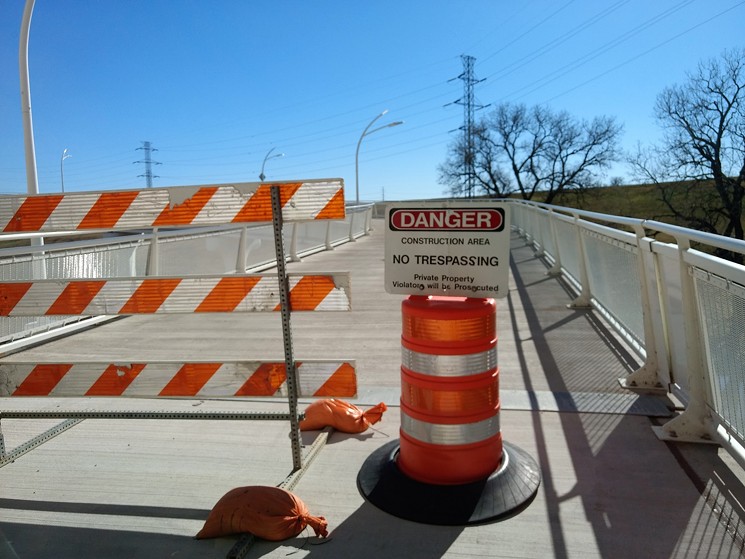 Signs warn that anyone entering the bridge will be prosecuted.
Jim Schutze
One Calatrava cable-stay bridge, knocked off from the architect’s earlier work elsewhere, was put up and named the Margaret Hunt Hill Bridge. For the second, twin Calatrava arches were appended as decoration to the sides of a plain-vanilla highway bridge built by the state. One of those arches, next to the eastbound lanes on the real bridge, was to be used to carry pedestrian and bicycle traffic, which had been forgotten in the original design.

That confection of fake arches and a state highway bridge carrying Interstate 30 across the river between Oak Cliff and downtown is the Margaret McDermott, now with the cracking cable rods and other issues. The vehicular lanes opened five years ago and have carried heavy loads of traffic without a hitch ever since. But the tacked-on $115 million decorative arches are causing the crisis now, and Griggs wonders why they were put there in the first place.

“We are not a city with a large navigable river that would warrant a suspension bridge,” he says. “This is Texas, not Spain.”

Documents uncovered by Griggs leave no doubt about one key aspect of the Margaret McDermott failure: Testing and inspection that would have predicted the failures were never done. In a Sept. 22, 2016, letter to the Texas Department of Transportation, a representative of Huitt-Zollars, the supervising engineering firm for the project, tells TxDOT that the city of Dallas and the construction contractor had agreed in contract negotiations to skip a key stress test of the cables as a form of “value-engineering options (VE).” VE means saving money.


“This abnormally small diameter rod leads to larger stresses in the rod under all load conditions."— Huitt-Zollars

VE was the city’s key strategy for dealing with projected jumps in cost beginning in 2012 and totaling $12 million for the make-believe arches by 2013. Huitt-Zollars told the state in the September 2016 letter that the city had agreed that tests could be skipped by Pegasus Link Constructors, an ad hoc firm created for the state’s overall “horseshoe” project to rebuild a complicated freeway hub near the city center. That agreement was struck, the letter says, “with the understanding that previous test data results applicable to the MMD (Margaret McDermott) Bridge were available and would be provided.”

Ah, but no such luck. After the decorative arches were up and cracking, Huitt-Zollars said, “Since the VE proposal was accepted in 2012, no applicable test data has been provided by the contractor.”

Other correspondence explains why the test data from other bridges never was produced. In some more value engineering, the size of the adjustment rods was reduced. Apparently, there was no test data for the smaller rods because the smaller size had not been used in previous projects.

Griggs received documents about the controversy from the city attorney, all public record but never released, after repeatedly asking city staff why the Calatrava pedestrian and bicycle portion of the bridge was still not open months after its scheduled debut.

The documents suggest it may be unfair to blame the construction contractor. Six days after Huitt-Zollars wrote to the state basically blaming the contractor, TxDOT fired back a letter saying, “TxDOT has reviewed the plans and the original bid … and does not agree … .”

The TxDOT letter pointedly pins the blame for dropping the required stress tests on the city. It's a little confusing, however, that TxDOT, by its own account, was the go-between in getting the contractor to drop the tests.

“As stated in your letter,” TxDOT tells Huitt-Zollars, “at the city’s request, TxDOT requested potential value engineering and cost savings opportunities from the contractor as a result of the bids for the bridge coming in over the available funding.

“One of the value engineering cost savings opportunities suggested was the elimination of the cable fatigue testing and the utilization of previous test data for the proposed cable hanger system.

That particular cost savings was a small slice of the overall corner-cutting that the city and TxDOT pushed Pegasus Link Constructors into accepting in order to get the contract. In a February 18, 2016, briefing to the City Council, the city manager’s staff bragged that “$3.1 million in value engineering and scope credits have been implemented.”

It’s clear from the documents that some of the other cost savings came from the materials used. At the end of last year, with nothing resolved and the finger-pointing and acrimony notably more intense, Huitt-Zollars wrote to Sarah Standifer, head of the city’s Trinity Watershed Management department, with more bad news about effects of the cost-cutting. The engineering firm, which must sign off on the project before the pedestrian lanes can be opened, said it had learned about the smaller adjustment rods:

“This abnormally small diameter rod leads to larger stresses in the rod under all load conditions including cyclical stresses which can have the propensity to induce fatigue damage.” (In this case, cyclical stress is bending and vibration caused by high wind.)

The Observer contacted Dallas City Manager T.C. Broadnax, who said he would have comment on the issue by Monday morning, but the paper had not heard from him by deadline for this story Monday afternoon.

Additional tests of the adjustment rods finally were completed last year in Germany. They failed.