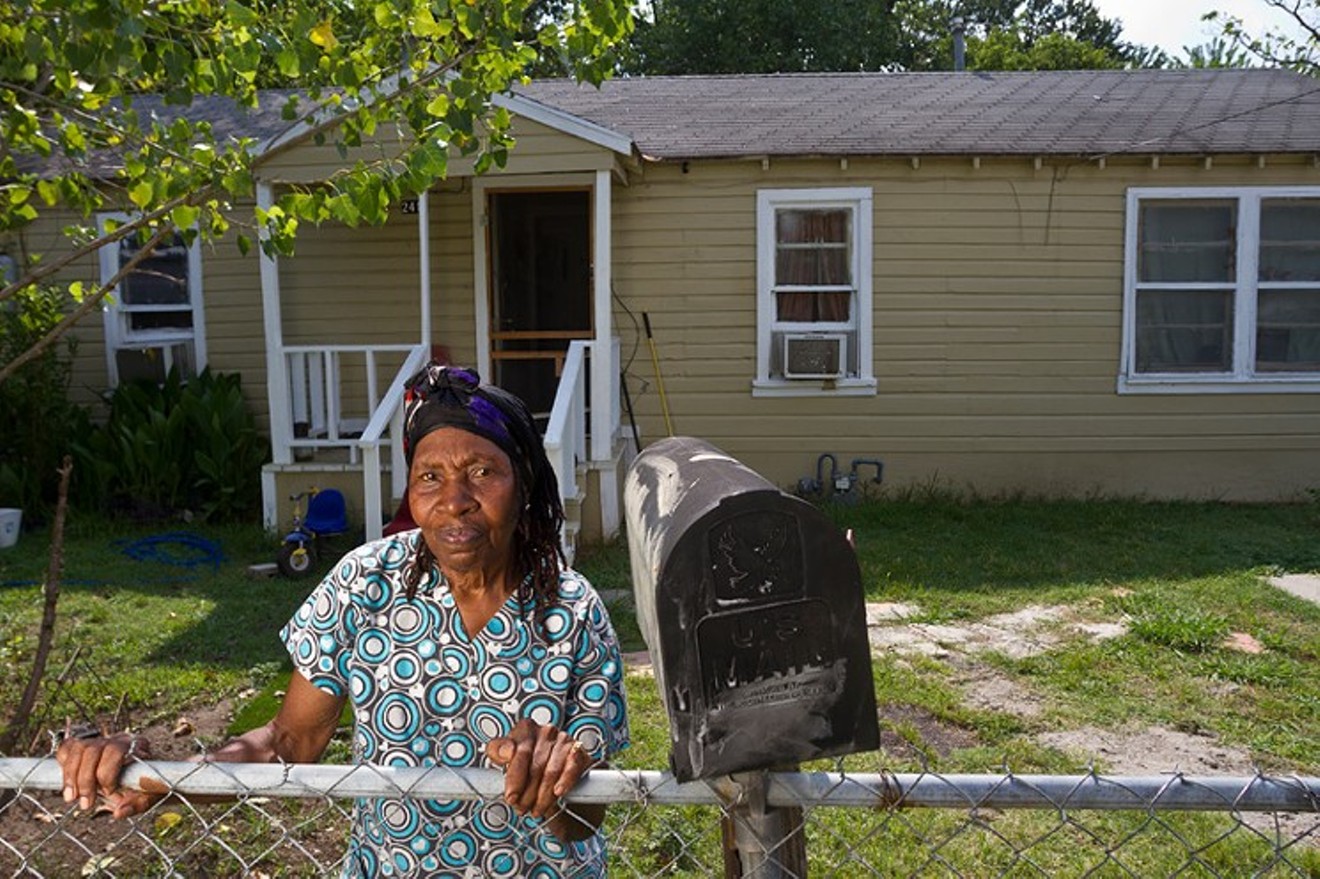 The housing policy suggested by Opportunity Dallas would use an array of tools to keep residents in gentrifying areas in their houses by reinforcing their neighborhoods. Mark Graham
One thing we should all be able to agree on about now. The Trump debate — against, for — really does not get anybody one inch off the dime. Most of the time, I don’t even think any of us can really remember what we started out thinking we were talking about. In fact, wouldn’t it be nice once in a while to be able to debate an actual idea, just for the fresh air?

So here they come, the ideas. I am beginning to hear serious new sets of ideas coming from real people out there in the active political world — especially interesting because the ideas have the capacity, at least theoretically, to reach all the way from the very local to the national and maybe even international levels. I want to talk about some of them here in the weeks ahead.

Are these liberal ideas or conservative ideas? Probably more liberal than conservative, surprise-surprise, but not in the old-school, New Deal, Great Society, doctrinaire liberal sense. These all come from people who hadn’t been born yet when Lyndon Baines Johnson first took office as president.

These ideas illuminate and presage the huge shift in politics about to take place in this country on the generational divide. I believe, perhaps too wishfully, that even many conservatives can find rays of hope in them.

The first specimen is in the work product of a task force called Opportunity Dallas, a nonprofit that thinks about pragmatic ways Dallas can attack poverty and social dysfunction, especially by focusing on housing policy. Its mission is born of a big body of recent research showing that large concentrated areas of poverty and racial segregation in cities are bad self-fulfilling prophecies.

“The report is, in my opinion, revolutionary, because it has institutionalized, at least for us, what we think the future of housing should look like in our city." – Miguel Solis

Maybe we didn’t need Harvard to tell us, but the fact is that kids don’t stand much of a chance if they are born into severely disadvantaged high-crime areas with lousy schools. Harvard does tell us that, as does just about everybody else who has taken a serious look at 21st century urban American poverty.

The pragmatic way to crack those hard nuts of poverty is to provide ways for ambitious parents to get their kids out of there — making sure, in other words, that good parents in bad neighborhoods are not simply trapped or imprisoned by some set of factors utterly beyond their control. That gets us to the housing issue.

Since August, a task force of major community stakeholders has been convening every two weeks under the aegis of Opportunity Dallas. The 32-member task force, which includes people from the mainstream housing industry, is ready to publish a set of recommendations in the form of a proposed unified city housing policy.

A few members of the task force are taking exception to specific recommendations, and I will get back to that. But the more interesting things are what they all seem to agree upon, especially given that the members come from very diverse and disparate parts of the community.

Yet here comes this very smart, global, hands-on practical set of recommendations for bringing about both of those goals. Over coffee at Lakewood Starbucks yesterday, Dallas school board trustee and task force member Miguel Solis said, “The report is, in my opinion, revolutionary, because it has institutionalized, at least for us, what we think the future of housing should look like in our city, and I honestly don’t think I have ever seen anything like that happen before.”

The task force recommendations say at the top, “We cannot forget that Dallas has a unique history that has shaped where we are today.” Also at Starbucks yesterday, Mike Koprowski, executive director of Opportunity Dallas, explained:

“There is a reconciliation that has to happen, and I think that there is an acknowledgement for government to make that, ‘You know what, we played a role in creating this. This did not happen by accident.’ That’s the first step to rebuilding trust.”

From there, the ideas get much more nuts and bolts. For example, the task force recommends that the city use data mapping strategies, probably based on or closely related to the work already begun by City Manager T.C. Broadnax, to watch for areas beginning to gentrify, sort of like an early warning system.

When the early warning system shows an area about to light up, the task force says, the city should look closer and use predictive tools to estimate how many residents are in danger of getting bounced out of their homes by gentrification. If a lot of people are at risk of getting shoved off the turf, the city can use an array of tools suggested by the task force — targeted land banking, homebuyer assistance, home repair assistance, tax increment financing — to protect against disruption and to stabilize the area.

Again, sorry, not to saw on an old saw or anything, but in the old days, the people who ran City Hall would have said, “Protect 'em? Are you nuts? Those are the people we want to run off!” But, you know, that was back in 2014.

The task force urges the city to begin building up a serious affordable housing fund to help pay to create a larger supply of affordable housing. And it urges the city to adopt something called inclusionary zoning that we have talked about a lot here in the past. That’s where a developer comes to the city and says, “Hey, give me a special deal to let me build 100 more apartments than the law allows,” and the city says, “Maybe, if you agree to make 20 of them low-income.”

One of the specific recommendations for which there has been pushback is a thing called source-of-income discrimination. The task force wants the city to adopt an ordinance making it illegal to bar someone from renting just because that person plans to pay part of his rent with a government voucher, provided the person qualifies to rent in every other respect.

The Neighborhood Change Index recommended by the Opportunity Dallas task force would serve as an early warning system when events occur that threaten existing neighborhoods.
Jim Schutze
Task force member Kathy Carlton, director of public affairs for the Apartment Association of Greater Dallas, does not support that one plank of the task force report but does support the rest of it. I’m a big fan personally of a ban on discrimination against voucher-holders, but, then again, I’m not in the apartment business, am I? I know Carlton to be a smart, fair-minded person, and I look forward at some point to hearing her objections in detail. That’s not at all what I’m thinking about now, however.

I’m thinking, “What? Kathy Carlton was on this thing? You’re kidding me!”


“There is a reconciliation that has to happen, and I think that there is an acknowledgement for government to make that, ‘You know what, we played a role in creating this.'" – Mike Koprowski

Solis and Koprowski explained to me that everyone on the task force was there as a private person and none of them represented or spoke officially for his or her organization. I nodded as if I understood, but I was thinking, “Yeah, right, well in the old days, the several members of your group who work for industry groups wouldn’t have admitted they even knew you, let alone joined your outfit.”

And there’s the difference. Within the task force and over the range of specific recommendations, there’s still lots of room for debate, but the bigger, more significant thing is that they’re all sitting at the same table debating it. And that debate seems to be built on a foundation of certain broad and fundamental principles:

All people have dignity. People who are not rich play just as important a part in the community as people who are rich. The poorest kid in town could turn out to be the best mayor ever. So could the richest kid in town. Poor people and rich people can walk past each other on the same sidewalks and not just fall down and die. Nobody gets respect unless everybody gets respect.

That set of principles, when shared, enables the formation of basic social trust, and, with social trust in hand, people can do anything, solve anything, achieve anything. This isn’t the only example. I am hearing other new ideas very much in this same vein, from this same sort of center, some of which aren’t quite ready for prime time yet, but they are on the way, coming soon, I think.

Yes, they seem to occur on a certain tectonic transition line between the generations. That conversation probably doesn’t get going in full voice until we see more elected leaders in place who are of the Koprowski/Solis demographic (young), rather than the Schutze demographic (you know damn well).

Is it hyperbolic to propose that ideas we might see churning here on the local stage could be part of a much larger shift in American politics? Well, how big is the generation? They seem to be pretty evenly distributed around the nation, and the differences in fundamental assumptions seem to be consistent.

The national political scene is so trapped in spasm now between no-Trump and yo-Trump. That sheer inertia alone means something has to give at some point. Maybe this is it, beginning.