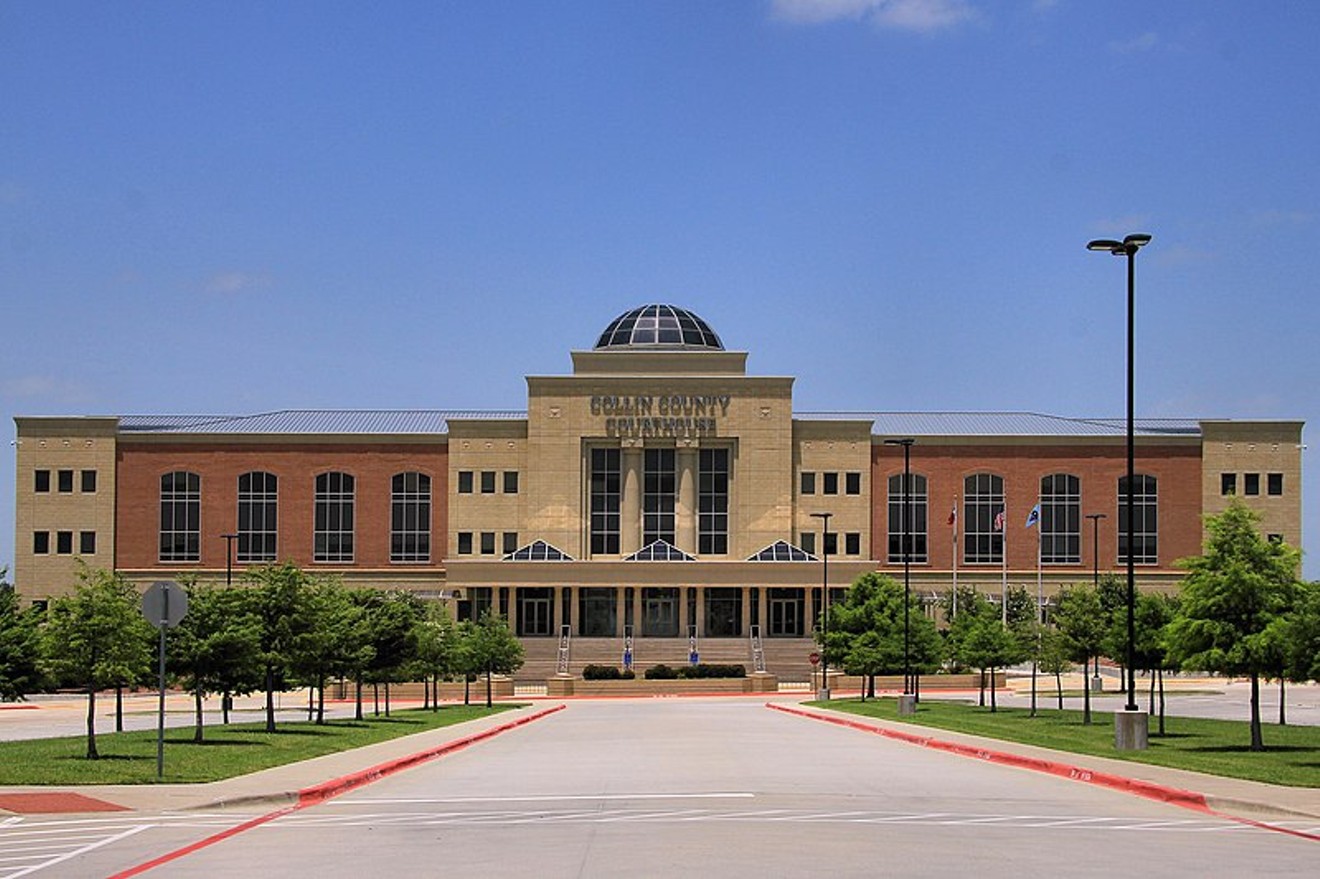 On Monday, the Collin County Commissioners Court held a longtime critic in contempt and had him removed from the building. Larry D. Moore, CC BY-SA 3.0, via Wikimedia Commons
Joshua Murray is a familiar face at the Collin County Commissioners Court. Since 2015, he’s spoken out at meetings, often railing against the lack of police accountability in the county. On his Facebook page, he shares clips of his comments and blasts local elected officials.

On Monday, however, these longstanding tensions boiled over when the commissioners voted to hold Murray in contempt and had court bailiffs escort him from the building. Not long after that, a warrant was issued for his arrest on a charge of disrupting a public meeting.

The commissioners say the whole affair was about maintaining order, but critics insist they merely wanted to intimidate Murray to score political points.

Dozens had shown up to the meeting, many of them delivering their own statements. Some praised Collin County Judge Chris Hill for lashing out at recent protests. Hill had demanded “law and order” in the county.

But the majority sat in silent protest, a way to speak out against the way authorities have handled Marvin Scott III’s death in Collin County Jail earlier this year. Carted off after being picked up on marijuana possession charges at an Allen shopping outlet, Scott died in custody. His death has been ruled a homicide and seven officers were canned, but no one has been charged.

Meanwhile, the video of his death was shown to his family, but authorities have rejected requests to release the footage to the public.

During that meeting, Murray was the final speaker. Rather than join the silent protest, he decided to criticize the court for the way it’s handled the county jail.

“A primary responsibility of this court … is to provide a safe and suitable jail,” Murray said. “I think it’s irresponsible for this court that it has been 70-plus days since the instance in which we had policies and procedures that were violated that resulted in seven officers being terminated. And this court has not taken it upon itself on public record to meet with the sheriff or a senior person within the jail … and ensure that they have the resources they need.”

When Murray’s three minutes came to an end, Judge Hill sternly dismissed him from the podium. A previous speaker had been allowed to go over time, but Murray was the only person specifically ordered to leave the podium. He decided to let the judge know what he thought about it.

“I said, ‘You don’t have to dismiss me.’ I didn't say it in the microphone or anything,” Murray told the Observer. “It's just what I said as I walked off.”

“I said, ‘You don’t have to dismiss me.’ I didn't say it in the microphone or anything. It's just what I said as I walked off.” - Joshua Murray

Within a minute, the commissioners had voted him in contempt of the court and a pair of bailiffs had hauled him out.

Commissioner Darrell Hale, who seconded Judge Hill’s motion to hold Murray in contempt, defended their decision. In an email, he insisted that Murray was out of order for speaking past his allotted time and not returning directly to his seat.

Hale explained that though they found Murray in contempt, but they did not issue any penalties, and that the Constable filed the charges and issued the arrest warrant at their discretion. The Collin County constable declined to comment on the matter.

“I don’t know why he didn’t return to his seat nor why he had issues with the word ‘dismissed,’” Commissioner Hale said. He claimed that at least 60 other witnesses could corroborate his point of view.

Elizabeth Michel, who’s joined protests seeking justice for Marvin Scott III, sees it differently. “They wanted to put on a show for their supporters who were there that day,” Michel said. “They did it to Josh because he is up there every week telling them they need to do a better job.”

The way Michel remembers it, Murray was already at his row of seats when the motion to hold him in contempt was made. Photos of where Murray was sitting appear to back that version of events. “You can even see on the video that his body was already turned in,” Michel added.

A video of the incident shows Murray somewhat stalling with his feet, but otherwise remaining calm and compliant, pleading with the officers. In any case, the meeting was adjourned after Murray was whisked out of the building.

Somewhat ironically, Judge Hill himself had taken a moment to praise the behavior of public speakers earlier in the meeting.

“I applaud everybody for being here, and I’m truly grateful that we have this opportunity,” he said. “I’m very impressed. Because, quite frankly, this is what democracy is about. This is a peaceful protest. This is an orderly meeting. And I applaud everyone who is a part of it.”
KEEP THE DALLAS OBSERVER FREE... Since we started the Dallas Observer, it has been defined as the free, independent voice of Dallas, and we'd like to keep it that way. With local media under siege, it's more important than ever for us to rally support behind funding our local journalism. You can help by participating in our "I Support" program, allowing us to keep offering readers access to our incisive coverage of local news, food and culture with no paywalls.
Make a one-time donation today for as little as $1.