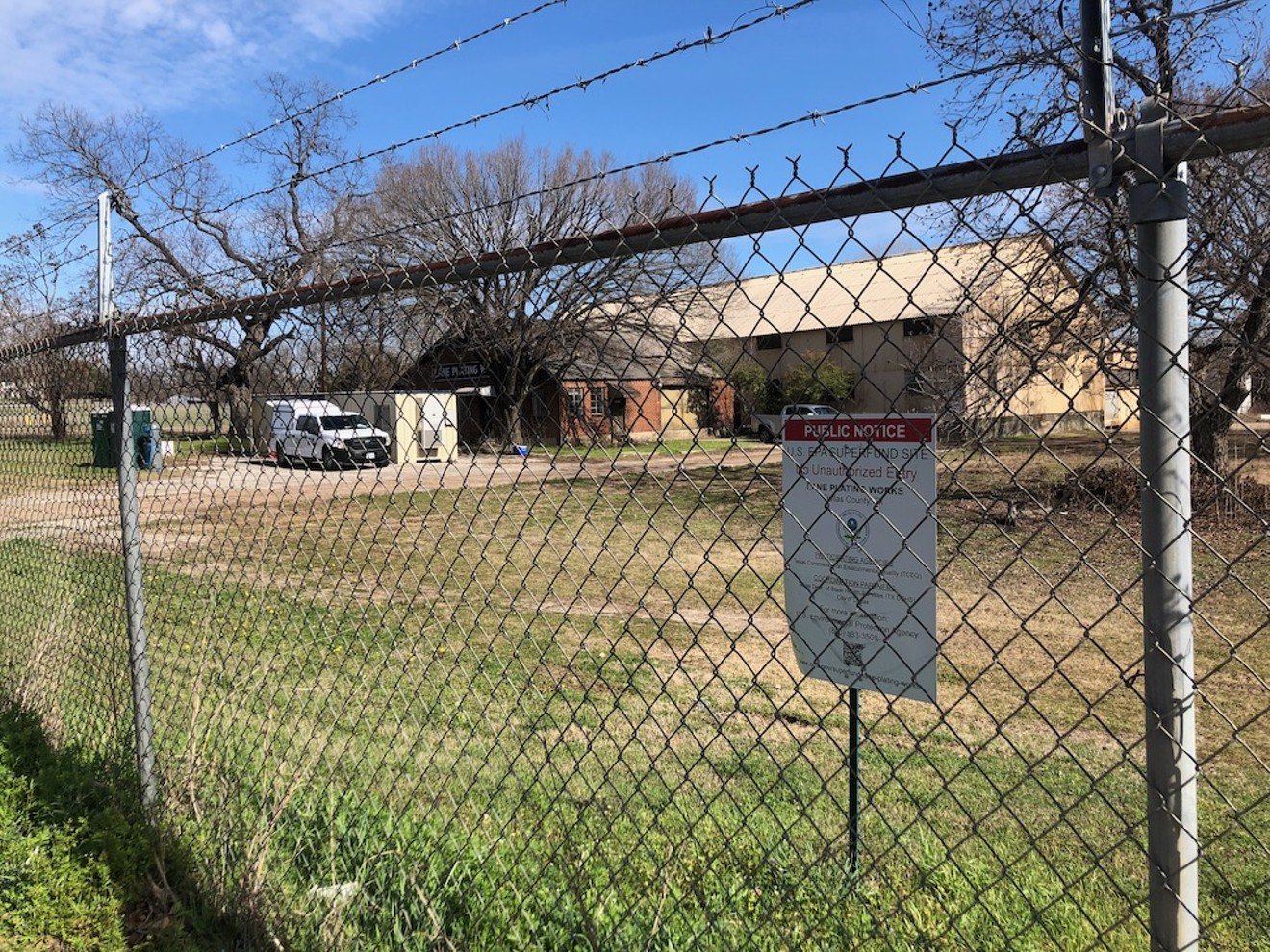 The Lane Plating Works facility was named a Superfund site in 2018 following years of environmental violations. Lucas Manfield
The Environmental Protection Agency has promised to test soil in neighborhoods bordering a southern Dallas Superfund site in an effort to address community concerns about the presence of heavy metals.

The announcement came at a community meeting Thursday, when the EPA presented the results of an initial report showing heightened levels of arsenic and hexavalent chromium at locations across the Lane Plating Works property, including one on its border with Bonnie View Road.

Kenneth Shewmake, the EPA's project manager, showed the audience a map of the testing locations, which had a cluster of red dots near the center. "We know there’s some bad numbers close to the building,” he said. When members of the audience pressed him on poor test results on the borders of the property, he acknowledged that the test results appeared to imply that the chemicals were spreading through surface water runoff.

Several streams run through the property, which borders a wetland to the east and a residential neighborhood to the north.

The soil sample collected near the roadway had fives times the agency's target concentration of hexavalent chromium and nearly 13 times the level for arsenic. Other sites on the property exceeded these targets by much larger amounts.

The EPA also used the community meeting, held at the Highland Hills Branch Library, to announce the creation of an advisory group made up of representatives from the local community. It's designed to act as a liaison between the agency and the community, and is chaired by retiree Allen McGill, who lives a few blocks away from the site.

McGill said he was reassured by the initial test results. "The contamination doesn't seem to have been as extensive outside the immediate boundaries of the property as we may have suspected," he said.

But concerns that chemicals may have leaked out into the surrounding properties as well as the risk of cross contamination due to foot traffic led the group to recommend that the EPA do additional testing.

Shewmake said the EPA will be testing surface soil from 15 additional locations — including six in residential areas near the site as well as a baseball field — and promised to provide monthly updates as the results come in.

The EPA has already put up warning signs and upgraded fencing around the site in response to the report, which was completed late last year by an environmental consulting firm. The agency promised to target additional testing in areas affected by rainwater runoff.

"We will follow the contamination as far as it goes. If it goes five miles, we will sample five miles," said John Meyer, EPA's regional head of Superfund remediation.

The EPA will release a follow-up report later this year that will outline any health and safety risks associated with contamination at the site.

Almost 100 tons of chemical waste already have been removed from the site, a 90-year-old electroplating facility that filed for bankruptcy in 2015 after its owners tussled with regulators for years over ongoing labor and environmental safety violations. It was named a Superfund site in 2018, paving the way for a massive federally funded effort to decontaminate the site.

The timing, however, is still unclear. Meyer said that after the EPA selects a cleanup strategy in 2022, the site will then have to wait to be chosen off a list of prioritized projects across the country. "A site like this can easily cost $10 million. That is a lot of money, and we have to very wisely use these funds," he said.

That's not soon enough for Lorie Blair, the city planning commissioner for the district. "If it's not safe enough to live in today, I need to know," she said at the Thursday meeting. She expressed frustration over the history of industrial dumping in southern Dallas and said it was difficult to make smart planning decisions when the future of the site and the long-term safety of the surrounding area were unclear.

Blair felt that the EPA representatives' responses to questions from the community — and their repeated refusals to give a concrete time frame for the cleanup — were arrogant and condescending.

"If you guys are not going to come and live in it, speed it up," she said.