An arrest has been made in the case involving the death of a Grand Prairie police officer. Brian Sevald
On Thursday afternoon, Grand Prairie police announced that an arrest had been made in connection with the Monday night chase that resulted in the death of officer Brandon Tsai. The 32-year-old Tsai was in pursuit of a suspect driving a vehicle with a fraudulent license tag Monday night when he lost control of his patrol vehicle and crashed into a light pole. He later died from his injuries.

At a press conference, Grand Prairie Police Chief Daniel Scesney said Colbie Hoffman, 22, turned himself in to Dallas police on Wednesday night to avoid being arrested in Grand Prairie. No reason was provided for Hoffman's decision. Hoffman was also charged with eight outstanding warrants from Waxahachie, DeSoto and Bedford.

When Grand Prairie officers arrived in Dallas to apprehend Hoffman, Scesney said, they used Tsai’s handcuffs to detain him. Scesney expressed thanks for the “intense and collaborative effort” from his department, the Dallas Police Department and the FBI, later adding that the investigating officers had “virtually nothing to go on” when the investigation began.
click to enlarge 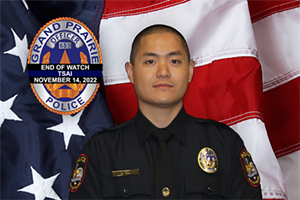 Grand Prairie officer Brandon Tsai, 32, died in a car accident while pursuing a suspect driving a vehicle with fraudulent license tags. Colbie Hoffman, 22, was arrested in the death after turning himself into Dallas police.
Grand Prairie Police Department

Hoffman is being held on bonds totaling $275,000 and is charged with a second-degree felony of evading arrest and detention causing death, as well as tampering with evidence, a third-degree felony.

Grand Prairie Police Department public information officer Mark Beseda said Tsai had discerned the paper tag on Hoffman's silver Chevrolet Malibu to be “clearly fictitious by design” before attempting to pull him over on Monday night. The on-duty death of Tsai is the latest incident related to the growing problem of fraudulent paper vehicle tags in Texas.

A vehicle might have fake tags for a number of reasons, including trying to cover for a vehicle that would likely fail inspection or to help disguise a stolen vehicle. Auto dealers have been caught selling vehicles with fake tags to hide the actual mileage of the vehicle from the customer.

Considering the extensive amount of damage that fake paper tags can cause, they’re surprisingly simple for counterfeiters to make and sell. According to a 2021 NBC 5 investigation, an individual in Texas needs little more than $800 to obtain a car dealer license and begin issuing temporary paper tags. Some measures have been taken in the past year by the Texas Department of Motor Vehicles to create a tougher barrier for counterfeiters, but the problem has persisted.

Operating a vehicle with a fraudulent paper tag is a Class C misdemeanor, subject to a $500 fine. Some officers are able to easily identify fake tags, as Tsai did, but that’s not always the case.

Scesney said the number on the temporary plate Hoffman had on the vehicle he was driving when Tsai attempted to pull him over has been found on more than 200 other vehicles, including 50 Chevrolet Malibus, around North Texas. The state recently announced plans to completely redesign temporary tags to decrease the likelihood of counterfeiting.

According to a press release from the Texas DMV, the changes set to be deployed on Dec. 9 include a new Texas flag watermark, enhanced depiction of tag expiration date, vehicle year and make, and name of issuing dealer. The tags will also contain embedded data and text linked to law enforcement databases, which can be created only by internal department computer systems.

The increased scrutiny on fake tags is helpful, Scesney said, but he noted that the issue has gotten out of hand. "We can have so many fictitious tags that saturate a community. It is frustrating," he said.

A memorial service for Tsai will take place at Gateway Church in Grand Prairie at 11 a.m. on Monday, Nov. 21.
KEEP THE DALLAS OBSERVER FREE... Since we started the Dallas Observer, it has been defined as the free, independent voice of Dallas, and we'd like to keep it that way. With local media under siege, it's more important than ever for us to rally support behind funding our local journalism. You can help by participating in our "I Support" program, allowing us to keep offering readers access to our incisive coverage of local news, food and culture with no paywalls.
Make a one-time donation today for as little as $1.
Kelly Dearmore