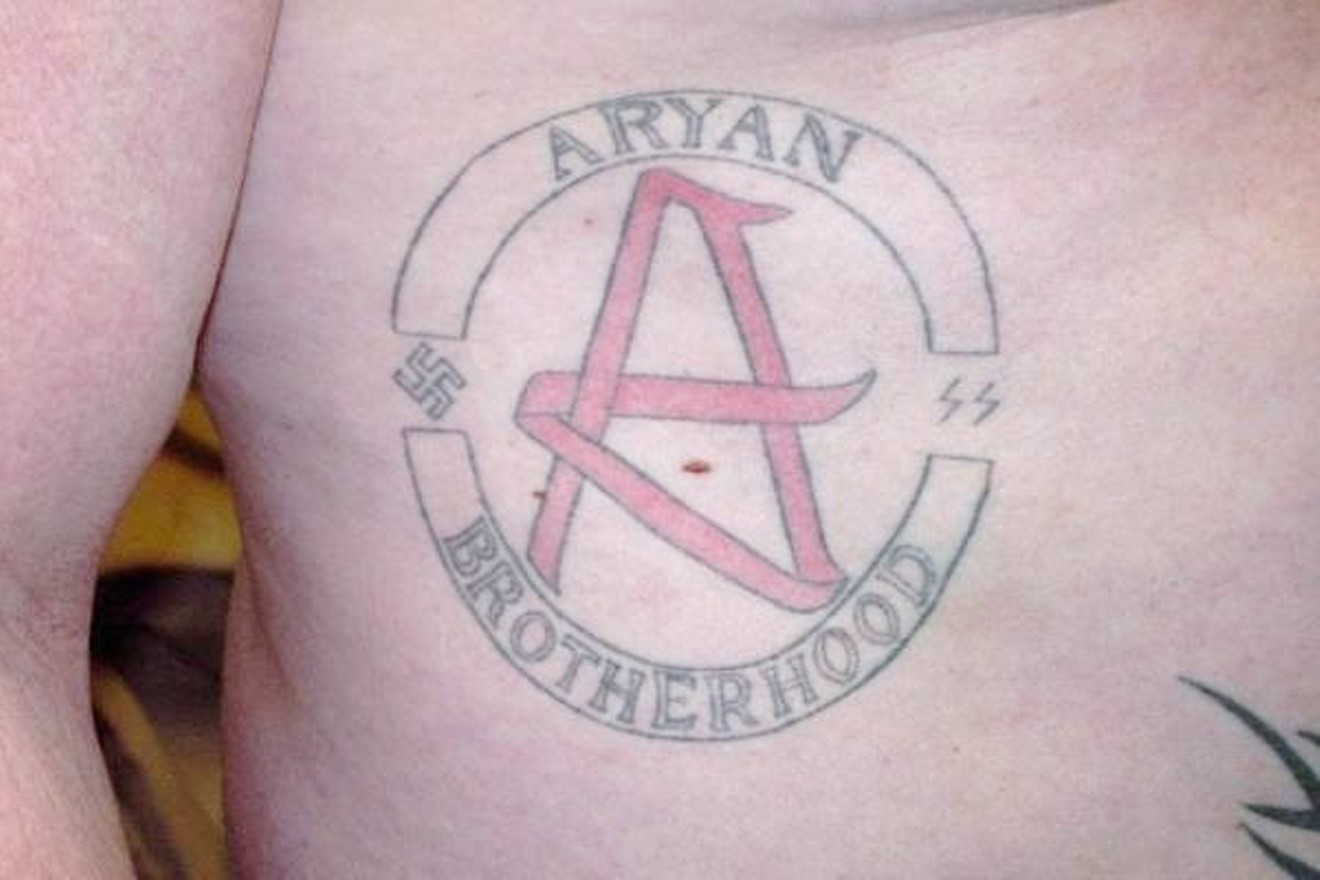 An Aryan Brotherhood tattoo. U.S. Department of Justice
Fifty-one individuals are in jail and six others are being sought after a massive federal investigation into methamphetamine distribution and kidnapping by white supremacist prison gangs in North Texas. According to U.S. Attorney for the Northern District of Texas Erin Nealy Cox, federal authorities seized or diverted more than 190 kilograms of meth, 31 guns and nearly $400,000 in cash over the course of their investigation from October 2015 to April 2018.

“Not only do white supremacists gangs subscribe to a repugnant, hateful ideology, they also engage in significant, organized and violent criminal activity,” United States Attorney General Jeff Sessions said Monday in a statement about the bust. "The quantities of drugs, guns and money seized in this case are staggering."

According to court documents, the 57 people named by the feds Monday conspired with each other to acquire and sell methamphetamine. As part of that conspiracy, they kidnapped a man, identified in their indictment as Victim A, over the alleged nonpayment of a $600 drug debt.

In late January, according to the feds, Justin Nelson, a member of the Aryan Circle, negotiated a deal to sell $600 in meth to Ralph Adams and Jerry Lunsford, members of the Aryan Brotherhood of Texas. Adams and Lunsford sent Victim A to pick up the drugs, but Nelson stole the money instead.

Adams and Lunsford confronted Victim A about the missing drugs, and Victim A told them Nelson had robbed him. Adams, Lunsford and a woman named Amanda Gallippo headed to Nelson's Grand Prairie home to confront him, according to the feds.

When they arrived, the group discovered the shared white supremacist affiliations, and Nelson "falsely, but convincingly, claimed that Victim A had stolen from Adams and Lunsford," the feds allege.

Adams, Lunsford, Nelson and Gallippo then held Victim A against his will for several days at the home in Grand Prairie.


Victim A told a federal grand jury that Justin Nelson chopped off a portion of his left index finger with a black hatchet.

At various times during the kidnapping, according to the indictment, Adams pointed a pistol at Victim A's head, Lunsford threatened to kill Victim A and Gallippo knocked Victim A out by hitting him on the head with a large wooden object.

Victim A told a federal grand jury that Nelson chopped off a portion of his left index finger with a black hatchet.

Eventually, Adams and Lunsford told Nelson to take Victim A to another location and kill him, but Adams let the victim go instead, according to the feds.

In addition to the kidnapping, Adams, Lunsford, Nelson and Gallippo are accused of engaging with members of other gangs, including the white supremacist groups the Aryan Brotherhood, the Peckerwoods, the Soldiers of Aryan Culture and the Dirty White Boys, along with the Hispanic prison gang Tango Blast, to "acquire, distribute and deliver" more than 500 grams of methamphetamine in North Texas.

Each of the arrested suspects in the case made an initial appearance in front of a federal judge last week or was expected to do so Monday afternoon, according to the U.S. Attorney's Office.

Monday's announcement marks the second large-scale bust of alleged white supremacist drug traffickers in North Texas in the last year. In August, prosecutors in the Northern District of Texas wrapped up what they called the largest ever case focusing on drug distribution by white supremacist prison gang members with their 89th related conviction.