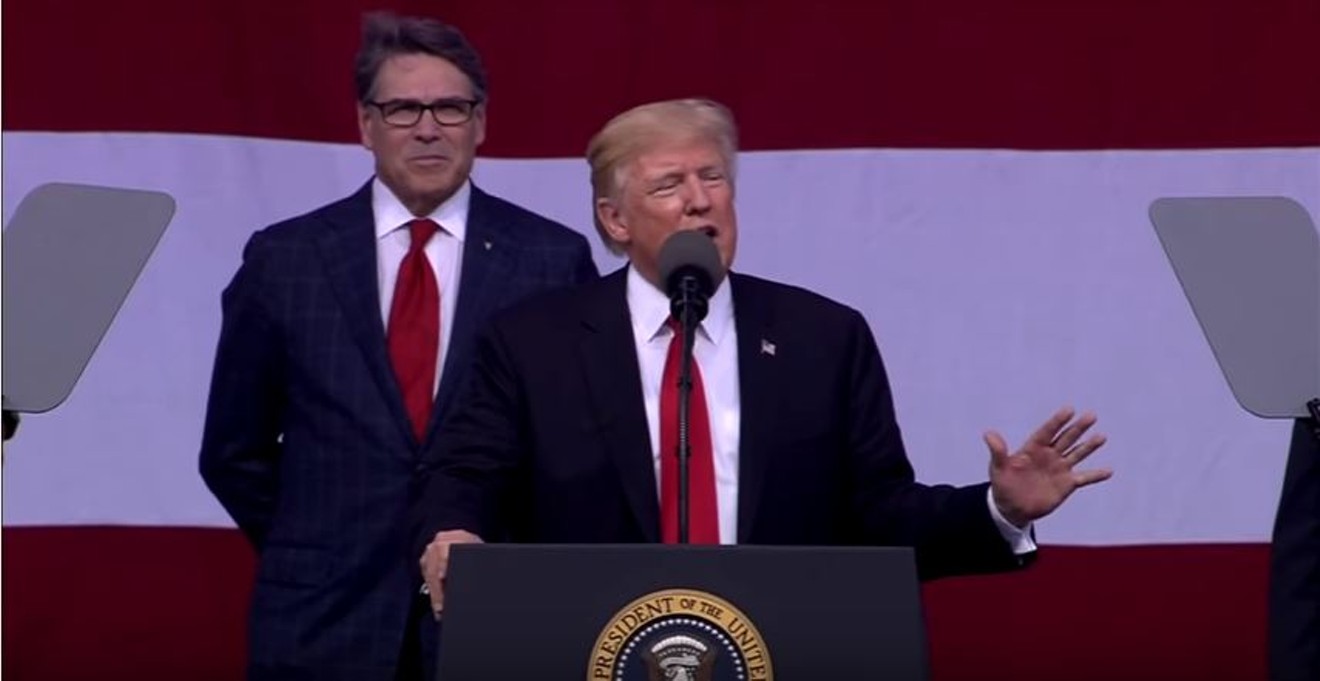 Donald Trump, flanked by Rick Perry, addresses the Boy Scouts' annual jamboree in 2017. The White House
For more than two years, Energy Secretary and former Texas Gov. Rick Perry was an anomaly in President Donald Trump's administration. He managed, largely, to tiptoe through the tulips, staying out of the headlines and keeping his job, unlike so, so many others in the executive branch. That run is over, as Wednesday on Capitol Hill proved.

The more the public learns about the budding Ukrainian scandal, the worse things look for the former governor. Perry, we learned in October, was part of the "Three Amigos," a group of Trump officials conducting shadow foreign policy in Ukraine.

As news about the president's apparent threats to withhold military aid from Ukraine unless Ukrainian President Volodymyr Zelensky announced that he was investigating an oil company tied to former Vice President Joe Biden and Biden's son Hunter Biden broke in mid-October, Perry announced that he would be leaving the Energy Department at the end of the year.

Then things really started going downhill. Two weeks ago, Gordon Sondland, the U.S. ambassador to the European Union, testified, according to transcripts, that it was Special Envoy Kurt Volker, Perry and a former aide of Perry's who first told him that Trump wanted Ukraine to investigate Burisma. Hunter Biden served on Burisma's board. Sondland did not say in his testimony whether Perry mentioned the Bidens specifically.

Wednesday, Sondland testified in public as part of the U.S. House's impeachment inquiry. He threw Perry under the bus again.

"Perry spoke to Rudy Giuliani only once at the president's request. No one else was on that call. At no point before, during or after that phone call did the words 'Biden' or 'Burisma' ever come up in the presence of Secretary Perry." — Shaylyn Hynes

"Mr. Giuliani conveyed to Secretary Perry, Ambassador Volker and others that President Trump wanted a public statement from President Zelensky committing to investigations of Burisma and the 2016 election," Sondland said. "Mr. Giuliani expressed those requests directly to the Ukrainians. Mr. Giuliani also expressed those requests directly to us. We all understood that these prerequisites for the White House call and White House meeting reflected President Trump's desires and requirements."

Sondland's accusation — that Perry knew about the scheme that might lead to Trump's impeachment and went along with it — led to renewed calls that he testify as part of the inquiry, something that he's refused to do to this point.

Ambassador Sondland just testified under oath that the President directed a corrupt scheme to abuse the power of his office for personal gain.

He testified that Mike Pompeo, Mick Mulvaney, John Bolton, and Rick Perry knew about it.

Their refusal to testify is utterly damning.

Through an Energy Department spokeswoman, Perry said Sondland lied during his testimony.

"Ambassador Sondland's testimony today misrepresented both Secretary Perry's interaction with Rudy Giuliani and direction the secretary received from President Trump," Department of Energy spokeswoman Shaylyn Hynes said. "As previously stated, Secretary Perry spoke to Rudy Giuliani only once at the president's request. No one else was on that call. At no point before, during or after that phone call did the words 'Biden' or 'Burisma' ever come up in the presence of Secretary Perry."
KEEP THE DALLAS OBSERVER FREE... Since we started the Dallas Observer, it has been defined as the free, independent voice of Dallas, and we'd like to keep it that way. With local media under siege, it's more important than ever for us to rally support behind funding our local journalism. You can help by participating in our "I Support" program, allowing us to keep offering readers access to our incisive coverage of local news, food and culture with no paywalls.
Make a one-time donation today for as little as $1.