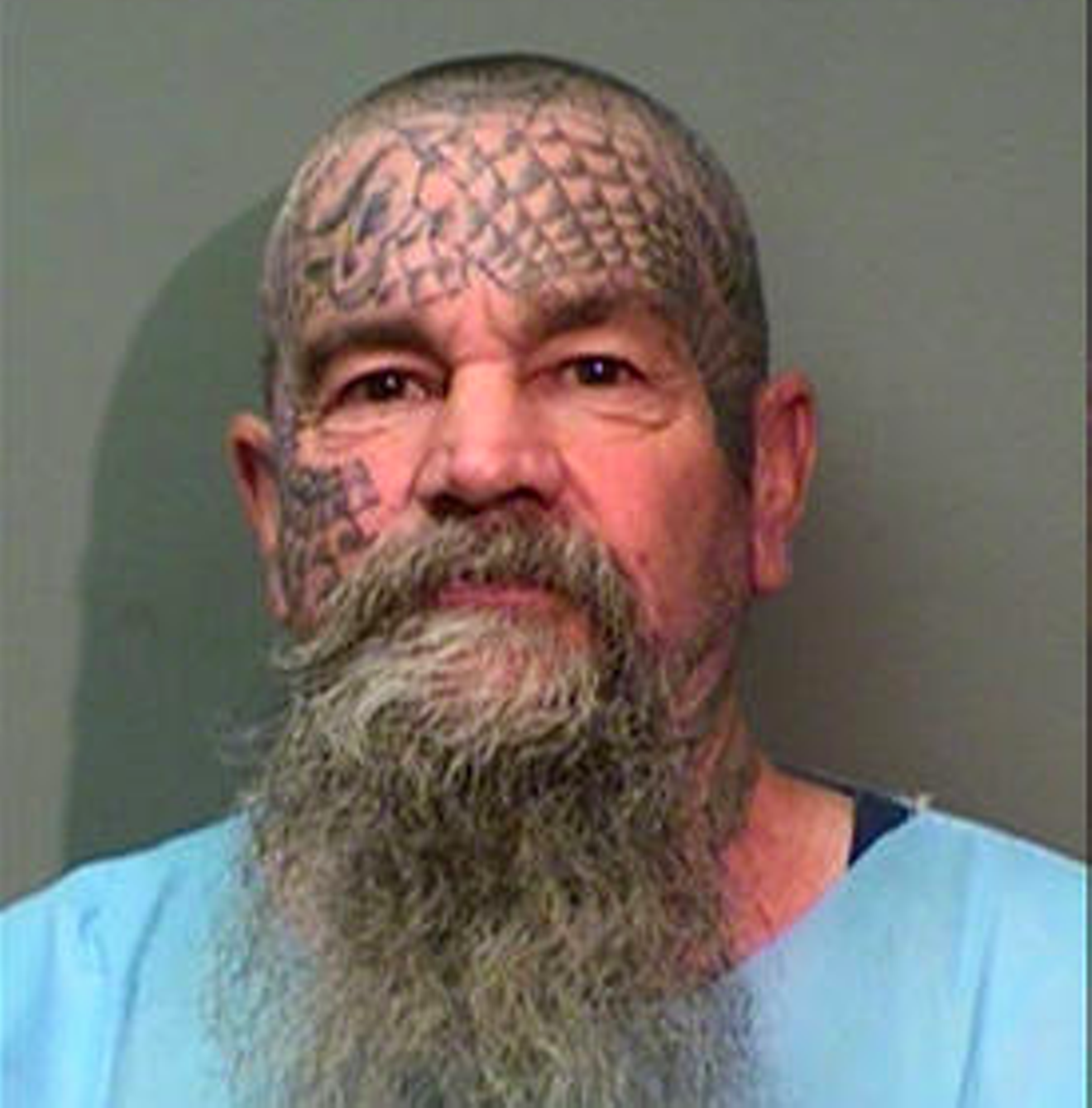 Howard Wayne Baker Fort Worth police
About 20 members of the Bandidos, one of the most notorious outlaw motorcycle clubs in Texas, poured into the front and rear doors of Gator’s Jam Inn in Fort Worth on a Friday evening in early December 2014.  Reports of gunfire soon followed. “There’s been 15 shots so far, and they’re still shooting,” one of several 911 callers reported to Fort Worth police.

The Bandidos' Fort Worth chapter president, Howard Wayne Baker, was one of three arrested in connection with the shooting. He was charged with engaging in organized crime and directing the activities of a street gang. On Tuesday, the 62-year-old was sentenced to 45 years for one charge and 40 years for the other, to be served concurrently in prison.

Fort Worth police said that in 2014, the Fort Worth Bandidos ambushed three rival outlaw motorcycle clubs — the Cossacks, the Ghost Riders and the Wino’s Crew — at the bar. When the smoke cleared, Geoffrey Brady, a 41-year-old member of the Ghost Riders, had been shot in the head, and two others also sustained injuries.

“They dragged Brady out of the front door and executed him in front of his wife and friends,” said Allenna Bangs, Tarrant County assistant district attorney, in Baker’s trial last week. “They stood over him in a circle, and Howard Baker was standing in that circle."

“What is most important to him [Baker] is that you will respect his position here in this town. You will answer to him, you will pay homage to him and you will do the things that you are told,” Bangs said. “The Ghost Riders didn’t want to do that, so they executed Brady for that.”

A motorcycle gang expert with the Bureau of Tobacco, Alcohol and Firearms who testified in Baker’s trial estimated that the Bandidos have more than 3,600 members in 210 chapters in 22 countries. The trial had law enforcement officials on edge, with Texas Department of Public Safety troopers lining the outside of the courthouse.

The turf war between the Bandidos, a 51-year-old club, and the Cossacks, a 46-year-old club, has been making headlines for years. Law enforcement sources claimed that in 2013, a new generation of Cossack leaders wanted to make a mark on the outlaw landscape in Texas. They began wearing Lone Star State patches on their vests but failed to pay their dues to the Bandidos, who claimed Texas as their turf.

“A lot of newer members are veterans, and they want to prove their independence and equality [with the Bandidos]. It’s a generational thing that is reshaping the culture,” explained Don Charles Davis, a writer for the biker blog The Aging Rebel, to The New York Times after the May 2015 shootout in Waco.

Law enforcement said the brewing rivalry between the Cossacks and the Bandidos led 48-year-old Jack Lewis, former president of the Abilene chapter of the Bandidos, to stab two Cossacks during a fight outside a restaurant in November 2013. Another Bandidos member, Wesley Mason, testified in Lewis’ trial that he was responsible for the stabbings, and Lewis was found not guilty of aggravated assault with a deadly weapon in December 2015.

In a March 2015 incident, about 10 Cossacks beat a Bandidos member on the side of Interstate 35 near Waco. The same day, a group of Bandidos hit a Cossack member in the head with a hammer because he refused to remove his Lone Star State patch.

In May 2015, the war made national news during a shootout at a Twin Peaks restaurant in Waco. It was reportedly supposed to be a “coalition meeting” to bring together Texas' "one-percenter" motorcycle clubs, a term that identifies the 1 percent of bikers who consider themselves outlaws, compared to the 99 percent who ride leisurely. Instead, a shootout between bikers and police occurred shortly after the Bandidos arrived.

When the smoke cleared, seven Cossacks, one Bandido and a biker who supported the Bandidos were dead, about 18 were injured and 170 were arrested. Bikers like Jacob “Rattle Can” Lee Rhyne, known as a dedicated family man, were left convulsing and bleeding for up to 45 minutes with no medical help from police.

The Texas Department of Public Safety issued a warning about the tension brewing between the one-percenter motorcycle clubs before the Waco shootout.

“The conflict may stem from Cossacks members refusing to pay Bandidos dues for operating in Texas and for claiming Texas as their territory by wearing the Texas bottom rocker on their vests, or ‘colors’ or ‘cuts,’” the May 1 bulletin said. It indicated that one-percenter motorcycle clubs had “issued an order to kill anyone in uniform.”

An August 2016 fight between outlaw motorcycle clubs in El Paso led to the arrest of several Bandidos, including 48-year-old Carlos Sepulveda and three other top leaders in the El Paso chapter: 60-year-old Juan Martinez, president; 32-year-old Thomas Decarlo, secretary; and 45-year-old James Heredia, sergeant-at-arms. Each was charged with aggravated robbery while engaging in organized criminal activity.

Although their rivalry with the Cossacks has been making headlines for several years, the Bandidos' beef with the Ghost Riders is much older. In 1979, Texas Monthly reported that the Ghost Riders were formed as a Bandidos “farm league” but drifted beyond the original club's control. The Ghost Riders allied with the Dallas Banshee chapter, another motorcycle club hostile to the Bandidos, in the late '70s.

After the alliance, Steve “Trapper John” Vance, a Ghost Rider, was wounded by a shotgun blast from a passing car he said had been driven by a Bandido. Vance later pleaded guilty to the shotgun shooting of Bandidos member Big Jam Bagent and received 10 years probation. He was later found hiding out from the Bandidos in an apartment with an arsenal of guns to protect him.

In December 2013, law enforcement officials in Seattle said Karl Twilleager, an aging leader of the Ghost Riders, was involved in a plot to bomb a bar associated with the Bandidos.

“This defendant and his gang planned a violent attack on rivals that could have caused serious injuries and deaths,” the U.S. Attorney’s Office said in a prepared statement. “Innocent bystanders could have been caught up in the carnage.”

Twilleager had recently finished a prison sentence for shooting a man three times, loading his body into the trunk of a car and dumping his corpse on the roadside.

At last week's trial for Baker, the Fort Worth Bandidos' chapter president, several witnesses claimed the group stormed Gator's bar shot at the Ghost Riders and members of other one-percenter motorcycle clubs who wore Lone Star State patches on their vests. Witnesses recalled screams of “get down” and “call 911.” One witness told jurors that she found Brady, the Ghost Rider who was killed, on the ground with blood pouring from his face.

Justin Blakely, who played fiddle at Gator’s but left before the shooting began, said he knew what was going to happen when he left the bar and saw the Bandidos. He said he heard multiple gunshots and saw several flashes.

“Immediately after the gunfire, I saw them get on their bikes and leave,” he said.

Pamela Boggess, lead prosecutor for the Tarrant County District Attorney’s Office, told the Observer after Baker was convicted and sentenced Tuesday morning that they are grateful for the courage demonstrated by witnesses who came forward to testify and the consideration given to this case by the jurors.

"We hope that this verdict will finally bring some measure of peace to Geoffrey Brady’s family,” she said.