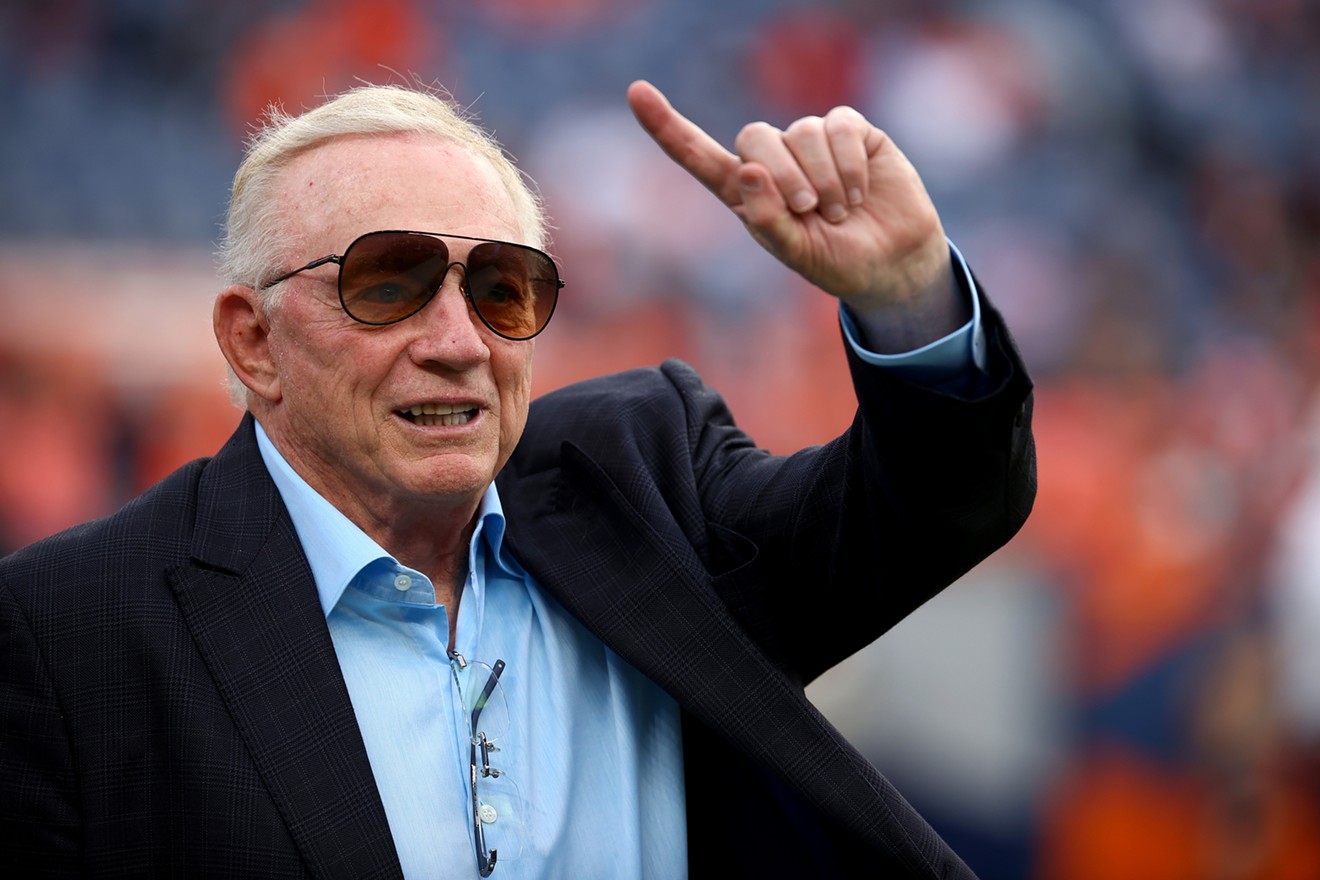 It's a safe bet Cowboys owner Jerry Jones isn't signaling "We're No. 1" here. Maybe he's ordering a hot dog. Jamie Schwaberow/Getty Images
Over a quarter-century the Dallas Cowboys have blossomed into an $8 billion company by hawking defective products … and no one seems to mind.

It’s late August at The Star in Frisco, and Jerry Jones is about to utter one of the most ironic insults in the history of Dallas-Fort Worth sports. As he playfully spars with ESPN personality and notorious hater Stephen A. Smith on live TV, Jones attempts to throw a haymaker that might as well be a boomerang:

Funny, because after a quarter-century of style over substance and teasing over triumph, Jones’ Dallas Cowboys have deteriorated into The Beatles.

Not the authentic musical quartet that revolutionized music in the 1960s. More so A Hard Day’s Night, the knock-off act that regularly tours Dallas hoping fans sing along to the counterfeit oldies so loud they don’t notice – or care – they’re actually watching John Lemon, Paul McFartney, George Wearison and Bingo Starr.

Going on 26.5 years with nary a sniff of a conference championship game much less a Super Bowl, Jones’ famous-yet-faux Cowboys have faded into merely a selfie tribute band:

The Conboys occasionally sparkle in the regular season, only to come unraveled and unglued at the crunch like cheap imitation “Oaxley” sunglasses or a “Lewis” Vuitton purse.

Yet year after year their fans, hypnotized by the Arkansas huckster’s Svengali, come back as willing, irrationally optimistic stooges convinced this is finally their season. They also likely believe that Dallas’ flying red Pegasus is made of Twizzlers, that J.R. Ewing resides at Southfork and that – finally – Lucy won’t dramatically yank the football away from their Charlie Brown.

Nostalgic Cowboys fans are so desperate for the glory days that they’ve become gullible enough to actually think the present trio of Dak Prescott-Ezekiel Elliott-CeeDee Lamb can mimic the success of past triplets Aikman-Emmitt Smith-Michael Irvin. Deep down they know the 2022 Cowboys will only be impersonators of the 1995 Cowboys, but they can’t help themselves.

Mainly, because Jones won’t let them.

He remains the most shrewd marketing genius and savvy businessman in the history of the NFL, if not all of professional sports, pulling the strings on an “America’s Team” that in reality is nothing more than “America’s Tease.”

Time and again fans are titillated by the lifted skirt and bulging cleavage of September, never to see all the naughty bits come January.

Not everyone, however, falls for the farce. Top Gun: Maverick may be a box-office winner decades after the original, but long-time ESPN analyst Michael Wilbon says Jones will never be able to duplicate the Cowboys’ 1990s success.

“The Cowboys have done all kinds of wonderful things in the last 20 years that were fine to notice and point out, and maybe even celebrate from time to time in October and November and every now and then December,” Wilbon said in the midst of the team’s promising 7-2 start in 2021. “But what the hell happens to the Cowboys by the time we get to January? They implode. They go south. They look like the Cowboys of recent vintage, which is to say, junk.”

Through all the monumental pratfalls, the Cowboys have maintained the same common denominator and sole shot-caller: owner/general manager Jones. Donnie Nelson, who helped the Dallas Mavericks win an NBA Championship and brought to the franchise icons Dirk Nowitzki and Luka Doncic, was fired in 2021. Jon Daniels, the architect of the Texas Rangers’ World Series teams in 2010-11, was terminated in mid-August. Despite not accomplishing diddly-poo on the field since gas was $1.26, Jones perseveres.

But simultaneously because of him and in spite of him, the Cowboys inexplicably manage to remain audaciously popular without authentic success.

And, by the way, they’ve ascended to the most valuable sports franchise on the planet. Only Jones could nurture an $8 billion company by essentially selling defective products.

Jones is both Barnum and Bailey, cajoling fans under his circus tent with three rings that these days are musty, outdated relics unable to conceal his often-muddy underbelly. With him at the helm, the Cowboys – good, bad and ugly – are always top of mind and tip of tongue.

Jones made headlines just this offseason for everything from having a car accident in Highland Park to paying a $2.4 million settlement to four team cheerleaders in a voyeurism lawsuit against a former employee, to shelling out another $3 million to a woman claiming he was her biological father, and to assuring former Super Bowl-winning coach Jimmy Johnson he’d be inducted into the team’s prestigious Ring of Honor but then stubbornly refusing to set a date.

His command of the spotlight powers Dallas’ unprecedented visibility. Whether they love or loathe them, NFL fans are constantly aware of the Cowboys.

Despite only one playoff win during his six-year career, Prescott has the NFL’s sixth-best selling jersey. Last season the Cowboys had five of the league’s Top 50, leading them to again be No. 1 in merchandising revenue.

“The single biggest reason the Cowboys are so hated is because the owner, over those last 27 years, has insisted on being the team's biggest star.” – Skip Bayless

Stephen A. Smith makes a living pretending to despise them. Fox TV personality Skip Bayless makes his pretending to adore them. They continue to be the league’s biggest attraction, this season again earning the maximum six prime-time TV appearances including a coveted Thanksgiving afternoon slot no team dares to challenge. Turn on the TV to practically any sports network and you will see a talking head with Cowboys connections, including CBS (Tony Romo and Steve Beuerlein), NBC (Jason Garrett), Fox (Jimmy Johnson, Daryl Johnston and Marcellus Wiley), ESPN (Aikman, Marcus Spears and Chris Canty) and NFL Network (Irvin and Brian Baldinger).

Despite their lack of accolades, who did DirecTV hire for its new commercial featuring the Real Housewives taking on football players? Prescott and Lamb.

Last year Jones got the Cowboys on HBO’s Hard Knocks. This year he held a “blue carpet” soiree at the team’s plush headquarters, inviting high-profile media members to attend, ogle and gush to their respective audiences.

“The single biggest reason the Cowboys are so hated is because the owner, over those last 27 years, has insisted on being the team's biggest star,” Bayless said. “Jerry Jones is so ubiquitous, so omnipresent. He does two radio shows a week. He’s constantly inserting himself in front of every camera, every microphone. He does postgame interviews that no owner ever does on a regular basis. And the truth is, he even makes Cowboy fans hate him.”

While the “owner should fire the GM” mantra has echoed through AT&T Stadium for years, there’s no denying Jones’ business acumen.

Whether charging $75 for parking, refusing to decrease ticket prices during COVID or being the innovator who this offseason partnered with Blockchain as the team’s official cryptocurrency, Jones has transformed football into a fortune.

His brand may outweigh his team, but he’s turned a $140 million investment in 1989 to the historic $8 billion Forbes valuation. Jones’ Cowboys are worth almost twice as much as the Mavericks ($2.7 billion) and Rangers ($2 billion) combined.

How does he do it? By persuading Cowboys fans to believe what they see now is thiiiiiiissss close to what they saw then.

Jones may be turning 80 in October, and he may tear up over the recent deaths of good friend Larry Lacewell and forever personal assistant Marilyn Love. But make no mistake about it, he’s not vacating his throne any time soon.

The last 26 empty seasons suggest the Cowboys will instead foster hope before ultimately crushing souls. If so, the uber-resilient Jones – and heir to his kingdom, son Stephen – will be back again in 2023. And beyond.

After delivering his zinger to Smith at The Star, Jones invited the “fraud” to ride in his helicopter and later offered an invitation to someday come aboard his 357-foot, $250 million yacht.

Keep fans of your tribute band close, and your enemies even closer.
KEEP THE DALLAS OBSERVER FREE... Since we started the Dallas Observer, it has been defined as the free, independent voice of Dallas, and we'd like to keep it that way. With local media under siege, it's more important than ever for us to rally support behind funding our local journalism. You can help by participating in our "I Support" program, allowing us to keep offering readers access to our incisive coverage of local news, food and culture with no paywalls.
Make a one-time donation today for as little as $1.
Richie Whitt
Contact: Richie Whitt