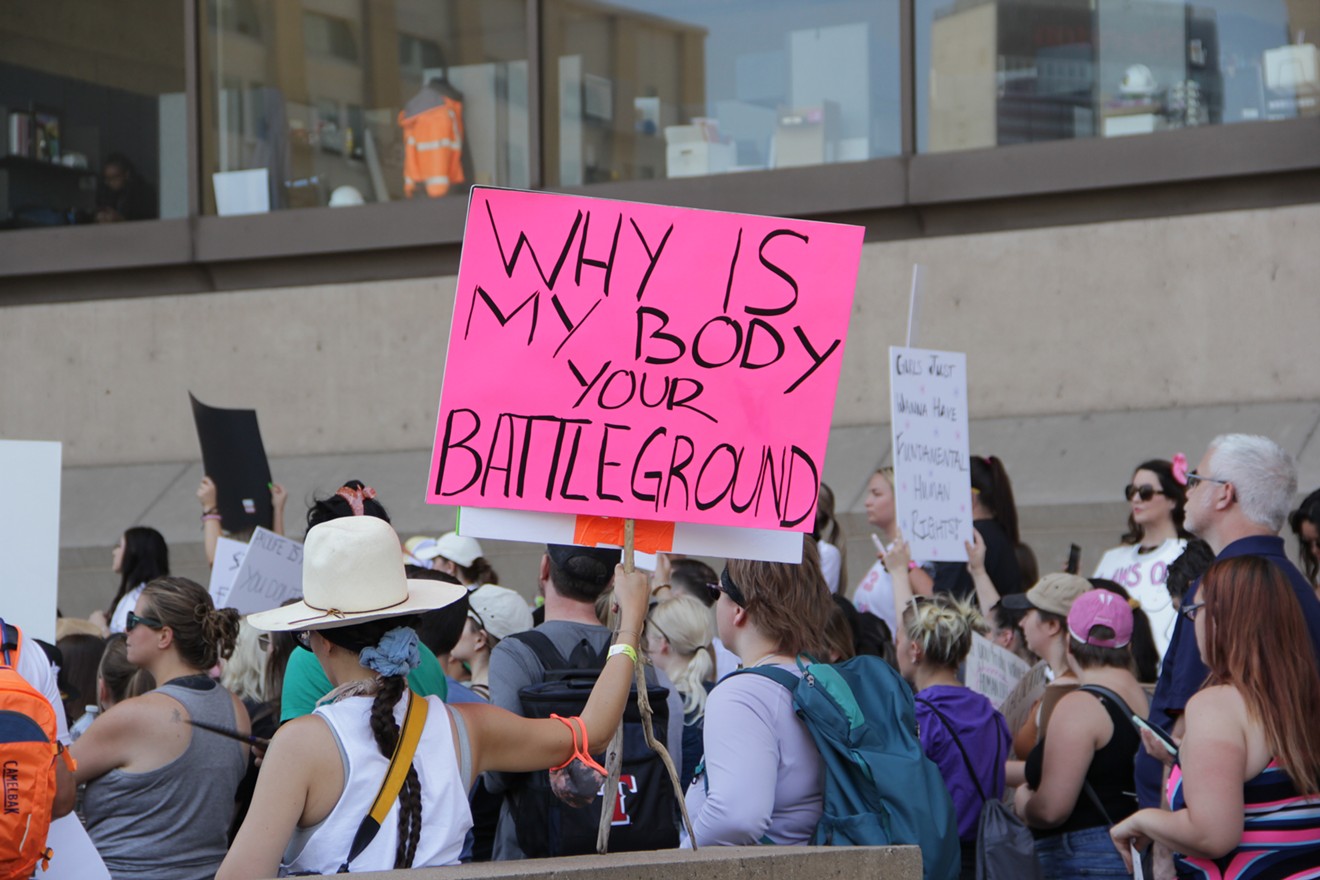 Hundreds rallied in downtown Dallas Wednesday. Kate Pezzulli
Helicopters whirred overhead and the sun beat down on the pavement as hundreds of protesters rallied outside City Hall to protest the recent U.S. Supreme Court decision denying women the constitutional right to have abortions.

Some wore shorts and tank tops and many carried along coolers, kids and signs as a crowd gathered around speakers discussing the court's decision last Friday. They described the ruling as racist, sexist and egregious.

“My body, my choice," many chanted.

Natalie Flores and Naomi Dawson came from Tyler to join the rally. The way Flores sees it, everyone deserves the right to choose how to use their own body, and many people, including some Republicans, agree.

“It’s insane how we’re still having to deal with this,” Flores said. “We’ve definitely put our foot down and support what’s happening here.”

In the middle of the crowd, some impromptu storytellers discussed their own experiences with having an abortion. For each speaker, the crowd let out roars, applause and cheers.

Ysabelle Enrriquez described the situation as devastating but said restoring access to abortion will take a lot of work. “This is not politics; this is my body. This is my health,” Enrriquez said.

The demonstrators gathered outside City Hall.
Kate Pezzulli
On the other side of the plaza a group gathered around a small contingent of anti-abortion activists. Three men stood behind a police barricade, holding signs and chanting religious slogans. In response, reproductive rights demonstrators jeered and shouted. “Fuck the church, fuck the state,” the crowd shot back. “You can’t make us procreate.”

The barricade encircled the three men almost all the way around, but not quite. The crowd on the open side started to swell and encroach into the open space where they stood, guarded by police. “Fuck you, go home, three limp dicks and a microphone,” someone shouted.

Abortions are still temporarily permitted in Texas, and an overwhelming majority of Texans oppose a complete ban on the procedure according to surveys. Reproductive rights groups and other advocates warn that outlawing abortion will traumatize people and put some at risk of serious injury or even death. The U.S. already has one of the highest rates of pregnancy-related deaths in the developed world, and Black women are three times more likely to die of pregnancy complications than their white counterparts.

The American Psychological Association says those who want but are denied access to abortions experience more anxiety and stress, lower self-esteem and lower life satisfaction than people who are able to receive the procedure. Being denied access to an abortion can worsen economic hardship, leading to poorer credit scores, more bankruptcies and evictions and a greater chance of living in poverty. (Women are also more likely to stay in a relationship with a violent partner.)

District attorneys in several counties, Dallas included, have vowed to not prosecute abortion-related offenses. But Texas Attorney General Ken Paxton has claimed that pre-Roe laws are enforceable again, arguing that they were never officially repealed.

“Some prosecutors may choose to immediately pursue criminal prosecutions based on violations of Texas abortion prohibitions predating Roe that were never repealed by the Texas Legislature,” said Paxton in an advisory earlier this week. “Although these statutes were unenforceable while Roe was on the books, they are still Texas law. Under these pre-Roe statutes, abortion providers could be criminally liable for providing abortions starting today.”

State District Judge Christine Weems in Harris County disagreed and this week issued a temporary restraining order blocking enforcement of a pre-Roe law banning banning abortions in the state. Regardless, amid the post-Roe confusion, many clinics and reproductive rights groups have already shuttered or paused their services, unsure of what’s legally permissible.

Based in Austin, Jane’s Due Process is an abortion resource providing information to teens. On their website, they recently announced they have paused all services and support related to abortion care “because of the uncertainty of the current state of the laws in Texas.”

Texas Equal Access Fund, an organization primarily run by Black, indigenous and other people of color that focuses on reproductive access, paused their helpline and other services.

Participants marched along Akard Street and weaved throughout downtown.
Kate Pezzulli
“We don’t know what Roe being overturned is going to do and what kind of legal risks it will put us in,” said TEA Fund Communications Manager Denise Rodriguez. “Now that Roe is overturned and Ken Paxton has given the green light for DAs to go ahead and start prosecuting people, even though the trigger ban itself isn’t going to be active for 30 days … [pre-Roe laws] could still put people at legal risk.

“We’re frozen right now … [and] this is what they wanted. We don’t want to be put at risk for getting involved in our racist criminal justice system.”

"We don’t know what Roe being overturned is going to do and what kind of legal risks it will put us in." - Denise Rodriguez, Texas Equal Access Fund

Earlier this week, U.S. Rep. Brian Babin, who represents Texas’ 36th Congressional district, introduced a bill urging federal authorities to “swiftly prosecute” what he described as “attacks by pro-abortion extremists.” In his press release, he described such incidents as “domestic terrorism,” claiming: “The Democrats are silent about this violence, and the DOJ is ignoring it. We must enforce our laws and protect the organizations being terrorized by these anti-life extremists.”

Although anti-abortion groups in Texas have celebrated the Supreme Court's decision, some say they're only just getting started. "Today marks a monumental victory," Texas Right to Life said in a recent statement. "But our fight is not over.

"...Pro-Lifers must remain active and bold in defending the most innocent and vulnerable members of our society. As Texans, we must take unapologetic action to build not just an abortion-free state but a fully Pro-Life Texas."

As the Dallas rally continued Wednesday afternoon, the crowd around the counter-protesters grew. The police eventually started to escort the men out of the barricade and away from the crowd.

But the crowd followed. Demonstrators walked behind the men, out of the plaza and up the street. “Abortion access is a human right,” they chanted as they followed. “My body, my choice.”

Then, the rally turned into a march. Hundreds marched up Akard Street and weaved through downtown, shouting all the while and carrying placards. People watched from restaurants and balconies. Drivers honked their horns.

Sydney Oxner, another demonstrator, spoke about why she showed up. “I don’t see any point in taking rights away from people over their own autonomy of their own bodies,” she said. “It makes absolutely no sense to me. It’s asinine that it’s 2022 and we’re literally moving back 50, 60 years.”

By 2 p.m., roughly an hour after starting their march, the group made it back to City Hall. Some went home, and others stayed and continued to rally.

“I don’t understand why we’re repealing laws that literally just give people a right to their own body, that’s it … it doesn’t make any sense to me,” Oxnar said, explaining that she had an abortion in the past.

"I would do it again given the chance," she said. "I don’t regret it, and it saved my life [and has] saved many other women’s lives, and I value that more than I value what a bunch of people that don’t know me, don’t know anything about my life, have to say about it.”

The TEA Fund’s Rodriguez expects that it will “get worse before it gets better,” adding that “this is going to be a marathon and not a sprint.”

“People need to start being willing to learn and to educate themselves about language and the issues,” Rodriguez explained, “so that we can have a stronger movement so that we can actually expand abortion access.”
KEEP THE DALLAS OBSERVER FREE... Since we started the Dallas Observer, it has been defined as the free, independent voice of Dallas, and we'd like to keep it that way. With local media under siege, it's more important than ever for us to rally support behind funding our local journalism. You can help by participating in our "I Support" program, allowing us to keep offering readers access to our incisive coverage of local news, food and culture with no paywalls.
Make a one-time donation today for as little as $1.