The Core of Dallas Could Be Right Where Amazon Belongs. Or Not. 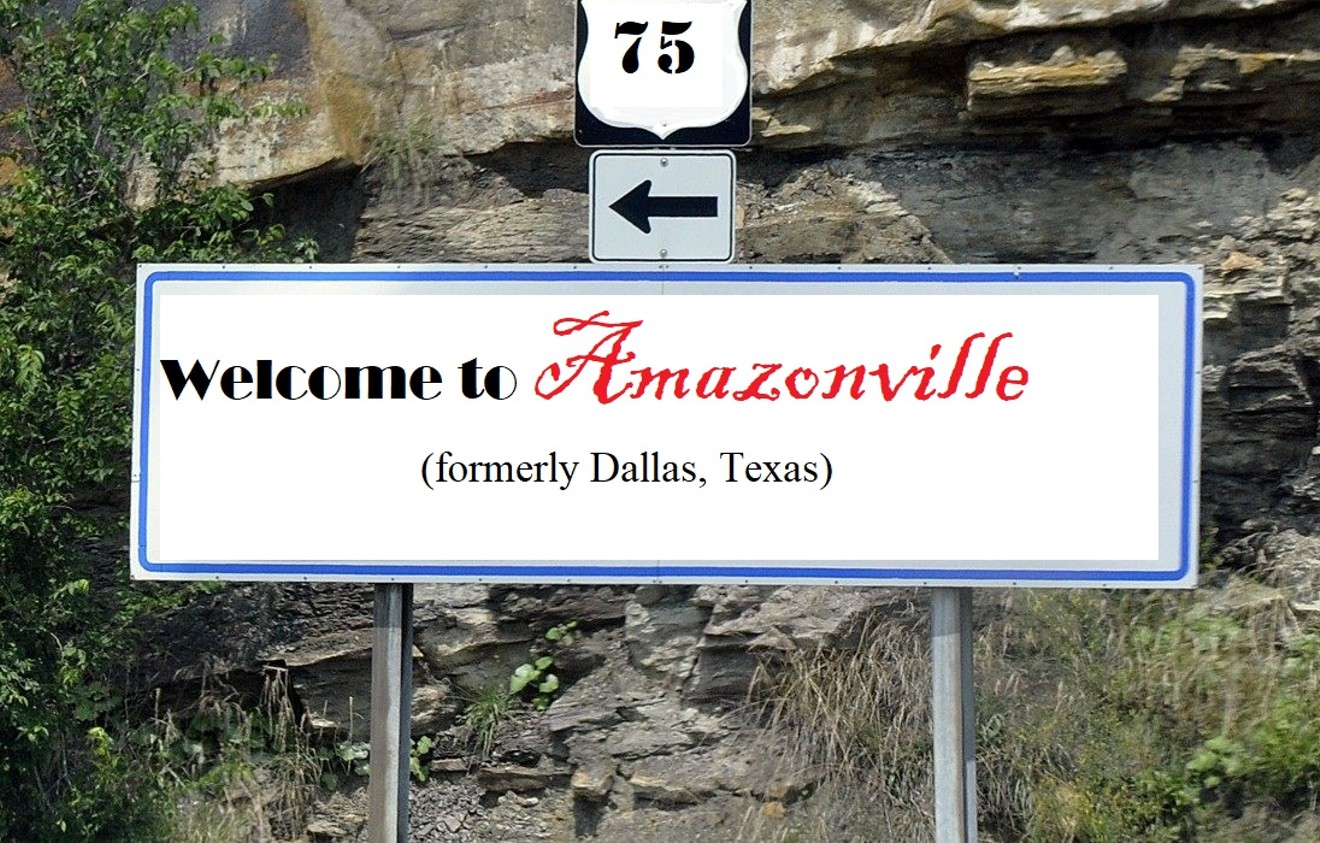 If we have to change our name and pay taxes to Amazon instead of collecting taxes from Amazon, it won't be a good deal. apologies Andreas Faessler, Wikipedia
Last week The Dallas Morning News reported that the site selection team from Amazon had been in town looking at downtown Dallas as a finalist for Amazon’s new not-the-real-headquarters development. If that’s true – and you never know – I thought I should write to Amazon. But I wanted to run my letter by you first:

Last week The Dallas Morning News reported that your site selection team was in Dallas looking at our downtown as a possible location for your new not-the-real-headquarters development. If that’s true — and you never know — there are some things I need to tell you about Dallas.

Why you would listen to me I do not know, because I’m not even sure I want you here. Dallas has entered a new exciting phase of its history, enabled in part by finally getting out from under some big powerful entities with huge egos that used to run the place like a puppet show. I will leave it to you to guess why the prospect of your own arrival might worry me.

On the other hand, that same set of facts might also offer you a reason to take Dallas seriously, especially the older core city. If you do come here, you will be stepping into a process of change just now building momentum.

This city is being swept by a new generational wave, and the leaders of that demographic change are just now coming to elected power. I know the same generational succession with its interest in urban living can be found in cities all over the country, but there’s a big difference here. This is not a place already created. This is a place being created, and the new young leadership is creating it.

Christopher B. Leinberger, the urbanologist, calls them “The Seinfeld Generation.” If they had a choice, all of them would flock to live in Brooklyn, which is why Brooklyn’s full now. Somebody’s got to live somewhere else.

What they have been doing here is this: They look around Dallas, they spot certain soft zones where property is still cheap but the architecture and the neighborhood look vaguely Brooklynesque, and they move in and immediately begin changing things. In effect, they are creating their own little Brooklyns all over town.

It’s messy. Sometimes it’s very messy. But in mess there is freedom. A few years ago a friend of mine and his wife were visited for the first time by my friend’s wealthy French-Vietnamese mother-in-law who lives in Paris. In showing Dallas to her, he inevitably had to drive down a long half-junky commercial strip where the property zoning classification must have been “Whatever.”

He noticed his mother-in-law smiling. He nudged his wife. She asked her mother in French what was so amusing. She shrugged and said, “It’s such a mess. It reminds me of Saigon. I love it.”

You may think that has got to be an acquired taste, but let me show you some of what’s going on beneath that surface at a deeper level culturally and politically. Right now we are engaged in an emblematic debate over the river that flows through the center of the city — the Trinity.

From the mid-20th century until right now, Dallas treated the Trinity as a sewer. A 20-year effort to build an expressway on top of it was just defeated last year by the new younger leadership.

The old guard, which is still very much with us, believes that, if we’re not going to cover up the river with a highway, we’ll have to cover it up with something else. They are moving as forcefully as they can to create a faux Central Park-like park along the river downtown.

But the Trinity, even where it is confined between massive earthen levees, is still a Western alluvial river that moves mountains of silt down its course during spring and fall monsoon seasons. The new younger leadership, much more in tune with nature and the environment than their elders, understands that putting an expensive fake Central Park on the river would be like putting an expensive silk tutu on a wild hog. First question: why?

The competing idea bubbling up from the new leadership is for something almost like a wilderness district along the river. In seminars and informal discussions around town people have been calling it “re-wilding the Trinity.” Ideally it would entail the creation of a habitat capable of luring wildlife and native flora back into the center of the city. 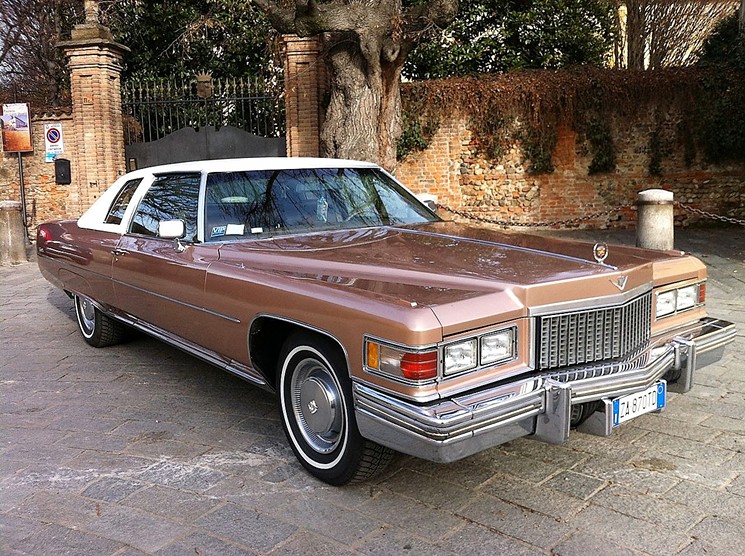 The new park the old guard wants to build on the Trinity is kind of like granddad's Caddie — in many ways a marvel to behold but not the kind of thing you want to have in your driveway forever.
ThatHartford Guy, Wikipedia
We are talking about thousands of acres along a distance of 20 miles through the heart of the city. And, yes, that’s a major undertaking. But that’s exactly the level of thinking and the scope of vision that the new young leadership brings to the table.

We’re not talking about merely improving the city. This isn’t a consolation prize for people who never made it to Brooklyn. What’s going on here is a ferociously determined pioneer-spirited campaign to build a new kind of city unlike any other.

If you were to come here — remember I said I wasn’t sure I wanted you — then your young employees would step into this process of creation and change just as it reaches full steam. In a matter of a very few years, maybe even sooner, the new demographic wave will elect its first mayor and put its first voting majorities on the City Council, the county commission and the school board.

When that happens, all kinds of wonderful mess and turmoil will ensue. Especially where public schools are concerned, for example, all of the old political labels will go straight into the recycling bin. An entirely new form of community-based educational system will be created out of the junk and ashes of the old one.

Don’t ask me what it will look like. Nobody has any idea yet, but I can guarantee you one thing: It will work. Perhaps because they don’t feel bound or indebted to old banners and causes, the new wave so far has been notably pragmatic. They do what they think will work.

You obviously have figured out already the thing about surrounding areas, which I suspect are a lot the same whether they surround Dallas, Atlanta or even D.C. out far enough. Surrounding areas in America right now are refuges for people who don’t like cities. Some of their dislike is basically benign and based on a like for something else, like horses, and some other of it may be absolutely crazy, Trumpaloid, wang-dang-doodle, Tea Partyesque, social psychosis.

The point is that the whole country is sorting itself out somehow, and so is Dallas. The new wave gathering itself in the core of the city defies a simple liberal/conservative definition by being so pragmatic and so new. But it definitely is diverse and likes being that way. It is urban. It seems to be putting down roots that already can withstand the erosive force of child-bearing.


If the city has to agree to rename itself Amazonville and pay taxes to you instead of you paying taxes to the city, then, no, not so much.

The ideological doodles, who tend to dwell on the geographic fringes of the city, will all doodle on out into the boondocks soon enough. When I talk about the old guard in Dallas, meanwhile, I am not talking about the doodles. I am talking about old families and old business interests who have always run things in the city in part because they thought it was their job.

Those entities are not immune to the same generational change sweeping the rest of the city, and the tension between the old and new guards will resolve once the city sees a few more important funerals. In the interim, maybe we wind up with a park we wish we didn’t have to deal with, sort of like a 1975 Cadillac Coupe de Ville at the back of the driveway sitting on four white-walled flat tires. Nature will take care of that problem for us soon enough.

I started by expressing misgivings about your coming here, and that, also, has a bit to do with the old guard. I don’t want to see the city give away the store to you, just to get you to come, and do it in ways that would cripple the city. I’m afraid it would be in the character and M.O. of the old guard to do just that. They often operate out of a mid-20th century mentality that is half boosterism, half inferiority complex, willing to sell their first-born sons if it will “put this town on the map.”

If there is some way you can come here and fit yourselves into that more organic mode, then, yes, Dallas would be an exciting and rewarding place for you to build your new not-the-real-headquarters. And Dallas would welcome you.

If it has to be the other way around, if the city has to agree to rename itself Amazonville and pay taxes to you instead of you paying taxes to the city, then, no, not so much. That kind of relocation deal probably would not sit well with the people who are going to be running this place in a couple years. That would be like another old Cadillac parked down by the river — not destined to stay there for long.

By the way, no one here listens to me. Should have mentioned that at the top. My bad.