Former Dallas Mayor Ron Kirk, like contender Eric Johnson, was brought forward almost entirely by the city's elite white business leadership. United Nations Mission of Geneva
In 1995, somebody in the business leadership of Dallas figured out that Dallas had a serious amount of catch-up to do to be a contender on the larger stage of history. The answer, brought forward by the city’s business elite, was the city’s first black mayor, a brilliant young lawyer named Ron Kirk.

Now in next month’s mayoral runoff election, we are looking at a kind of reprise of that strategy, only I would argue, sadly, that the motives this time around are the opposite of what they were almost a quarter-century ago.

Kirk was a graduate of small, bookish Austin College in Sherman and the highly competitive law school at the University of Texas. He was a Democrat, but nobody’s perfect.

Eric Johnson, also a Democrat, cinched a spot in the June 8 mayoral runoff election Saturday by squeaking into first place a little less than two points ahead of outgoing City Council member Scott Griggs. In terms of his academic background, Johnson, a state representative since 2010, makes Kirk look like … well, me, maybe. Johnson, who is black and grew up in West Dallas, is a graduate of Harvard with a law degree from Penn and a master’s degree from Princeton. (OK, Kirk still looks better than me.)

Griggs, who is white, managed to give Johnson a close shave even though Griggs ran on a fraction of Johnson’s money, most of it from relatively grassroots sources. Johnson’s support, meanwhile, came heavily from the city’s old business elite, and therein lies our story.

This time around, the business leadership clearly is not promoting a young black mayor to achieve progress. Griggs is progress. The old leadership, dominated by landowners and real estate developers, hears its own death knell in the kind of progress that Griggs represents. And, yeah, they’re sort of right, if not entirely.

This new sensibility thinks catastrophically expensive branding projects and buildings that turn to crap in 15 years are not just idiotic but maybe even criminal in world that’s about to burn to a cinder.

The new young urban place-making culture from which Griggs springs is not antidevelopment. North Oak Cliff, East Dallas and Uptown, where that culture has taken deepest root, are among the city’s most desirable and successful development zones, often with the help of leaders like Griggs.

But then, we all know that there’s development and then there’s development. The old guard’s development style has always been stiff-armed and stick-built without much love for or understanding of the urban environment. We’re talking about Kleenex-box apartments and big box retail, all of it stuffed into fragile neighborhoods like infrastructure time bombs.

According to the new counter-ethos, all of that old-style development, often juiced up with big property-tax breaks, is a pricing scam, a fraud on the taxpayers and a cancer on the community. It not only does not pay its own way when it’s new, but it becomes a huge communal liability as soon as it’s old, which is soon.

In 15 years when a three-story four-plex built with two-by-fours is already old and all of its curbs and sewers need fixing or replacing, the people who built it are gone. They pulled out the profits at the front end and vamoosed to Palm Springs long ago. Now the rents are down so low that the place couldn’t generate enough taxes to pay for a new stop sign, and, by the way, somebody needs to call 911 again.

The same leadership that thinks this kind of development is what’s meant by “building the tax base” has another supposedly offsetting philosophy, equally unsustainable, having to do with prestige. OK, they say, so the kind of development we do may turn to junk in 15 years and corrode the surrounding communities. That’s OK, because we have this other countervailing strategy called really big art projects.

I’m going to write about this again Wednesday, based on a fascinating conversation I had last week with landscape architect Kevin Sloan and some reading he told me to do. In particular Sloan told me to watch a documentary on the New York art industry released last year called The Price of Everything, directed by Nathaniel Kahn. It was a big lightbulb moment for me.

I’m very unsophisticated. The whole thing in Dallas with these so-called “signature projects” has always been a mystery to me. I always figured it’s Dallas, so why would we have a kayak rapids? Why would we have suspension bridges when we don’t have a valley? I never got the why. Now at least I have an inkling.

But there’s a much more fundamental issue in play than mere branding strategies. A new caucus on the City Council, led by Griggs, speaks for a whole new culture in the city made up mainly of people under 50. This new sensibility thinks catastrophically expensive branding projects and buildings that turn to crap in 15 years are not just idiotic but maybe even criminal in a world that’s about to burn to a cinder. 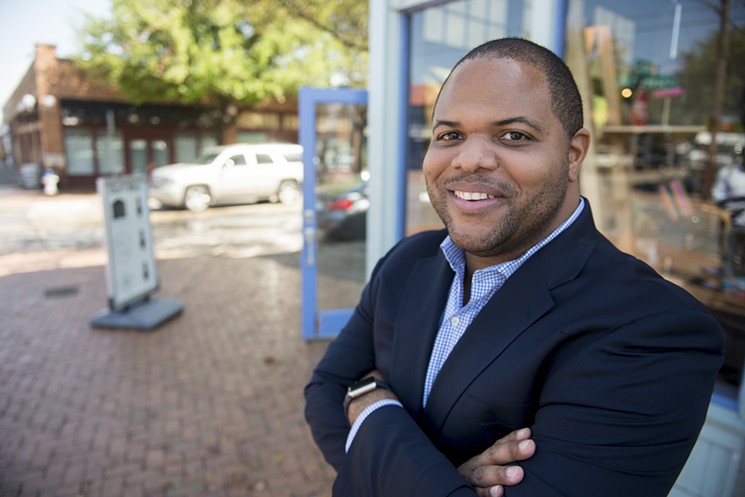 State Rep. Eric Johnson
Brian Maschino
That’s the whole thing. The idea that humans are smarter than nature, that we can build anything with enough concrete and money, that the highest achievement possible is media glitz, all of that lies at the heart of and is what drives the burning of the planet, the annihilation of life. It is the why.


In a city at the precipice of generational change, there will be nothing unifying or healing about carrying water for the people whose main mission is to resist the change.

But it’s also an unbridgeable divide. An entire generational army is bonded at the heart to exploitation and consumerism. That’s why they look at the icebergs melting and say this will be great for surfing. To admit they’re wrong about the stick-built apartments is to admit they are wrong about the meaning of life, so they’re not going to admit anything, ever, not at gunpoint.

Why suddenly at the last minute before the filing deadline for mayor did the A-list of old Dallas business types push Eric Johnson into this race? Like Kirk before him, Johnson has campaigned so far on a platform of unification. The assertion is that Griggs, because he opposes the old style of development, is a divisive force, but Johnson, for reasons implied but never quite explicit, will be a unifying force and a healer of wounds.

To examine that premise responsibly, we need to look back carefully on the Kirk legacy. He was mayor for seven years, from 1995 to 2002. During that entire tenure, Kirk’s main goal and insistent campaign was the building of the so-called Trinity toll road, a failed highway project along the river through downtown. The Trinity toll road was more divisive and more wasteful than any other of the many failed public works projects of the old guard. In fact, it’s impossible to name anything more divisive in the city’s history in the last quarter-century.

The toll road was marketed with a strategy plucked right up out of the rags of Jim Crow: The rich white people who wanted to see the road built reached across the river and did a deal with the rulers of segregated southern Dallas. Together they were supposed to make an end-run around the city’s sane middle class, with the city’s first black mayor working to help make it happen. That strategy failed in the end, but it took decades.

I don’t think any of that detracts from the brilliance or the personal integrity of Ron Kirk. He saw the toll road as a great thing. It’s that simple. So did a lot of people. They just happened to be wrong.

In one sense, the toll road was a great thing, because opposition to it became a magnetic field that gathered in and focused the new culture and politics of the city. The toll road debate was never only about the toll road. It was always about the two different ways of viewing the city and the world – the arrogant man-made way and the more modest, sustainable, livable way.

So, yes, as people have already been saying since Johnson took first place Saturday and earned a slot in the June 8 runoff against Griggs, Johnson is the new Kirk. He is the second young black candidate for mayor of Dallas in a quarter-century brought forward almost entirely by the white business elite.

I think the business leadership promoted Kirk’s candidacy because they sincerely hoped Kirk would help move the city forward, especially on race. In that regard his tenure may have been a modest success. But we need to look hard at the total legacy of Kirk’s tenure.

In a city at the precipice of generational change, there will be nothing unifying or healing about carrying water for the people whose main mission is to resist the change. In this next month, there will be many small tells and signs of what Johnson would do as mayor. I don’t know that anybody outside a small circle of City Hall wonks will spot them or care. For example, if he waffles or evades on the fake Central Park that the old guard still wants to build now on the river downtown — their latest art project — some of us will wink and say, “Yup, he really is the new Ron Kirk.” And I guess that may be enough to make other people vote for him.
KEEP THE DALLAS OBSERVER FREE... Since we started the Dallas Observer, it has been defined as the free, independent voice of Dallas, and we'd like to keep it that way. With local media under siege, it's more important than ever for us to rally support behind funding our local journalism. You can help by participating in our "I Support" program, allowing us to keep offering readers access to our incisive coverage of local news, food and culture with no paywalls.
Make a one-time donation today for as little as $1.