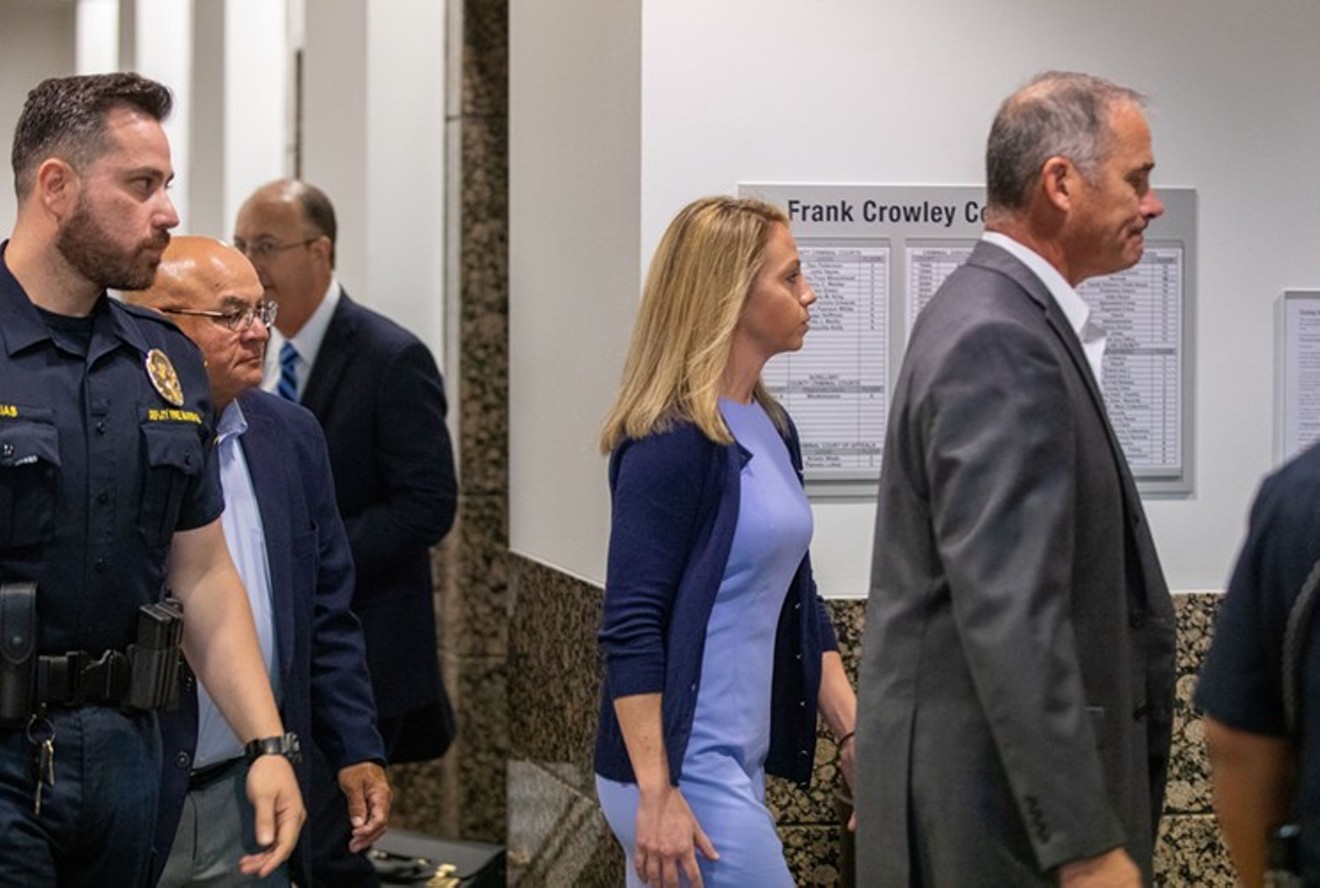 Former Dallas police officer Amber Guyger, 31, shot and killed 26-year-old accountant Botham Jean, mistaking his apartment for her own. Nathan Hunsinger
Through the dark clouds brooding over the Amber Guyger trial, sunlight actually broke through in a few wonderful moments, some now internationally publicized, some you may have missed. Let me give you an example of one that may have gotten by you.

Right after the sentencing, Dallas Police Chief U. Renee Hall gave a press conference that was … well, I can’t find another word … brilliant. She was poised. She had a great command presence. Not just her words but her eyes and presence. Everything about her preached calm.

But here was the part that especially caught my eye, I guess because I’m a journalist. I hope this isn’t too inside. In answer to several vague, unfocused questions from reporters, Chief Hall asked the questioners to be more specific. And, of course, they couldn’t, because you only ask a vague, unfocused question if you have no idea what’s going on.

In a Dallas media scrum like that, you’re always going to have a few seasoned pros, usually the people from the daily and some salty dog TV reporters like Ken Kalthoff from NBC5, Rebecca Lopez at WFAA Channel 8, Shaun Rabb at Fox4, probably some others I’m leaving out (apologies). If they ask a question, they’ve already got the background, and they know what they’re talking about.

But the child reporters who get shipped all over town all day long like pingpong balls usually haven’t been around long enough to know anything about anything. So they ask public officials questions that mean, “Please start talking so I can get a quote to take back to the studio.”

I think one of them for Hall was something like, “What about Mike Mata?” Mata is president of the DPD's largest police union. I’ll come back to him in a second.

Hall finally showed us her stuff as a leader in this terribly difficult moment.

Many public officials take that bait. Unsure what the question is about, they’re unsure what to say, but they wade into that swamp anyway, and it is a perilous swamp, indeed. The rule should be never to start talking in front of TV cameras until you’re sure what you’re supposed to be talking about.

Hall didn’t bite. She politely asked the reporters to be more specific, and the sound I heard in response was something like water bubbles in a jug.

Hall finally showed us her stuff as a leader in this terribly difficult moment. She did it again Tuesday night when a brawl broke out at the first meeting of the Dallas Community Police Oversight Board, where she was present. Sometimes really bad things can bring out good things, and these last few painful weeks have brought out the best in Hall.

At some point we also need to pause and look back on all of the recriminations and accusations launched against Dallas County District Attorney John Creuzot in this matter. Somebody needs to acknowledge that Creuzot turned out to be exactly right.

He said at the very beginning that when somebody points a gun at somebody, pulls the trigger and shoots, the charge is murder. And the jury decides.

Creuzot is a former prosecutor, a former criminal court judge and nationally respected authority on cutting-edge issues in the law including restorative justice. But for months, the editorial page of The Dallas Morning News treated him like a doofus.

The paper said Creuzot should have gone for a manslaughter charge against Guyger. The editorial page thought it would have been easier to win a guilty verdict on manslaughter, pretty much ignoring whether the facts in the Guyger case met the legal standard for manslaughter. Creuzot said the facts did not match manslaughter.

He stuck with murder. He won. I believe that means the editorial page lost. That’s what I see up on that big scoreboard in the sky anyway.

Creuzot faces a contempt hearing for violating the judge’s gag order. He gave a reporter a quote about his decision to go for murder. I bet 25 cents that comes to nothing.

Creuzot spoke only about his own official action as an elected official. It’s hard to imagine how a judge could order an elected member of the executive branch not to speak about his own official actions. We’ll see. But for now, the bright spot here is that Creuzot made the right call, according to the outcome. We have a DA who knows what he’s doing.

This next one is a big choker for me. I’m trying to spit it out, but I might need somebody to come do the Heimlich maneuver on me.

Mike Mata, president of the Dallas Police Association, is under fire for his behavior following the Amber Guyger shooting.
Jim Schutze
Eric Johnson. He was not my choice for mayor. I still have issues with his leadership style, which may come down to the fact that he was not my choice for mayor. Whatever. I never said I was Mr. Sportsmanship. But I have this much to say. His handling of the Guyger trial and its outcome was probably pretty much spot-on perfect.


Somebody needs to acknowledge that Creuzot turned out to be exactly right.

He didn’t fly straight into it like a big limelight moth. He kept a distance. He stayed cool. In the few instances I know of where he spoke, once in a tweet, another in some kind of official statement, the mayor’s voice was calm, cool and collected. That stuff works.

Especially after a witness in the Guyger trial, Joshua Brown, was killed in an alleged drug shootout, things went totally crazy. Lee Merritt, a civil attorney representing victim Botham Jean's family in a lawsuit against the city, rushed online with a false narrative, wrongly claiming Brown had been shot “in the mouth” and that this was “a message.”

Presidential candidates Beto O’Rourke and Julian Castro and the National NAACP leaped to Merritt’s side, demanding an “outside” investigation, meaning not by the Dallas Police Department.

But Mayor Johnson tweeted: “I trust the Dallas Police Department will conduct a thorough investigation into the death of Joshua Brown. Until we know more about this incident, I encourage everyone to refrain from speculation.”

Within 24 hours, the DPD had rolled it up. They reported that Brown had died in an exchange of gunfire with three drug customers. Police found 12 pounds of marijuana, 143 grams of THC cartridges and $4,000 in cash in Brown's apartment. They had two suspects in custody and a warrant out for a third.

I’m looking at that scoreboard in the sky again. I see a win for the mayor and a big goose egg for Beto O’Rourke, Julian Castro, the National NAACP and Lee Merritt.

After the trial, the Lee Merritt crowd was calling for the firing of Mike Mata, president of the Dallas Police Association. Their claim was that Mata had wrongly impeded the investigation of Guyger on the night of the murder of Botham Jean by turning off a recording device in a patrol car where Guyger was on the phone with the union’s lawyer.

I know this is hard for a lot of people to grasp in a town where so many people don’t understand what unions are, but Mata was doing exactly what he was supposed to do to protect his union member, Guyger. Had he allowed a police recording of her conversation with her union rep moments after the shooting, then he really should have been canned as head of the DPA if not from the force.

Mata said he’s not going anywhere. Good for him. The chief said the accusations against Mata will be investigated. If this were my own parlay card, I would definitely pick Mata as the winner.

And what about the jury in the Guyger trial? My own reading of it, based in part on the two jurors who have spoken, is that they were dead set from the beginning of their deliberations on finding Guyger guilty of something. She shot the guy. I think they thought there had to be accountability.

None of the evidence in the trial proved that Guyger’s arrival that night at Jean’s door was anything but a terrible mistake. None of Guyger’s own testimony, none of her deportment, nothing about her lent credence to the state’s portrayal of her as a vicious racist assassin. The law provided the jury with a clear path to acquittal in the legal doctrine of mistake of fact. But they found her guilty of murder.

The ancient wisdom of the jury system is that it plumbs deeper than the law books. The jury system empowers ordinary citizens who are not lawyers or judges to reach into their own hearts and common sense for an outcome. I think that’s what happened here, and I don’t believe we should question it.

Nor do I believe that Amber Guyger questions it. Obviously I can’t know this. I have never spoken to her. But let’s remember something from those heart-rending final images from the trial. Amber Guyger rushed into the arms of the brother of the man she had killed and hugged him for almost a minute. She asked the judge for a hug and accepted a Bible from her (shame, shame on the people who jumped the judge for this wonderful gesture of compassion).

Guyger’s behavior at the end of the trial was not the behavior of some twisted Nazi racist. It was the behavior of a woman of feeling who knew she had taken a life that should not have been taken. Was the verdict the right one legally? It’s what the jury found. That’s all we can know.

In the years ahead, if one thing can save Guyger’s life from bitter darkness, it will be her remorse. Given everything else that she has lost, one would hate to take that away from her.

This city has problems. You want a list, come here. I am Problems ‘R Us. But this is a great city. Guyger could come back here when she gets out. Botham Jean’s brother could come here when he finishes his education. They both could come here and do good — good for themselves, good for the city. Look around us. It’s what people here do.
KEEP THE DALLAS OBSERVER FREE... Since we started the Dallas Observer, it has been defined as the free, independent voice of Dallas, and we'd like to keep it that way. With local media under siege, it's more important than ever for us to rally support behind funding our local journalism. You can help by participating in our "I Support" program, allowing us to keep offering readers access to our incisive coverage of local news, food and culture with no paywalls.
Make a one-time donation today for as little as $1.