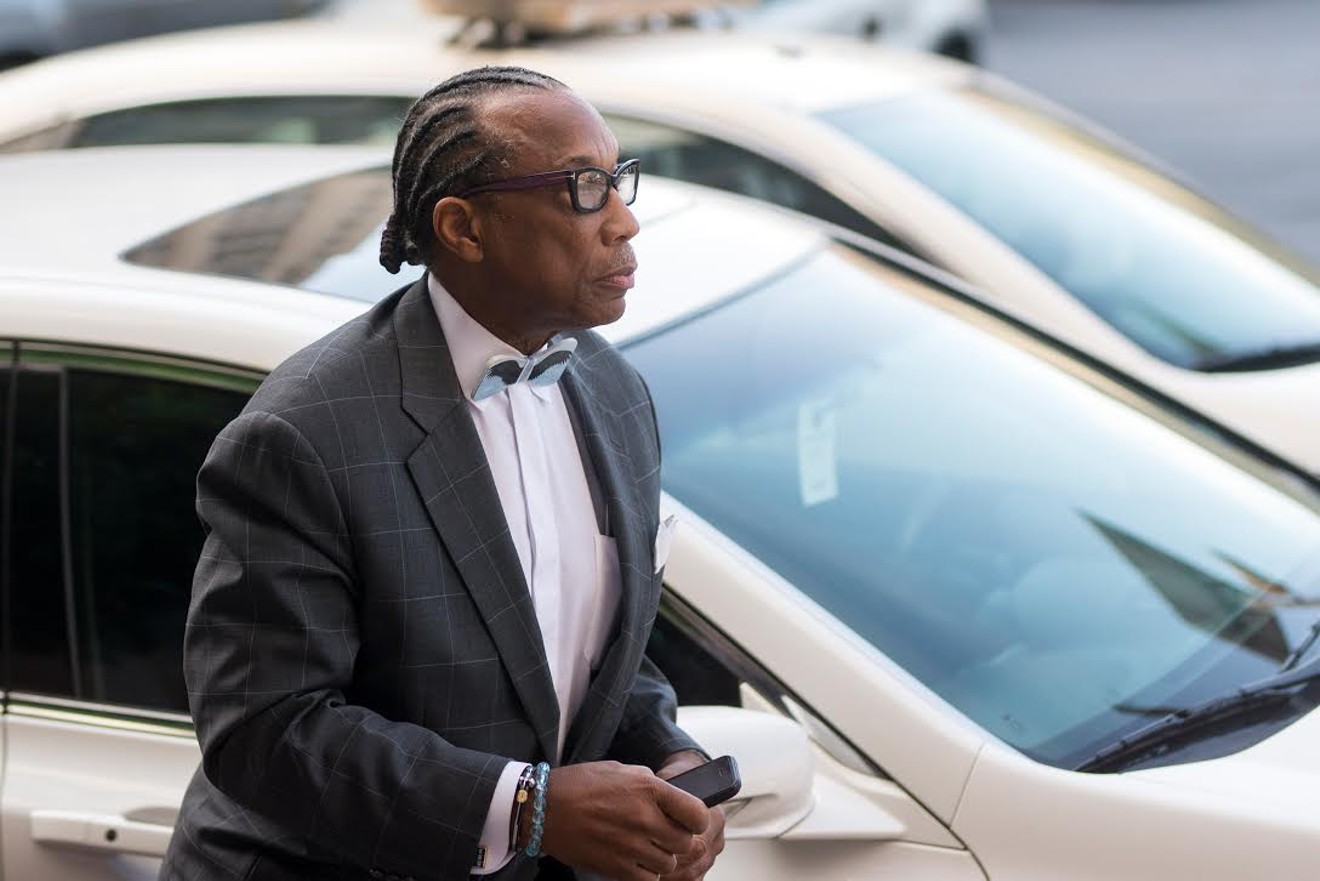 Dallas County Commissioner John Wiley Price walked, because after eight days of deliberation the jury still had at least reasonable doubt he was guilty. Brian Maschino
In fields other than journalism, people use the term, “Monday-morning quarterbacking,” as if it’s a bad thing. In our business it’s bread and butter. So I don’t blame any of my colleagues for second-guessing the performances of the two opposing legal teams in the recently concluded federal corruption trial of Dallas County Commissioner John Wiley Price.

I’m just not sure I agree. I see people saying that the defense team, who won, did a brilliant job, and they did. But then some observers feel compelled to go on and say the government lawyers who argued the case to the jury and lost must have done a terrible job. I’m not so sure.

Price, who is Dallas’ longest-serving and highest-profile black elected official, was acquitted on seven counts of bribery and fraud at the end of a seven-week trial, following eight full days of jury deliberations. The jury dead-locked on four tax evasion charges.

Some minor witnesses testified against Price and his co-defendant, Dapheny Fain, who is his longtime administrative assistant. But nobody central to the alleged plot testified for the prosecution.

So that left the government lawyers with an Accounting 101 case. And there, the government’s main problem was way too much accounting. Even to get to court they had first to dredge back through evidence gathered by the FBI and IRS in more than a decade of investigation – a total amount of information described in the trial as amounting to eight terabytes of data. According to Yahoo Answers, that would be the equivalent of a Microsoft Word document 690 million pages long.

Check me on this, but I think if 100 accountants were to examine 100 pages of that evidence all day every day including Saturdays and Sundays, it would take them almost 190 years to get through the whole pile, and in that amount of time who knows what else might have happened? We might all be speaking Russian, and probably by then everybody will be offering to testify against everybody else anyway for a hamburger. They won’t even need trials anymore, just hamburgers.

The feds had to reach into that mass of evidence and pull out of it the elements they needed to paint a certain picture for the jury. Day after day, government witnesses and lawyers stitched together a pattern of transactions designed to prove that Fain, Price's political consultant Kathy Nealy and other parties were channeling money, cars, clothes, hair-styling and land to Price in order to buy his vote on the county commission.

Some of the evidence was compelling – checks and checkbook entries, in particular – and some of seemed like a reach, notably the hair-styling. But the government lawyers did it. It took time and was monotonous, but in long weeks of testimony the lawyers for the government – Walt M. Junker, Katherine Miller and J. Nicholas Bunch – succeeded in putting together the narrative they needed.

Listen, I watched that jury for some of the most boring testimony, and I was looking at two rows of people with their eyes and ears wide open, several of them taking notes. You have to think about the different ways different people in the courtroom pay attention.

Sure, we in the media want drama. First, it’s easy to write drama. Second, drama is how they do it on TV. The most dramatic lawyer almost always wins on TV, especially if he is also the best looking lawyer, double especially if he is the one the judge badly wants to have an affair with but won’t let herself because of her devotion to the law and also to her sick child. But I don’t think that’s what juries are looking for necessarily.

The jury is stuck in this terrible place called real life. They know that at the end of the proceedings they have to go to a room and decide whether or not to take someone’s freedom away. For many, that may be the single most difficult decision they’ve ever made in their lives about a non-family member. What they want is any and all information that will help them make that decision and feel good about it, maybe the more boring the better.

In this case, all of the defense team did brilliant work. Marlo P. Cadeddu, an international banker before turning to the law, picked apart the government’s transactions with surgical precision, showing the jury that what the government claimed were bribes could just as easily have been legitimate loan repayments. She was helped in that endeavor by a team of volunteer law students.

Christopher Monroe Knox accomplished what was either a miracle or a magic trick by which he seemed to know more about what was in the eight terabyte mountain of government evidence than the government knew. Knox had a keen nose for things that were missing – evidence he knew or suspected the government possessed but had failed to turn over as required by law – and that instinct enabled him repeatedly to catch government lawyers flat-footed.

Tom Mills was the defense team’s silver fox. Courtly, wily, deadly on cross-examination, Mills is the proverbial iron fist in a silk glove.

Shirley Baccus-Lobel defeated the government’s attempt to paint Price as a cold-blooded con-man, effectively conveying with her own emotion that her client was a warm-blooded human being. They were a tough team to beat.

And then there was the other thing – the fundamental weakness of the government’s case. I talk to people all the time who know about only one thing in the whole eight terabytes – that the government broke into the safe in Price’s home and found almost $230,000 in cash. People say to me, “Oh, c’mon, where does a guy working for the county all his life get $230,000 in cash, and why does he keep it in a safe in his house?”

Before this saga passes entirely from public attention, I would like to take this occasion to speak for all of my colleagues in the media and give you the honest answer you deserve. We have no idea.

I know, I know. We showed you the raid in an endless loop on TV for years, and I think somebody on TV even stacked up what was supposed to be that much money and took a picture of it. I bet it was only $600 in bills stuck to the outside of a big bag of flour. Defense lawyer Tom Mills was the iron fist in a silk glove for the defense team.
Brian Maschino
I know we all did drama on the money-in-the-safe story. But we have no idea where that money came from. Price is a hard-bargaining trader in cars, art and houses. He could have made it honestly. It could have been illicit. Why did he keep it in a safe in his house? Who knows? People are weird.

This jury heard seven weeks of testimony and then spent eight days going back over that testimony, and they walked him. That would not have happened had the jury believed the cash in Price’s safe was saved-up bribe money. It comes to that: The jury didn’t believe the government had proved its case beyond a reasonable doubt.

The government didn’t put someone in the witness chair who had been at the center of the alleged bribery scheme, preferably the bribe payer, and have that person tell the jury how the cow ate the cabbage. The government lawyers trying the case couldn’t do that, because in 10 years of trying the FBI and the IRS had failed to come up with such a witness. The lawyers’ job was to do the best with what they had.

I don’t think I ever saw the government lawyers doing a bad job. They all seemed meticulous and effective when I was watching.


In evaluating that job, think about those long days of jury deliberation. The defense had presented almost no evidence. The jury was in that room for that long because they were working their way through things the government had shown them. Whatever else that says, it tells me they took the government’s case seriously.

I was in and out of the actual courtroom and the annex media courtroom infrequently. Maybe I missed something. But I don’t think I ever saw the government lawyers doing a bad job. They all seemed meticulous and effective when I was watching. Yes, they had a kind of dull checkbook-balancing case to make, but if I had been on the jury I wouldn’t have wanted them to get all drama-queen on me about that. In my life, checkbooks are their own drama.

There is an overarching question here about the government’s decision to go to trial with this case. Having failed to flip Fain, Nealy or any of the rich white check-writers who paid money to Nealy for her influence over Price, why didn’t the feds stay home? Isn’t a forfeit better than a high-profile loss?

Nobody knows how the feds make those decisions, and the feds don’t talk. But it seems very unlikely that in this case a decision about green-lighting a case this big against a high-profile politician was made at the level of the three federal trial lawyers who wound up in the courtroom.

Their immediate boss, current U.S. Attorney for the Northern District of Texas John R. Parker, is not a presidential appointee but an interim, serving only until a permanent appointment is made. It seems unlikely that he, as an interim, made this call on his own. This feels like a decision that at least had to be approved in Washington and probably came straight down from there.

At that point, the government lawyers who drew the black bean and had to take this case to court were in the position defense lawyers find themselves in a lot – stuck with the client, the case and the evidence they were handed.

If the jury had tipped the other way and voted to convict, we’d all be Monday-morning quarterbacking it now to say how methodical and relentless the government had been and how scatterbrained the defense was. That’s just how we are. We like to bet on games after they’re over.