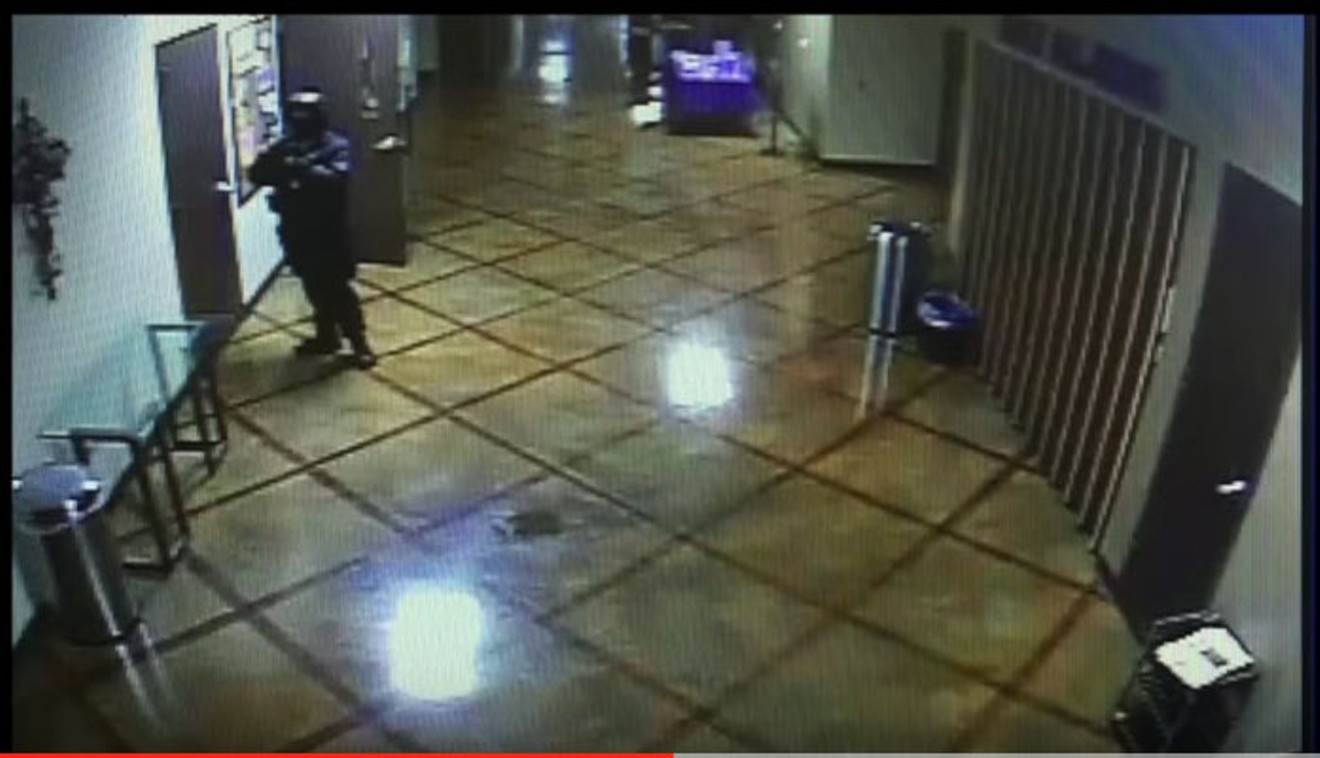 A still from the Creekside Church surveillance video. Courtesy Midlothian Police Department
The killer slowly walks through the halls of the Creekside Church of Christ in Midlothian. The figure is wearing police tactical gear and holding what appears to be some sort of hammer. It’s just after 4 a.m. and the church is empty, allowing the intruder to walk through the halls seemingly without care, opening and closing doors as if he were searching for someone or something.

A small-town Texas girl from Jacksboro, Bevers, 45, now lives in the slightly larger town of Red Oak, south of Dallas. She works as a fitness trainer for Camp Gladiator, a national fitness movement appearing in churches, parking lots and football fields across North Texas. She originally planned to host her fitness boot camp in the Creekside Church’s parking lot, but an April rain shower has forced her to teach her class inside.

“If it’s raining we’re still training,” she wrote on Facebook the night before her murder.

At a distance, the killer looks like a legitimate SWAT officer preparing to face protesters or capture a suspect barricaded inside a home. The church has surveillance cameras but the video doesn’t help identify the killer — the gear obscures the face and even the person’s gender. Midlothian police will later report in a search warrant that in “certain portions of the footage the suspect appears to have what has been described as a feminine sway or walk. The footage also indicates that the suspect has a distinct walk that is indicative of some type of injury which affects the right leg/foot.” The killer also appears to use a wall to remain steady. The video indicates that the killer is a little on the heavy side and stands between 5-foot-2 and 5-foot-7.

At 5 a.m., Camp Gladiator exercise students arrive at the church and discover Bevers’ body. There are multiple puncture wounds to her head and chest. A justice of the peace declares her dead shortly after police arrive. Midlothian police have not disclosed where the killer encountered Bevers inside the church but have told media that nothing has been reported taken from the church.

Police sought to question the driver of a 2010 to 2012 model Nissan Altima that appeared in surveillance footage from SWFA Outdoors, a hunting and fishing store a mile down the road from the church, in the early morning hours before Bevers' murder. Police tell local news outlets that they don’t believe the car is connected to the murder but simply wanted to speak with the driver.

Nearly a year has passed, and police investigators seem to be no closer to finding the killer. The local police have sought help from the FBI and Texas Rangers but the case remains cold. A legion of investigators, unasked, have been probing the case via Facebook groups dedicated to solving Bevers' murder: Case Crackers: Who Killed Missy Bevers, Justice for Missy Bevers, Let’s Catch Missy Bevers Killer, Missy Bevers — Unfiltered and Uncensored. The groups’ memberships range from 50 to 1,100 citizen investigators who are dissecting the case nearly every day. There, theories swirl: Love triangles gone awry, a jealous husband with an enraged father, a gas station attendant with a “checkered past.”

In efforts to help police — or snag the $50,000 reward money — amateur internet investigators following Missy Bevers’ case have analyzed search warrants and still images of the killer in makeshift tactical gear. Some dissected the outdoor store surveillance video, pointing out that the driver’s seat is pushed too far back for the killer and that the Nissan may have been flashing its headlights at someone. Police have yet to mention an accomplice. Others have gone so far as running background checks, trolling social media sites of friends and family and approaching Missy Bevers’ family and friends for information. They use acronyms to discuss and debate guilt or innocence as if they’re playing a game of Clue.

These musings have crossed the social media threshold and into the real world, wreaking havoc on people’s lives and, in some cases, wasting man-hours as police track down false leads. The police seem exasperated. “They need to remember that these are people with families,” Midlothian Assistant Police Chief Kevin Johnson tells the Observer. “Just because we’re following up on a tip and talking with someone doesn’t mean they’re guilty.”
Anytime the police speak to someone, often called a “person of interest” in the case, that person becomes a target for conjecture.
“People were sharing my address. ...” says one former person of interest who wishes to remain anonymous. “These people have no clue to who I am and [are] jumping on the bandwagon. They could gather everyone on Facebook groups into an auditorium and tell them the truth, but they don’t want the truth. They just want to crucify somebody.” 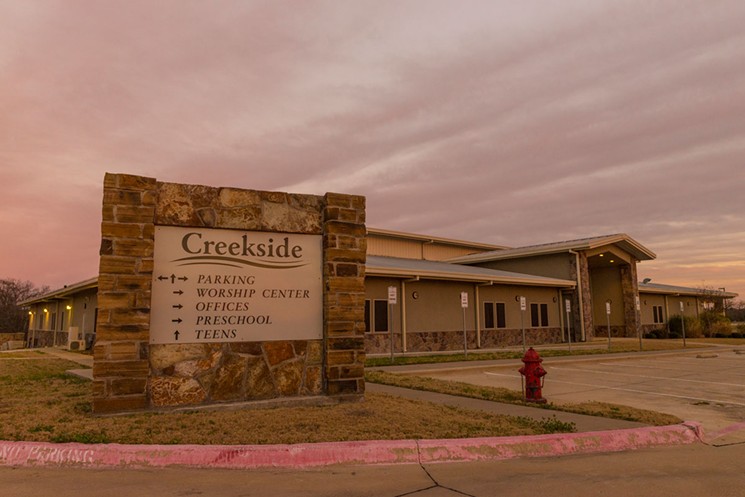 Creekside Church of Christ, where Missy Bevers was murdered early morning on April 18, 2016.
Danny Fulgencio
Creekside Church of Christ in Midlothian is locked up tight like a bank after hours shortly after noon on a Sunday in late January. The Sunday morning church service just ended, and people are leaving in small groups into the large parking lot and off to one of the Sunday brunch spots. They move fast, hoping to beat the rush of churchgoers from more than a dozen other churches located around the small town.

Stan Moore, a 64-year-old church elder, seems nervous to discuss the last year’s murder case. His hand trembles as he speaks. “What we have decided to do as a church is to stay out of all that,” Moore says. “The police investigators are doing their jobs. But we’re saying, let them do what they need to do. Let’s not get in their way.” Moore says the church has taken extra precautions but doesn’t want to delve into exactly what steps they’ve taken.

April Sandoval is also worried that the killer is still out there. After her Sunday morning church service at another church in Midlothian finished, she meets with other friends that she made from the Missy Bevers Facebook groups who are sending out what they call a “tweet storm” to raise awareness with media outlets and others that Bevers’ killer still hasn’t been caught.

She hadn’t heard much out of social media since the detective sent the email clearing her. In August 2016, someone sent her all the supposed evidence that had been gathered against her by social media sleuths. But the furor of what occurred had faded into memory until a couple of weeks ago.

Sandoval says she received a screenshot of an email from Aguero to a detective whose name had been blotted out. “On a similar note, I did make contact with the girl that worked with April for a time over the summer,” she wrote in the Dec. 26, 2016, email. “We messaged back and forth and she’s now downplaying the very things that, according to her, were very significant when she brought them up a few months ago. And she doesn’t seem at all willing to speak with law enforcement.”

She couldn’t figure out why Aguero was discussing her again after a detective claimed she’d been cleared. Aguero says the detective asked her for her files and claimed her new theory about the killer didn’t involve Sandoval. Police won’t verify if a detective reached out to her for her files. Sandoval says she contacted police about Aguero, and Detective Cody Moon replied in message to save everything to back up Sandoval's claim of harassment. So she sent him the screenshot of the email where her name first appeared.

This wasn’t the first time she reached out to police about social media sleuths targeting her as the possible killer on Facebook. The last detective told her, “Stay off it.” But it was hard to ignore the urge to defend herself online.

That's the reason why she says she shared Moon’s email online, to prove that she was indeed talking with police about Aguero. Moon somehow found out and responded, “Do you want my help? You called for our help, correct? Why do you think posting my email to social media is helping? That seems more like stirring the pot and adding fuel to the fire. I am more than willing to help you but will not tolerate the drama and antagonizing.”

“I will see what I can do about getting her to stop the slander,” Moon wrote. “I am not in contact with her; another investigator is. The bad thing is there isn’t much we can do about social media. People can say whatever they want about whomever they want nowadays. I would still like to meet with you so let me know a date and time when you could get child care please.

“In the meantime try to ignore it,” he added. “Don’t play into the trash talking on social media. It has put a damper on this investigation and caused headaches for us. At the end of the day I have three precious girls who have lost their mother, but the only thing everyone on social media cares about is getting their opinion out there and arguing.”

“But what about my kids?” Sandoval now asks.

She hasn’t met with Moon yet. She says she doesn’t have time to meet with him without her kids because she works until the late afternoon, then has to pick up her kids from day care. She can’t ask her parents to watch them. She offered for Moon to come by the gas station to chat, though it is hard to find privacy at a gas station when customers seem to flow in and out.

Standing in front of the Midlothian Police Department, the assistant police chief reiterated that Sandoval is not a suspect, that they don’t have a suspect. They still don’t know if the masked killer in the makeshift SWAT gear was a man or a woman. They’re simply retracing their steps in investigation, going over facts and searching for new ones to see if they can find that “innocuous piece of evidence.”

“I feel like I need to get an attorney,” Sandoval says.