District 14 Council Candidate Matt Wood Swears He’s Against the Trinity Toll Road, Believe It or Not 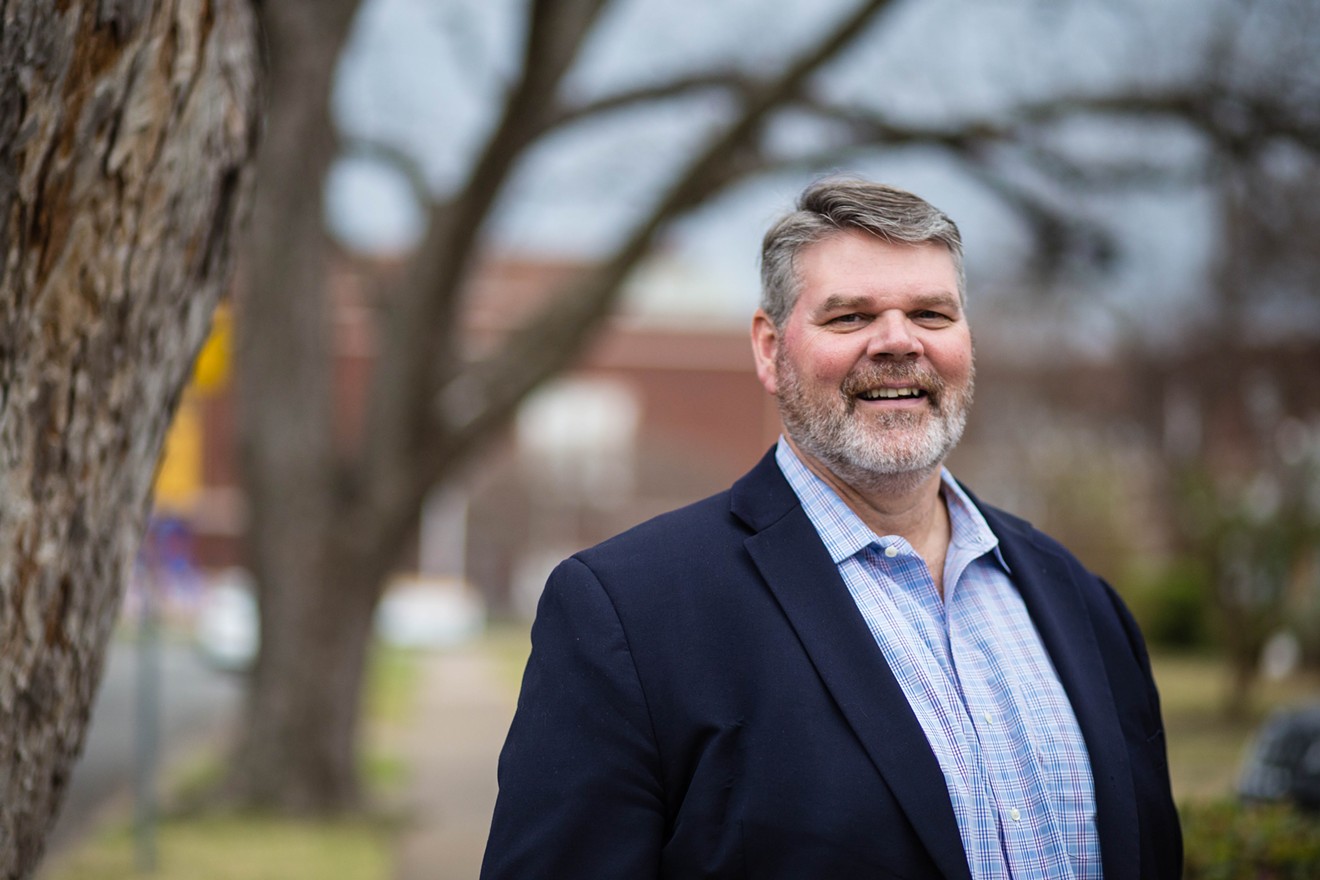 Matt Wood is not a Manchurian candidate. Mark Melton
Now the May 6 City Council elections are barely a month away, and it’s time to start looking for the weird stuff. As usual, nothing is ever weirder than District 14 in East Dallas.

For decades East Dallas has been the city’s most politically volatile region, sort of like an all-cousin town in East Texas. People just know too much about each other.

It's like Jane May Jones walks downtown wearing a red hat, and everybody’s immediately out on their porches and up in arms. “The nerve of that Jane May, strutting through here wearing that red hat that everybody and his cousin know Ed Earl bought for Sue Mary.” And everybody’s cousin is everybody else’s cousin.

Sometimes it’s like that in District 14. Everything is a symbol or a tell for something else. People cherish and preserve old feuds and can recite them like the begets and begats of the Bible.

The third rail in District 14 — the topic that lights everything up if anybody even touches it — is an issue that isn’t even in District 14, the Trinity River toll road. It’s not in East Dallas, because it’s not anywhere. It’s not even real, but it’s the one issue that makes everybody in East Dallas want to pull out a folding knife and carve off somebody’s nose. Like that red hat.

The Trinity River toll road is a proposed limited access high-speed highway along the Trinity River downtown, about which the city has been arguing bitterly for 20 years. The people who like the idea of building a new expressway on top of the river downtown tend to be of an older culture strongly associated with the automobile and air conditioning. The people who hate the idea are younger and of a culture more associated with hiking and dirt bikes.

The older culture tends to be centered in North Dallas and the enclave suburbs of Highland Park and University Park (the bubble). The hike and bikers are strong in East Dallas but also in North Oak Cliff and other parts of the city, including some neighborhoods in North Dallas.

A person running for office in East Dallas who won’t say where he stands on the toll road is like somebody wearing a red hat. The toll road is the biggest reddest hat of all. It is a big thing the old elite vowed years ago they would do. If they can’t do it now, then their power and glory must be gone, their day of rule over and done with.

The opposition to the old elite, now made up mainly of new young urbanites, is scattered across the city in various venues, but it started in East Dallas, and it’s still fair to say East Dallas is the headquarters. The day the opposition is able to kill the toll road dead, the opposition will no longer be an opposition. On that day it becomes the new ruling class, the young elite who will run the city.

Here’s what’s weird this time around. Both of the main two contenders, Philip Kingston, who is the incumbent, and Matt Wood, a newcomer to office-seeking, swear they are opposed to the toll road. But nobody knows if they can believe them.

Last week when I met with Wood, he told me he adamantly opposes the toll road. He said the only access road he could agree to for a park along the river would have to be equivalent to Lawther Road around White Rock Lake — a sight-seeing road, too slow and twisty to work as a pass-through or shortcut.

Wood also has a plan in mind for diverting the state highway money that would have been used to build the toll road, spending it instead to put portions of Interstate 30 in East Dallas below grade like Central Expressway through the M-Streets/Park Cities area. He believes the at-grade expressway that exists now along the southern border of East Dallas has cut off growth, prosperity and neighborhood strength for the area south of the expressway.

That would seem pretty clear, right? He opposes the toll road. He knows what he wants instead. He even has a plan to take money away from the toll road and spend it elsewhere. How much less red hat than that can a guy be?

Less. It’s East Dallas. There’s a difference between no red hat and no red hat, not now, no-how, never.

Kingston, elected to the council in 2013 after more than a decade of community involvement, has been a principal warrior against the toll road, inheriting that mantle from his predecessor on the council, Angela Hunt. Almost every year he has been on the council, the old guard has launched some new effort to get the toll road done, and every year Kingston has been a key element in making sure they were stopped. So he’s got some scars on his face and some medals on his lapel.

Full disclosure: I live in District 14. I did not call Kingston — swear — when we were locked in an impossible snarl with the gas company and the water department, and we couldn’t get anything done, and our gas appliances were spitting water out of their burners instead of flames. But my wife did.

We and our neighbors had been going around and around with this for weeks. After people started calling Kingston’s office, the next thing we all knew we had gas company trucks and water department trucks and crews up and down the block for two months until it was all fixed.

My impression is that Wood could be like that, too. He strikes me as a persuasive person who could bring down the hammer if needed. But I already know Kingston. He is extremely effective on City Hall stuff when you need him to be.

So how to tell the difference? How to make a choice? This is so arcane I’m almost ashamed even to bring it up, but the battle over the toll road has now settled into a debate on wetlands versus pergolas.

Kingston is strongly allied with a concept put forward recently by Hunt, his predecessor, to create a true nature park along the river. Not coincidentally, the Hunt concept, called the “Balanced Vision Plan,” would rule out the toll road.

A committee of allies of the mayor is paying for an attack ad campaign against incumbent Philip Kingston.
for our community
The old elite led by Mayor Mike Rawlings has put all of its own chips on a competing, more conventional park plan with fountains and pergolas that would accommodate the toll road. Kingston strongly opposes the pergola plan. The mayor, by the way, strongly opposes Kingston and is backing Wood for his seat. The swamp versus pergola thing has everything to do with that.

Wood and I spoke over coffee and tea for about half an hour, and I think I asked him every four and a half minutes how he feels about the toll road, like, “Oh, I can’t remember if I asked you this already, how do you feel about the toll road?” Every time he emphatically opposed it.

But when I asked him about which of the two park plans, nature or pergola, he would endorse, he said, “This may annoy you, because I probably have this answer for a lot of things, because it’s truly who I am, but I am not sure it’s an either-or scenario.”

He said he likes some aspects of the Hunt Balanced Vision concept, but he said he also has looked at the mayor’s pergola plan. “It at least interests me.”

Me, I think it’s either-or. It’s not really about nature or pergolas. It’s the hat. The mayor’s park plan is a Trojan horse designed to stall everything until he and his allies can find $2 billion for the toll road. At least that’s what I believe.

I said to Wood that if he is open to the mayor’s plan for a park, “then you’re open to an idea that would accommodate a toll road.”

He looked me in the eye and said, “I would fight a toll road tooth and nail.”

Then there is this: The mayor’s well-heeled allies from the old school are funding a richly financed attack ad campaign against Kingston, run by Mary Woodlief, the political consultant who covered up for former District Attorney Susan Hawk last year when Hawk was AWOL with mental health issues. I asked Wood about it. He said he has nothing to do with it.

I don’t think I have any smoking guns to offer here. I know people who have worked with Wood on school and neighborhood issues and they tell me he’s a great guy. But I have seen Kingston in action over four years at City Hall, and I know what kind of guy he is — tough, smart, not afraid to take on the mayor and his check-writing pals.

Wood’s waffling on the park plan is concerning, but I’m too embarrassed to offer it here as a serious argument for anything, because that would be just too East Dallas deep-in-the-weeds hillbilly, and nobody outside of District 14 would even get it.

So let’s say this. The city is on the very verge of a huge change, a generational turnover of power and culture. That’s the hat. District 14 voters will have to make up their minds on that basis. And then we can cut each other’s noses off — that’s the part we really live for anyway.