U.S. Rep. Mayra Flores represents Texas' 34th Congressional district. Photo by Andy Feliciotti on Unsplash
When Mayra Flores, a Latina Republican recently elected to Congress, went on Fox News earlier this week, she snapped back when her interviewers asked whether she supported the QAnon conspiracy theory.

Flores, who announced she was joining the House Committee on Homeland Security this week, represents Texas’ 34th Congressional District, which covers areas along the Gulf Coast and in the Rio Grande Valley, including Brownsville. 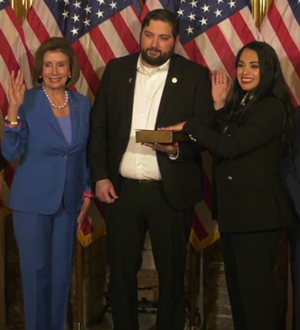 "I am glad to announce I was selected to be apart of the House Committee on Homeland Security and House Agriculture Committee for the 117th Congress," she tweeted on Monday.

She has shared QAnon-related hashtags on tweets in the past. “I’ll say it over and over: It was a hashtag, and my post was actually against it,” she said of QAnon. “I’ve never supported any of those conspiracies and none of this nonsense.”

Confession: Here at the Observer's office, we sat around, scratched our heads and wondered whether that explanation seemed a bit off.

After all, the tweet Fox aired on the screen said only: “Demand voter ID NOW!” After that, several hashtags followed, including #q and #qanon. (If you failed to spot the anti-conspiracy theory message in a tweet seeming to imply widespread voter fraud, well, you’re not alone.)

“Why was it included in the tweets, though?” one presenter asked. “It was an account obviously managed by you; why was it even included?”

But it wasn’t the only time she’d shared conspiracy theory-related tweets. In an article published last year, Media Matters for America archived several now-deleted Twitter, Instagram and Facebook posts in which she used QAnon hashtags.

In 2021, the day after Trump supporters carried out the Jan. 6 Capitol riot, she retweeted conservative activist David J. Harris’ post claiming the whole storming the Capitol thing to prevent certification of the election results was a left-wing hoax, according to CNN.

On the day of the riot, she had also claimed that the riot “was surely caused by infiltrators,” CNN noted.

Conspiracy theories or not, Flores will be joining the Homeland Security Committee. This week, U.S. Rep. John Katko, a Republican from New York, welcomed her with a statement.

“Representing the hardworking people of the Rio Grande Valley (RGV), she has seen firsthand the devastating impacts the Biden Border Crisis is having on border communities and Americans,” Katko said. “She brings a breadth of experience and a unique perspective on border security from which the Committee will benefit greatly.”

Katko’s probably right about that whole “unique perspective” bit, but at least her new gig isn’t all that important. It’s only homeland security, after all.
KEEP THE DALLAS OBSERVER FREE... Since we started the Dallas Observer, it has been defined as the free, independent voice of Dallas, and we'd like to keep it that way. With local media under siege, it's more important than ever for us to rally support behind funding our local journalism. You can help by participating in our "I Support" program, allowing us to keep offering readers access to our incisive coverage of local news, food and culture with no paywalls.
Make a one-time donation today for as little as $1.