The pandemic has been tough for those staying in senior living facilities. Photo by Joshua Hoehne on Unsplash
Santa came early this year for seniors residing at Blessing Court, an independent living facility in Bedford. Residents have been gifted smartphones, allowing them to connect with friends and family during the pandemic.

Resident Donna Turner has largely been isolated because of COVID-19, but earlier this week, she was able to see her daughter for the first time since last Christmas thanks to her new phone’s video chat function.

“It’s just a blessing!” Turner says with a laugh. “I just love the phone because I’ve never had anything like this before.”

Consumer Cellular, a postpaid virtual network operator, has provided 1,000 cellphones to senior living residents who live in affordable housing throughout Texas and Ohio, according to a news release. These National Church Residences properties are part of the AARP Foundation’s Connect2Affect Connected Communities program, which works with affordable senior housing providers to supply residents with tools, devices and training to help them remain independent. 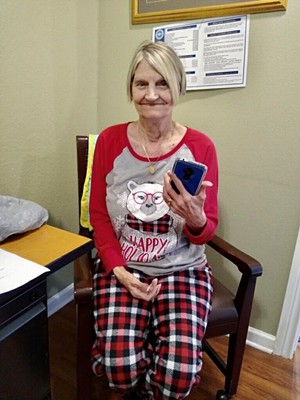 Donna Turner loves using her phone to chat with family.
Courtesy National Church Residences
Adriana “Cookie” Langlais, Blessing Court’s service coordinator, says she’s been distributing Consumer Cellular smartphones to residents since mid-August. Although she had 100 Motorola G7 Androids in total, so far, around 37 residents have asked her for a phone; moving forward, she expects more will express interest.

Seniors get the cellphones for free, and they are also provided with free service for a year, on top of 35 gigabytes of data, Langlais says. It’s a stark shift, considering most seniors living at Blessing Court only had government-issued or flip phones prior.

“It’s just a wonderful phone, it’s a good phone for anybody to have." – Donna Turner, Blessing Court resident

Even though some residents were intimidated by their new cell, Langlais says they were excited to learn to use them at the same time. The stereotype that the elderly don’t want to adapt to new technology is the “farthest from the truth.” In her experience, Langlais says they just need a little extra time.

Langlais says some residents have figured out how to order items from Amazon or even communicate via WhatsApp with family members living in countries as far away as Russia. Others enjoy attending church virtually, too, which helps with religious residents’ mental and emotional health.

“It’s giving them a lot of different pieces to keep them active and happy during this time during the holiday season,” Langlais says.

Around 249 smartphones have been donated to seniors living in Dallas-area care facilities.
Courtesy National Church Residences
“It can be a really lonely time for them, so these phones can help with video calling family and friends who may still only live 20 minutes away but can’t get out to see or don’t want to risk that chance,” she continues.

Turner says she’s had fun learning to navigate her phone’s various applications, and she enjoys using it to watch one of her favorite movies, Heartland. She also plans to view some Christmas cinematic classics on her cell.

Turner says she also loves attending virtual sessions at First Baptist Church of Hurst and hopes to tune in for its Christmas Eve and Christmas Day services.

Over time, Turner has learned how to text, take videos, search on Google and listen to songs online. Although she knows “just about everything else,” she says she looks forward to figuring out how to send videos to friends and family next.

“It’s just a wonderful phone, it’s a good phone for anybody to have,” Turner says. “If they’ve never had one, they really need to get one, because they just don’t know what they’re missing.”
KEEP THE DALLAS OBSERVER FREE... Since we started the Dallas Observer, it has been defined as the free, independent voice of Dallas, and we'd like to keep it that way. With local media under siege, it's more important than ever for us to rally support behind funding our local journalism. You can help by participating in our "I Support" program, allowing us to keep offering readers access to our incisive coverage of local news, food and culture with no paywalls.
Make a one-time donation today for as little as $1.