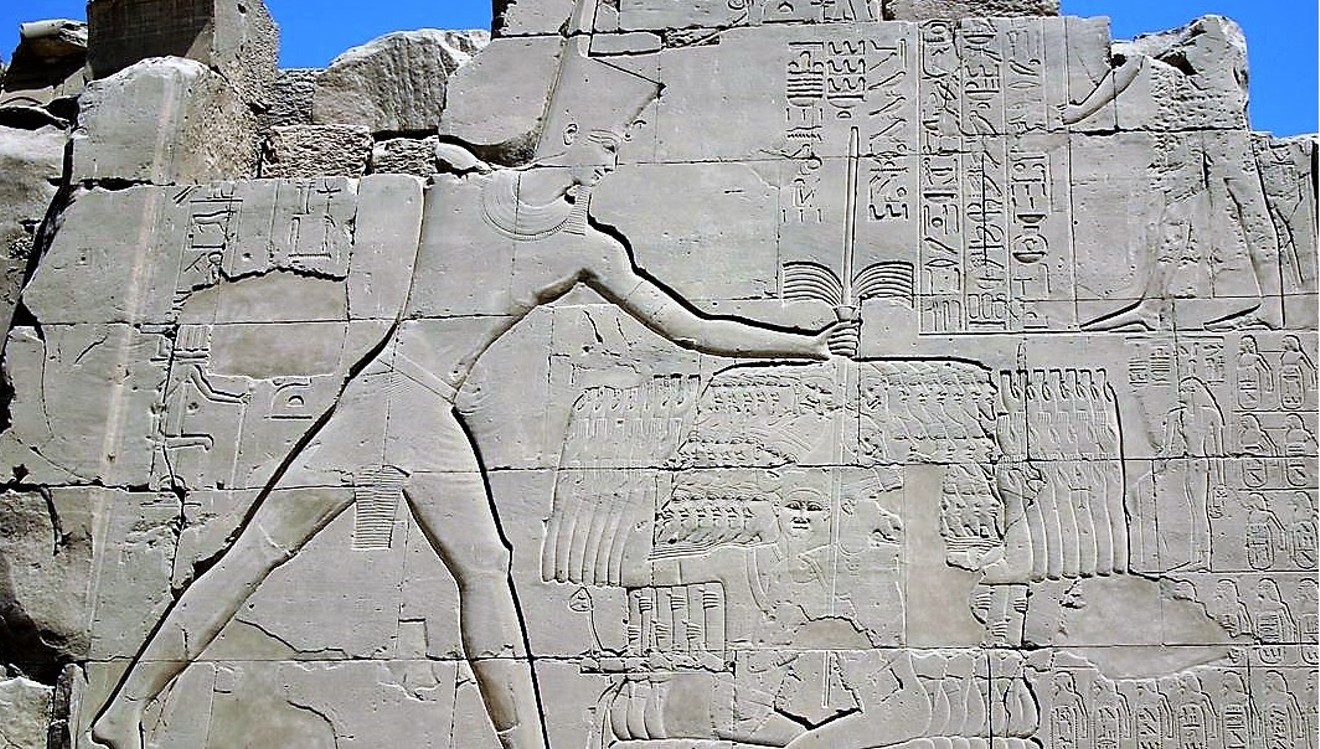 Pharoah Thutmose III in 1450 B.C. pioneered the art of pulling tricks on Joppa. en:User:Markh, Wkipedia
Pity Joppa. With a deep, proud history as a living, breathing freedman’s town, this little gathering of 500 souls in a crook of the Trinity River five miles southeast of downtown is one of the city’s most impoverished places. Still, so many powerful people are always trying to rob Joppa, you’d think it was the mint.

Freed slaves founded Joppa, named for a city in the Bible, after the Civil War. Residents have always called it Joppee. The biblical place, originally the Canaanite city of Yapu, is now Jaffa, a district of Tel Aviv. Over the eons, it has been called Japho, Joppe, el-Qal'a, Tel Aviv, 'Yafa, Yafa el-'Atiqa and Yafo.

An Egyptian legend from the 15th century B.C., now partially supported by archaeology, is that Pharaoh Thutmose III captured Joppa by sending to the city a caravan supposedly bearing large bags of gifts — a little something from Thutmose to Joppa. Once inside the city’s walls, the big bags turned out to bear soldiers, who jumped out and started slitting everybody’s throats.


Freed slaves founded Joppa, named for a city in the Bible, after the Civil War. Residents have always called it Joppee.

The three main characters warring over Dallas’ Joppa today are southern Dallas City Council members Dwaine Caraway, Tennell Atkins and Kevin Felder, or, as I think of them, Thutmose IV, Thutmose V and Thutmose VI. And don’t anybody open that birthday present.

The City Council will vote Wednesday on a new cement batching plant that would be built, with permission, in the industrial zone that is cheek-by-jowl with Joppa, in the crook of Interstate 45 (to Houston) and U.S. Route 175 (to Kaufman). On Monday, The Dallas Morning News published a killer story by Miles Moffeit, Holly Hacker and Tristan Hallman on a shady money deal that Caraway set up several years ago in Joppa.

Back then, another company, Austin Industries, not the cement plant people, was seeking a zoning change in Joppa. Caraway arm-twisted that firm into paying tribute to a Caraway crony. She was a serial bankrupt and, oops, later couldn’t find her records for what she did with $72,000. Eventually, Austin Industries cut her off. As soon as I read the story, I contacted a principal in the matter who confirmed for me the legitimacy of some of the key documentation, including a letter reproduced below.

The arrangement set up by Caraway was within the letter of the law, at least by intent and according to the stated purpose. But it was also a perfect example of the soft corruption by which too many southern Dallas elected representatives have for too long sold their constituents down the river for cheap.

In 2008, Joppa was in Caraway’s council district. Days before he cast his all-important vote for an asphalt batching plant to be built there, Austin Industries, the company seeking the zoning, made a donation to a community group sanctioned by Caraway — the outfit that subsequently misplaced the $72,000.

This greasy commerce — a barely disguised system of vote-selling — not only operates in the light of day in this city but is taken as a matter of right. Felder, who now represents Joppa, never misses a chance to tell any corporate citizen seeking anything from him that it could “do more,” for which you need to picture the thumb and second finger rubbing together in the universal gesture for money.

It’s hard to blame Austin Industries for agreeing to the Caraway rake-off in 2008. It is simply fact: Nobody does any business in any industrial zone in this city without paying some fool some kind of money. At least when people went to Austin Industries and said the money was going down a rat-hole, it closed its checkbook. Other companies would just have put money down more rat-holes.

The pathetic thing now is that Joppa, as if it were not already beleaguered by history, is dealing with serious issues, some bad, some good. Habitat for Humanity has carried out a significant housing effort that is attracting new residents. That’s good.

But at this Wednesday’s council meeting, the most influential and respected clean air group in North Texas, Downwinders at Risk, will present recent findings showing that Joppa residents are already in physical danger from industrial pollutants. The new cement plant, Downwinders will argue, would be the straw that breaks Joppa’s back.

The Dallas City Council normally defers to each council member on zoning questions within that member’s district. That means any industry seeking a zoning change for a new plant is totally at the mercy of the member in whose district it wants to build. Without that member’s vote, nothing can happen.

The arrangement puts tremendous leverage in the hands of the council member. And, once again, please picture the thumb and second finger.

Joppa is now represented by Kevin "You Can Do More" Felder, who has been on so many sides of the current cement plant issue that he is now described behind his back as “The Shape-Shifter.” When this article went online, Felder appeared to be solidly against the cement plant, having sent a letter to principals in the matter saying he would never allow them to do anything in his district again.

That might look like a good thing, given the warning from Downwinders, but the problem is that Felder is crazy. I wrote about Felder in January when he asked police to come to a community meeting he was chairing on the cement plant issue. The police had to explain to Felder that they could not arrest people in a city-owned building on a charge of disagreeing with Kevin Felder.

He pulled a similar stunt again last week, first by hosting another cement plant meeting in a church, as if that would solve the city-owned building problem, then by threatening to call police again when a speaker said something with which he disagreed. The speaker left voluntarily to save everybody, including the cops, the embarrassment of a repeat.

I did a very quick, informal poll yesterday of council members who might also oppose the cement plant zoning on environmental justice grounds to see if they will support Felder. The response was, “Support him what?” The ones I checked in with are, indeed, opposed to the cement plant, but they told me on a not-for-attribution basis before the vote that they have no idea which way Felder will jump once that agenda item is actually before the council.

That game is not just for fun. A person involved in the negotiations over the cement plant, also speaking to me on a not-for-attribution basis because she didn’t want to jeopardize the negotiations before the council vote, said the effect of a no vote will be simple and clear. The two corporations pushing for a yes vote, Martin Marietta and Union Pacific, will shift their sights to locations in Caraway's and Atkins’ districts.

The Morning News story Monday indicated Caraway is already leaning on Marietta to enter into talks with a new group operated by the same woman who lost the $72 grand from his 2008 zoning deal for the asphalt plant in Joppa. New deal, same old rat-hole.

Dallas City Council member Kevin Felder, "The Shape Shifter."
dallascityhall.com
And look at it this way. Here we have this tiny community with roots to emancipation, having survived a century and a half and now on the cusp of an economic revival. What greater engine of respect, what more valuable civic asset could this city earn or devise for itself than a fully realized and successful Joppa? But here we have also these three small-time pharaohs, Thutmoses IV, V and VI, all playing tricks on each other and tricking Joppa so they can steer some two-bit juice to their cronies.

This is the same pay-the-toll mentality that killed Richard Allen’s Inland Port project in southern Dallas nine years ago. Then, it was the county’s most powerful African-American elected official, Dallas County Commissioner John Wiley Price, conspiring with Allen’s main competitor to kill what should have been the biggest economic generator ever in southern Dallas, all done so that Price could steer some two-bit contracts to his cronies.

The bitter nut at the heart of this mentality is a belief that two-bit juice is the best anybody in the city’s segregated southern hemisphere can hope for. Better a drop of juice than nothing.

It’s a worldview that doesn’t only harm southern Dallas residents. Unless we all intend to return to farming, industry will continue to be the backbone of our national economy and the mainspring of the regional economy. Over time, the toll-taking rat-hole system only pushes industry out of the city, and, guess what, that’s a bad thing.

But there’s an upside in this saga: The investment by Habitat for Humanity, the support from Downwinders at Risk and vigorous new activism within the Joppa community on the cement plant issue all are indications that people are taking Joppa seriously. Not everybody is out to play a trick on Joppa and bleed it for its last drop of blood.

Among many mentions in the Bible, Joppa is the place in the Book of Acts where the people have called the apostle Peter to the side of a woman of good works. She has just died: “But Peter put them all forth, and kneeled down, and prayed; and turning him to the body said, Tab'itha, arise. And she opened her eyes: and when she saw Peter, she sat up.”