Want a Contract with A&M? Be Ready to Sign a Pro-Israel Loyalty Oath. 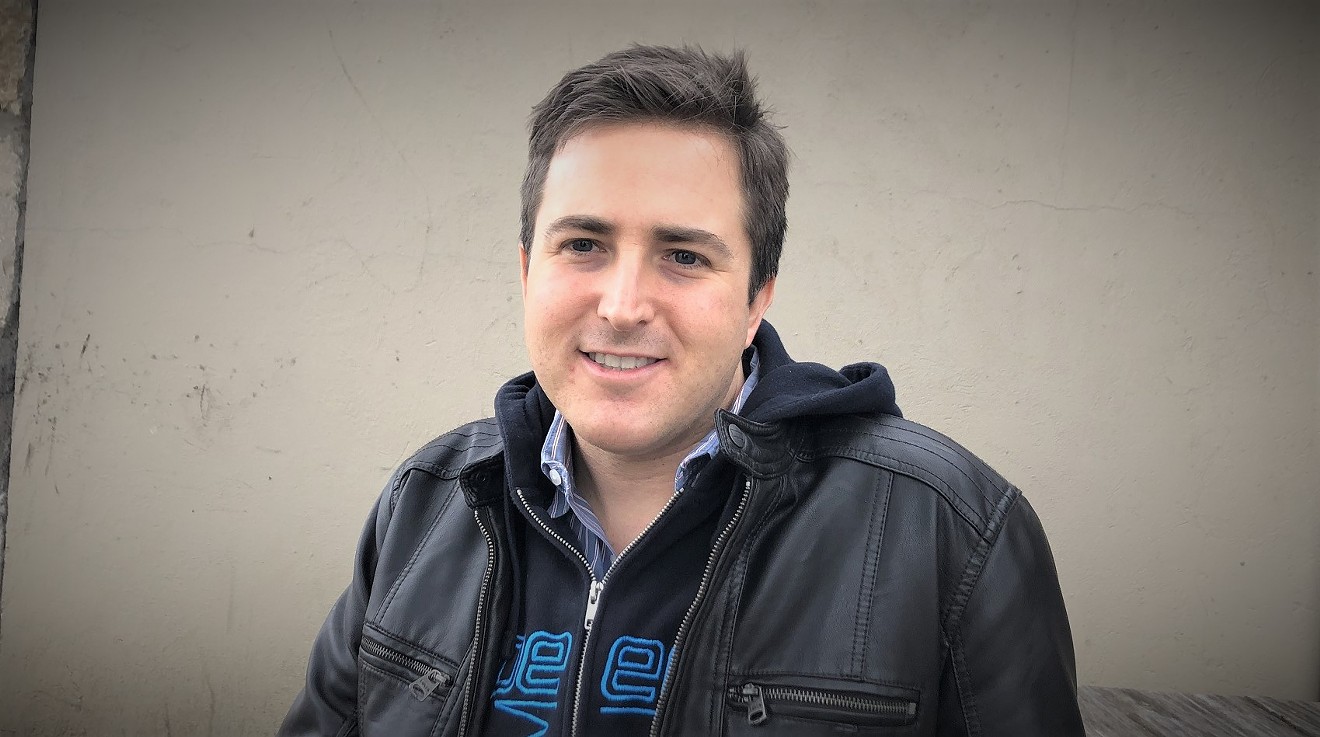 George Hale, Dallas-based freelance journalist Jim Schutze
In August 2018, Texas A&M University-Commerce gave George Hale a choice: 1) Sign a loyalty oath swearing he would never join or support a boycott of Israel, 2) Lose his contract to continue working on an award-winning podcast about unsolved crimes in Texas for the public radio station associated with the university.


“The short answer is that I believe Palestinians are entitled to the same rights as the rest of humanity. Everything else follows from that simple premise.” — George Hale

Israel has nothing to do with Hale’s podcast, called Buried, which I have written about before. But before Buried, Hale was a reporter in the Middle East from 2008 to 2016, working for several news agencies, filing stories from Israel, the Palestinian territories, Egypt and Jordan.

He balked at signing an oath at A&M last year that would force him to forfeit his First Amendment right to express himself on issues of which he has firsthand experience. But he didn’t want to abandon the podcast, which has garnered multiple press awards. So he attempted to sign under protest, inking a notation in the margin:

“I have made my disagreement with the following clause clear. I am signing this contract under protest because it includes the clause.”

But no dice. Brian A. McGinley Jr., assistant director of procurement for Texas A&M-Commerce, sent the contract with Hale’s marginal notation back to Hale’s liaison with the university with an email saying, “He can sign a clean copy or he won’t work. We are not forcing him to sign under duress or protest.”

I could be wrong, but I think that email meant, We are in fact forcing him to sign under duress, but we are not going to let him create a written record of our duress. So, under duress and not wanting to let his co-workers down, he did it. He signed. But he’s not happy. Now he is suing.

Hale is one of four plaintiffs who have joined the American Civil Liberties Union in a lawsuit against several government agencies that demanded the plaintiffs sign the pro-Israel loyalty oath, and before we go another inch with this, let’s be clear about one thing. In requiring the pro-Israel loyalty oaths, all of those entities were doing what they are required to do by Texas law.

In 2017 the Texas Legislature enacted a law requiring all persons signing a contract for work or business with the state to sign an oath vowing they are not now engaged and will not in the future engage in any boycott of Israel or its territories. If you yourself wanted to contract with any entity that falls within state government, you would have to sign the same oath. It means promising, among other things, that you will never speak in support of a boycott of Israel or make a personal decision not to buy an Israeli-made product based on political reasons.

Hale tried to sign under protest with a marginal notation.
Pacer
Maybe I don’t even have to make the other thing clear. You already know, because everybody knows, that there is seldom anything simple in issues touching Israel, the Middle East or anti-Semitism. If those things were just easy, we would have figured them all out about 2,000 years ago.


“He can sign a clean copy or he won’t work. We are not forcing him to sign under duress or protest.” — Brian A. McGinley Jr.

The Texas law, echoed in similar laws in several other states, is an effort to combat a global anti-Israel movement commonly called boycott, divestment and sanctions, or BDS, designed to exert economic pressure on Israel to accede to three demands: an end to the occupation of the West Bank, equal rights for all Palestinian citizens of Israel and the right of return for all Palestinians.

A federal law being considered by Congress would make boycotts of Israel and certain kinds of anti-Israel speech a crime. We’re not there yet, but the entire fabric of the new laws at the state and federal levels directly challenges what courts have long upheld as a core principle of constitutionally protected free speech in America — that economic boycott is a form of protected free speech. The argument supporting the national effort to criminalize anti-Israel boycotts is that these boycotts are not constitutionally protected speech but a tactic of terrorist groups amounting to economic terrorism, not speech.

The ACLU lawsuit filed in federal district court in Austin argues that not even the most intensely unpopular opinions can be used to justify the amputation of the fundamental constitutional guarantee of free speech. The ACLU brief quotes a 1943 Supreme Court decision, which found that students have a legal right to boycott the saluting of the American flag: “If there is any fixed star in our constitutional constellation,” the court said, “it is that no official, high or petty, can prescribe what shall be orthodox in politics, nationalism, religion or other matters of opinion or force citizens to confess by word or act their faith therein.”

Imelda Mejia, spokesperson for the ACLU of Texas, told me that in its lawsuit the ACLU is not taking a position on Israel or the anti-Israeli boycotts. “What we are focusing on is not whether you are for Israel or against Israel or any of the actual boycott issues. Our bottom line is that this is against someone’s First Amendment rights.”

Hale says his own interest in the lawsuit and his reasons for joining it as a plaintiff do not go outside American constitutional questions. But for him it’s complicated, because he does have personal feelings and convictions that reach beyond the lawsuit.

“Back to why I support BDS campaigns,” he told me in an email after we met for coffee. “The short answer is that I believe Palestinians are entitled to the same rights as the rest of humanity. Everything else follows from that simple premise.”

He sent me the email after we met one afternoon at Barbec’s in East Dallas near both our homes, because he felt I had guided our conversation that day a bit narrowly and maybe a bit too brusquely toward the question that was salient in my own mind: How do you even raise questions about Israel without traipsing, perhaps even unwittingly, into ancient anti-Semitic tropes?

Texas A&M wasn't buying it.
Pacer
Hale explained to me over coffee that he knows many Jews who support him in believing that the anti-BDS laws are unconstitutional. He steered me to an article published last December in the Jewish newspaper Forward revealing a split between the staff of the Anti-Defamation League and powerful ADL board members. In an ADL staff memo obtained by Forward, unnamed ADL staffers argued laws like the one in Hale’s case are “ineffective, unworkable, unconstitutional, and bad for the Jewish community.”

But the ADL continues to give strong official support to the laws. Joshua Shanes, a professor of Jewish studies at the College of Charleston, told Forward he thinks the ADL’s official position is “designed to bolster their credentials among the Jewish right. I’m assuming that it’s a combination of concern about losing donors on the right, and some level of sympathy.”

I can’t help lifting my own eyes from Texas to the national scene and seeing the mess going on now in Congress over remarks by Minnesota Democrat Ilhan Omar. Omar starts out with a fair enough proposition: "I want to ask, Why is it OK for me to talk about the influence of the NRA, or fossil fuel industries or Big Pharma, and not talk about a powerful lobbying group that is influencing policy?”

But then she leaps into a hoary Henry Ford-style anti-Semitic stereotype: "I want to talk about the political influence in this country that says it is OK for people to push for allegiance to a foreign country.”

No one ever accuses the Irish of treason for dancing across the pocked and beaten boards of 1,000 American community theaters singing homesick ballads of Ireland. But American Jews devoted to the well-being and permanent security of Israel are accused of being fifth-columnists.

Yet, this question of the anti-BDS laws seems to turn Omar’s trope inside-out in a very awkward way. The political issue underlying the ACLU lawsuit is not about Americans supporting Israel but about Americans not being allowed to oppose Israel. Are we not free to do both?

At Barbec’s, Hale, whom I have known since he was a kid, tried earnestly to sort it out for me. “The reason I care more about this is because I spent time over there, but it’s definitely a First Amendment issue for me.”

He said he understands from firsthand experience the very real security threats that Israelis live with every day. He lived and worked in Israel for years. He saw missile exhaust plumes outside his office windows in Bethlehem from Palestinian rockets striking less than a mile away. He said he also despises anti-Semitism: “It is not a pleasant thing to be associated with. I reject it. It’s an awful racist movement.”

But in his years in the Middle East, Hale also traveled into the Palestinian territories often for his work. He says he saw biting poverty and despair there. He underwent humiliating strip-searches by Israeli soldiers at checkpoints and felt some of the pain of an occupied people. He thinks Israel, Palestine and the Middle East are topics Americans should feel free to discuss openly, given the powerful role of the United States in shaping events there.

Hale’s podcast, on KETR-FM 88.9 in Commerce, started out with a wonderfully Gothic true-crime narrative of murder and meth in East Texas, exposing how a culture that can shut people up can also bury them. Literally. In a hole. It’s a cautionary tale.
KEEP THE DALLAS OBSERVER FREE... Since we started the Dallas Observer, it has been defined as the free, independent voice of Dallas, and we'd like to keep it that way. With local media under siege, it's more important than ever for us to rally support behind funding our local journalism. You can help by participating in our "I Support" program, allowing us to keep offering readers access to our incisive coverage of local news, food and culture with no paywalls.
Make a one-time donation today for as little as $1.