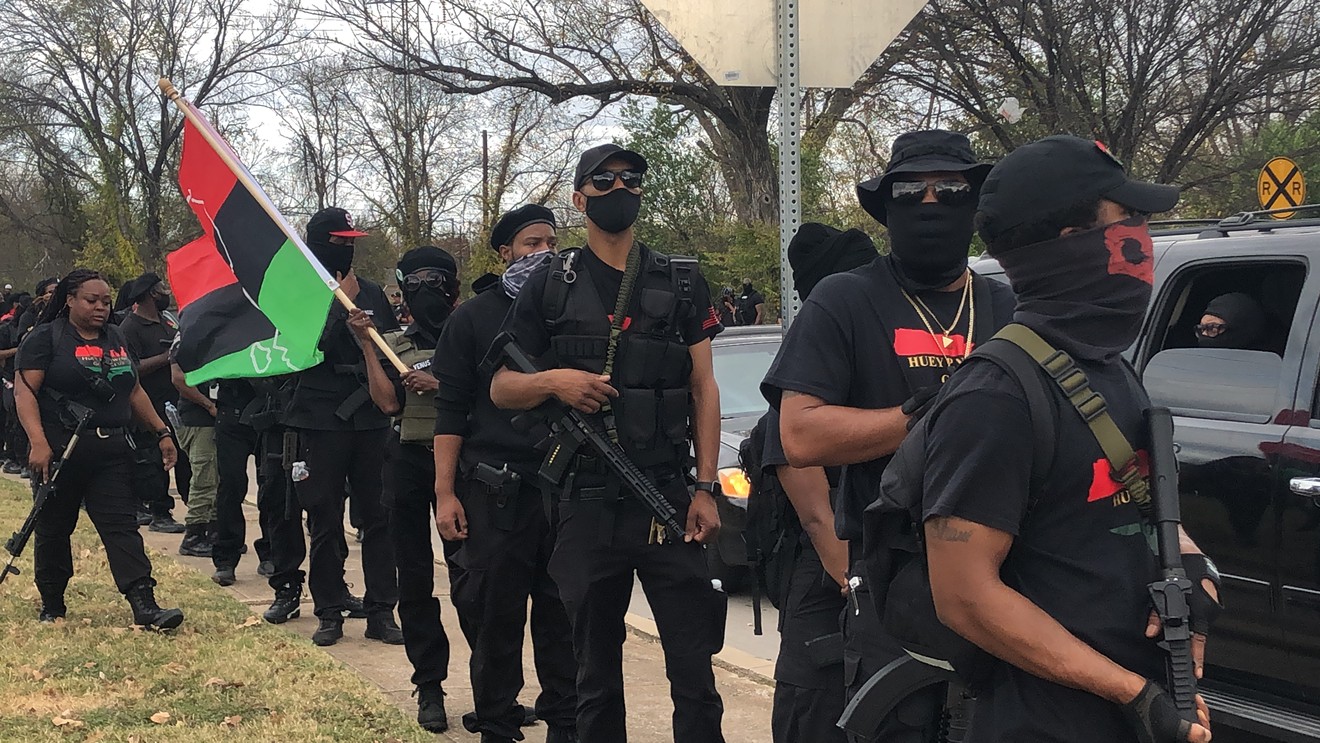 Armed members of various Huey P. Newton Gun Club chapters prepare to patrol in South Dallas. Jacob Vaughn
As President Donald Trump's supporters gathered downtown Saturday to dispute the results of the election, about 200 armed activists patrolled the streets of South Dallas in an attempt to curb violence in the community. Most of the patrollers were with various chapters of the Huey P. Newton Gun Club from across the country.

As they marched with their guns slung over their shoulders, they shouted, “Who protects us? We do!”

Named after the co-founder of the Black Panther Party, Huey P. Newton, community organizers Yafeuh and Rakem Balogun along with Babu Omowale formed the group in 2014. The same year, the gun club gained national attention for their armed protests in Dallas and have organized several community patrols in several of the city’s underserved, high crime areas.

“We wanted to come out here and respond to the violence that has occurred in the community and try to be something positive,” Yafeuh Balogun said.

A resident in one of the neighborhoods the patrollers marched through said she often hears the sound of gunshots ringing out in the community. “We do need to stop the violence,” she said. “Especially with these folks killing each other like I don’t know what.”
By a very small metric, overall violent crime is down in Dallas, but homicides are up, the highest they’ve been in 10 years. The city was in a similar place last year when both the mayor and police chief rolled out their own plans to make Dallas safer.

Around the same time that state troopers were deployed in South Dallas that summer, Yafeuh Balogun, along with activist groups Guerrilla Mainframe and Black Empowerment Movement, stationed themselves in the Highland Park Apartment Complex. The apartments sit in Highland Hills, an area riddled with crime.

Their role in the community was similar to the violence interrupters proposed by the city. According to crime statistics provided to the complex manager by the police, crime decreased during the time the activists were conducting their patrols.

Guerrilla Mainframe and its associate organizations have a history of conducting armed patrols and demonstrations in South Dallas dating to 2008, along with other community work such as food drives, self-defense training and neighborhood cleanups.

But these communities have been working to clean up their own streets for several decades now.

Back in the late '80s and early '90s, crime reached an all-time high, and the number of homicides surpassed 500 in 1991. In 1989, the late activist and community organizer Fahim Minkah organized his AMAN (African Men Against Narcotics) Drug Fighters to help combat the lack of police protection in South Oak Cliff. CBS highlighted Minkah’s efforts in a segment called “The Dallas Drug War.”

Armed AMAN Drug Fighters patrols were conducted in neighborhoods and apartment complexes to force out the gun-toting, drug-dealing gangsters who wreaked havoc on their communities. The group gathered information on local drug pushers and let them know they were being watched. The idea was to harass them until they left town.

Before the patrols in the late ’80s, Minkah said he spent many years as an activist looking outward as he fought for the rights of black people. But after a while, he said he realized he needed to start looking inward, at what was happening to his own community.

“Since 1968, I fought for the freedom of African-American people,” Minkah said. “I fought for freedom and justice for all people, all oppressed people. And, I didn't fight to look around in the same neighborhoods where I waged battle to be taken over by crooks and hoodlums and drug lords.”

Yafeuh Balogun said the Highland Hills patrols were heavily influenced by Minkah. By marching in Dallas over the weekend, he said, he hoped to influence others to do similar patrols and help heal their communities from the inside.

The city will be launching its own violence interrupters program, as recommended by Mayor Eric Johnson’s Safer Communities Task Force. Yafeuh Balogun said he believes these patrols are more successful at curbing crime because they are in touch with the communities they’re deployed in.

At last week’s public safety meeting, City Council member Casey Thomas said that in moving forward with the violence interrupters program the city reaches out to organizations who are already doing work in the communities that need help.

According to NBC, one of the groups involved with the city’s program is Urban Specialists, founded by Bishop Omar Jahwar. They have been conducting patrols and community cleanups in Dallas since early September.

The city interrupters aren’t armed, but they are tasked with building relationships and mentoring people in the community to divert them from crime.
KEEP THE DALLAS OBSERVER FREE... Since we started the Dallas Observer, it has been defined as the free, independent voice of Dallas, and we'd like to keep it that way. With local media under siege, it's more important than ever for us to rally support behind funding our local journalism. You can help by participating in our "I Support" program, allowing us to keep offering readers access to our incisive coverage of local news, food and culture with no paywalls.
Make a one-time donation today for as little as $1.